ANPlan libraries report six significant newspaper finds in 2013/14, three from Victoria and three from New South Wales (NSW). These titles, which were previously not held in any ANPlan library, are listed in Appendix B.

Over the past six years a total of 57 titles, which were previously not known to any library, have been added to the national collection. See Figure 1 below. 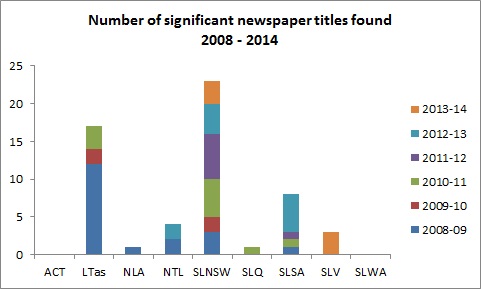 Numbers of newspapers which are known to be entirely missing [1] and which have significant portions missing [2] are summarised in the Table 1 below.

Table 1: Number of newspaper titles either entirely missing or with
significant portions missing in each state and territory.

The titles of newspapers which are known to be missing or have missing portions are published on ANPlan’s website at: http://www.nla.gov.au/australian-newspaper-plan/about/collect.

The number of reported new newspaper titles has increased from previous years as shown in Figure 2. 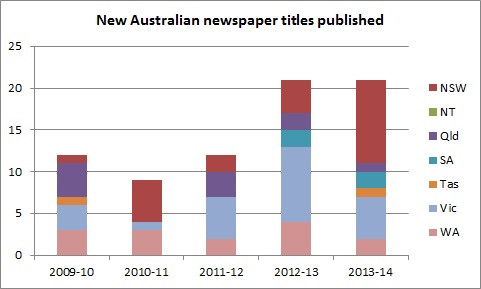 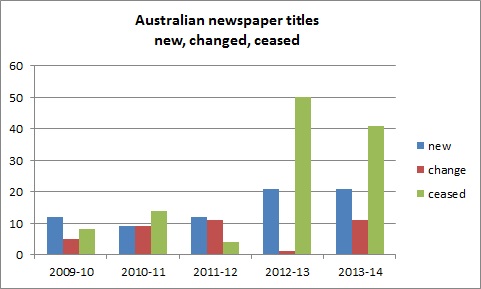 A project undertaken by the NLA in 2011/12 to review the collection and retention of newspapers found that there was scope for the NLA to retrospectively de-select printed Australian newspapers through closer adherence to the NLA’s Collection Development Policy (CDP) and through greater reliance on the provisions of the ANPlan. A repatriation project for Australian newspapers was discussed with the ANPlan partners in October 2012.

The NLA proposed no changes to its collecting of newspapers deemed to be national in scope or considered significant in subject content or recognised as a ‘paper of record’. These would still fall within the scope of the Library’s current CDP. It was proposed that any local, regional or community newspapers identified as outside the CDP and the Library’s responsibilities under ANPlan would be deselected and offered to state and territory libraries to fill any gaps in their coverage of these titles, or to replace copies that may be in poor condition.

The NLA also sought the agreement of ANPlan members to the suggestion that for some regional ‘papers of record’ where either a microfilm or digital copy is available, this surrogate may be considered sufficient for both the NLA’s collection and for national access, and an additional print copy may not be necessary. The Library therefore also proposed offering its print holdings of these titles for repatriation to the relevant ANPlan library. ANPlan gave its in principle support to this approach. Capital city dailies were excluded from this approach, with the NLA continuing to retain hardcopy for these titles.

In early 2013, the NLA provided ANPlan libraries with lists of newspaper titles that the NLA was offering. The NLA also contacted the publishers of newspapers currently received that were identified as out of scope for the NLA’s collection to advise them that they no longer needed to provide these to the NLA under legal deposit due to the cooperative collecting of Australian newspapers under ANPlan, but that they should continue to send a copy to the relevant ANPlan library.

A total of 236 titles were repatriated to the NSLA libraries early in 2014. With 21 titles awaiting repatriation pending the NLA’s receipt of surrogate microfilm, this will bring the total of repatriated newspapers to 257 at the completion of the project. A number of titles, originally proposed for repatriation for which the NLA was unable to purchase microfilm, have been retained in hard copy by the NLA.

[1] Missing newspapers are ones which are missing from all ANPlan libraries both in hard copy and microfilm format.

[2] A ‘significant’ portion is not generally defined by the amount of material which is missing but by its significance to the total collection. The SLNSW has reported titles which have more than 20 missing years missing.

[3] Newspapers which are national in scope, coverage and distribution which the National Library of Australia has assumed responsibility for are: Australian, Australian Financial Review, National Times, Nation Review and Independent Monthly.