In the past ANPlan has carried out search and rescue campaigns to encourage the public to find issues that are missing from collections. During 2014/15 no campaign was held, however ten titles were still identified during the year and added to ANPlan library collections: five titles from Queensland (Qld), one each from South Australia (SA) and Victoria (Vic), and four from New South Wales (NSW).

These titles, which were previously not held in any ANPlan library, are listed in Appendix B.

Over the past six years a total of 67 titles, which were previously not known to any library, have been added to the national collection. See Figure 1 below. 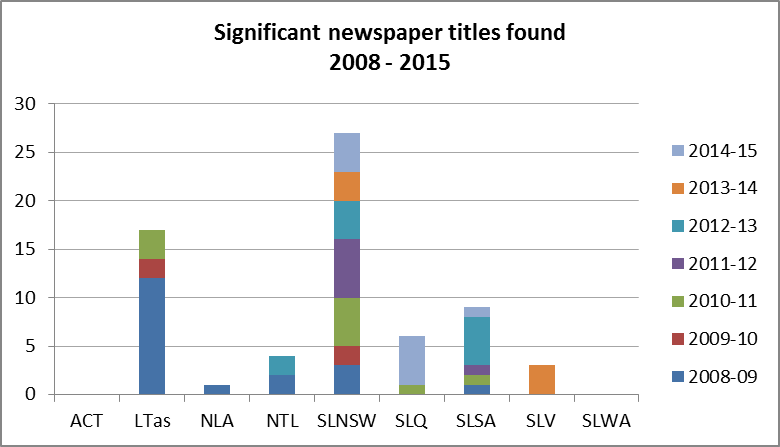 Numbers of newspapers which are known to be entirely missing[1] or which have significant portions missing[2] are summarised in the Table 1 below.

Considerable work has been undertaken by the State Library of Western Australia (SLWA) during the year to quantify the titles that fit into these categories and consequently the numbers of titles have increased.

Table 1: Number of newspaper titles either entirely missing or with
significant portions missing in each state and territory.

These statistics vary as new information becomes available each year.

The titles of newspapers which are known to be missing or have missing portions are published on ANPlan’s website.

ANPlan libraries reported 28 newly published titles during 2014/15, which is a slight increase on the 21 titles reported last year.  The number of title changes this year doubled to 22 and the number of ceased publications was slightly less than last year at 36.

These newspapers are listed in Appendix C and relevant data is shown in Figures 2 and 3 below. 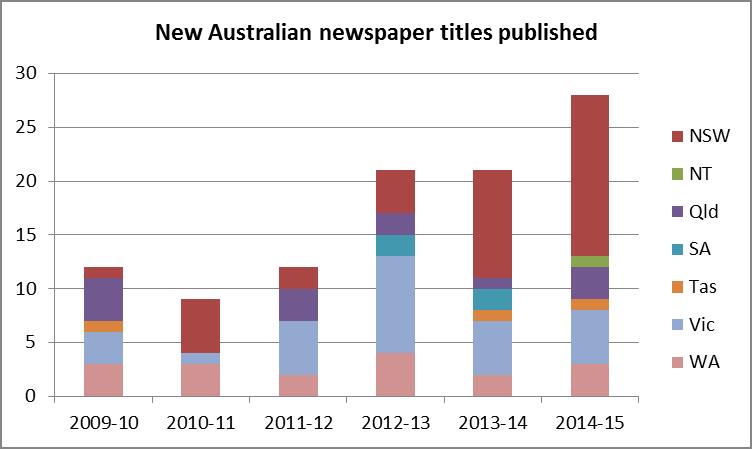 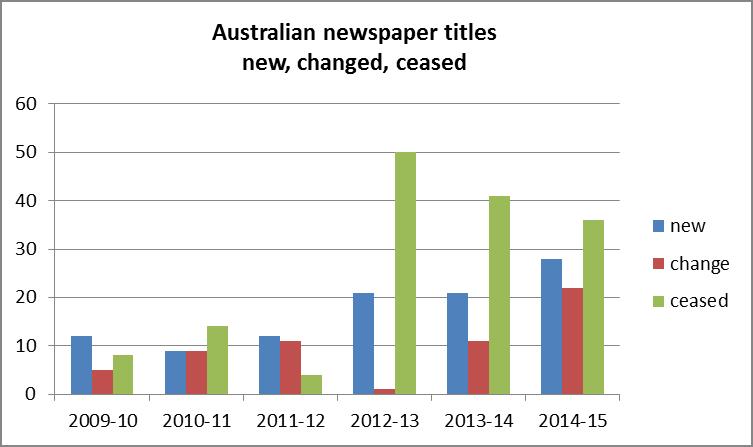 Collection of digital newspapers which have no print equivalent continued with a total of four titles collected during the year (See Figure 4). The NTL collects two titles and SLSA and Linc Tasmania (LTas) collect one title each. This is a slight increase on the titles collected in previous years.

Some newspaper titles are collected as electronic pre-press files in addition to the printed copy. (See Figure 5) In the case of SLSA this pre-press file is used to create the microfilm for that title rather than microfilming the original print copy. See Appendix D. 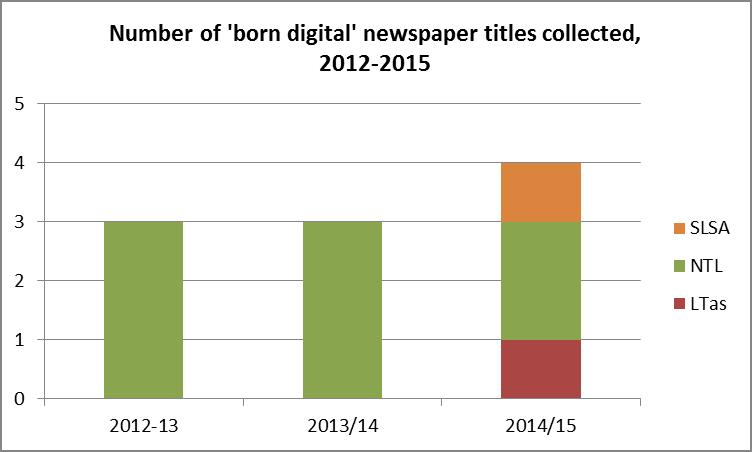 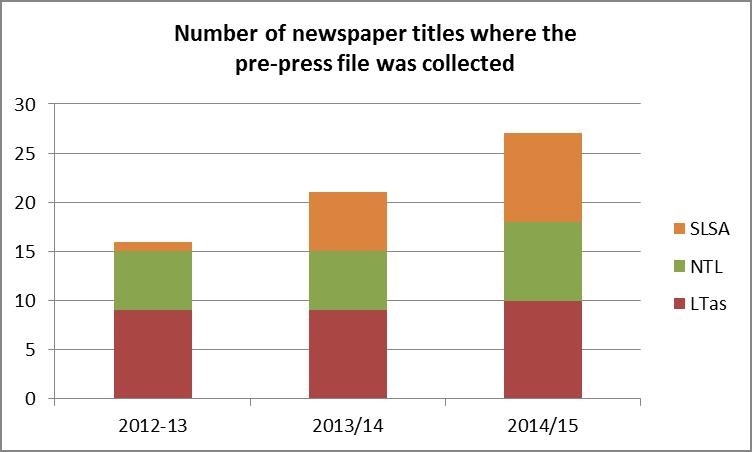 Figure 5: Number of newspaper titles where the pre-press file was collected

The SLQ reported that the only online Queensland newspaper at this time is The Brisbane Times and this title is not collected or managed for preservation/permanent access. It has previously described itself as NOT an online newspaper but a news service.

The weekly harvest of InDaily , SA’s single digital only newspaper identified to date, has been occurring for two years as part of an ongoing trial of the Web Curator Tool. At this stage, the harvests are being done for preservation purposes. Negotiations have not yet begun with the publisher, who retains an online archive for the public, but not in a form that can be harvested.

[1] Missing newspapers are ones which are missing from all ANPlan libraries both in hard copy and microfilm format.

[2] A ‘significant’ portion is not generally defined by the amount of material which is missing but by its significance to the total collection. The SLNSW has reported titles which have more than 20 years missing.

[3] Newspapers which are national in scope, coverage and distribution which the National Library of Australia has assumed responsibility for are: Australian, Australian Financial Review, National Times, Nation Review and Independent Monthly.