Ding-dong, CRASH! Chertsey Abbey, 1370
Through the generous support of donors, the Library’s 2014 Tax Time Appeal is funding a special project to enhance access to our medieval manuscripts 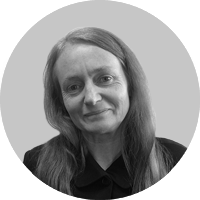 This post was originally written for the regular feature Medieval Manuscripts in The National Library of Australia Magazine. 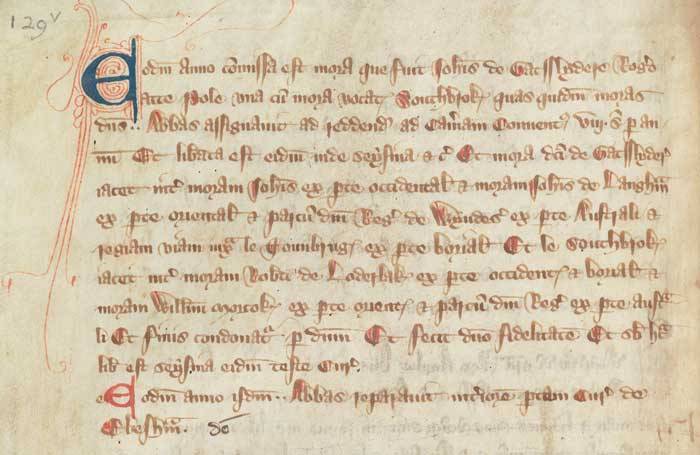 One of the most intriguing medieval manuscripts in the Library’s collection is the Chertsey cartulary. This fourteenth-century compendium contains copies of deeds and other transactions of St Peter’s Benedictine Abbey, Chertsey, Surrey, which was founded in 666.

In the Middle Ages, original records were kept in a monastery’s ‘muniment’ chest. Transcriptions of the documents were made for safekeeping and bound into a cartulary. In the twenty-first century, cartularies provide tantalising windows through which medieval monasteries can be viewed and brought to life once again.

An entry for July 1370 recounts how the mid-summer serenity of the abbey was broken by a thunderous crash, moments after the monks had met in the chapter house for their regular mid-morning meeting:

In the month of July, on Wednesday after the anniversary of St Swithun’s, immediately after Chapter … when the meeting was being held before the coming Parliament, the greater part of our bell tower fell to the ground in ruins, to the irreparable loss of our monastery.

The cause of the collapse—which also broke the bell—is unrecorded, but may have resulted from a lack of maintenance (there was much loss of income due to the devastations of the plague) and a series of violent storms.

Bell towers began to appear in England during the Norman period to sound the nightly curfew (‘cover fire’), a regulation imposed to discourage after-dark gatherings and to minimise the risk of fires spreading at night.

Chertsey Abbey had been damaged by fire in 1235 and Abbot John de Rutherwyk may have been mindful of this when he had a tower built and bell made in 1310, during the peak of its prosperity. According to contemporary accounts, Rutherwyk was a ‘vigorous personality’ who presided over many improvements, ‘draining marshes, erecting mills and stone bridges, enclosing lands, sowing acorns, repairing chapels and farmhouses, sinking wells, building barns’ and constructing one—ultimately unfortunate—bell tower.

In addition to bearing testament to this unhappy event, the cartulary, part of the Library’s Clifford Collection, is significant because it is the only example of a medieval cartulary in the Southern Hemisphere and contains the only known accounts of Chertsey Abbey.

Of particular interest is the high degree of correlation between this cartulary and a ‘sister’ copy held by the British Library. This raises the question: was one volume the original copy on which the other was based? The digitisation of the Clifford cartulary will allow scholars around the world to inspect it more closely and compare it with the sister copy without having to travel to Australia, presenting the exciting possibility that this 700-year-old mystery may yet be solved.