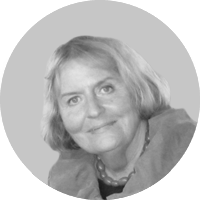 Our Treasures Gallery volunteer, Christine Maher, has become so interested in the life of Richard Brooks, she has written his biography, Richard Brooks: From Convict Ship Captain to Pillar of Early Colonial Australia. The biography will be launched at the National Library Bookshop at 6pm, 11 May—book your tickets. Here she introduces us to the life of a convict ship’s captain.

Convict ship captain Richard Brooks (1765-1833), was a contemporary of many of the people whose manuscripts and paintings are periodically displayed in the Treasures Gallery. 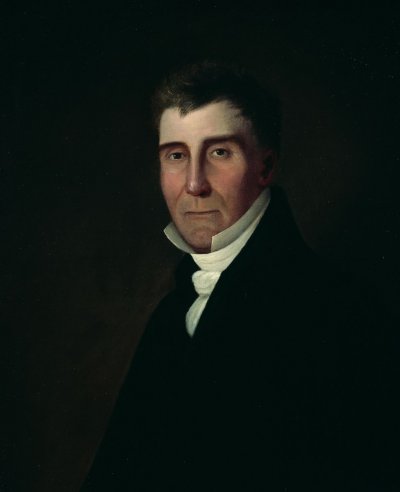 Brooks made six voyages to Australia before settling in 1814. The first voyage he was master of the infamous convict ship Atlas (1802), when a third of his convicts died as they were herded together to make way for his substantial shipment of rum. On his second voyage as master of the transport Alexander (1806), he sailed in convoy with incoming Governor William Bligh, whose 1789 notebook is on display in the Treasures Gallery. Following the 1808 Rum Rebellions, when his ship Rose was impounded by the rebels as an illicit trader, Brooks returned to England carrying Bligh’s secret despatches. He gave a first-hand report of the rebellion to Bligh’s sponsor Sir Joseph Banks, for whom he was carrying a pair of black swans. 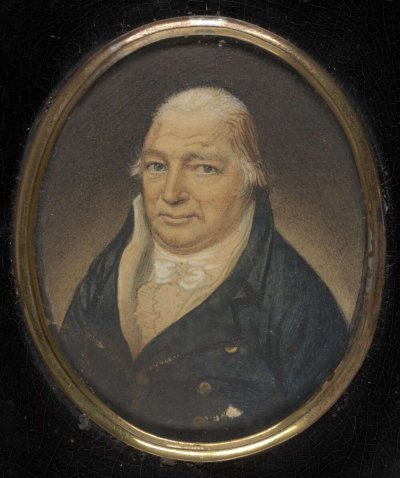 Returning to England in 1813, Brooks was later shipwrecked in the Falkland Islands from where he made an epic voyage in the ship’s longboat to mainland South America to seek rescue for the Isabella’s castaways. You can read the story of the shipwreck and resulting voyage online. 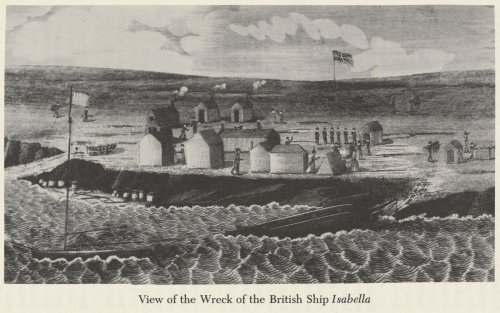 The wreck of the Isabella in the Falklands 1813. Captain C.H. Barnard, Narrative of sufferings and adventures, 1829

Brooks’ acquaintances were a veritable ’who’s who’ of colourful colonial characters from Sir Henry Browne Hayes of Vaucluse, transported for abducting a Quaker heiress to Judge Advocate Richard Atkins, whose journal is sometimes on exhibit and whose estate at Denham Court was transferred to Captain Brooks in repayment of a debt. His portrait—now hanging in the National Gallery of Victoria—was painted by Treasures stalwart Augustus Earle, who completed the Brooks’ family portraits at his estate.

Brooks was the first white settler south of Lake George. The Lake was painted by convict artist Joseph Lycett in the 1820s. From his out-station and convict compound at Bungendow (Bungendore), near Canberra, he sent livestock into the Monaro as he carved out the colony’s first cattle empire. His illegitimate son Richard Brooks Jnr is generally acknowledged as the Monaro’s pioneer settler. 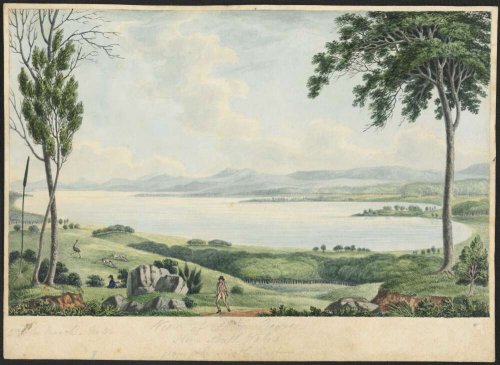 Comment:
Can anyone tell me what the debt was owed by Richard Atkins my ancestor?
Comment:
Off the top of my head Atkins sold his only freshly granted Denham Court to Richard Brooks to allow him to settle his debts, plural. Atkins allegedy liked a drink or two, and this may have been linked with his debts. Macquarie appears to have granted Denham Court to Atkins only shortly before his departure so that he could sell same to settle his debts before going to England re the Rum Rebellion. Did you know that Atkins originally had a Denham Court and a Denham Farm at Parramatta? Ron Madden
Comment:
I bought this interesting book because Brooks was my first family member in Australia (my ancestor was one of his Penson nephews). I suspect the author was briefly a colleague in the Parliamentary Library in the 1970s. Uncle Richard's appalling behaviour on Atlas 1 brought him into conflict with Governor Philip Gidley King; I taught the current Philip Gidley King at UNSW in the 1960s. Sometimes Australia still seems like a small place.
Comment:
The monograph 'Eighteenth century mariners and merchants: the English family background of Richard Brooks and Christiana Passmore' by Richard Lamb has information on the Penson family, into which Brooks' eldest sister Judith Penson married.
Comment:
The original debt was for a tabletop tomb for Atkins' mistress Ann Bockerah or Buckrill, the wife of a convict. The original 26 pound bill blew out to 82 pounds after his titled brothers back in England refused to honour a bill of exchange Atkins drew against them. The full story is in the book.
Comment:
This is one of the most interesting books I've ever read. Richard brooks was my ancestor. Is it possible to get hold of a copy of his atlas 1 log?
Comment:
I have published the log of the Atlas. A few copies are available, they are also available to read in the library and in the rare book section of the Liverpool library, baw2@bigpond.com
Comment:
The National Library holds a microfiche entitled 'Log of the ship Atlas' on AJCP Reel M1625. This is a copy of the original log held in the British Library. Brian Ahern, a descendant of one of the Atlas' convicts has also produced a limited edition facsimile of the log, which is also held by the National Library of Australia.
Comment:
This is a wonderful book. Beautifully written and very illuminating on early colonial social and mercantile life. I would be interested in Christine Maher's comments re whether there were any interactions between Brooks and the lives of Garret Cotter or TA Murray. I suppose also that Brook's Creek which crosses the Federal Highway just before Geary's Gap was named after Richard Brooks? He thus had holdings around there as well as before Bungendore?