There is a flourishing community of Australian comic writers/artists and many fans who appreciate their work. Local comic book stores are hubs of creativity and discovery, but libraries love comics too! The National Library collects comics under Legal Deposit just as we collect newspapers, books, and magazines. They are just as important as any other publication for the Library, and we want to ensure they are preserved for the future and that information about them is made more widely available. That’s how we can help to support the genre (and the fact that our cataloguers have such fun reading them is just coincidence of course!)

It would be safe to say that the majority of Australian comic creators don't know about the National Library, or our comics collections (a shout-out here to Nat Karmichael, whose comments on Alison's stories about the John Ryan collection are greatly appreciated). It’s also true that we don't know about a lot of Australian comic creators. So there are definitely some gaps in our holdings of comics. A lot of Australian creators aren't even published in Australia, because most commercial comic publishers are based in Europe or the United States of America. It’s even more difficult for the Library to find out about these.

So when we heard that the inaugural Australian Comic Arts Festival (ACAF) was being held in Canberra on the 20th-21st of February, we couldn't believe our luck! We knew we'd be able to discover a lot of new Australian comics creators, and pick their brains about how and where they publish, and why. Three intrepid librarians - that's us, Debbie Cox, Nicolette Suttor, and Ros Hirst, represented the Library. Debbie has fun with zines. Nicolette has done marvellous things with our Japanese manga collection, and Ros reads comics, lots of them. We're all passionate about the importance of collecting Australian comics, because we've seen how much of Australia's comic history has been lost already. 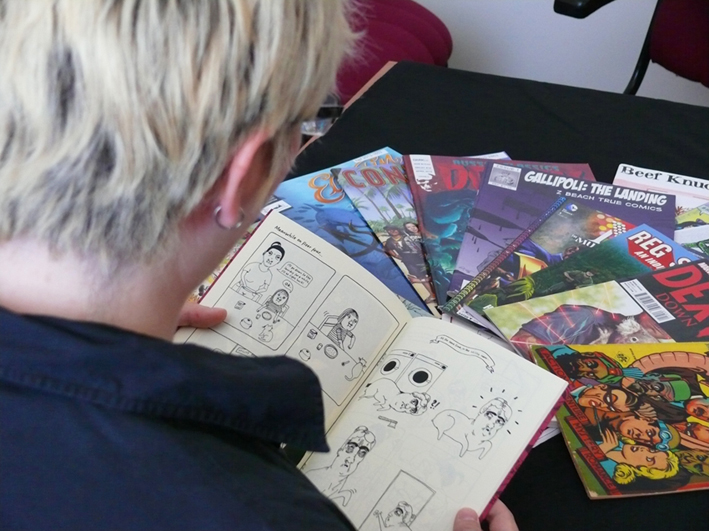 Our mission was to meet Australian comic creators - artists, writers, colourists, inkers, editors, and to acquire some comics for our collection, especially titles that had small print runs or might disappear before we have an opportunity to try and use our normal methods - snail mail is not the fastest communication channel. We also wanted to learn more about how other libraries deal with comics.

Karen Dwarte and Alex Hammond gave a talk on comics in public libraries at the festival that we found particularly interesting. All librarians have had frustrating experiences getting comics into libraries. They often have small print runs, or limited distribution through local comic stores. Companies that sell books in bulk to libraries often don't know which comics suit different types of libraries, and most shops and databases don't record the metadata that can help librarians find local creators in that huge world of bookseller information!

In their talk, Karen and Alex didn't just focus on how much libraries value comics, but what comic creators and publishers can get out of libraries. Public libraries buy comics looking for content, value to the community, local creators, and how long the comics last. Collected volumes and serials that fit in Library-style reading age groups (children, young adult, adult) are exactly what public libraries look for. They will often buy several copies, to serve reader demand.

The National Library on the other hand collects one copy of EVERYTHING under Legal Deposit, we're like a national cultural memory bank. At the National Library we catalogue comics to the same high standard as any other published item, so sending a copy of your comic to the Library means that a catalogue record for it will appear on Trove (and also be picked up in Google). That means comics fans and libraries can discover it, and makes it a lot easier to get your work into other libraries.

A lot of comic creators don't know about Legal Deposit, public lending rights, and educational lending rights. They also don't know about barriers to selling their books to libraries and schools, like knowing how to write an invoice, and which distributors to approach with their work. It was very exciting to see comic creators learning new ways to earn income from people enjoying their work, and to see which titles have enthusiastic readers.

While at ACAF Debbie and Nicolette went to sessions focusing on selling comics to publishers, and American publishing. Being able to hear Australian comic creators discuss how they approach publishers and market their work, opened our eyes to how hard it is for Australians just to get their work out there.

Legal Deposit only applies to Australian publishers, but in addition the Library is very keen to collect all works by Australians that are published overseas. These are very hard for us to track down without some help. We asked some creators we spoke to at ACAF whose work is published overseas, to send us lists of their work, and would be delighted to receive similar lists from other Australian creators. So please spread the word! We even buy single issues from within longer series, if only one or two have an Australian connection.

Thomas Campi and Mark Sexton are two Australian creators who have been published overseas.

At another session we attended, Queenie Chan, a well-recognised name in Australian manga circles, gave an advance preview of Bentonet. Bentonet will be an online retail hub for Australian comics. It will be particularly useful to help libraries order for their collections from small Australian comics publishers. We’re looking forward to seeing Bentonet when it goes live.

Market day at ACAF had writers, artists and publishers showcasing their comics in Artist Alley. It was our job to spend all day talking to people in Artist Alley about their art and stories, and answering questions about the National Library. It was a wonderful opportunity for us to speak with comics creators in person. As cataloguers, we usually only see (and appreciate) their work, but it makes such a difference to talk to people as well. We can’t mention everybody, but here is just a little bit of name dropping. 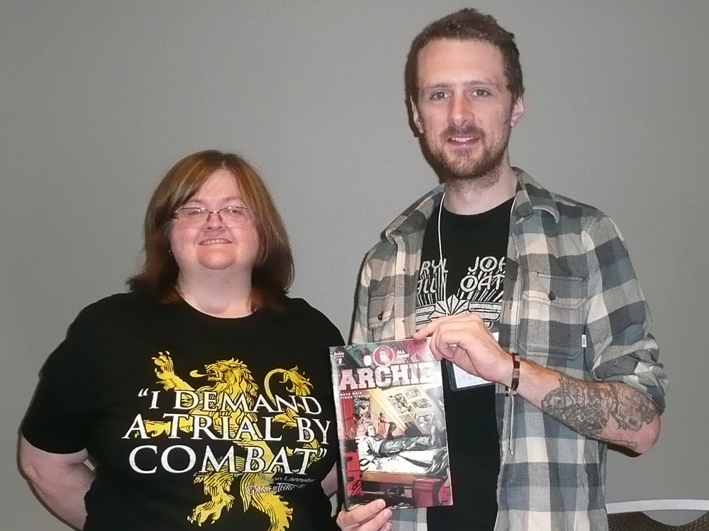 Debbie with Tristan Jones, an Australian who is notable for his work on Ghostbusters, Ninja Turtles, and Aliens, all published overseas.

Ros really appreciated the insights Tristan Jones shared into his career as an Australian who only works in comics published overseas. It was great to meet Brenton McKenna (published by Magabala Books) and Wolfgang Bylsma (editor, Gestalt), because distance has always been a barrier to discovering Western Australians in comics. 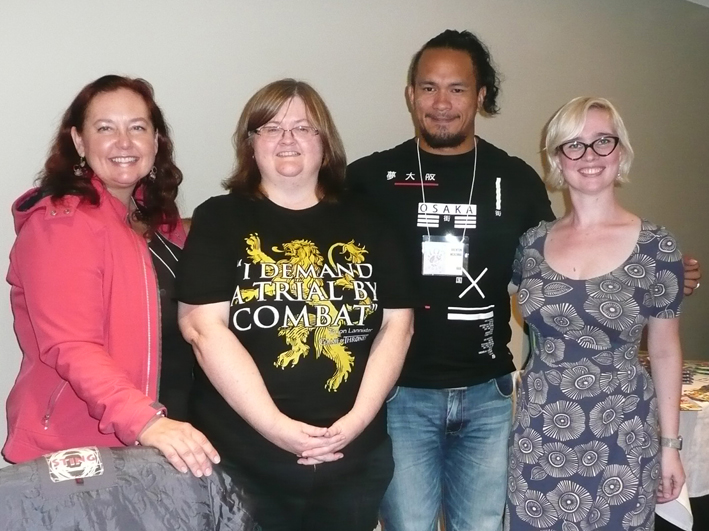 We also ran into some familiar names from our own collection, Karen Beilharz and Richard Smith. Karen Beilharz gave us some new comics under Legal deposit right there on the spot! She's sent in her publications before, and it was nice to see her in person. 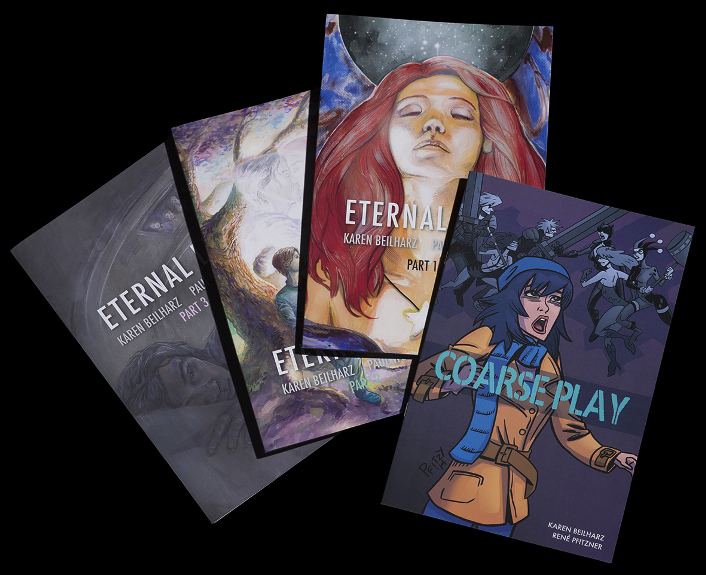 We also enjoyed catching up with Richard Smith, who sent his comic Mask in to us last year. We put on our own 'masks' and struck a pose. 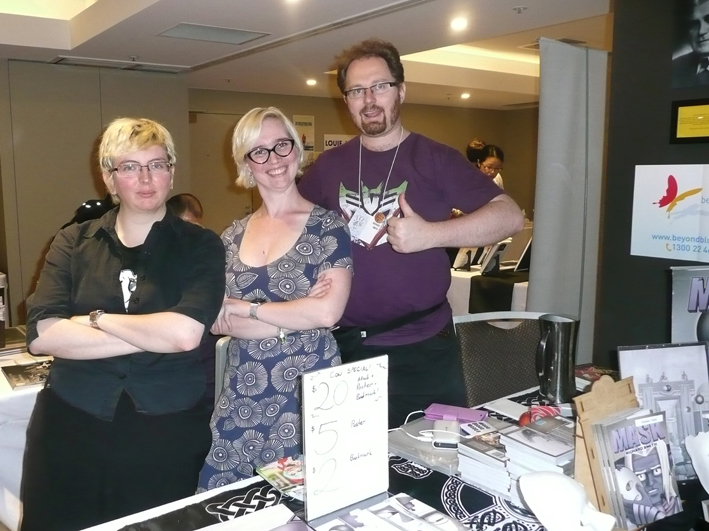 Ros, Nicolette, and Richard with copies of Mask.

Jamie Clennett had lugged in a pile of his beautiful 1.2kg graphic novel, Diemenois. He told us all about his experiences with Trove, and showed us some of the pages where he'd been able to use snippets of newspapers from Trove in his art. There are a lot of hidden treasures in Trove, and it was wonderful to see Trove's potential for reference pictures and newspaper clippings. 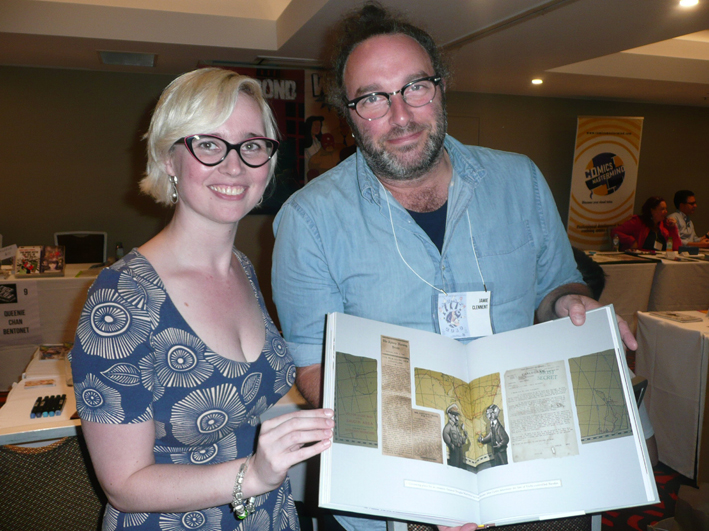 Nicolette was delighted to see how useful our collections can be to creators.

We made sure to visit every table, and we tried to get a little bit of everything, especially things that might be harder to get in the future. Christian Roux, Paul Mason, Eleri Harris and Nic Lawson all had things that won't ever be reprinted, and it was great to be able to acquire them before they disappeared. 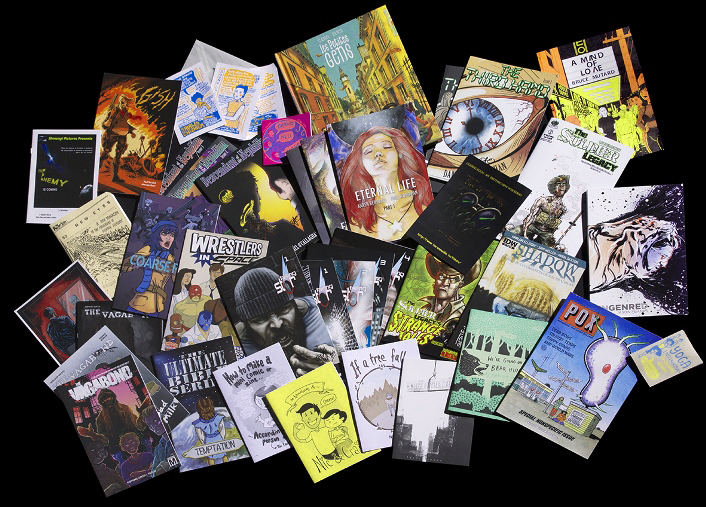 New comics in the Library! In the next few weeks these titles will be given to cataloguers, have quality catalogue records made for them, and the records will enter the national database so that everyone can see them.

In the days following ACAF, we were delighted to have Bruce Mutard, Paul Mason and Amanda Bacchi visit. We brought some classics from our collection out, and talked about Australia’s unique history of isolation, syndication and comic culture. Hearing Bruce and Paul talk about the influences of early Australian creators on modern Australian comics was humbling. Our resolve was strengthened to reach out and improve our collections of contemporary Australian comics, and to carry these stories forward to the creators of Australia’s future comics, zines and graphic novels.

ACAF 2017 is nearly a year away, but we’re already looking forward to it.

Comment:
Glad you liked it team! Can't wait to do it all again!
Comment:
We can't wait either, looking forward to ACAF 2017!
Comment:
Wow, thanks for this article, and for mentioning 'The BentoNet!' It launches in June 2016. Great way to get access to the work of local authors, and not just comics too! :D
Comment:
We look forward to checking out BentoNet in June! We hope it increases connections between libraries and local authors and artists!
Comment:
Lovely article and what a great story of creating mutually beneficial relationships with a creator community.
Comment:
Thank you! We are keen to meet with as many Australian creators as we can. ACAF was a great way to do this.
Comment:
Fantastic article. Thank you to the NLA librarians for their exuberance and interest in the comics medium, as well as their support for Aussie comics creators. Hope to see you again next year.
Comment:
Thank you, Julie! Nicolette, Debbie and I all appreciated your talks, and we’re looking forward to seeing you next year.