Restricted!
My journey into the dark archive 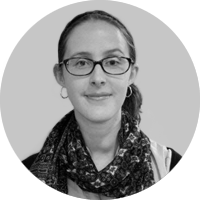 There are different names for it—restricted section, giftschrank (which translates to ‘poison cabinet’), and my personal favourite, dark archive. The official name for our restricted section is ‘Secure Room - Restricted’, or SRR. Somewhere within the vast maze of our stacks, there is a locked room which requires special clearance to enter. Within that room are several locked steel cabinets, which still fewer Library staff can access. Within these steel cabinets is a treasure trove of banned books, which are unavailable to Library readers.

Our restricted section is almost as hard to access as this bank vault would be—if the door were shut. 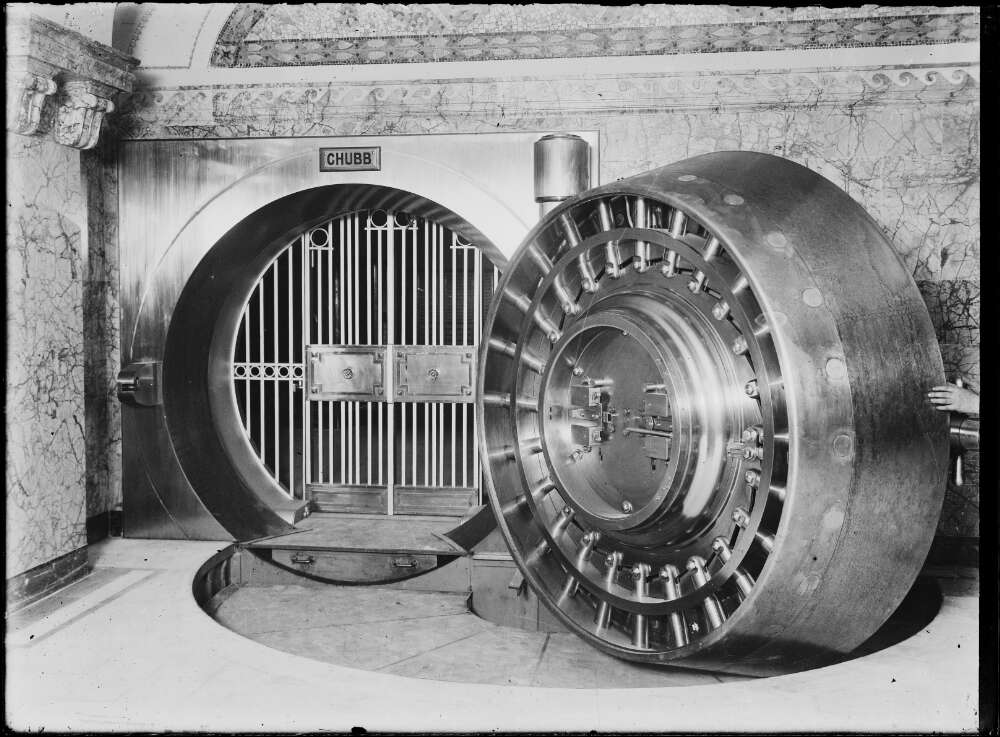 I have been delving into our SRR, trying to figure out exactly why each item was restricted, and whether or not that restriction should still be enforced.

As I’m a massive fan of Harry Potter, whenever someone says ‘restricted section’ this is what immediately springs to mind:

I’m slightly disappointed to report that all the publications that I’ve investigated so far have been Muggle publications.

The 153 publications I found in the SRR were put there for a variety of reasons including:

So what kind of publications do you think make up most of our SRR?

I bet you will be surprised to discover that, no, the SRR is not bursting with banned erotica. The correct answer is: it’s a tie between litigation and commercial in confidence! 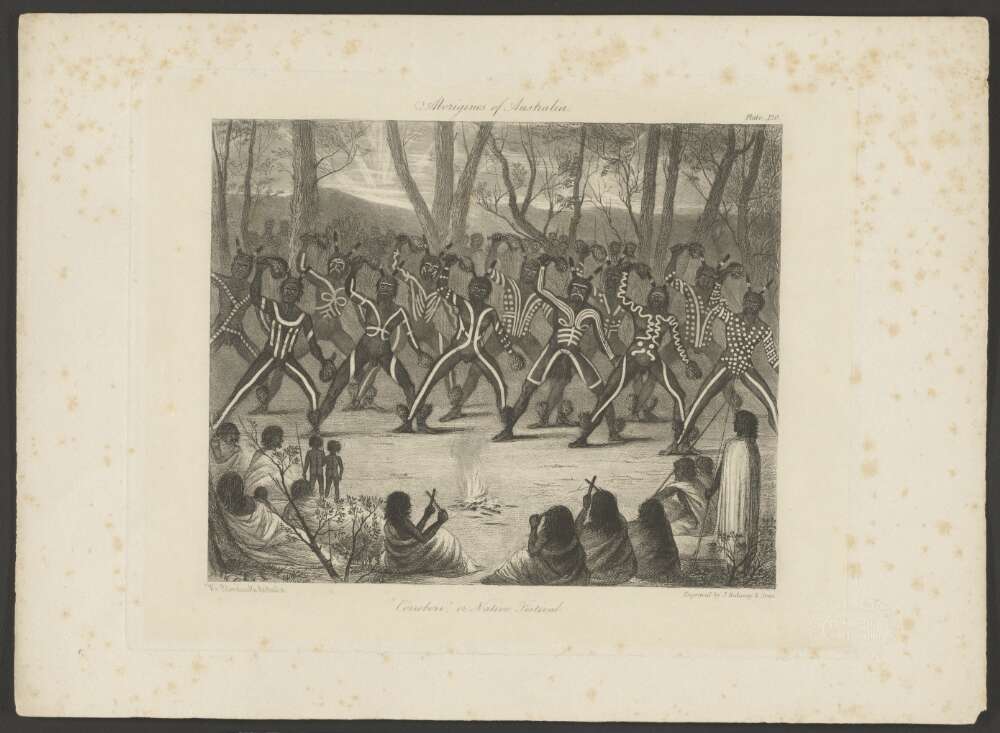 Out of respect for Indigenous protocols and sensitivities, we keep some Aboriginal and Torres Strait Islander material in the SRR. Some of it can only be accessed with special permission from the publisher. Some of it is restricted as it is secret men’s business, or women’s business.

I had to confirm the ISBN on one item in this category, which was tricky, as the catalogue record contained the following note:

To get around this restriction, I enlisted the help of one of our male Indigenous staff members, who inspected the material and passed the relevant information on to me.

A large number of the books in the SRR are there because they were recalled by the publisher due to ongoing court cases, or upheld claims for defamation. 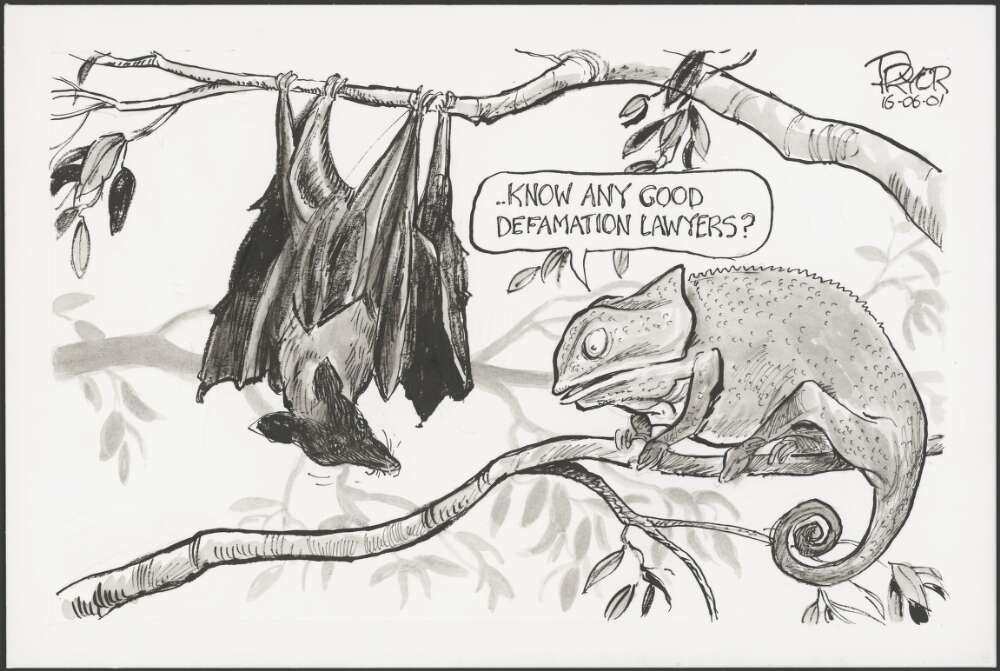 Back in 1997, Goodbye Jerusalem by Bob Ellis made the rather sensational claim that two prominent politicians were lured to join a particular political party through the seductive wiles of a woman who is now the wife of one of those politicians. Hundreds of thousands of dollars in damages later, the book was reissued with the offending sentence omitted. We have the original edition in the SRR, and the updated edition in the general collection.

In 2014, He Who Must be Obeid by Kate McClymont and Linton Besser was recalled and pulped by the publisher, when it became apparent that the authors made the unfortunate mistake of accusing the wrong Chris Brown of being ‘in business’ with the Obeid family. Again, we have a copy of the original edition in the SRR, and the corrected version in the general collection.

A classification that identifies information that, if disclosed, may result in damage to a party’s commercial interests, intellectual property or trade secrets. You must not disclose any information marked ‘Commercial in Confidence’ without permission from the party who supplied it.

At the request of the publisher, we place commercial in confidence publications in the SRR for an agreed-upon period of time, after which it becomes available to the general public.

Publications like these are important for the Library to collect for future use, as they often provide detailed data about various aspects of Australian life, for example Residex predictions. Best rent report NSW/VIC/QLD/ACT/NT/WA. 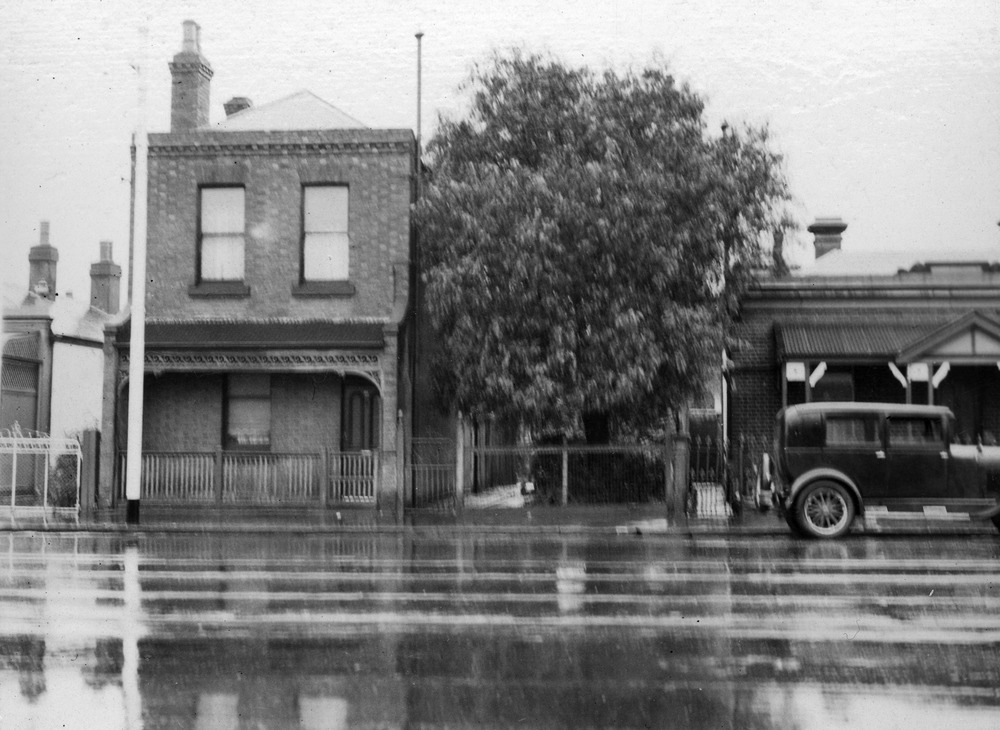 The Bubble Boy trading cards were published by the Queensland AIDS Council back in the mid 1990s. The cards feature an image of safe sex advice on one side, and an image of men engaged in various sex acts on the other side. I found the cards in the SRR, sealed in a stapled envelope. There was no catalogue record. 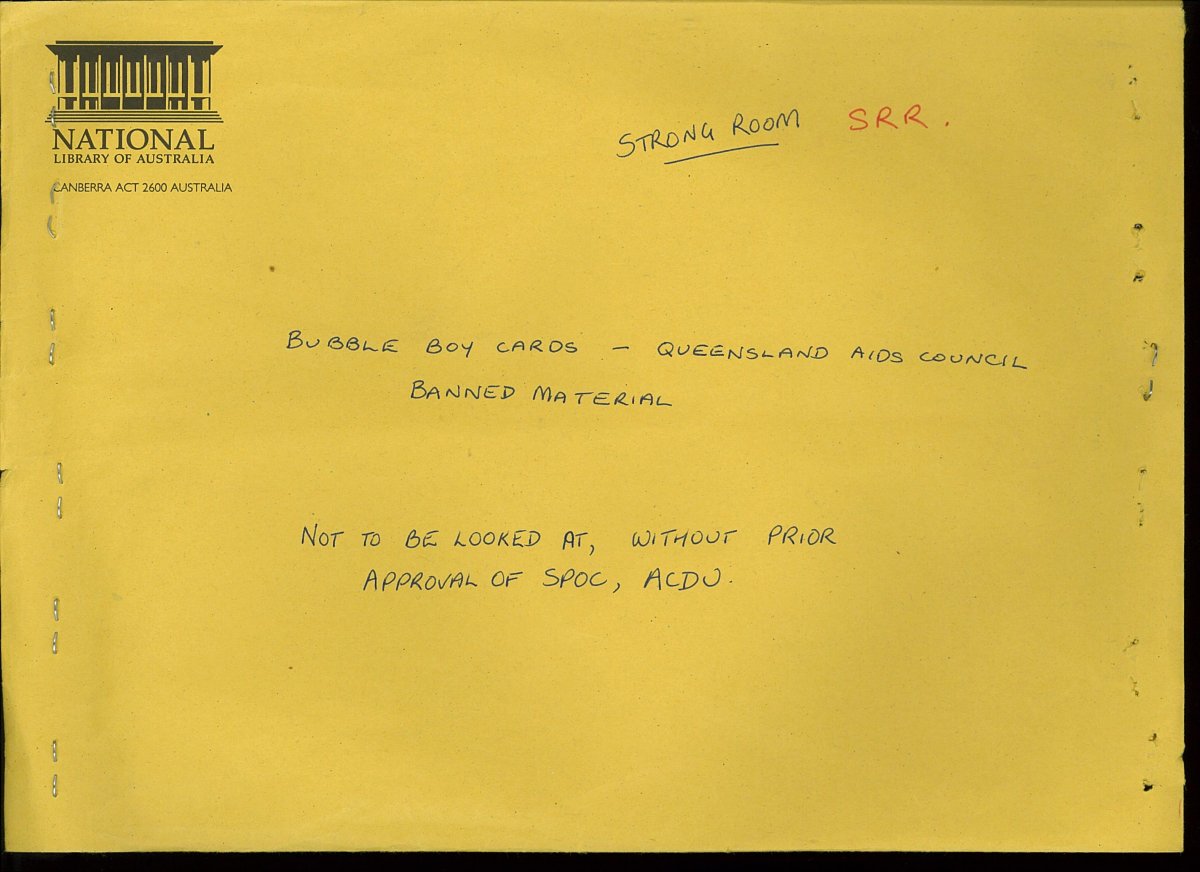 With the exception of Queensland, pornographic publications are only banned in Australia if they are given an RC classification by the Australian Classification Board. In this case, as the Bubble Boy trading cards were not given an RC classification, I relocated them to another collection with a similar name called the Secure Room (SR) collection, which is where the rest of the pornographic material lives. The cards can now be requested and viewed under supervised secure conditions by the (18+) public in our Special Collections Reading Room.

These are the books that raise the problematic issue of censorship for libraries.

If librarianship is the connecting of people to ideas—and I believe that is the truest definition of what we do—it is crucial to remember that we must keep and make available, not just good ideas and noble ideas, but bad ideas, silly ideas, and yes, even dangerous and wicked ideas. 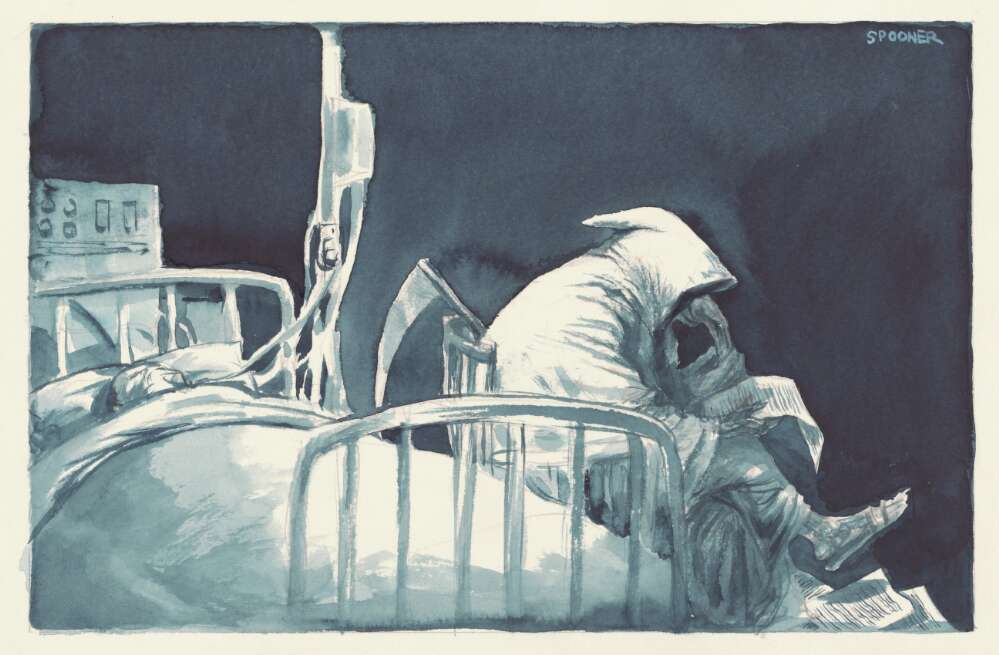 The Peaceful Pill handbook by Philip Nitschke sets out information on assisted suicide and voluntary euthanasia. When it was first published in 2006, it received a Category 1 classification—restricted to adults. In 2007, the Category 1 rating was appealed by the Attorney-General, backed by the Right to Life Association (NSW). The appeal was upheld, and the book’s classification was changed to RC (refused classification). I discovered that in the ACT, Library staff who knowingly deliver RC books to members of the public face a hefty fine and up to one year in prison, and so The Peaceful Pill handbook sits in the SRR collection.

Australian publishing history is full of controversy and embarrassment, and many of the resulting books still sit in our general collection, able to be accessed by anyone.

For example, we have a copy of The whole pantry, which was withdrawn from sale by the red-faced publisher after the author admitted that she’d never actually had cancer, let alone beat it through clean living. But whilst misleading, healthy living (probably) never actually hurt anyone.

There is a line that sits between what is an embarrassing publication, and what is a dangerous publication. That line can be somewhat subjective, and tends to shift over time.

Sometimes the line is clear—in our restricted section there is a certain agricultural booklet published decades ago by a government body that recommends the use of a substance that has since been banned. The substance was at the heart of a class action which claimed compensation from the chemical’s manufacturer for damaged crops, fish abnormalities, as well as birth defects and cancer in humans. So why do we keep publications which cannot be accessed? As Alison Dellit, our Director of Australian Collections Management says in her interview with ABC program Story Hunters:

part of the role of the Library is to keep the history of Australian publishing, and part of this history of publishing is that sometimes people publish things that shouldn't have been published.

We are not in the business of destroying books, so if a title is banned or recalled, we move it to our restricted section. Thereby we retain a piece of Australian publishing, whilst still respecting the law. These items may become a valuable resource for future researchers, so it is important that a copy is retained in a safe and secure environment.

Laws change, as do moral values, so a book that is restricted today may be unrestricted tomorrow. Many books that were prohibited 50 plus years ago are now considered to be classics—Brave New World, Lolita, and The Catcher in the Rye to name but a few.

A truly great library contains something in it to offend everyone. 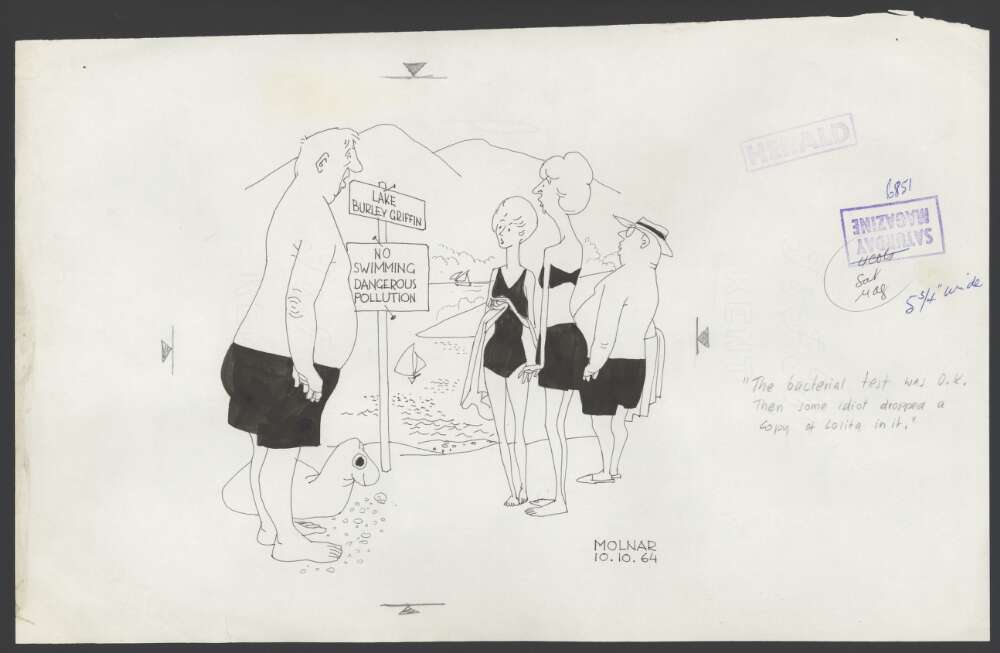