Q & A with Garth Nix

Garth Nix was born in Melbourne, but raised in Canberra. A full-time writer since 2001, he has previously worked as a literary agent, marketing consultant, book editor, book publicist, book sales representative, bookseller, and as a part-time soldier in the Australian Army Reserve.

More than 5 million copies of his books have been sold around the world, appearing on the bestseller lists of The New York Times, Publishers Weekly, The Guardian and The Australian, and his work has been translated into 40 languages.

On 29 September Garth Nix will be at the Library to deliver his long-awaited fifth instalment to the Old Kingdom series, Goldenhand. We were lucky enough to sneak in a chat with Garth before his visit to ask about his recent projects, his writing, and his reading.

I think it’s because I like to tell stories, to try to make them become real. They start from just a few ideas in my head, and slowly more ideas come along and get expanded and eventually a story begins to form and I really want to tell it.

What 3 titles should always be on the shelves of any self-respecting book shop?

I’m not a great believer in any particular set of books. I would say that a bookshop should always have books the staff love and believe in, and want to sell over and over again. If it was my bookshop, this would include a great many more than 3 books, but some contenders would be A Wizard of Earthsea by Ursula Le Guin, The Weirdstone of Brisingamen by Alan Garner, C.E.W Bean’s Official History of Australia in World War One, Our Mutual Friend by Charles Dickens, Power of Three by Diana Wynne Jones, Catseye by Andre Norton, the entire Aubrey and Maturin series by Patrick O’Brian, My Brother Jack by George Johnston, The Magic Pudding by Norman Lindsay . . . and many, many others!

Goldenhand is a fantasy adventure set in the same Old Kingdom world as my books Sabriel, Lirael, Abhorsen and the prequel Clariel. It basically picks up straight after Abhorsen and concerns life and death and love and hate; several kinds of magic; bells and swords and creatures both terrible and benign... 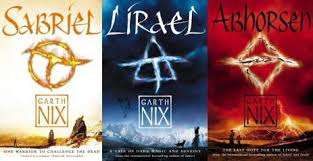 Book covers of Sabriel, Lirael and Abhorsen by Garth Nix

What was the hardest part of writing your latest book?

I usually have trouble around the middle of a book, when I doubt what I’ve already written and I also doubt my ability to go on. However, as this happens with every book I’ve written, I’m well used to making myself press on and somehow by the end I’ve normally come around and don’t think it is the worst thing ever.

What was the best part of writing your latest book?

What’s the strangest piece of advice you’ve ever been given as a writer?

I don’t think I’ve ever been given any particularly strange advice, possibly because for many years I also worked in publishing (as an editor and the agent) so people were often asking me for advice. Some of the advice I’ve given might be considered strange, I suppose. My favourite piece of advice (one gleaned from many authors) is to always be writing something. Don’t wait to see what’s going to happen with a work you have out on submission, or in the process of being published, always move on and be working on new things as well.

What’s the strangest question you’ve been asked about your writing?

I was once asked ‘Why the number 996?’ at a book event, with no context whatsoever. It took a while and several repetitions of this exact question and then some supplementary questions back from me to discover that the question was in reference to a small detail in my book Abhorsen, the number of rungs in a very long ladder entered from a well. The answer was ‘No particular reason.’ Which I suspect was very disappointing.

I’m in the early stages of a new fantasy novel, in a completely new setting unrelated to any of my previous books. It’s set in a kind of alternative 17th century Europe, with angelic magic. The title is secret for now. But I already have another book done, which will be out in February 2017. This is Frogkisser! the story of Princess Anya and her dog Ardent who go on a quest to find the ingredients of a magical transmogrification reversal lip balm she needs to turn her older sister’s prince back from being a frog into a person, a newt back into a boy, a half-human otter back into an otter and more...

I love the accidental discovery of books that I didn’t even know about, and wasn’t looking for; and the trail of research that begins with a small clue and leads onward to all kinds of fascinating knowledge.

Book your tickets to the author talk with Garth Nix on 29 September.