The story behind Goody Two Shoes

The term “goody two shoes” is today used in a pejorative sense for someone who is self righteous and ostentatiously virtuous. This usage began around the late 19th or early 20th century. However goody two shoes once had a far more praiseworthy meaning. In the 18th century it was something that children could happily aspire to, thanks to a popular book published by John Newbery.

Before the 1700s, only a few books were specifically published for children and these had an educational or religious theme. Of course for centuries there had been both oral and written traditions of fables and tales that children would have heard from their parents, but they were meant for an adult audience. The real turning point came in the 1740s, when a cluster of London publishers began to produce new books designed to delight young readers, both in content and presentation.

The most famous of these was John Newbery. He moved from Reading to London in 1743 and by 1745 had established himself as one of the many booksellers and printers that sold their wares from St Paul’s Churchyard. Most had distinctive signs identifying their premises, and Newbery traded from the Bible and Sun at No. 65. It may seem odd for a churchyard to be occupied by the publishing trade, but when Henry VIII dissolved the monasteries, the buildings on the Cathedral site were seized and sold off mainly to printers and booksellers.

Newbery’s first book for the entertainment of children was A Little Pretty Pocket-Book Intended for the Instruction and Amusement of Little Master Tommy and Pretty Miss Polly. It was small, neat and bound in brightly coloured paper – ideal for a child to hold in their hands. Newbery advertised it as being sold for six pence, but for an extra two pence you also received a ball (for a boy) or a pincushion (for a girl), intended to be used to record the owner’s good and bad deeds by means of pins stuck either to the black side of the ball or pincushion (bad) or the red side (good). Presumably it was the parents who would do the “pin sticking” rather than self-assessment by the children! The book consisted of poems, proverbs and an alphabet song. The Library holds a lovely facsimile edition of this little work, which interestingly is said to include the first mention of the sport baseball. 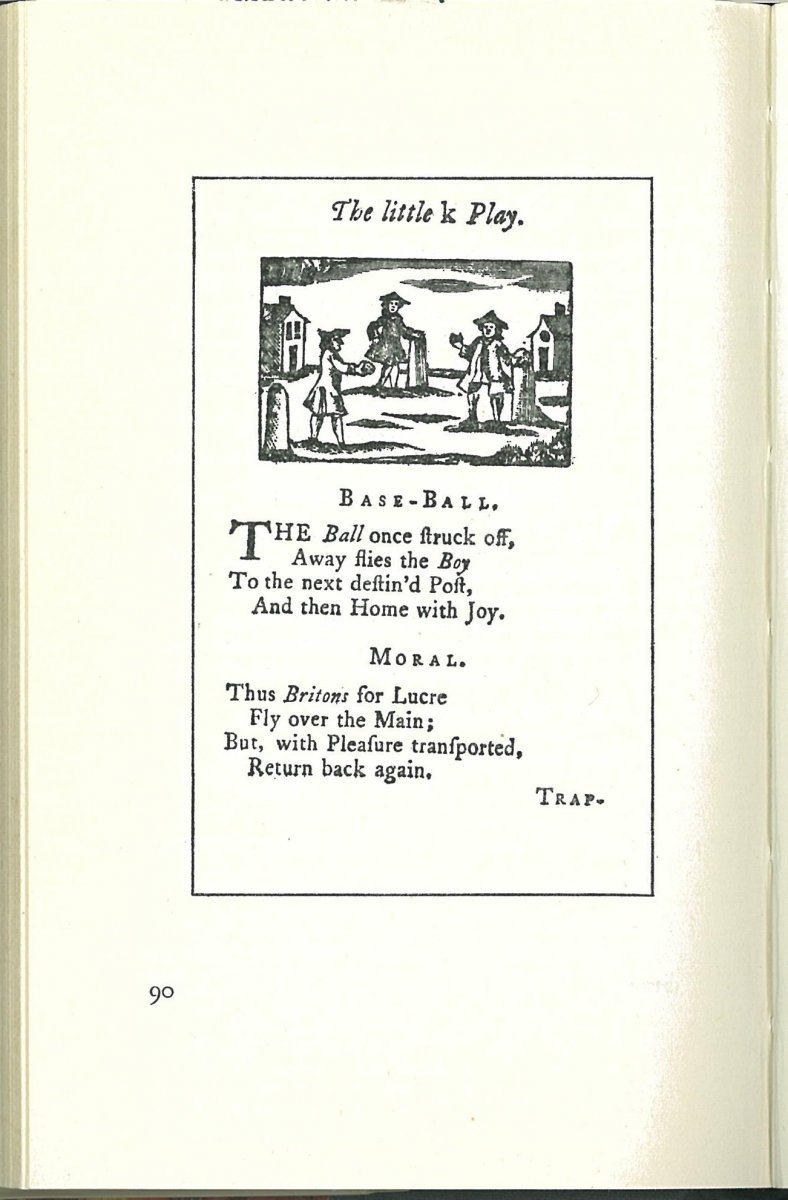 However, my favourite is the game hop-hat. Each of the games depicted also has a little moral at the end. 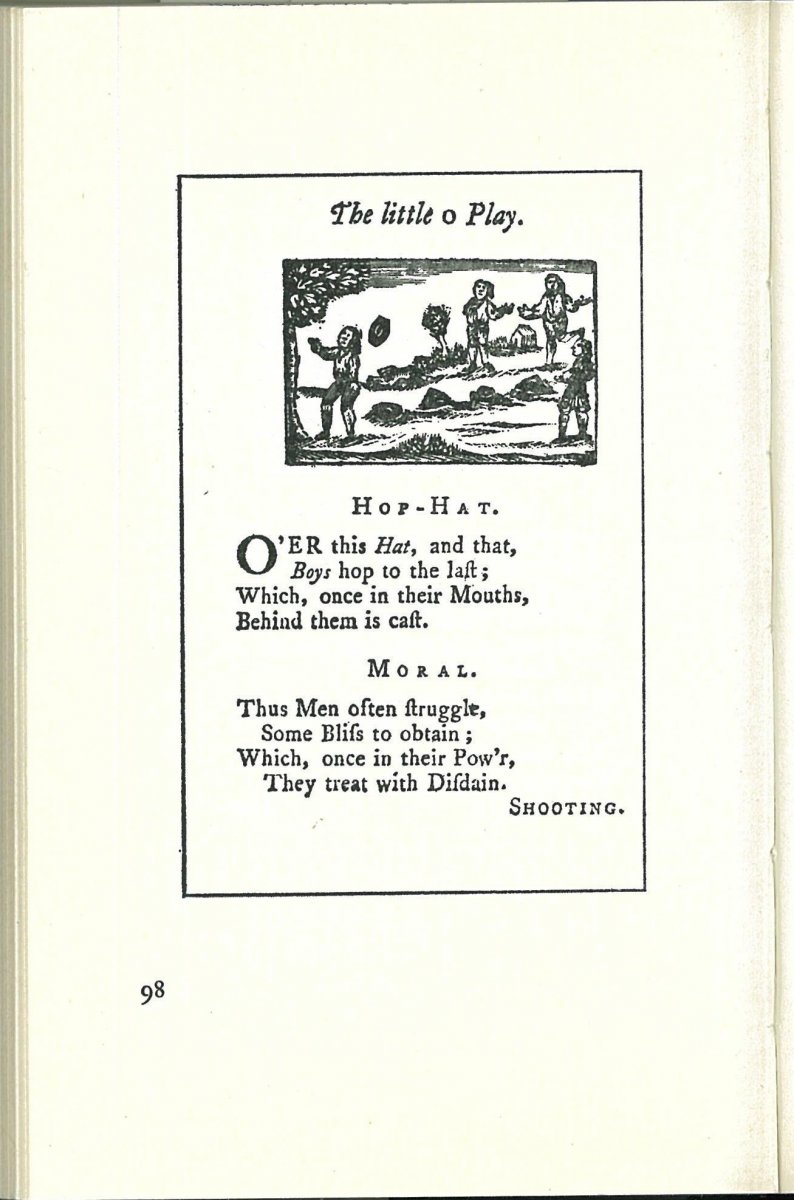 Newbery was a great innovator too. For example, he produced the first children’s periodical called The Lilliputian Magazine (1751-52), which had the rousing subtitle “the young gentleman & lady's golden library. Being an attempt to mend the world, to render the society of man more amiable, and to establish the plainness, simplicity, virtue, and wisdom of the golden age, so much celebrated by the poets and historians.” A worthy if somewhat ambitious aim! The magazine contained a mix of stories, verse, riddles, dances, songs and chatty editorials. I love some of the character names used in the stories – who could resist “The history of Miss Sally Silence : Communicated by Lady Betty Lively.” Sounds like a fun read.

In 1765, Newbery published his most popular book, The History of Little Goody Two-Shoes. It has a good claim to be called the first children’s novel. There is some doubt about the author, but the consensus is that it was probably Oliver Goldsmith. He is known to have previously ghost written similar stories for cash, not wishing his name to be credited. He became associated with Newbery in 1759, with Newbery employing Goldsmith to write or revise several books and pamphlets and contribute articles to his new periodical the Public Ledger. This helped to promote Goldsmith’s reputation as a writer and is an example of Newbery’s use of his money to help writers through financial hardship.

The History of Little Goody Two-Shoes tells the story of two poor orphans, Margery Meanwell and her brother Tommy. Margery has only one shoe. When a kind gentleman gives her a pair she tells everyone she is so happy she now has “two shoes” (hence her nick name). Margery goes on to make a career for herself as a teacher before she marries the local landowner who has been impressed by her honesty, hard work and good sense. She inherits his fortune and uses it to help the poor. Despite the emphasis on honesty and virtue, the book was written to entertain. It even includes a tongue-in-cheek reference on the title page “See the Original Manuscript in the Vatican at Rome, and the Cuts by Michael Angelo. Illustrated with the Comments of our great modern Critics”. 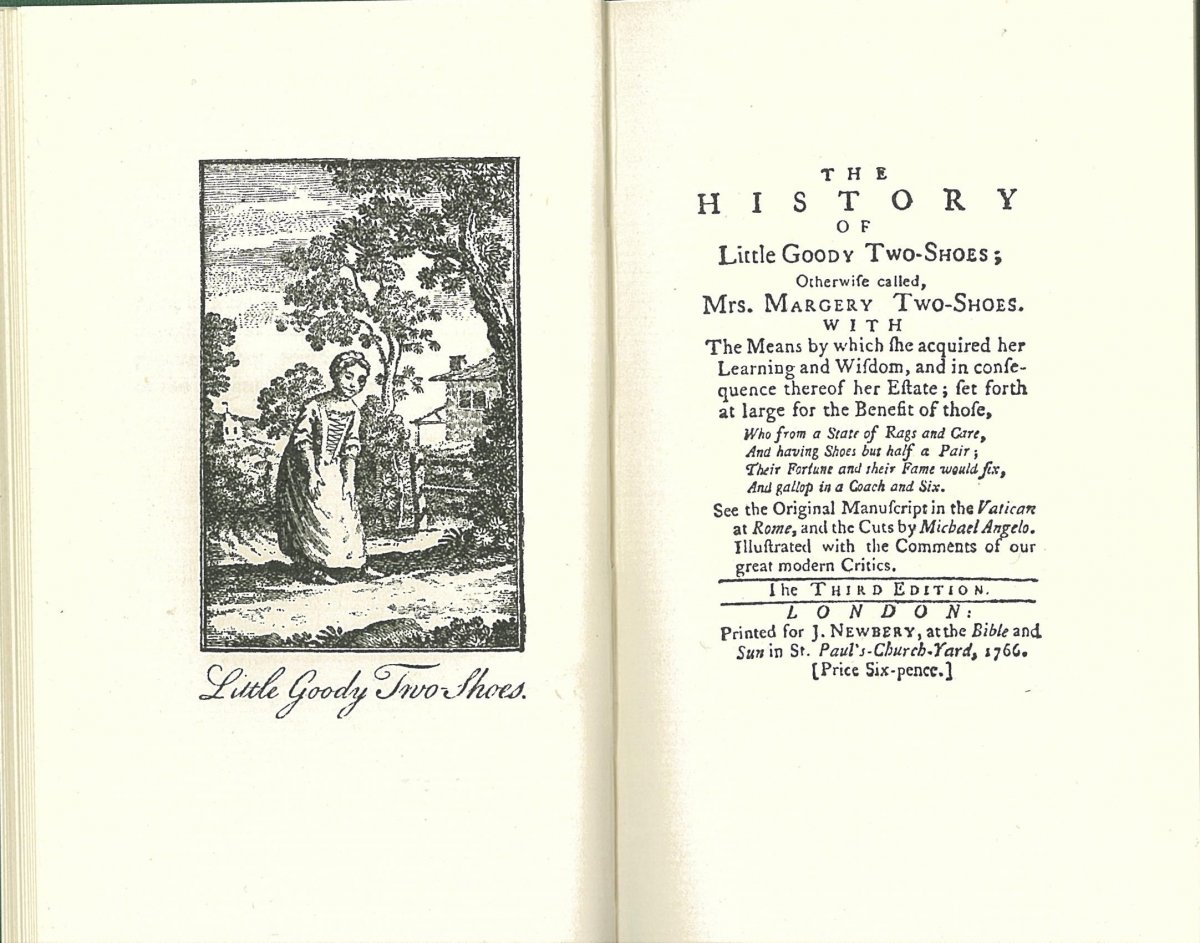 In recognition of Newbery’s contribution to the publishing of children’s literature, the American Association for Library Service to Children named their award to the author of the most distinguished contribution to American literature for children the Newbery Medal.

At the end of The History of Little Goody Two-Shoes there is an advertisement for some other books on sale from Newbery, and fascinatingly also a list of 10 patent medicines sold by Newbery “By the King’s Royal Patent”. This was another of Newbery’s business interests and quite a commercial success for him. One of his most popular medicines was Dr. Robert James's Fever Powder. It even makes its way into the story of Goody Two-Shoes with the heroine's father dying of a fever that it is said could have been prevented with the fever powder. 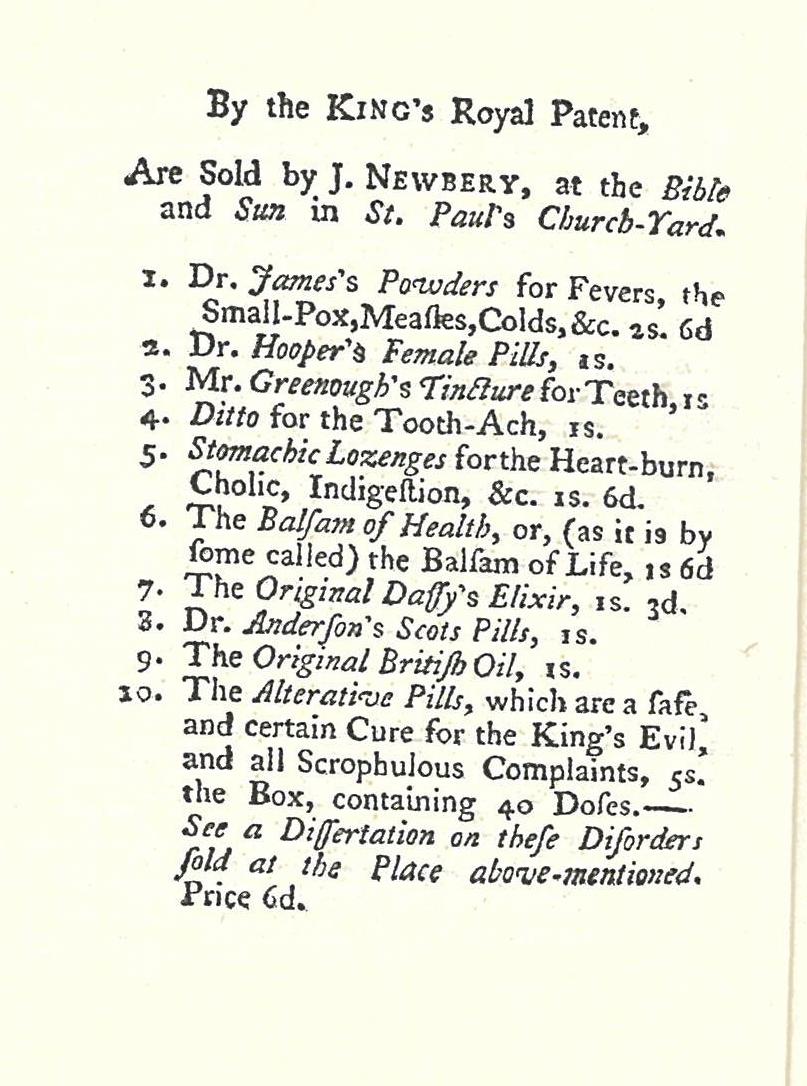 The ingredients of the powder were kept secret, with Dr James submitting a false patent application to ensure no one could copy it. An analysis of the powder in 1791 by the chemist George Pearson revealed that the main constituents were antimony and calcium phosphate, although it is said that the composition of the powder changed over time. Unfortunately the effect of the fever powder on the life of Newbery’s friend Oliver Goldsmith did not have a happy ending. Goldsmith appears to have been suffering from kidney disease in 1774 but against the advice of his doctors refused to be treated with anything other than Dr. Robert James's Fever Powder and died aged only 45.

Now, what connection could there possibly be between a children’s book published in 1765 and a flu epidemic in early 20th century Australia? It sounds unlikely, but there is a link! By January 1919 public health authorities in Sydney and Melbourne were becoming increasingly concerned by the spread of Spanish influenza. The number of diagnosed cases and the resulting deaths were causing alarm amongst the populace and the authorities looked for a means to break the cycle and stop further spread of the flu. In the last week of January a decision was made by the governments in both Sydney and Melbourne to close all places where people congregated, including schools, theatres and music halls. One of the shows thus affected was the J.C. Williamson production of Goody Two Shoes the pantomime, which was showing at Her Majesty’s in Melbourne.

A pantomime version of the story had become popular during the Victorian era, but it was rather different to the original children’s story, being given a fairy tale treatment and a cast of characters that were more familiar to a pantomime audience. Each producer adapted the story-line and added songs, dances, comedy acts, puppets, aerialists and sometimes even nursery rhyme characters such as Jack and Jill, Little Boy Blue and Mother Hubbard to enhance the show.

As you can see from this portion of the program for the J.C. Williamson performance in 1919, there is a scene set in the Astrologer’s Room at the Duke’s Palace and appearances by The Hobby Horses and a Children’s Flower Ballet in the village of Blossomville and lots of songs, including the well-known K-K-K-Katy. There was even an appearance by the Kenna Brothers in an aeroplane act that was reported to be very acrobatic! Certainly a somewhat loose rendering of the original Goody Two Shoes tale. More a case of throwing in everything you could think of to add colour, movement and spectacle. 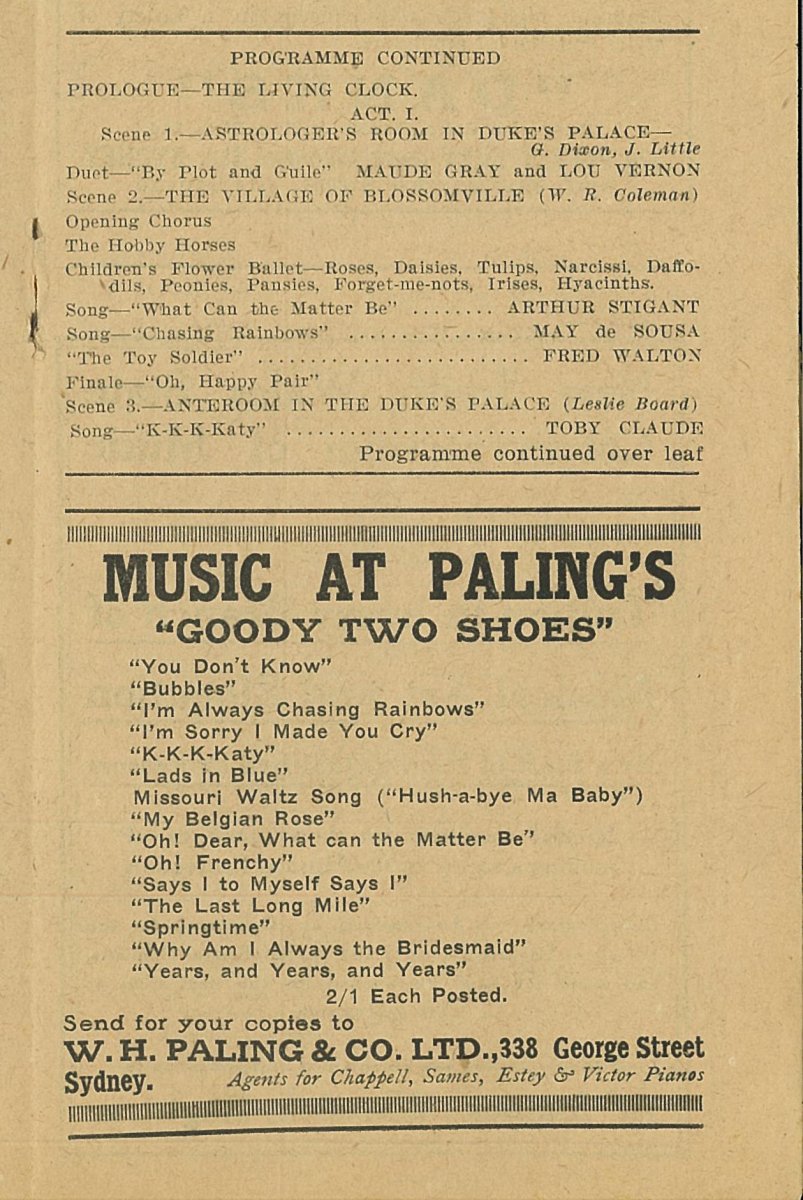 Excerpt from the program including an opportunistic advertisement by Palings for music from the show, from the J. C. Williamson programs ephemera collection, nla.cat-vn3532187

While performances of the pantomime were in hiatus, some of the cast were reported to be using their time productively. A newspaper article from February 1919 states that some members were training in nursing and VAD work so they could assist with treating those affected by the flu.

When the theatres reopened in Melbourne on Saturday March 8, the Governor-General and the Victorian Governor and their wives attended a special gala opening performance of Goody Two Shoes at Her Majesty’s Theatre. 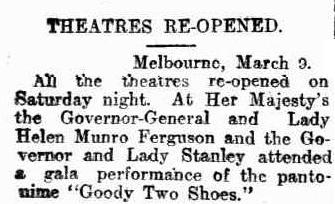 Facsimile editions of both A Little Pretty Pocket-Book and The History of Goody Two Shoes are on display during December 2016 in the Library’s Special Collections Reading Room.

Comment:
Thank you Julie your blogs are always fascinating!
Comment:
Fascinating, thank you. However there were bookshops and stationers at St Paul's long before the Reformation. cf Geoffrey Chaucer.