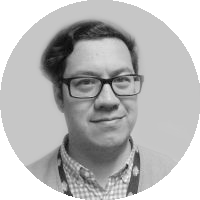 Being a time of the year for sharing spooky stories, I recently delved into the Library’s collections for some home-grown tales of mystery and imagination. Of all the stories I found, one kept recurring - the story of Frederick Fisher’s ghost. Now, this wasn’t a story that I was at all familiar with, and yet it was described in 1883 as "seriously considered in every household in the colony", and by 1903, "everybody has heard about Fisher's ghost". As recently as 1994, it was "perhaps Australia's best-known spectre" and in 2012, "Australia's most famous ghost story". Indeed, a search on Trove’s digitised newspapers for the term “Fisher’s ghost” brings a total of 1900+ results over a 160-year period, indicating that this has been an enduring tale across Australia.

Like many ghost stories, this was based on a true story and, at the centre of it, there was a murder. The earliest found reference was a Government Notice in the Sydney Gazette and NSW Advertiser on the 23 September 1826, seeking any information regarding Frederick Fisher, who had disappeared three months earlier, presumed murdered. 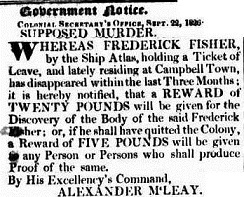 What happened next is outlined in reports following the trial of George Worrall in February of 1827. Fisher was a ticket-of-leave man, i.e. a convict who had been released and allowed to buy property, but not return to England. Soon after his disappearance in June 1726, Worrall, Fisher’s neighbour, was found to be selling Fisher’s horses and property, claiming that Fisher had returned to England, leaving him as power of attorney. Once a reward was offered for Fisher’s whereabouts, a search found blood on palings near Worrall’s property, where the body was eventually found in a shallow grave. Suspicions lay on Worrall, particularly when it was found that he’d forged receipts from Fisher, and he was eventually found guilty of murder and sentenced to death. 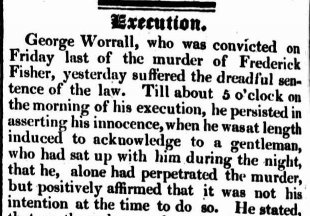 Within five years, the ghost story first appeared in a poem, "The Sprite of the Creek" published in September 1932 in Hill’s Life in New South Wales.

Prefaced with a quote from Shakespeare's Macbeth - referencing Banquo's vengeful ghost - this poem begins late at night, with the arrival of a terrified man who has just seen the macabre spirit of Fisher (here renamed as “Fredro”) sitting by the creek.

'Twas near the rude bridge that bestrides the dark creek
The horrible figure appeared;
On its pale ghastly visage was mark'd the red streak,
And sunken its eye-balls, and hollow its cheek,
And crimsoned with blood was its beard!

The authorities are brought to the place where the spirit appeared, finding blood, and… we know the story from there!

It wasn’t until 1853 that this popular ghost story reached an international audience in Household Words, a magazine edited by Charles Dickens, and distributed around the world, including a retelling in French Magazine L’ami de la Maison in 1856. 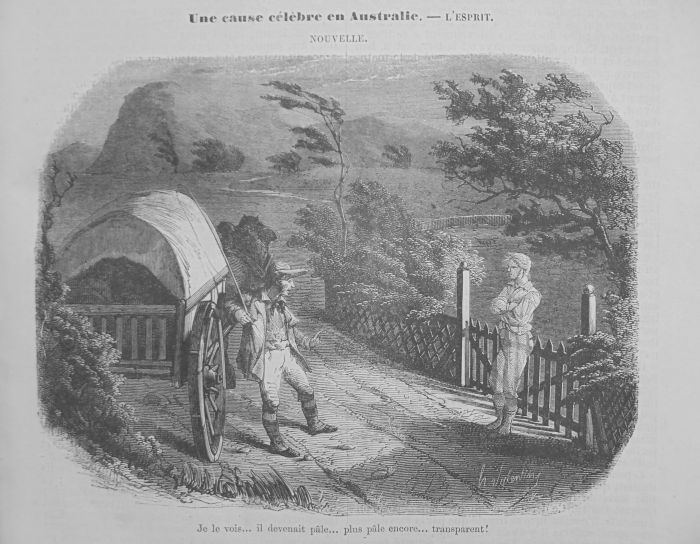 Its author, John Lang, eventually retold and published what would become the story “The Ghost on the Rail” in his 1859 collection of stories, Botany Bay. By now, it had grown to a 10-chapter short story, beginning with the portentous opening, “It was a winter’s night - an Australian winter’s night - in the middle of July..." This collection of stories was regularly republished, and eventually printed as Fisher's ghost and other stories of the early days of Australia.

By the late 19th century, the legend of Fisher’s Ghost had cemented itself as a well-known Australian story, and in 1879, there was a theatrical production of “Fisher’s Ghost” that toured around Australia, complete with special “ghost” effects on stage created by British scientist, John Henry "Professor" Pepper. 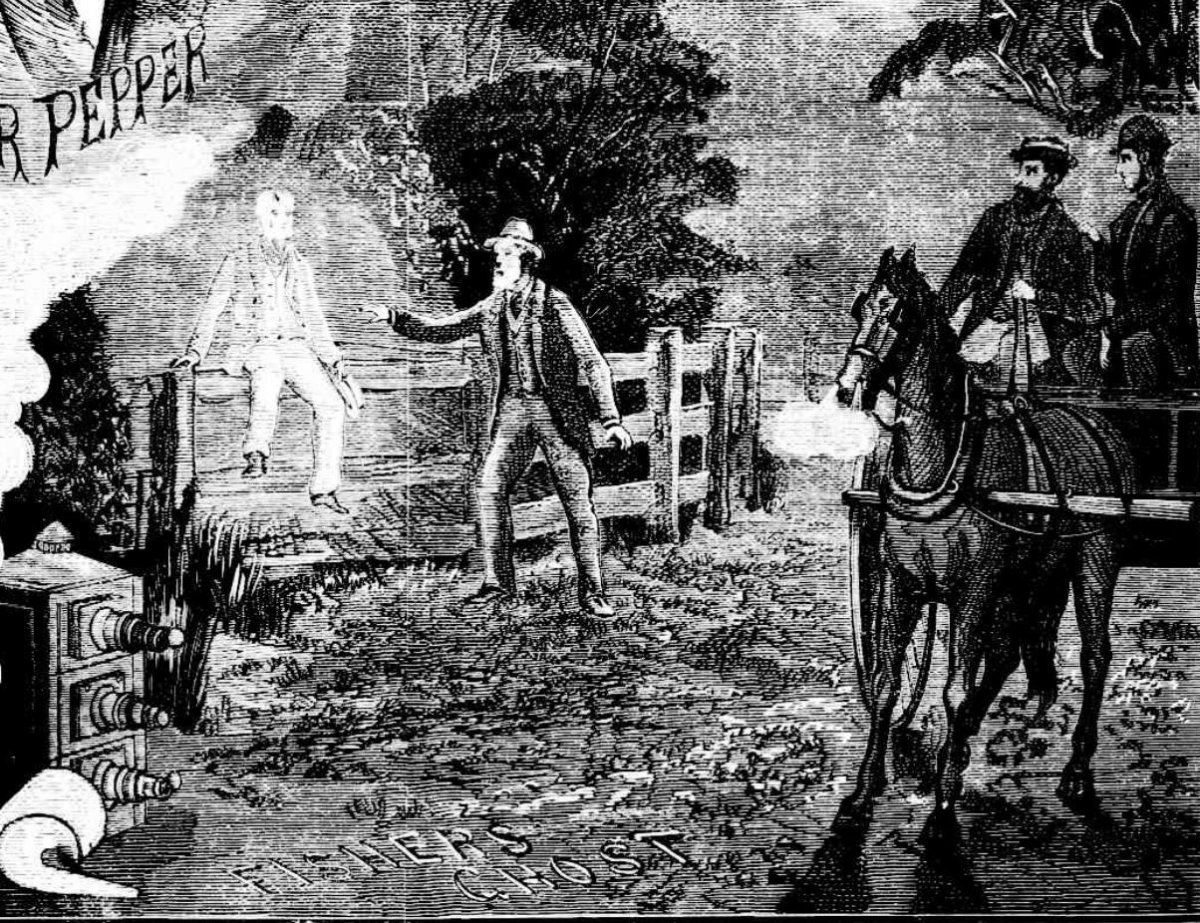 In 1924, a silent film of Fisher’s Ghost was written by Raymond Longford and Lottie Lyell, well-known for other celebrated films of this era including The Sentimental Bloke and The Bushwackers. Now a 55-minute film, this included elements of a love-story, with the opening scene on George Worrall’s wedding day, where he is apprehended and arrested. Unfortunately, like many of the films of this era, the footage has been lost. However, many advertisements and reviews of this movie can be found in digitised newspaper collections from the 1920s. 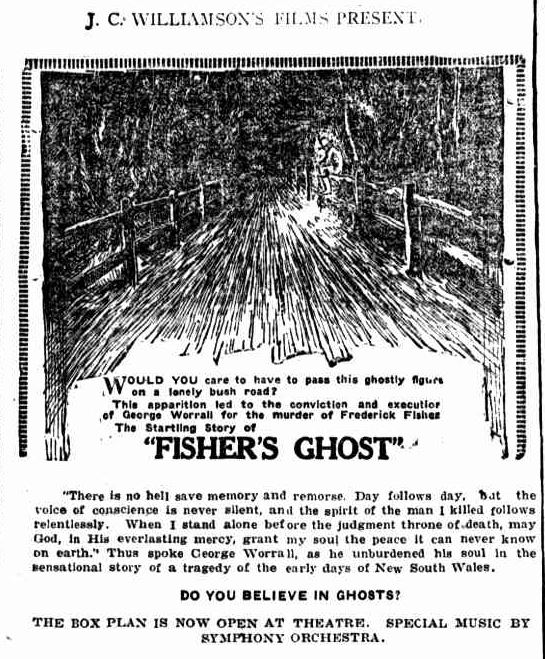 By the early 1940s, Fisher’s Ghost Creek had been named and signposted in Campbelltown, becoming a popular destination for enthusiasts of the paranormal and the otherwise curious. 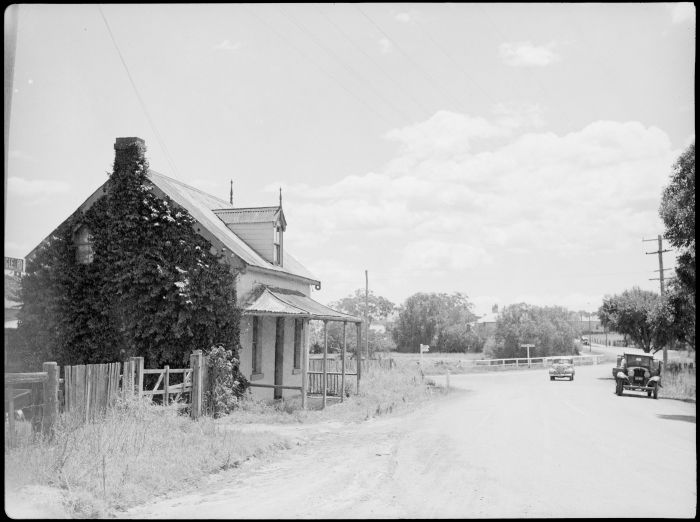 In 1959, a series of ballads were published in The Bulletin, written by Douglas Stewart, telling the story of Fisher’s Ghost - often from the point of view of the ghost. Complete with illustrations by Norman Lindsay, well-known for The Magic Pudding, these ballads featured in a play - Fisher's ghost : an historical comedy - which was published in 1960.

In that same year, an operetta was written by John Gordon - Fisher's ghost : a legend of Campbelltown, 1826 : an opera in three scenes, and in 1963 it was broadcast in ABC-TV’s first “television opera”, adapted specifically for television. 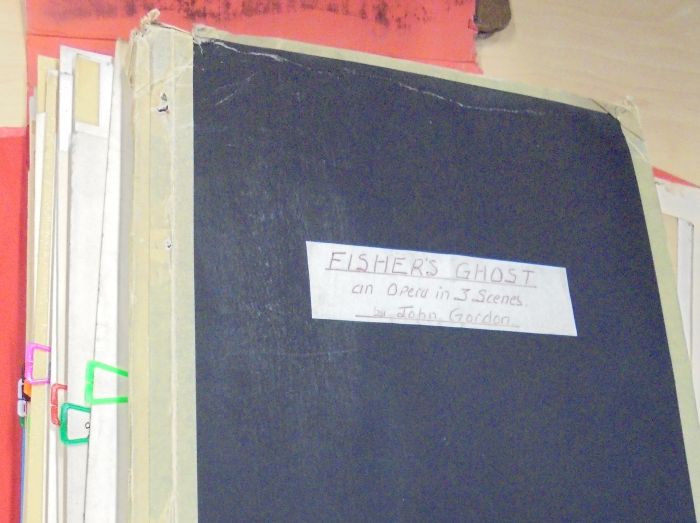 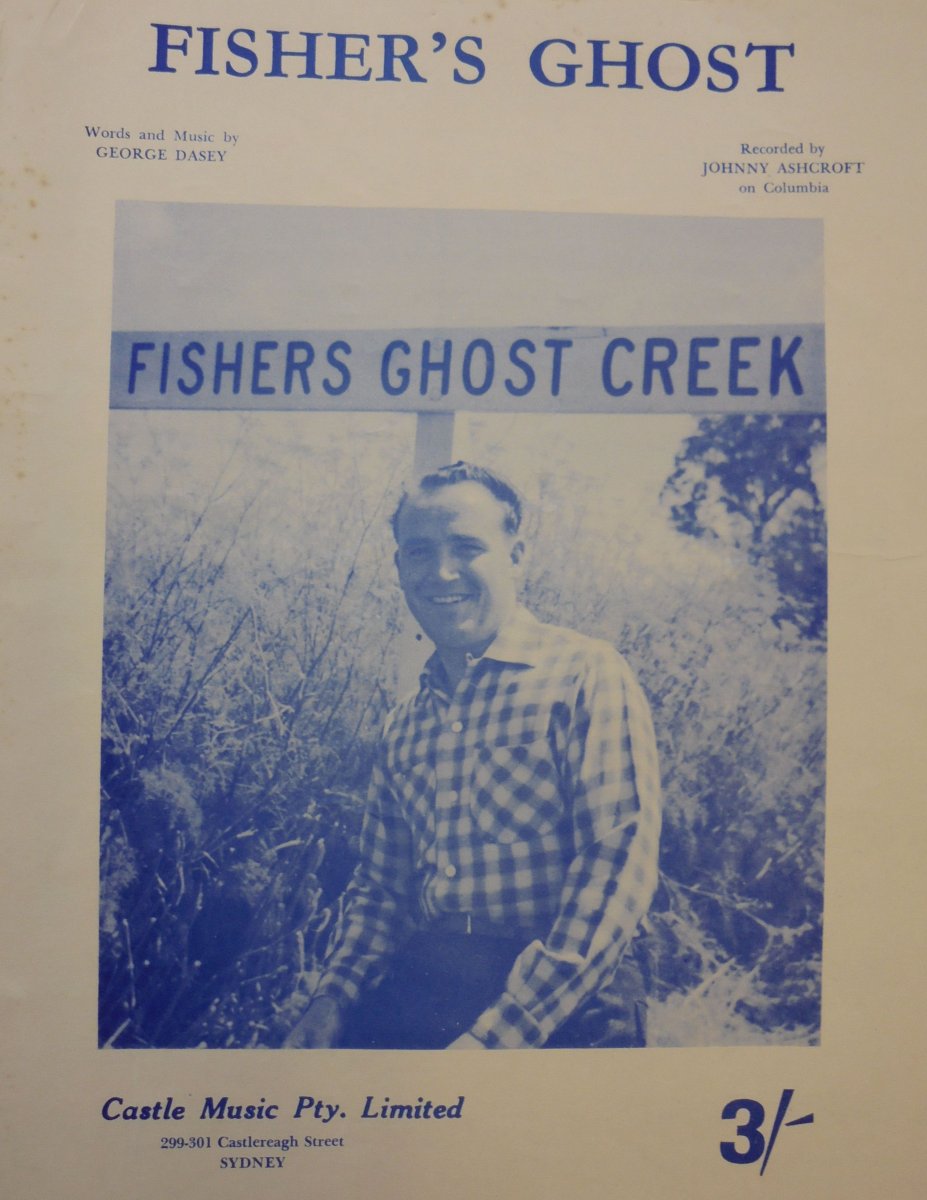 Written by George Dasey, this is a jaunty country ballad, perhaps a little reminiscent of Ghostriders in the Sky… which you can hear for yourself:

It’s perhaps no coincidence that these three performance works emerged around 1960, as only a number of years earlier the Festival of Fisher’s Ghost commenced in in Campbelltown in 1956. An annual event, inspired by this local legend, it has promoted art and creativity in the local community through the festival's 61-year history, and whilst the story may have been largely forgotten elsewhere, it is still well-known in this outer-Western suburb of Sydney.

These are but a few examples of how this story has evolved over the past 190 years - and there are numerous other retellings and commentaries of this story that can be found in the National Library’s print collection and digitised newspapers. Perhaps the time has now come for Fisher’s Ghost to be summoned once again, be it in new poetry, prose, film - or maybe a rock opera. I’m constantly inspired and fascinated by the ways that people rebuild and reinterpret stories, such as this one, and create new ways of telling them so that these legends can grow and live on...

Comment:
The book "Botany Bay" by John Lang, and originally published in 1859, and included the story "The Ghost upon the Rail" is available from Project Gutenberg Australia at http://gutenberg.net.au/ebooks06/0607441h.html
Comment:
Yes, Project Gutenberg is an excellent place to find full-text of out-of-copyright publications. Thanks for the link!
Comment:
What a interesting story there are many tales in Australian history and spin off that we as the public are unaware
Comment:
Indeed there are! And part of the fun is rediscovering them in the library... :)