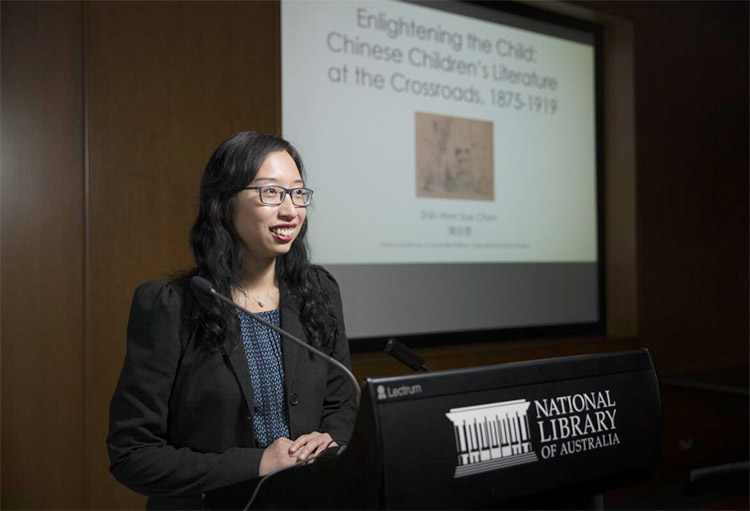 Dr Shih-Wen Chen is one of our 2017 National Library Fellows to recently take up residence in the Library, supported by Mr Ryan Stokes.

Dr Shih-Wen Chen (Sue) is a  Lecturer in Literary Studies at Deakin University. During her Fellowship, she researched Children’s Literature and Print Culture in Late Qing and Early Republican China, c.1875-1915.

In this blog, Sue explores: Where are the Koalas?: Australia in late-Qing Chinese children’s texts. She writes:

After China’s defeat in the two Opium Wars (1839–1842; 1856–1860), the number of travellers to the “Celestial Empire” increased dramatically, particularly after the 1860s. Protestant missionaries established mission presses in Shanghai and Peking (Beijing) to print Bibles, tracts and other Christian reading material. The Library’s London Missionary Society collection includes many of these early tracts and translated books of the Bible. The mission presses also produced children’s periodicals, including the Xiaohai yuebao (The Child’s Paper, 1875-1915), which was noted for its numerous illustrations and articles on natural history and geography. Chinese reformers and intellectuals soon established their own children’s magazines at the turn of the twentieth century, due to their concern about the China’s weakened state after losses in several conflicts with Japan, France, and Britain. They believed changing the education system was key to China’s survival. One critical aspect of their reforms was publishing new reading materials for young people that were easier to understand compared to the existing primers that were written in classical Chinese. Two of the most notable periodicals that emerged are the Mengxue bao (1897-190?), also known as The Children’s Educator, and the Qimeng huabao (or, Enlightenment Pictorial, 1902-1904). Their articles were mostly written in bai hua (vernacular or colloquial Chinese), which was easier for children to read and various illustrations accompanied the text.

The Children’s Educator was the first children’s magazine established by Chinese editors. Each issue is approximately 50 to 60 pages with many lithographed illustrations. Columns include language and literature, history and events, geography, natural science, mathematics, and ethics. The Enlightenment Pictorial, established by Peng Yizhong, an activist for vernacular literature, was a short-lived but important pictorial published in Peking. The length of each issue varied; some issues are more than one hundred pages long. Columns include ethics, physics, mathematics, geography, zoology, news from different countries, and translated novels, most notably, the best-selling novel of the 19th century, Harriet Beecher Stowe’s Uncle Tom’s Cabin. The Library has an original copy of No. 10 of the Qimeng huabao and a facsimile of the entire print run, as part of Minguo hua bao hui bian. Beijing juan [Comprehensive Pictorials in Republican China: Beijing Vols. 1-7]. Reproductions of the Xiaohai yuebao are found in the Shanghai section of Minguo hua bao hui bian (Vols. 77-78). The Library also has Mengxue bao on microfiche (1898 issues).

All three periodicals feature articles about different places around the world, including Australia. Australia is presented as an exotic place with odd animals, vast land, and great resources. In 1890, The Children’s Educator briefly mentioned Australia in relation to Australasia. The article lists the different islands that comprise Australia and also points out that the Bass Strait separates Tasmania from Australia. There are no maps however. In contrast, there are several maps of Australia in the Enlightenment Pictorial. Tasmania is specifically introduced as “the paradise of the Southern Hemisphere” because it has beautiful lakes and mountains and fertile land. 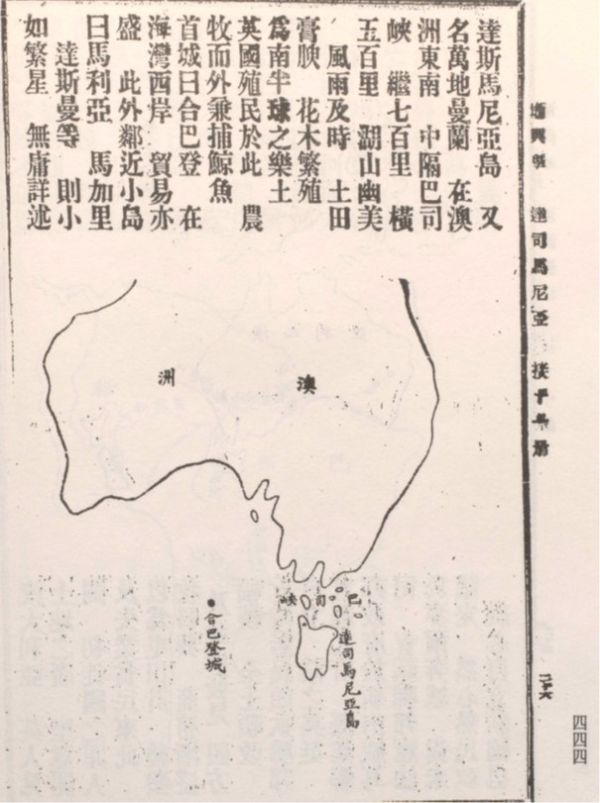 Animals feature most prominently in these texts. In 1902, the Enlightenment Pictorial published an article called “odd marsupials” which tells readers that kangaroos have short forelegs and long hind legs and that their tails, which assist them in their jumping, are very strong. Kangaroo fur is expensive and kangaroo meat is delicious. 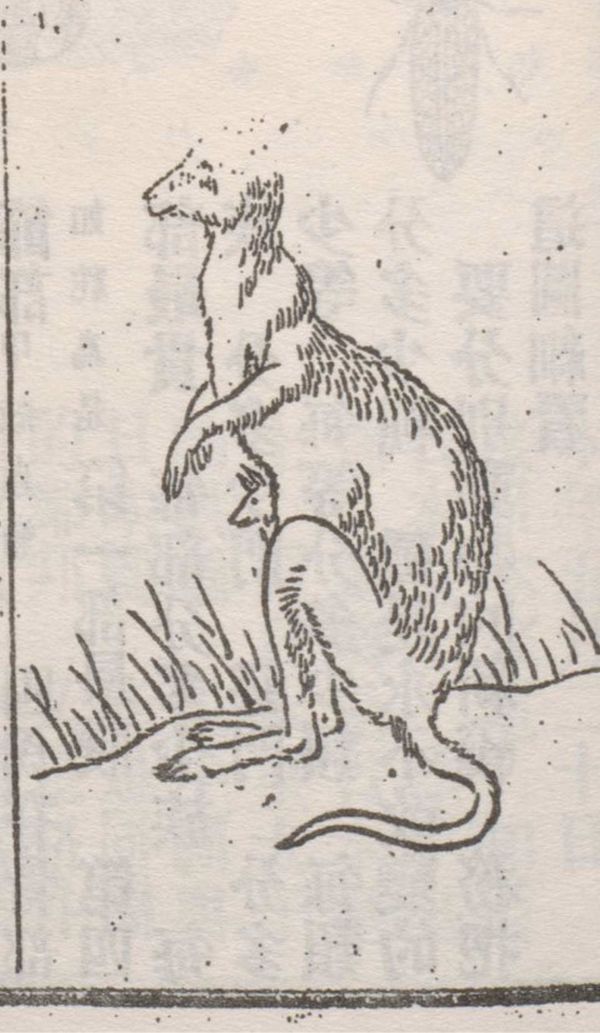 The following year, the periodical included an article on the duck-billed platypus, explaining that it is native to Australia and Tasmania and can grow to two chi in length [approx. 60 cm]. The fur on the tail is very thick, and the platypus looks like an otter. The narrator claims, “its mouth is like a duck’s, how strange!” Moreover, “It is not a bird, nor a beast. It is a bird and a beast.” 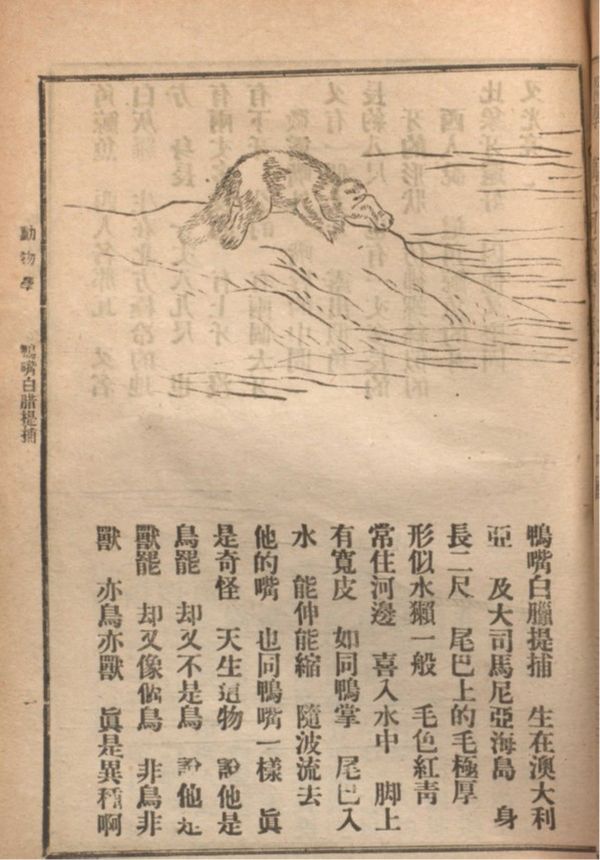 The Enlightenment Pictorial also taught readers about cockatoos and emus. Readers are informed that cockatoos are white with a yellow crest. They recognise people, so they are often kept as pets. 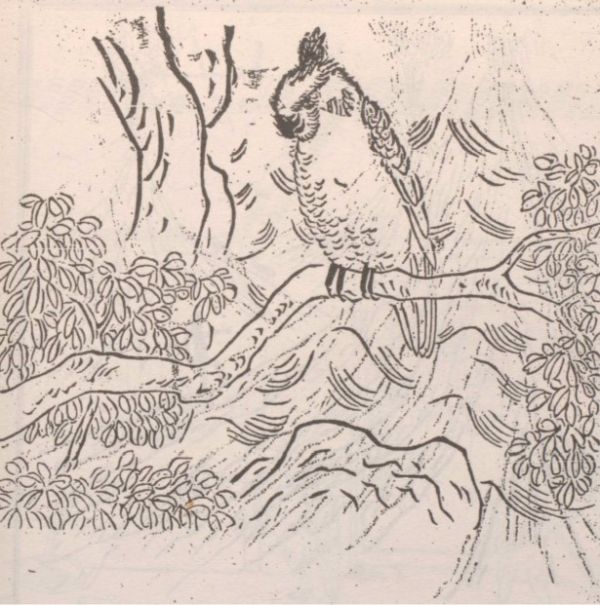 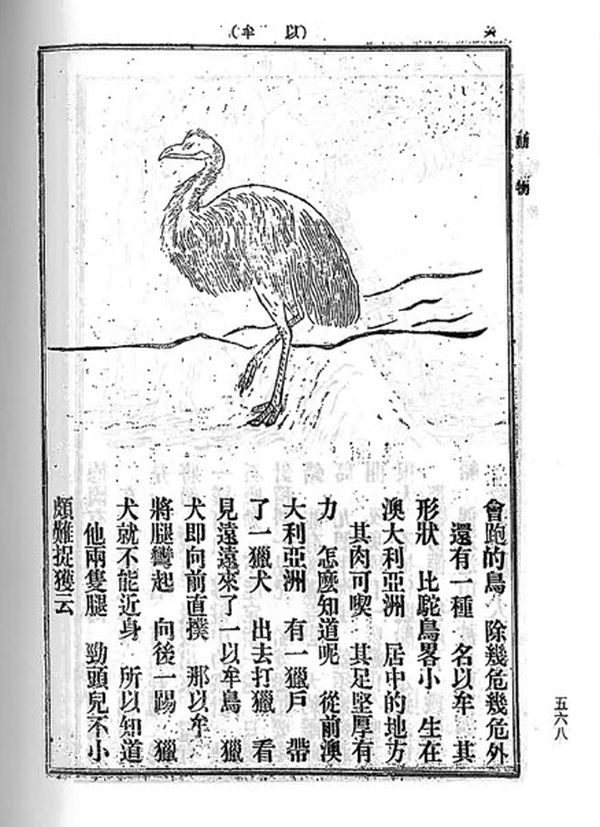 Readers are warned that emus, which are smaller than ostriches, have strong legs. The article concludes with an anecdote about an Australian man who took his dog hunting. When the dog saw the emu coming towards them, it rushed over. However, the emu kicked the dog away forcefully!

I found two articles about kangaroos in The Child’s Paper, which is not surprising. It is worth noting that the editors also included an article on the lyrebird, but the illustration provided is incorrect because the male lyrebird’s feathers do not fan out like a peacock’s. 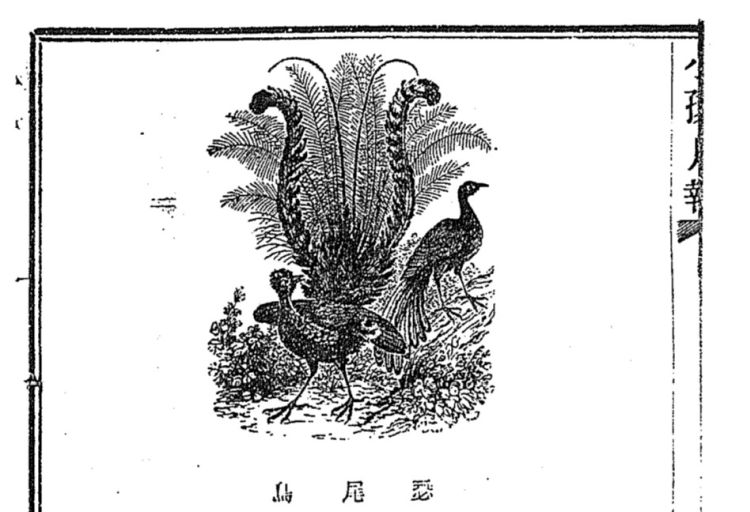 A geography book by Lyman Dwight Chapin which was in its 5th edition by 1906 includes detailed illustrations of the Australian animals mentioned above but also the Tasmanian wolf, cassowary, echidna, wombat, frilled lizard, and the bird of paradise. The glaring omission is the koala! 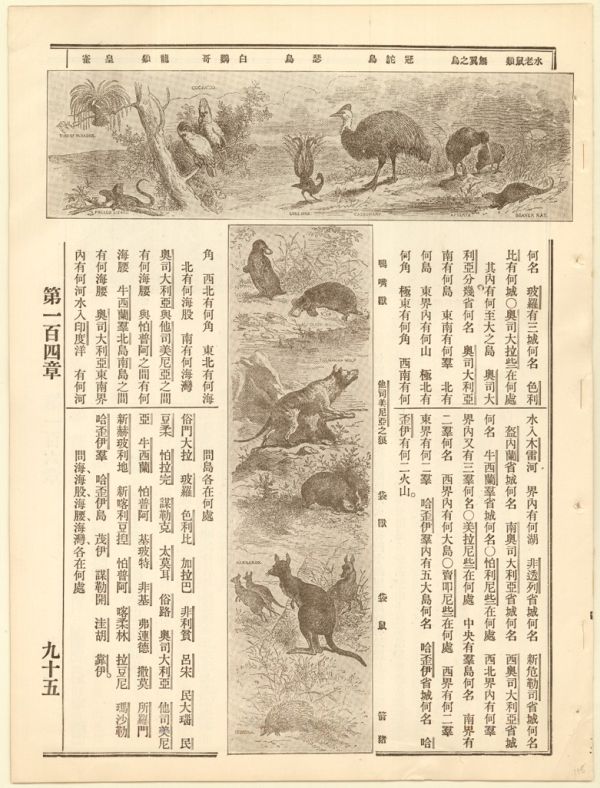 Listen to the audio of her presentation: Enlightening the Child presented on 26 October 2017.

Dr Shih-Wen (Sue) Chen completed her PhD in the School of Humanities at the Australian National University and then post-doctoral Fellowship at the Australian Centre on China in the World at the Australian National University. She is a literary historian and children’s literature scholar who has particularly made a contribution to knowledge about 19th cross-cultural exchanges between China and the West. Her 2013 book, Representations of China in British Children’s Fiction,  was nominated for the International Research Society on Children’s Literature award in 2015. Her research at the Library was part of a large project to produce a new literary and cultural history of children’s literature and print culture in China from 1875-1915, and she is especially interested in the role that missionaries, diplomats and migrants played in the transnational flow of knowledge and print culture.  She also focused on how Chinese texts for children reflect changing concepts of childhood.

Sue especially used Chinese language material, much of which is uniquely held by the National Library – including books, periodicals, illustrated fiction and graphic style novel booklets (a special collection acquired in the 1970s) and posters, as well as secondary sources and the London Missionary Society collection.  However, her project is transnational, so that the wider collections pertaining to print culture and children’s literature at the time adds value to her Chinese-language based research.

Comment:
My comment is about the translation about the platypus of Qimeng huabao, volume 10 (1903), OCS 9200 3354: “It is not a bird, nor an animal. It is a bird and an animal.” - The Chinese text here actually means “It is not a bird, nor a beast. It is a bird and a beast.” Beast here is according to OED's one definition: "a quadruped animal, as distinct from birds, reptiles, fish, insects, etc." while its Chinese counterpart "獸" can be found on Taiwan's Ministry of Education online dictionary http://dict.revised.moe.edu.tw/cgi-bin/cbdic/gsweb.cgi?ccd=FRNsav&o=e0&sec=sec1&op=v&view=0-1
Comment:
Thank you for these useful references. I will ask the webmaster to change the words.
Comment:
I truly love your website.. Very nice colors & theme. Did you create this amazing site yourself? Please reply back as I'm planning to create my verry oown site and would like to find out where yoou got this from or what the theme iss called. Many thanks! Check out my web page <a href="http://Yumuqeso.soup.io/">Poster Closeout</a>
Comment:
Good for Dr Chen. We invited her to give a talk on children's literature at Deng Chis University in central Taiwan twice, and our students and teachers were much impressed with her expertise in her field of specialization as well as with her proficiency in English.
Comment:
Thank you Professor Ho for your kind words. I look forward to sharing more about my research when I next return to Taiwan.
Comment:
<foo>bar</ foo>
Comment:
<foo>bar</ foo>