I first met Hilary Oliver in November last year, working at the Newspaper and Family History desk in the Main Reading Room. She was visiting from Newcastle, researching the life of Florence Austral, who was once one of Australia's greatest operatic singers, but whose name has disappeared into obscurity since her death, almost fifty years ago in 1968. As the Library is currently celebrating the building's 50th year since it opened in 1968, it seemed like a wonderful coincidence, and I wanted to learn more. Hilary has generously agreed to share Florence Austral's story in this two-part blog post, and help spread the word about Australia's forgotten diva...

"In the early twenties Florence Austral was the most important recording artist we had, thanks to the beauty, power and compass of her voice."
Fred Gaisberg. HMV Recordings 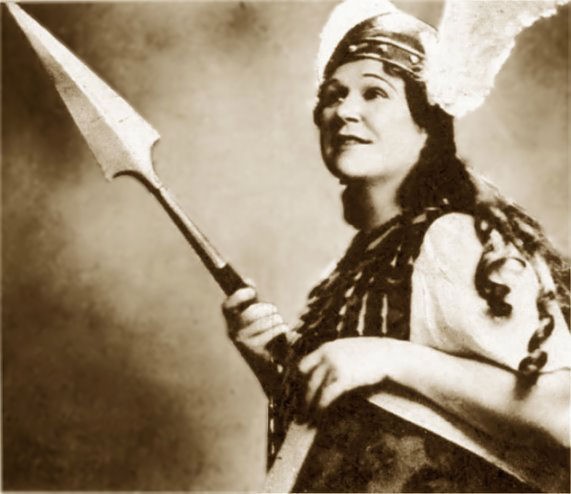 Austral in her own costume of Brünnhilde for the International Season
Royal Opera House, Covent Garden 1924

Florence Mary Wilson was born on 15 April 1892 in Richmond Victoria, the same suburb as another great Opera Singer, Nellie Melba.  Florence’s father died in 1895 and her mother later married John Fawaz so Florence’s name was changed to Florence Fawaz.

At the age of 21 Florence won 1st Prize in the Ballarat Vocal competition and commenced studies with Elise Wiedermann.  In 1917, she continued her studies with the same teacher at the University of Melbourne.

Florence sailed to New York in 1919 to study Italian Opera under Gabriele Sibella.  She immediately appeared at festivals in Boston and Chicago.  After auditioning at the Metropolitan Opera House, New York, she was offered a contract but disagreements arose over a proposed début in Chicago.  Homesick and disillusioned, she decided to return to Australia via London.  Little did she realise that success was just around the corner.

Florence Fawaz auditioned at Covent Garden and in a letter to her mother after the first Aria, Elizabeth’s Greeting from Tannhäuser, she wrote: ‘I let it rip. It fairly staggered them’.  Then after the second Aria from Aida, she wrote: ‘I nearly took the roof off!’  Clearly, she was overjoyed and received a contract and was paid 30 pounds a week to learn the Wagnerian Operas during the season which was a significant sum of money.

The General Manager of Covent Garden suggested that Florence Fawaz’s name be changed to Florence Austral.  She did so, and on 3 April 1921 Florence made her début at The Royal Albert Hall during a Sunday Concert with her new name. 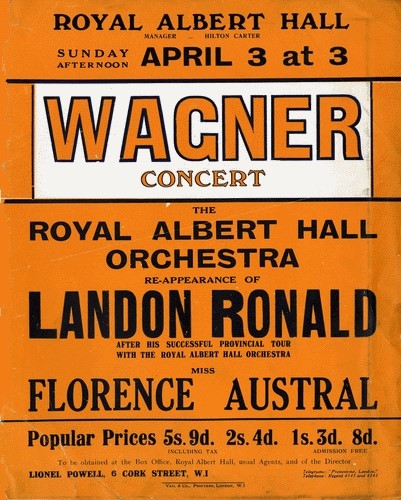 As a result of her popularity over many years, Florence Austral sang at The Royal Albert Hall 24 times!  In particular, she sang at the 10th Anniversary of Armistice Day on 11 November 1928, and she sang in front of King George V and Queen Mary on 26 May, 1932.

The 1921/22 The Royal Opera House, Covent Garden season was abandoned owing to poor funding, but she débuted with the British National Opera Company at Covent Garden.  As a last minute substitute she sang the role of Brünnhilde in Wagner’s Die Walküre.  With little or no rehearsal, wearing a costume that didn’t fit, and in the best of show business tradition, she arrived at Covent Garden that night unheralded and unknown; and awoke the next morning a celebrity.  She made 11 solo curtain calls!  The critics universally acclaimed her as one of the world’s greatest Wagnerian sopranos. 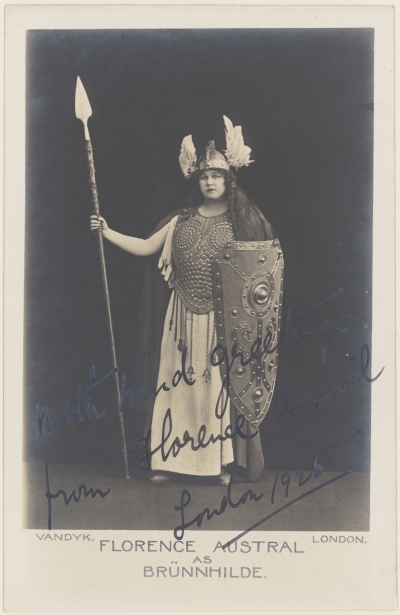 In 1923 HMV contracted Florence Austral to make recordings.  The first were through a megaphone and it is said she sang the aria from Aida at half voice because the technology of the day couldn’t record her volume.  Throughout her career, she made 102 recordings.

On 23 June 1923 she sang in Judas Maccabeus in the Handel Festival at the Crystal Palace. The celebrated aria “From Mighty Kings” was delivered with a skill rare for a dramatic soprano, and the encore that it received was said to be the first such concession to public demand since the war.  “Ocean thou Mighty Monster” from Weber’s Oberon became one of Austral’s most popular Arias.

She sang in 1924 at the Wembley Exposition in Beethoven's 9th Symphony and in London's Crystal Palace in the Verdi Requiem.  Also, in 1924 she sang Brünnhilde from the Ring Cycle at the Royal Opera House, Covent Garden. 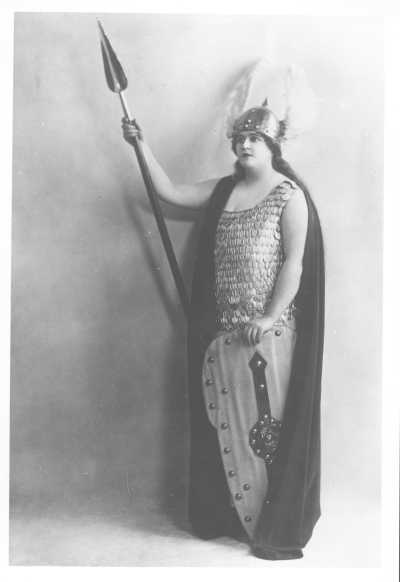 Whilst in America in January 1926 she sang at Carnegie Hall, Washington DC and Chicago but she became seriously ill with ear problems.

She recovered and took the place of Rosa Ponselle who was ill, for a concert on 12 March 1926 in Minneapolis, Minnesota.  One review says:  ‘Florence Austral takes your breath away through the powerful sweep of her voice, but she moves you deeply through her gift as interpreter as well’.

Again, she sang at Carnegie Hall and was recovering from a bout of influenza with a very demanding program but the review states:  ‘Mme Austral was on excellent terms with her audience, which applauded in fervour, recalled her after each group and induced her to give several encores’.

In Boston, the reviews were again glowing: ‘Her tones are of magnificent volume and lustrous resonance.  They are also firm-textured rich fibred, full rounded, multi-coloured, variously pliant’.  The review continues on: ‘with violin-like, oboe-like, trumpet-like, orchestra-like, it variously and fittingly sounded.  Few singers of these days in the concert-hall so clearly renew what the books say was the grand style.’

In 1927 she sang the Brünnhilde in New York in a concert performance of Götterdämmerung and the soprano solo in the B minor Mass by JS Bach.

On her next United States tour of 1928 at the Opera of Philadelphia she sang as Brünnhilde in the Ring Cycle as a guest artist. 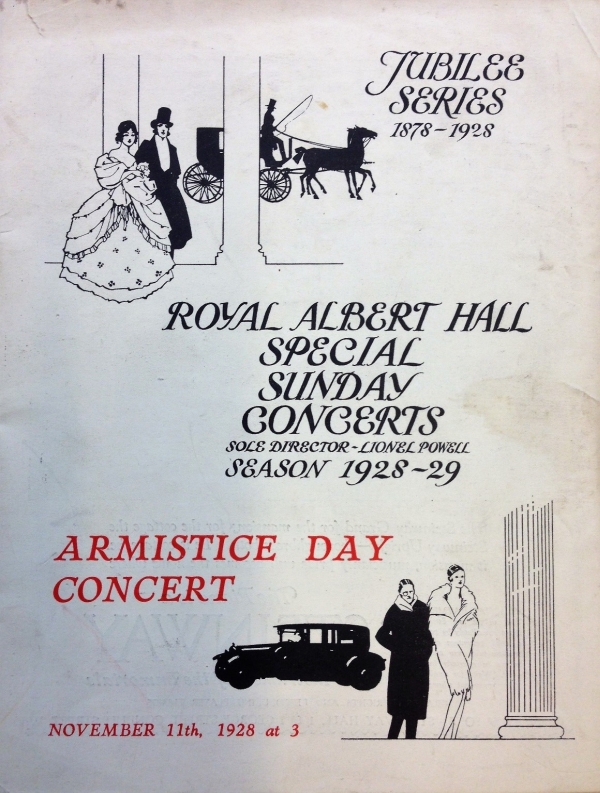 Florence Austral was adored in the UK and America.  She set up home in Hampstead and proceeded to dazzle audiences with her extraordinary gift of singing with great breath control, agility and volume.

In Part Two, we shall continue her career from 1930, when tragedy struck! Read on...

Comment:
Thank you for this comprehensive and detailed coverage of Florence Austral. Interested in even more details about her original teachers in Melbourne and and New York. Obviously a much neglected "star" during this era.
Comment:
Hi Max, In 1911 Florence commenced studies in piano & voice with Prof. Francis Constantine. But her first singing teacher was Constantine's wife, Madame Margaret Cavendish. After 12 months, Florence was put under the tutelage of George J. Andrews. In late 1913 after the Ballarat Competition, Fritz Hart (adjudicator) encouraged Florence to further her singing at the Albert Street Conservatorium and study with the senior voice teacher, Elise Wiedermann. In early 1914 Florence enrolled in a 3 year course and commenced serious studies with her. When Wiedermann moved to the Melbourne University Conservatorium, Florence followed her. She was there from 1915-1919. When Austral sailed to New York, she studied under Gabriele Sibella for 6 months. He wanted her to debut at the Met but an entrepreneur tried to insist that Austral make her debut in Chicago. She was the first totally unknown singer to receive a Met. engagement and the first singer to turn down such a booking! (From the book "When Austral Sang' by Elphinstone & Hancock, https://nla.gov.au/nla.cat-vn3261753)