Welcome to the second part of our Guest Post by Hilary Oliver on the life of Florence Austral...

Continuing on from Part One, Florence Austral had become a superstar in the world of Opera in the 1920s.  Her rise to fame was meteoric.  In the 1920s she had reviews such as: “Austral is the best soprano now before the public of this country, and possibly the equal of any soprano in the world.” (The London Observer, 5 November 1923)

In May 1930, she and her husband, John Amadio returned to Australia for a tour starting in Sydney.  Amadio was a virtuoso flautist and with pianist Nils Nelson the concert series was a great success.  In Melbourne, Florence Austral chose the prayer from Weber’s Der Freischütz as her opening aria.  This was one of the arias with which she had been most associated before her departure in 1919. 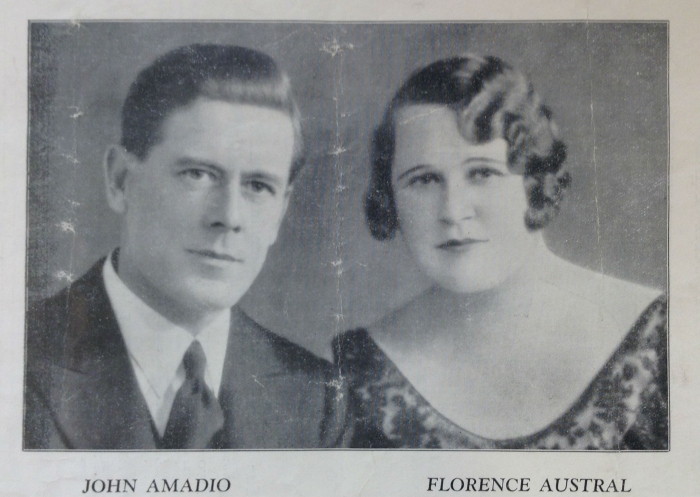 Her long-awaited contract and the jewel in the crown (or helmet) for Wagnerian singers, was the Berlin State Opera but all didn’t go too well, Florence gave one performance in Die Walküre on 15 November 1930 but during the performance, she was dizzy and found that she couldn’t stand up and her legs wouldn’t move.  Florence Austral pulled herself up with the help of Wotan’s cloak and she positioned herself against a rock for the remainder of the act.

She visited doctors in Berlin who couldn’t identify the problem but said it was neurological.  She sang Siegfried on 19 November before leaving Germany for London.  Her contract was cancelled and was paid in full.  She was devastated.

On her return to London, friend and fellow singer, Dame Clara Butt sent Florence to her doctor and after many tests, she was identified as suffering Multiple Sclerosis.  Florence did not disclose this illness for another thirty years.  Her diagnosis didn’t stop her from performing but she sang more on the concert stage than in the theatre.

In 1931 she sang in America and Holland, then returning to London where she made her last recordings with HMV.  This was due to the Great Depression and the classical market being affected.  However, the radio technology had improved and in October 1931, Austral sang Brünnhilde’s Immolation, conducted by Sir Adrian Boult live on air.  Although the orchestra was a little loud in parts, it was successful and she continued broadcasting as the medium was ideal for her.

The 1932 American tour took her to 3 major operatic centres.  Then, returning to Britain, she took on a nationwide tour of Tristan and Isolde, partnered by Walter Widdop.  Some of the performances were conducted by Sir Thomas Beecham who was fond of Austral. 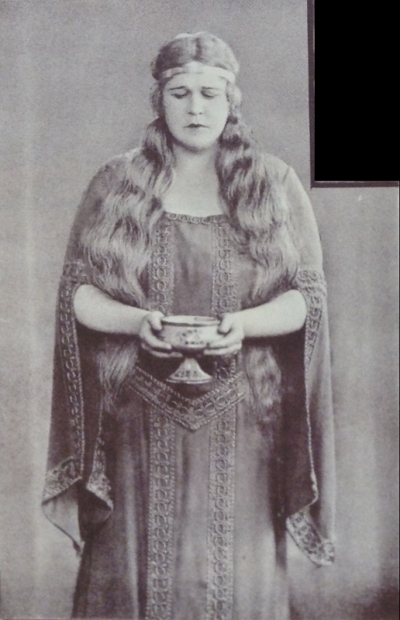 In 1933 Austral returned to Covent Garden to sing a performance of Die Walküre opposite Friedrich Schorr and Lotte Lehmann, and a single performance of Siegfried with Lauritz Melchior.

Florence Austral was a down-to-earth and modest person.  She was good natured, unpretentious and generous.  She loved entertaining and spending time in the company of friends and associates. 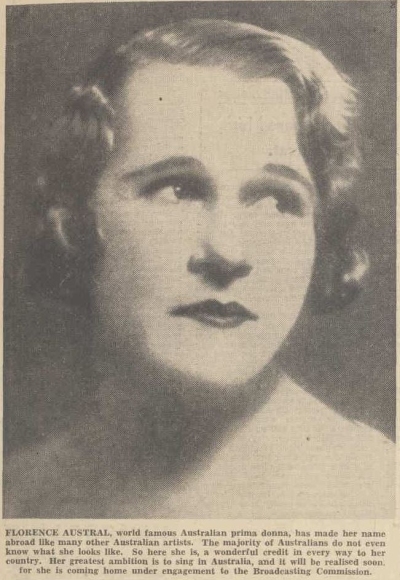 Amadio and Austral sailed to Australia 1934 where she was welcomed like a superstar.  The accompanist hired for the ABC concert tour was sought-after Belgian pianist Raymond Lambert a fine soloist and accompanist.  Austral commented “it is wonderful to sing with Mr Lambert, for he is really a brilliant pianist and can play my most difficult songs – something that very few accompanists can do.” 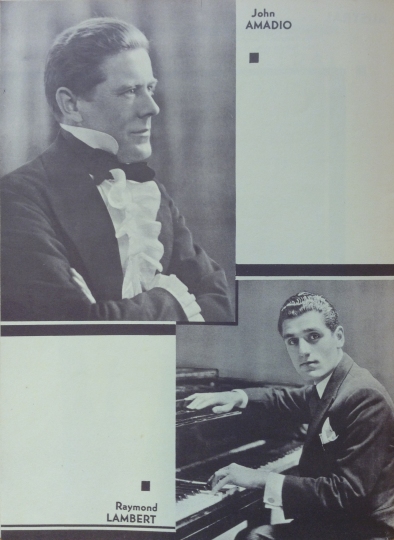 In Australia between 1934 and 1936 she toured with the Benjamin Fuller Opera Company, singing in her Wagnerian roles, plus as Marschallin in Der Rosenkavalier and, quite surprisingly, in the colour role of Leila in The Pearl Fishers by Bizet. 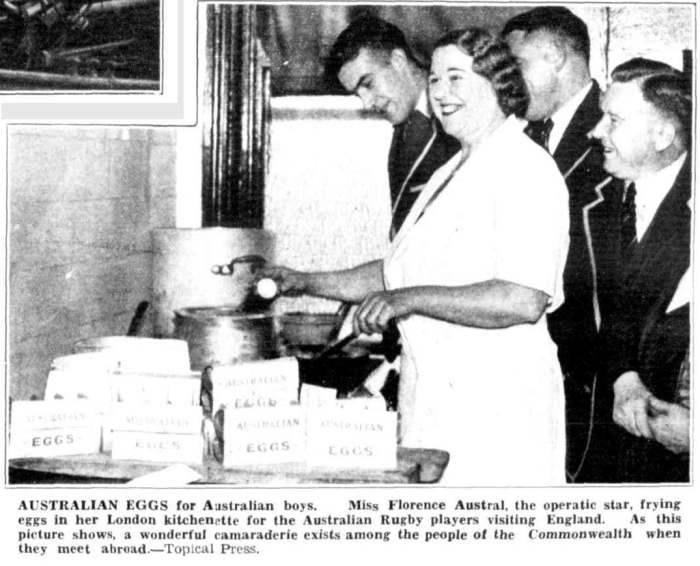 Throughout the 1930s, as well as touring Australia, she made concert tours in England, North America, Holland and South Africa.

During the war, she remained in London and performed for the war effort.  Fred Gaisberg (HMV) stated: “besides doing canteen work, Austral makes impossible journeys to all sorts of out-of-the way places to sing for the soldiers …. Good natured as ever, she gives them the stuff they want.”

The greatest single quality Austral possessed was her immense devotion to her husband.  Although they had separated, they had continued to perform together.  Her love for John Amadio had no apparent bounds and continued until the day he died in 1964. 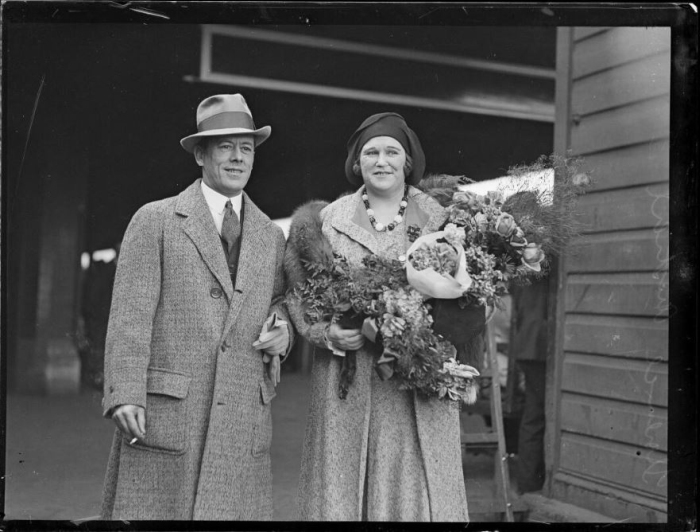 In 1946 Florence returned to Sydney. With the assistance of Eugene Goossens, she joined the teaching staff at the new Music Department in Newcastle and worked from 1952 – 1959 until she was too ill to continue. At this point, Florence Austral disappeared from the public eye.  She became a private citizen. She was Florence Amadio, and not much was known of her. With little money, she lived in a modest house in the Newcastle suburb of Merewether, and although there was a benefit concert for her, not much money was raised.

Florence’s mother died in 1925 and on her gravestone bears the inscription “Mother of Florence Austral”. Florence died intestate in a Mayfield Nursing Home at the age of 76 on 15 May 1968; and her plaque is very simple: 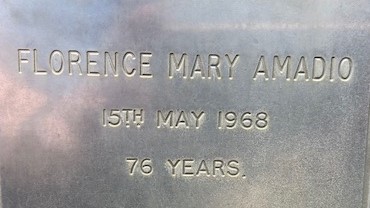 Very few people around her realised how famous she had been and how much joy she had given to the world.  Her belongings were sold off and little is left but her memory lives on.

Thank you Florence Austral for your recordings which continue to give pleasure to us all.

This project was inspired by fellow Novocastrian, Phil Warren and we have both gained great satisfaction from researching the memory of this talented Australian. Hilary Oliver.

Florence Austral: one of the wonder voices of the world
by James Moffat in association with National Library of Australia
Published by Currency Press, Paddington, NSW, 1995