This new acquisition arrived too late to be considered for inclusion in the National Library’s The Sell exhibition, which already has three examples of corset advertising, from Belgian and English companies P. D. Corsets and Pretty’s, as well as the well-known Australian brand Berlei. 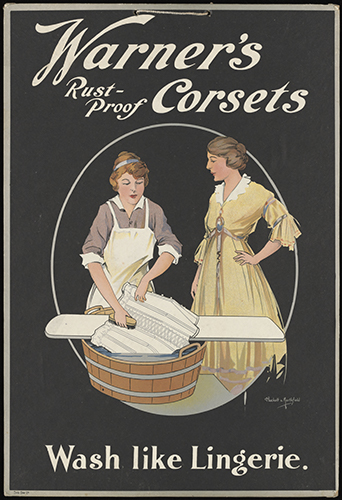 Warner’s corsets were also imports, manufactured by a company established in New York in 1874 by brothers Dr. Lucien and Ira De Ver Warner. Their first product, their “coraline” corset, was boned with a flexible textile material, said to be superior to rigid steel, horn or whalebone. In 1876 Warner’s moved their manufacturing operations to Bridgeport, Connecticut, and from this base were extremely successful, exporting their products around the world. The company continues today as Warnaco, although their Bridgeport factory is now an industrial ruin.

The Library’s Warner’s rust-proof corsets advertisement was produced in Melbourne, and is a hanging sign for display in a shop, colour lithographic printed on paper, on its original backing board, with two eyelets in its top edge, 400 x 280 mm, and is signed in the image lower right ‘Hackett & Northfield,’ with a printer’s credit ‘Syd Day’ lower left.

The artist James Northfield (1887-1973), who is represented in The Sell with a Swallow & Ariell’s biscuits & cakes poster, was one of Australia’s best known commercial artists from the early 1920s to the late 1950s. He was born on a station near Inverleigh, Victoria, and after attending Geelong West State School studied art with George King (1872–1950) at the Gordon Technical College in Geelong. Northfield was employed by H. Thacker Printers in Geelong before he joined F. W. Niven in Melbourne. He then seems to have gone into business first with William Henry Hackett (1881-1962) and later with W. H. Hackett’s step-son Joseph Elnor Hackett (1895-1939).

Both Hacketts appear to have been principally printers. Northfield’s partnership with the elder Hackett was dissolved in October 1918. Only one other major work from this period seems to have survived, Hackett & Northfield’s large four-sheet World War I recruiting poster Come on boys, follow the flag!.

The Hackett & Northfield artwork for Warner’s corsets was able to be dated reasonably precisely with a 1918 newspaper advertisement found in Trove with an almost identical line illustration and washing instructions. 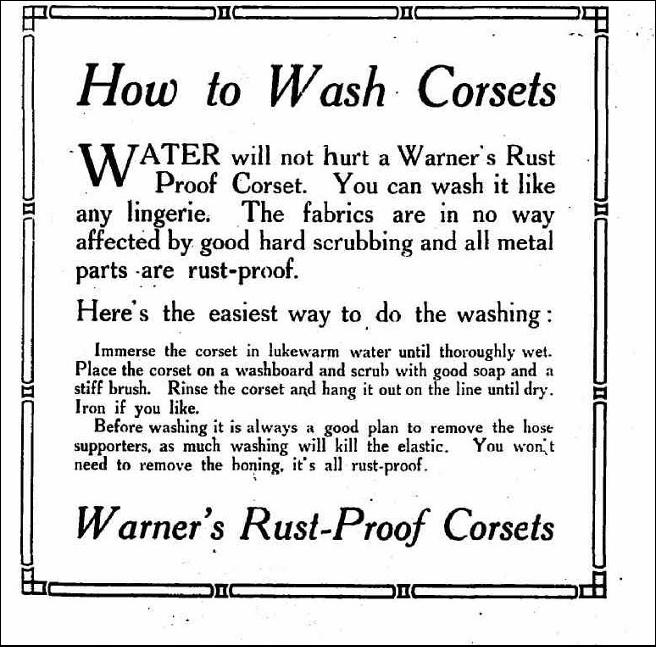 Washing clothes re-emerges as a topic of interest in The Sell in the 1950s, with the woman depicted in the exhibition’s signature image contemplating Which Hills Hoist is best for me, accompanied by a Simpson Australia brochure, Hooray! It’s washday!—my day off! Postcards reproducing this image are available from the National Library Bookshop. 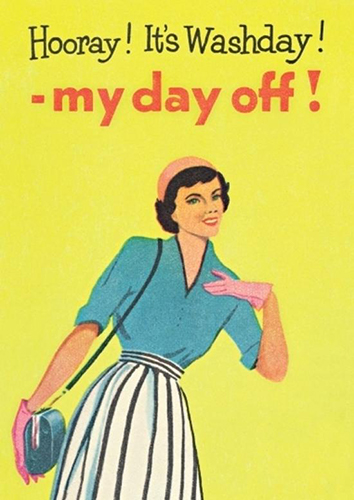 Who knew corset rust was a serious practical problem encountered every washday? The Warner’s corset advertisement also suggests class, with the younger, better dressed woman with her hand on hip supervising the slightly older woman dressed in the apron who is doing the work (although not particularly well off families may also have had domestic help). The simple long white scrubbing board is another interesting feature, at odds with the wood-framed ribbed zinc washboard (now used mainly as a musical instrument by bush bands) one might otherwise expect. However, except perhaps for Mistress Vera (shown adjusting her corset to meet the expectations of her specialised clientele), most women today will probably cheer hooray that they are no longer expected to wear corsets, or expected to undertake a full day of laundry work by hand with a scrubbing brush and a wooden washing trough. Please do take the day off and visit The Sell and go on to explore other items from the National Library’s collection.

Comment:
Wonderfully interesting! Thank you very much. I live in Perth, so I can't always fly to Canberra. Therefore I'm glad to get your monthly Newsletters. Kind regards, Marieluise Schmidt
Comment:
Good Morning, I remember the wash tubs next to the old ringer washer of grandmother's which was in the basement. There was a bar of soap Feld's Napha which we used to scrub dirty t shirts and underwear. In winter in MI. we had the clothes line in the basement. atk
Comment:
There is a postcard published circa 1906 with back showing H. Thacker lithographer, Geelong.The back is nicely done with sketch of a kangaroo and emu and wattle flowers.The front has a drawing of a musician playing a flute. The artist signed .TS. Perhaps the artist was employed by Thacker?