Stop the presses
The Bulletin's back

‘To-day we send broadcast throughout the colonies the first number of THE BULLETIN … The aim of the proprietors is to establish a journal which cannot be beaten – excellent in the illustrations which embellish its pages and unsurpassed in the vigor [sic], freshness and geniality of its literary contributions. To this end the services of the best men of the realms of pen and pencil in the colony have been secured and, fair support conceded, THE BULLETIN will assuredly become the very best and most interesting newspaper published in Australia.’

All this for a mere fourpence an issue. (Five years later, there was a big saving if you opted for a yearly subscription – only 24 shillings. And if you wanted to place an advertisement, you were up for five shillings an inch in 1885.) 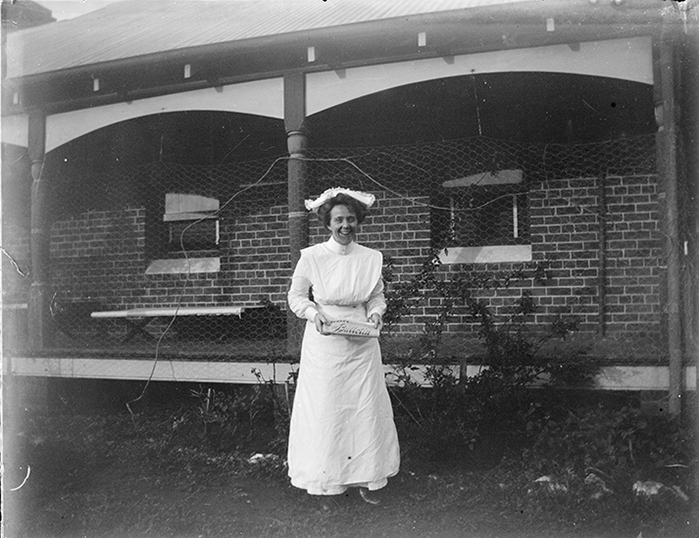 But wait, there’s more good news. The political, social, historic and really cheeky stories that made up this iconic Aussie publication are now available for everyone to access online via Trove.

From issue 1, Number 1, The Bulletin showed its hand. First on the agenda was to take on ‘Granny’, The [Sydney Morning] Herald.

‘The Herald, which has of late been a deliciously ‘bizarre’ farrago of piety and puriency, is apparently the guide, counselor, and friend of Lord Augustus Loftus in all matters affecting public morality, and in all concerns beam on the relations between the authorities and the Press.’

The Bulletin, first published on 31 January 1880, was a magazine like no other. It was funny, serious, irreverent, yet often ground-breaking. It was seen variously as both too right-wing and too left-wing and under its masthead, gave birth to some of this nation’s best young writers.

It’s all there. The news stories covering the first days of the colonies. Social news, politics, sport, literature, cartoons.

The magazine was not backward in coming forward when it came to help filling the news columns – it seems that crowdsourcing the news is not a new phenomenon:

‘To Our Readers: The Editor of the Bulletin will at all times be glad to receive information from correspondents living in town or country or the other colonies on the subjects of general interest, more especially, on matters connected with sport, the drama and communications from ladies will be especially welcome.’

The front page was always special, if only for the ads that often took up most of the page, accompanied by a serious picture of someone important, usually sporting a beard. We spotted only a small handful of women making the cover (mostly without beards). In fact, it was a woman who graced the first issue on 31 January, 1880 – and we can see why. She was not just any woman. 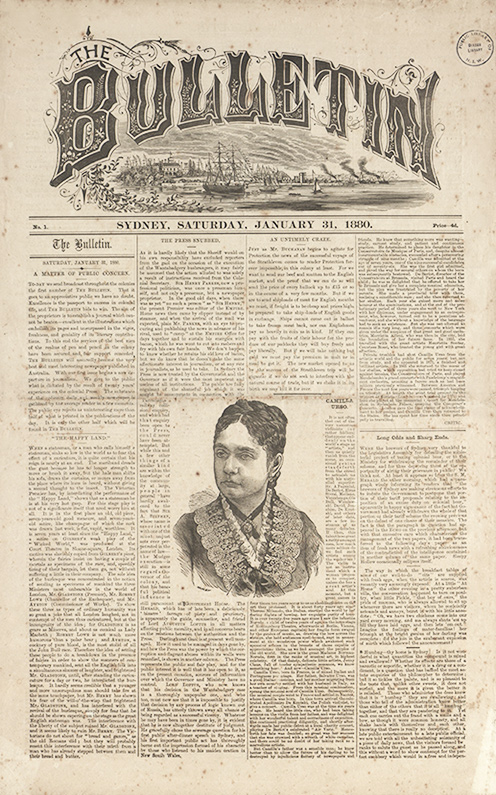 Her name was Camilla Urso and she was a violinist of clearly great reknown – and with more than a few strings to her bow. The editor surmised:

‘How often do we find such artists among the weaker sex? The violin is not an instrument which a woman proposes to conquer unless she has a great artist’s soul.’

So great was her success at a charity concert, she was ‘crowned with a wreath of white camellias, and there could be no doubt of her taking rank as a marvellous artiste’.

It seems her father was no slouch in his field either.

‘He knew better than to allow the future of his darling to be destroyed by the injudicious flattery of newspapers and friends.’ He knew that something more was wanting in the form of ‘earnest study and patient and continuous practice.’

If you had about two days to spare to read all the way to the end of this glowing piece, you would discover that she also happened to be a genius.

Although the handsome Miss Urso made page 1 for the first issue, the magazine's editors seemed quick to shift back to bearded blokes. For example, the very handsome Government Astronomer, one Mr H.C. Russell (sporting, naturally, a very handsome beard), graced the cover of the 9 October issue in 1880. There's not much said about his back story – except for this poignant piece at the bottom of the page describing how fame eludes the scientist (unless you were lucky enough to be featured on the front page of an esteemed publication such as The Bulletin, of course):

‘The true student of Science has few commonplace consolations. He never experiences that elation of popularity which is a kind of ecstasy to a politician nor the inflation of gratified vanity so observable in a successful man of letters.’ 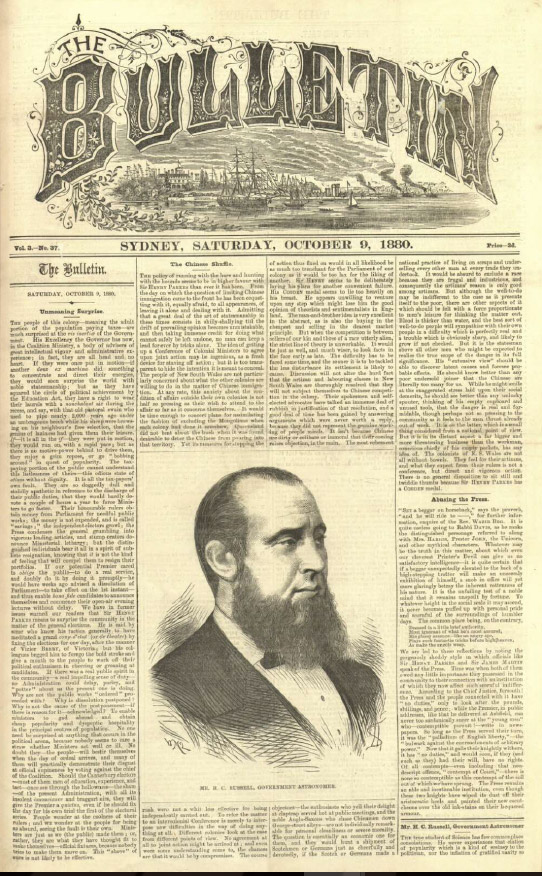 We love the space the early editors gave to our great writers. Henry Lawson, pictured below with co-founder and editor of the magazine Jules François Archibald, was a popular favourite, with the 23 July 1892 issue giving over about half of page 21 for his soon-to-be-very-famous-work, The Drover’s Wife. (This one you'll have to drop in to our Treasures Gallery to see in the flesh). 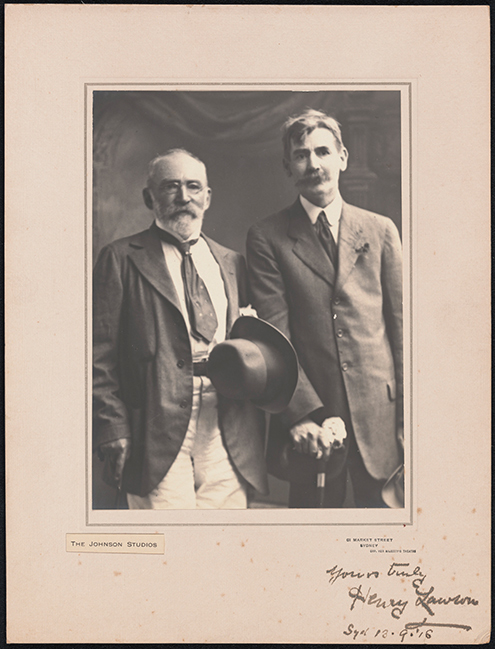 ‘Woman Items’, ‘Denominational Drops’ and wise words to live by

The Bulletin favoured columns to broadcast its short, sharp bursts of news and opinion, covering all manner of topics. One of our favourites is the sternly named but clearly female-oriented column Woman Items, offering fascinating tidbits written just for the interest of ladyfolk, including the following gem:

‘The ladies who attended a bazaar in aid of Str Thomas’ Church on Saturday at Manly Beach did not let the opportunity pass for displaying pretty toilettes, some of which were exceedingly effective.’

(We cannot imagine what that means.)

Another column entitled Political Points also looked to be a favourite – and illustrates to us today how some things never change:

Perhaps the column with the catchiest title, Denominational Drops reported only the ‘gospel truth’, and some quirky stories to boot. In one issue, we learn news of the Reverend Stopford Brooke, of Brighton, who severed his connection with the Church of England and became a Unitarian. His reasoning, delivered in an explanatory sermon: he ‘no longer believed in miracles.’

And then there was the invaluable wisdom of the day. A lively old bachelor's response on being advised to get married?

‘I can’t do it because I could not marry a woman I didn’t respect, and it would be impossible for me to respect a woman who would consent to marry me.’

Last but not least were the ads. And they were featured everywhere. From 5 pounds for a set of artificial teeth, to coal spruiked, in 1882, from the ‘newest and nearest’ mine at Coalcliff for the ‘cleanest, cheapest, thriftiest household and steaming coal in the colony. 18 shillings per ton net.’  Names familiar even today graced the pages, like Anthony Hordern and Sons at Sydney’s Haymarket boasting ‘the original cash system firm. No branches. No other place of business.’ Or Woodward’s Oyster Rooms, conveniently located ‘next to the Theatre Royal in Castelreagh St, Sydney.’

Some of the most intriguing advertising content was of the ‘blink and you'll miss it’ variety. This gem comes from page 7 of the 24 October 1885 edition, right under the ad for the Australian Mutual Fire Society, where one Professor M. B. Taylor of 68 Elizabeth Street in Sydney seems to be offering menfolk a return to lost youth and vitality:

‘TO WEAK MEN suffering from the effects of youthful errors, early decay, lost vitality, premature decline, nervous weakness, etc., I will send you particulars of a certain, simple, and sure means of self cure, Free of Charge.’

The appeal of The Bulletin then, and probably still today, was that it had something for everyone. These were our first stories: the real stories about what happened in the colonies, good and bad, to say nothing of the colourful folk who inhabited them.

Read the first six years of The Bulletin on Trove – it won’t cost you a cent.

You can also check out an original copy of the magazine on show in our Treasures Gallery.

The digitisation of The Bulletin was made possible with support from the State Library of NSW and AustLit.