Hollie Gill is a 2017 Indigenous Graduate of the National Library of Australia. This blog was written as part of a research project aimed to increase awareness of Indigenous resources within Trove and promote content in a culturally sensitive way.

Warning: Australian Aboriginal and Torres Strait Islander people are warned this blog contains information about deceased peoples, and historical viewpoints that might be considered offensive.

The ANZAC legend holds a special place in the hearts of many Australians. But throughout history, Indigenous Australians have largely been excluded from this story. This has come to be termed an historical silence. However, their story is not as silent as it may first seem. The ANZAC Centenary has shone a spotlight on commemorating Indigenous Australians who represented Australia during times of conflict and peacekeeping.

There are a wealth of historical resources depicting Australian life during wartime, including details on the role of Australia’s Indigenous service personnel. Trove holds many of these resources, including newspapers, books, journal articles, photographs, oral histories, and objects.

Enlisting for King and Country 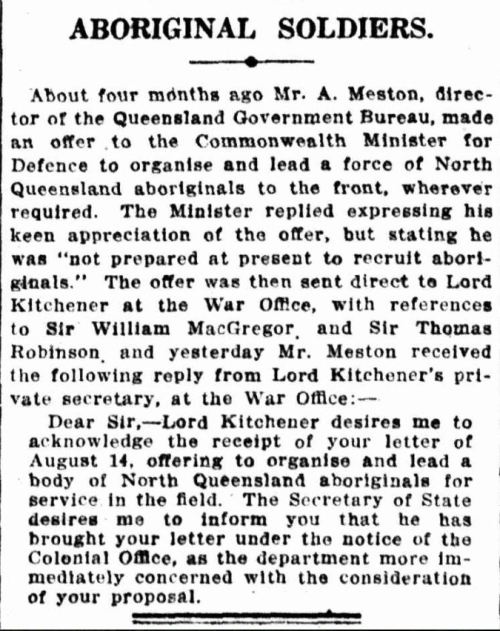 For Indigenous Australians, enlistment in WW1 was heavily restricted. An amendment to the Defence Act 1903 in 1909 ensured those who were not ‘substantially of European origin or descent’ were unable to fight for Australia. However, the final say came down to the medical officers - it was up to them to determine if enlistees fit the criteria in the Act.

In 1915, an article syndicated across several Australian newspapers stated the Commonwealth Minister of Defence was ‘not prepared at present to recruit aboriginals [sic]' [1]. However, by 1917, this attitude had changed when catastrophic loss of life took its toll on Australian numbers at the front, with "half-castes" and "full-bloods" accepted for service.

Many have questioned the motives behind Indigenous Australians' desire to enlist to fight for a nation who had been responsible for so much oppression of their kin and culture. Some historians have suggested they were trying to prove equal capabilities, diminish racist views, and push for equal rights – a motive represented in many newspaper articles. However, it is not incomprehensible that Indigenous Australians would want to fight to protect their home and country. Furthermore, a romanticised notion of wartime and mateship was another likely influence among many young men during the early 1900s. Whatever their motives, exact numbers of Indigenous peoples who bravely served in WW1 are unknown, however, some estimates put this number as approximately 1000 individuals.[2]

Newspapers Publish a Call for Equality 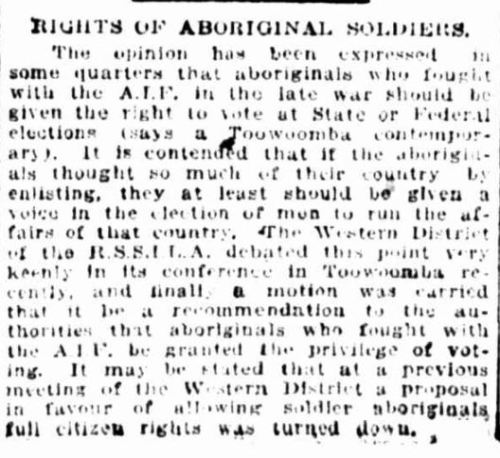 Following WWI, returned Indigenous ANZACS did not receive the public recognition or compensations awarded to their white Australian comrades. Upon returning, the expectation many had of equal social rights – including full citizenship – were quickly dissolved. However, the interwar period saw a push for equality and recognition, supported by organisations like the Returned Sailors and Soldiers Imperial League of Australia (RSSILA). Although this push was initially unsuccessful, advocacy for equal rights for returned Indigenous Australian service personnel never disappeared, and gained ground during and after WW2.

WWI veteran and Indigenous Australian man, Eustace John Bews, wrote to The Advertiser in 1945 and 1946 advocating for ‘…full citizenship privileges for everyone [sic] of our colored [sic] soldiers, who voluntarily wore His Majesty’s uniform on active service abroad.’[3] Bews asserted that his fellow Indigenous soldiers were loyal, and fought for the freedom of Australian people with bravery, just like their non-Indigenous comrades. He felt it unjust that returned Indigenous Australian service personnel should be absorbed back into control of "protection" protocol and called the granting of citizenship rights a sign of goodwill by the government.

Given the social and political climate, public advocacy for equal rights of Indigenous Australian service personnel was a brave notion at the time; but necessary and commended nonetheless. Bews was not alone in his endeavour. Following the release of Bews’ first letter in 1945, Herb Milera also wrote to The Advertiser in support of Bews' remarks. Following WWII, returned Indigenous service personnel were granted the right to vote but were still denied citizenship. 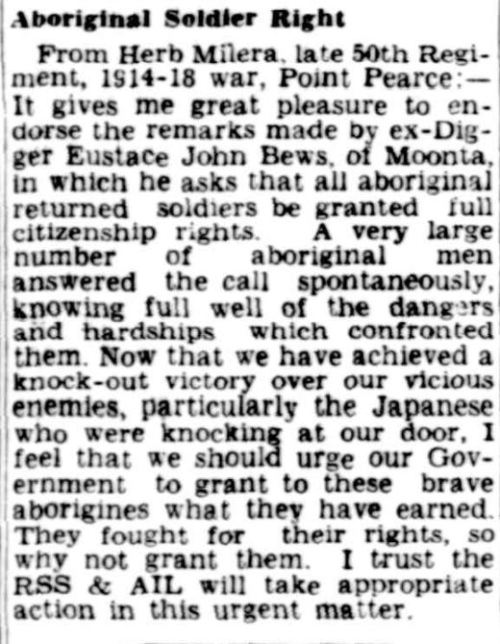 The push for national public commemoration for Indigenous Australian service personnel began long before the ANZAC Centenary. In 1981, QLD MP Don Cameron called for assistance in The Canberra Times to identify names of Australian Aboriginal and Torres Strait Islander peoples who served in the armed forces during conflicts from WWI to the Vietnam War. Six years later, in 1987, The Canberra Times reported that the names of 1,400 Australian Aboriginal and Torres Strait Islander servicemen were handed to the Australian War Memorial. The list has since grown and there have been many public events, exhibitions to commemorate and celebrate the role of Australia’s Indigenous people during wartime. 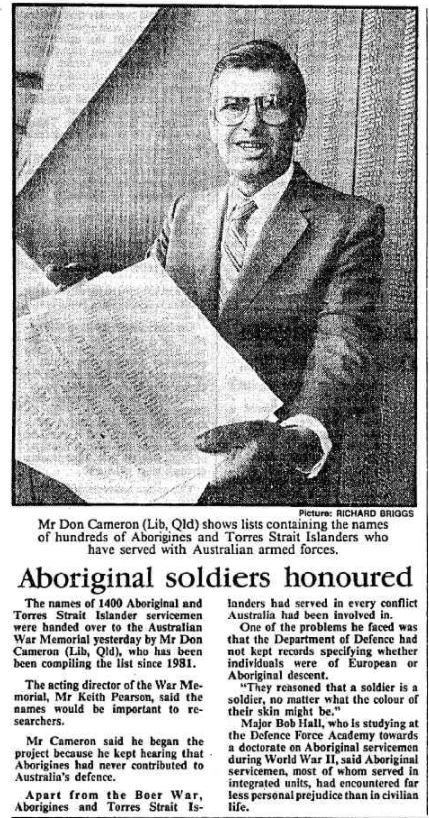 In the 20th century, the fight for equal rights of Australian Aboriginal and Torres Strait Islander people came to the fore. This blog has detailed just a small part of that story through historical newspaper articles available on Trove, showing a handful of individuals that advocated on behalf of Indigenous Australian service personnel.

As well as books, newspapers and journals articles, there are many user-created lists in Trove that highlight content on Indigenous Australian service personnel during the 20th century. Oral histories, like those found in the Indigenous ex-servicemen and women oral history project on Trove, are another excellent resource for uncovering more details on the personal experiences and memories of Indigenous ANZACs.

What story can you surface on Trove?

Comment:
Brilliant blog Hollie. Enjoyed reading this.
Comment:
Thanks Hollie, A great blog post showcasing your research. Trove really is wonderful.
Comment:
Thanks Clare. It is amazing how many stories you can find once you getting digging on Trove.
Comment:
Thanks Hollie for sharing this blog. In Dubbo, the Western Plains Cultural Centre is currently exhibiting ‘Indigenous Australians at war from the Boer War to the present’ from the Shrine of Remembrance Melbourne. Your blog informs this exhibition and I will share it with others.
Comment:
Thank you Sally. It is great to see our First Nations ANZACs being remembered right across the country in many different ways.