Warning: Australian Aboriginal and Torres Strait Islander communities are advised this blog post contains images and names of people who are deceased, and historical viewpoints and terminology that may be considered offensive.

A sense of recognition washes over me as I look at the sepia-toned postcard featuring four Indigenous women and two Indigenous children wearing European clothing and wrapped in woollen blankets. The photograph was taken on my ancestral country in Albany, Western Australia during the early twentieth century - these women are likely to be kin. However, I will never know if they are indeed my family, as they have not been named, but are instead labelled simply as "Natives". 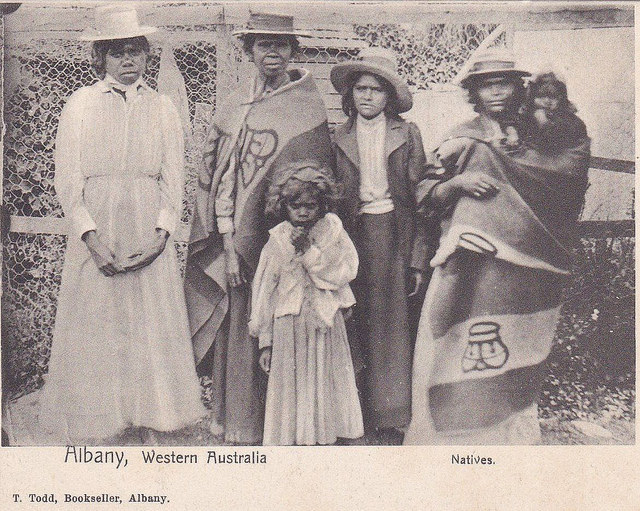 Historic photographs provide representations of a time when the massacres of Indigenous people painted the country red and created inter-generational trauma, through dispossession of land, assimilation of culture and forced removal of children.

The photograph above is a key example of a Western scientific ideal to record information around cultural practices of Indigenous Australians, who were perceived as a dying race following colonisation. Stripped of traditional clothing, the identities of the women and children on the postcard have been erased. The European-style dresses are not suited to the climate or environment of Albany, nor the daily physical activities these women participated in.The woollen blankets do not have the same warmth of traditional kangaroo skin cloaks; in fact, such blankets were often known to be deliberately infected with measles and other diseases previously non-existent in Australia. But the most disturbing aspect of this photograph is the disregard for these proud people's names, relegated instead to a sub-human category.

It wasn’t until the 1967 referendum that Indigenous Australians were seen as more than flora and fauna. My Mum, Nan, other family members and Indigenous Australians born prior to 1967, were not classified as human by the Australian government until this time. This act of recognition led to greater rights for our people and a resurgence of pride to actively practice and celebrate our culture.

The NADOC ’86 exhibition empowered Indigenous artists for the first time to promote their rights and a vision of self-representation in an act of post-colonial intervention that openly challenged non-Indigenous propaganda… this exhibition was the first time that black faces were seen in photographs outside racially bogus scientific/anthropological journals, kitsch/postcard imagery and, more often than not, negative news and media stories.

The NADOC '86 Exhibition, for the first time, placed Indigenous Australians behind the lens. Documentary photographers such as Mervyn Bishop, Tracey Moffatt, Ricky Maynard, Destiny Deacon, Michael Riley, and Brenda L Croft, led the way for Indigenous self-representation, while highlighting the social and political climate of Australian history. Combating the narrative of a "dying race", their art incorporated humour, satire and serious reflection on the past treatment and representations of Indigenous Australians.

Most importantly, Indigenous photographers replace nameless "Natives" with positive representations - demonstrating Indigenous culture and peoples that are alive and thriving.

Behind the lens: cultural sensitivities

Photography came to be understood as a representational practice in need of ethical guidelines, and photographs began to be reconsidered as artifacts of cultural knowledge embedded in multiple regimes of value.

Due to the traumatic history of colonisation in Australia when Indigenous knowledge, cultural heritage material, and even our ancestors were taken without consent, there remains unease around the use and access of Indigenous materials. In Australia there are over 770 Indigenous groups, each with their own cultural practices and beliefs. Indigenous Australians need to exercise caution when accessing cultural information and materials, as it can be dangerous to gain knowledge or view certain images not culturally permitted.

Culturally, I am allowed to view photographs of family members who have passed away, but some Indigenous groups are unable to. Some groups are also unable to say the first name of someone who has passed away, such is the case with the recent passing of Yolngu musician Dr G Yunipingu. Another example of culturally-sensitive material includes images of ancestral remains, and of ceremony or secret/sacred materials.

Over the past few decades, institutions with collections of Indigenous items in Australia have developed guidelines to ensure cultural sensitivities are met regarding the access of these materials. The reasoning behind this is to share knowledge ethically (especially considering issues around provenance of some collection items), but most importantly to ensure cultural safety for Indigenous peoples accessing materials.

Connecting past to present

The power of photographs allow me to see my kin, and connect with my family and culture across time and place.This is how I felt when I came across a photograph of my Nan on Trove. Nan is Minang (Aboriginal Australian) from Albany, Western Australia. In her hands are photographs of her parents (my great-grandparents) and in the background is a photograph of my Uncle (her son). 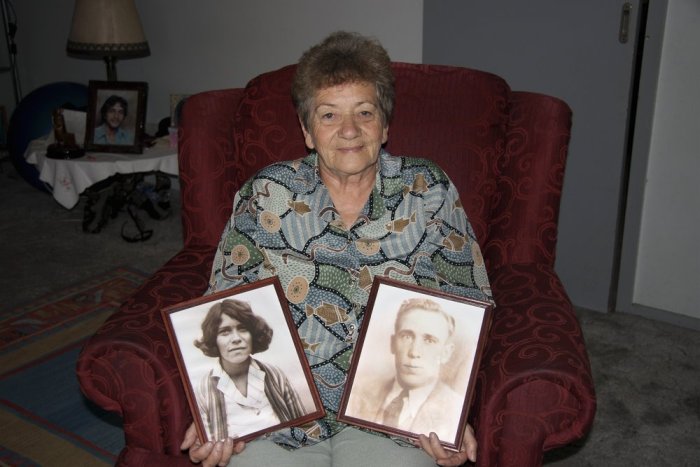 I definitely did not expect to see my Nan’s beautiful face staring at me from my computer. The connection I feel towards her strengthens while I look at the photograph, it makes me pick up the phone to chat with her; modern technology allowing me to both see and talk to my Nan even though I live interstate.

While I was initially shocked to find a photograph of my Nan online, and found the postcard distressing due to the historical context that it was captured in, having a record of the women, children, and place, there is the opportunity for reconnection across time, place, and family.

To learn more about Australian Indigenous documentary photographers and filmmakers, explore the resources in this companion Trove list.