Back to school at Bamaga High 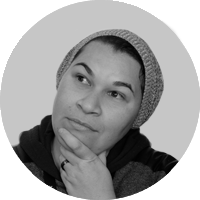 Aboriginal and Torres Strait Islander People are advised that this page and links contain names and images of deceased people.

It's not every day you find a high school photograph of your father (front row, class 8A, third from right) in a school magazine at the National Library of Australia, yet this is exactly what happened to me.

As a former school captain and student at Bamaga 6-12 Campus (now Northern Peninsula Area State College), I have many fond memories of my high school.

Bamaga State High School lies 40 kilometres from the northern-most point of Australia, in Far North Queensland. It is the same school my father George Ropeyarn, my siblings and extended family members attended - you could say it is a bit of a family tradition. Even my mother is featured in the magazine, not as a student but as a teacher, curriculum coordinator and A/Deputy Principal. You can find her on page 9 of the 2015 school magazine sharing her yearly report.

In this blog, I want to share a brief history about the Bamaga school magazines, highlight some culturally significant stories and talk about why digitising this collection is important for the five remote communities of the Northern Peninsula Area. 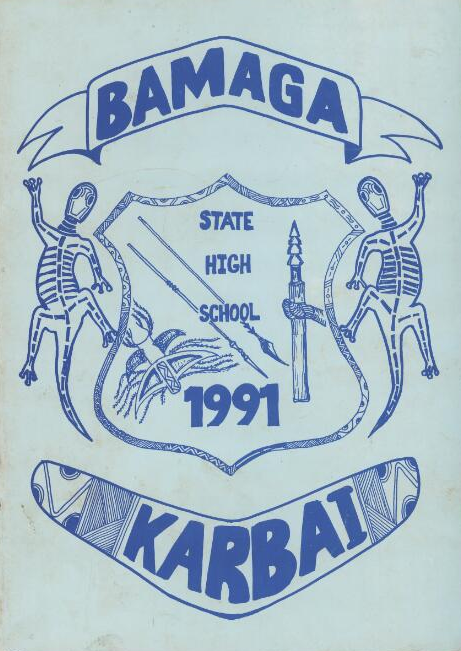 Bamaga State High School opened in 1973, enrolling 200 students in years 8, 9 and 10. Years 11 and 12 were not established until 1976. Before this, the only school that existed at that time was Bamaga Primary School, which had opened in 1969. For many mainland students like my father George, Thursday Island State High School (now Tagai State College) was their only option if they wanted to pursue their secondary education further. The establishment of Bamaga State High School was a welcome relief, a proud moment in the history of education for the area; finally, the five communities had their own high school, and it was dubbed “Australia’s northernmost mainland high school”.

The school's emblem was designed by a year 10 student, Jimmy Oui, in 1973. The emblem features two culturally significant elements, the Karbai (pronounced kar-bye) or white crane and a map of the Tip of Cape York. Coming together in friendship, celebrations of many Aboriginal and Torres Strait Island families and the geographic location of Bamaga are all encapsulated in the image of the Karbai flying over the Tip. Each edition of the magazine from 1973 to 1991 includes the emblem and its inscription. 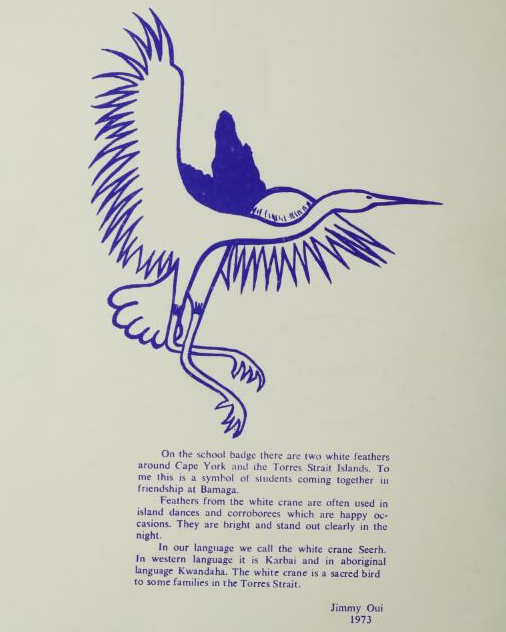 Pioneer educators Mr. Jomen Tamwoy of Injinoo (Cowal Creek) and Mr. Adikuiam Adidi of Bamaga (pictured below) helped establish early education in the remote communities of the Northern Peninsula Area. Mr. Tamwoy, who was originally from Badu Island (Near Western Island) in the Torres Strait was appointed the Department of Native Affairs' first government teacher and relocated to Cowal Creek. He helped establish the Cowal Creek Anglican Church Mission School in 1915, teaching the village children under a tree. 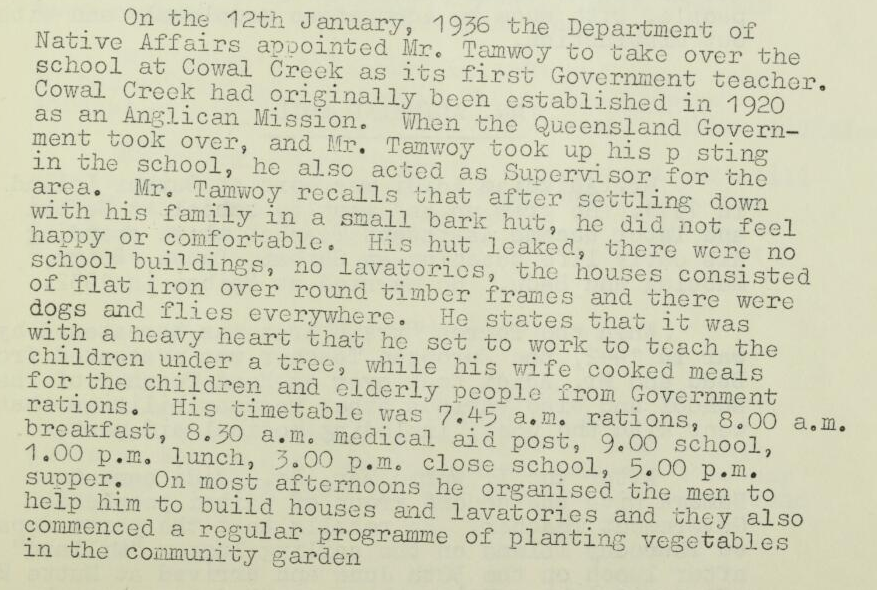 Mr. Adidi was born and raised on Saibai Island in the Torres Strait. After attending school, he became a Teaching Assistant travelling around the Top Western Islands of Dauan, Boigu, his native Saibai, and Near Western Islands of Mabiuag and Badu teaching the local village children. Shortly upon arriving on mainland Australia, he opened the Muttee Head School in July 1946 using a converted army hut. Mr. Adidi dedicated over 40 years of his life serving the communities of the Northern Peninsula Area. Because of his importance, he is prominently featured in the early editions of the school magazine. 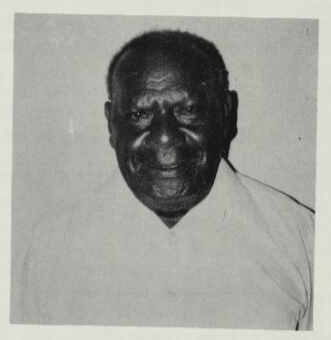 'Coming of the Light' Festival in the Torres Strait

The 1st of July each year marks a very significant day for Torres Strait Islanders. We call it, ‘The Coming of the Light’. It is the day that Reverend Samuel MacFarlane from the London Missionary Society introduced Christianity to the island communities in the Torres Strait. Beginning at Erub (Darnley Island) on the eastern fringe, Reverend MacFarlane and his companions would travel to all the neighbouring island communities sharing the Gospel of our Lord Jesus Christ. The introduction of Christianity, ended inter-island conflicts and wars thus leaving behind peace and harmony.

Read the full story in the 1974 Bamaga High School magazine

Oral histories: The Native Companion and the Emu

Every Friday afternoon from 1:30 – 3:00pm, my classmates and I would gather around our visiting elder Athe (pronounced Ahh-theh, grandfather) Gordon Pablo for cultural class (you can see him here holding our traditional Island drums or Warup (Wah-roop) wearing his signature R.M.Williams hat). As an elder, he is responsible for passing on knowledge to the next generation of children; this knowledge is usually passed on through songs, dancing, learning language names and storytelling. One such story that brings me joy from my childhood is the story about two sisters, the Emu and the Brolga or the Native Companion (Brolga) and the Emu.

Read the full story in the 1974 Bamaga High School magazine

Currently, the National Library holds seven Bamaga State High School magazines and one student-produced handbook North of the Jardine: a look at the five communities of the N.P.A (Northern Peninsula Area) in its collection. 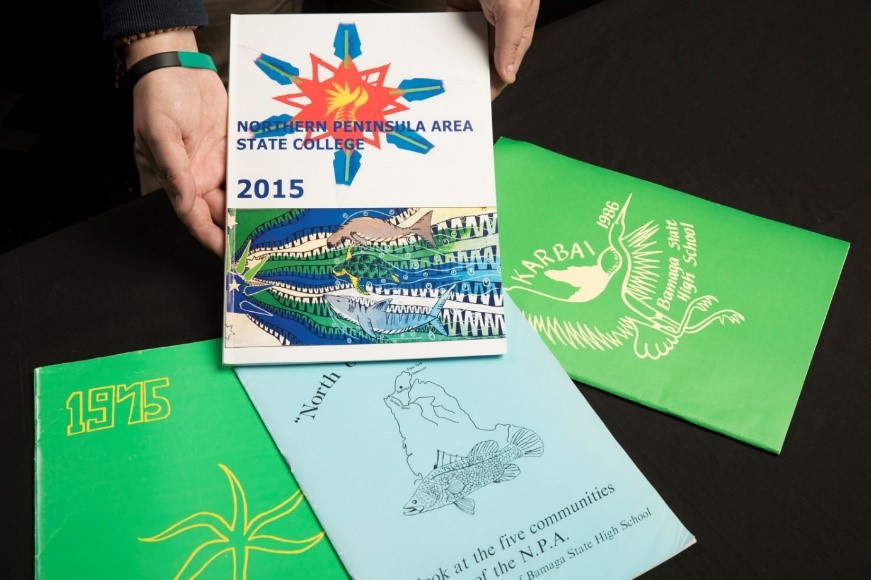 Since all eight issues are still in copyright, the National Library of Australia collaborated with the Northern Peninsula Area State College to have all eight issues digitised and made accessible online via Trove. History was made as the Bamaga State High School magazines became the first school year books to be featured on Trove. As a result of this joint effort, the College has loaned thirteen additional school yearbooks to be digitised.

The role of digitisation is important in connecting community to collections. It has enabled remote communities of Far North Cape York to access their collections online via Trove without travelling 4000kms.