The first of the first 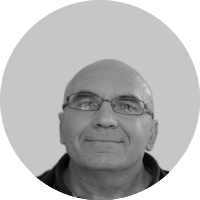 With research for Keepsakes under way, our James and Bettison Treasures Curator Nat Williams brought a large drawing he discovered in the National Library of Australia's Pictures Collection to the attention of the exhibition team.

The drawing, by a certain Samuel Garnet Wells (1885-1964), depicts the German steamship SS Pfalz being fired upon from Fort Nepean, at the mouth of Port Phillip Bay, on 4 August 1914. Nat believed the drawing depicted the first shot fired in the Great War and that the drawing might therefore be the first example of Australian war art. 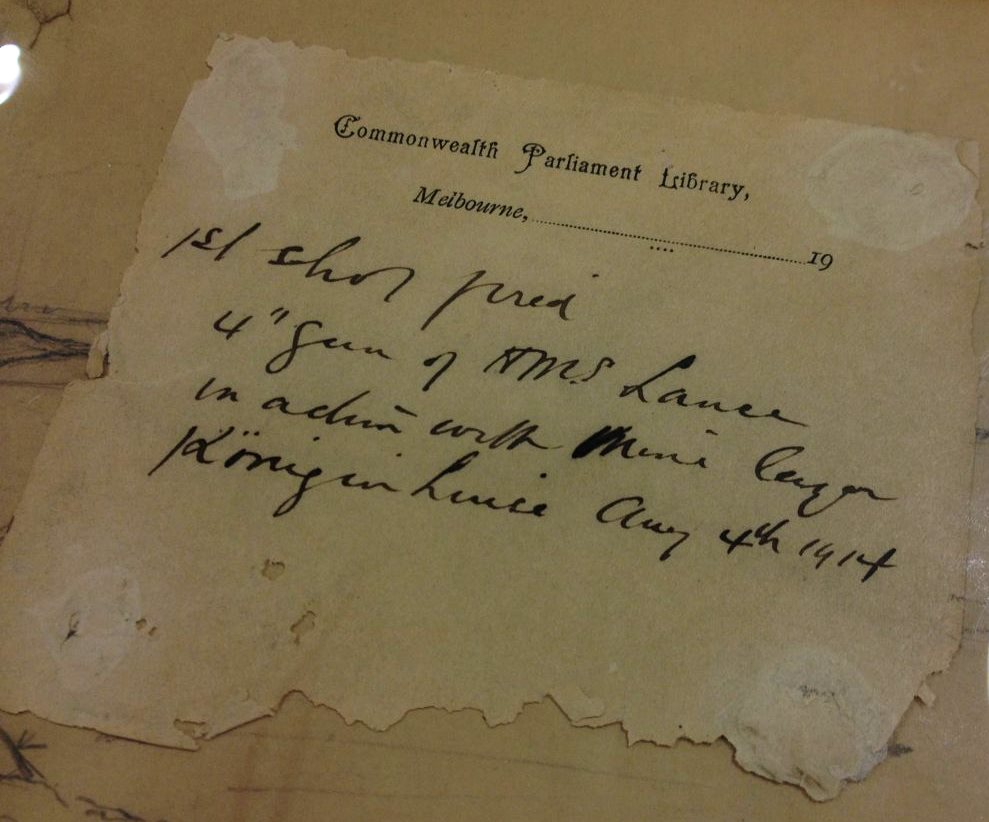 It is hardly surprising that the idea of the First World War should gather to itself other examples of the topos of 'the first'.  There are, however, special connections in the Australian consciousness between the war and this topos. These connections emerged during the war itself as a result of a general perception that the Great War was the first conflict in which Australia had fought as a nation. And Gallipoli became the principal site for these connections.

The topos of 'the first' featured in the earliest reportage of Gallipoli. The widely read British journalist Ellis Ashmead-Bartlett (1881-1931) wrote that the Anzac soldiers on Gallipoli 'were happy because they knew they had been tried for the first time, and had not been found wanting'. Australian journalist and historian Charles Bean (1879-1968) went further, augmenting the topos with metaphors of birth, origins, and discovery. Bean maintained that 'the big thing in the war ... was the discovery of the character of Australian men. It was character which rushed the hills at Gallipoli and held on there'. In fact, Bean believed that the Australian national consciousness itself was 'born' on Anzac Day 1915.

The topos of 'the first' and a valorisation of Gallipoli therefore became particular foci for Australians reflecting on our past. Peter Weir's influential Gallipoli (1981) was the apotheosis of this process. Thanks largely to this film, many consider Gallipoli to be the first and (therefore) the most important action of the First World War. We know, however, that this is not the case. The Western Front campaigns were bigger than Gallipoli and more significant. Gallipoli, moreover, was not the first Australian battle or campaign of the war. In 1914, an Australian force captured German colonial possessions around Rabaul in New Guinea. Before Gallipoli, some Anzac soldiers were engaged against the Turks near the Suez Canal. 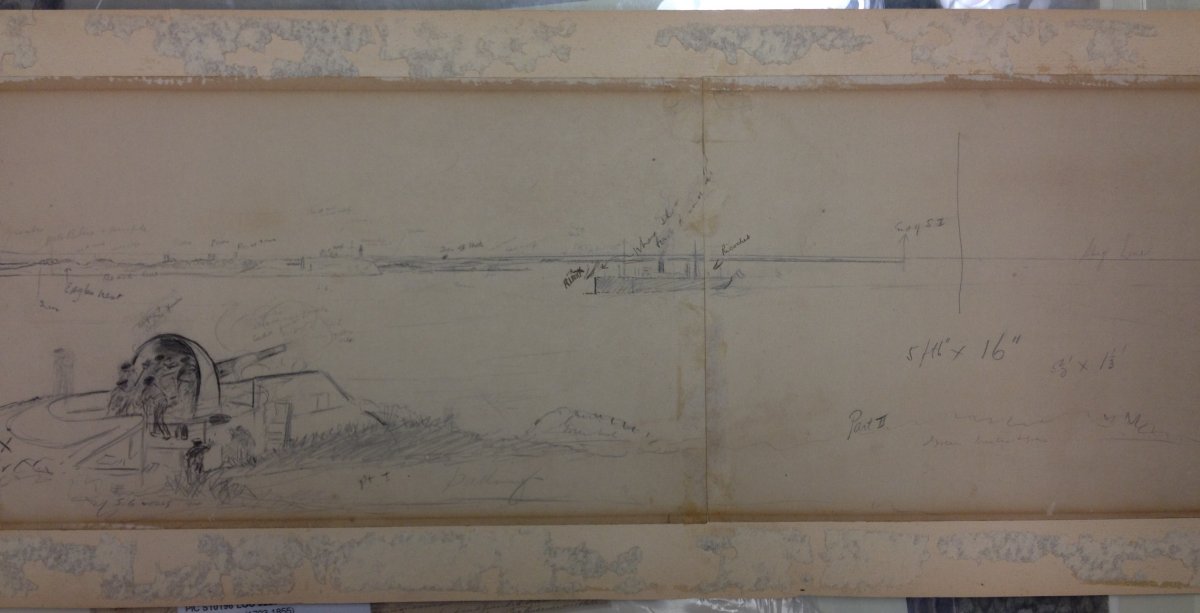 But the shot fired from Fort Nepean came before all these. When German consular staff in Melbourne heard about the British declaration of War, they made their way to the Pfalz and the captain got the ship under way. Heading for open sea, the Pfalz reached the mouth of Port Phillip Bay. Fort Nepean had, however, been alerted. The Pfalz ignored the garrison's signals to turn around so a shot was fired across her bow. She then turned back and her crew was detained at Portsea.

Samuel Wells witnessed the event from Fort Nepean. Wells worked as a draftsman in the fort's office from 1909. When the office's drafting section was closed down, he stayed on at the fort, becoming a Bombardier in the Royal Australian Garrison Artillery. It was at Fort Nepean that Wells first became involved with art, having discovered that his extemporaneous drawings of the fort's surroundings and its personnel were popular. Gaining confidence in his drawing ability, Wells began sending pieces to newspapers. After the war he found work as a newspaper cartoonist in Melbourne. 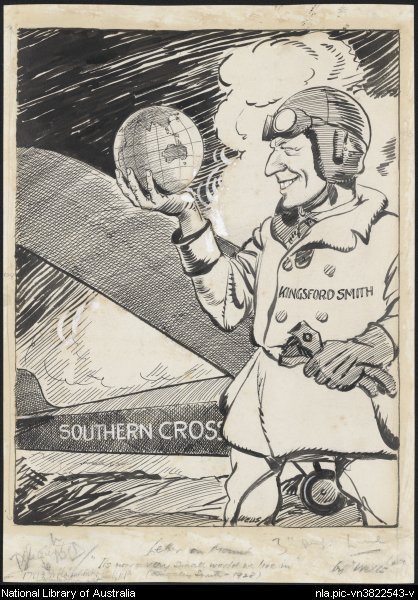 In the 1920s, he produced many popular sporting and political cartoons, some of which featured the character John Citizen, which he himself invented. One of Wells's sporting cartoons featuring a lucky black cat is also thought to be the origin of the Geelong Football Club's nickname 'the Cats'. 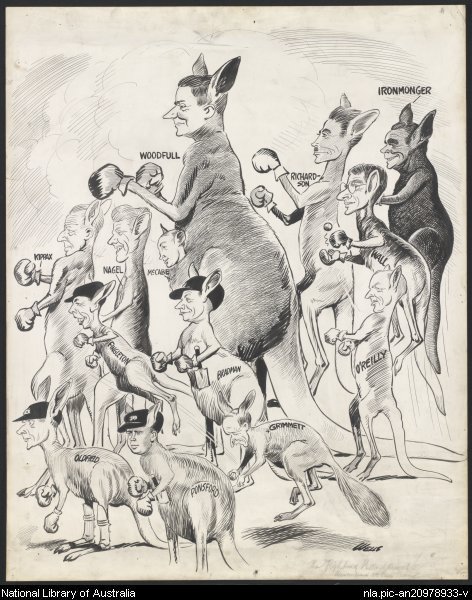 It is tempting to suggest that Wells's drawing of the shot fired at the Pfalz might be his first attempt at 'serious' art as it is clearly a sketch for a painting. It is also possible that he completed the painting. Some tantalising shreds of evidence even suggest that a completed water-colour painting of the incident was acquired by the Commonwealth, and that it exists somewhere, as yet uncatalogued, in the Library's collections. Who will be the first to discover it?

Many people, from Samuel Wells to present-day staff at the Library, have felt the attraction of the topos of 'the first'. Even Fort Nepean was affected. For as though succumbing to the power of Mimesis, the fort also fired the first shot of the Second World War. The 'enemy' on that occasion, however, was an Australian freighter that had forgotten to identify herself.