The proof of the pudding 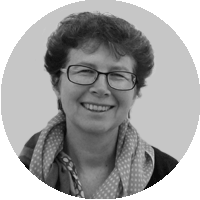 Last weekend my mother asked me what food I was bringing for Christmas. Normally I would make my grandmother’s Copha Christmas Pudding, complete with sixpences for good luck, and probably dating from the 1930s.  This year however we will be eating the Lion's Club Christmas Pudding.

It made me start thinking about the food we eat for Christmas in Australia and how this may have changed over the years.  As a lover of Christmas pudding I was particularly interested in finding references to that Christmas staple in our collections. My quick search did not disappoint.

The first Christmas in the colony was a miserable one by all accounts. In his Journal, Philip Gidley King, at the time a Second Lieutenant charged with establishing a settlement on Norfolk Island, noted on Christmas Day 1788:

Moderate Gales & dark Cloudy Weather at Sunrise hoisted the Colours in observance of Christmas day. & gave the Convicts double allowance of Pork & half a pint of Rum. at 11A.M. Performed Divine Service.

Twenty years later, in 1809, an early newspaper advertisement stated that:

I am not sure whether this would have extended to the Convict population ?

By 1823 things were looking up in the colonies,  and local merchants advertised ingredients for puddings to accompany Christmas 'gambols':

Early newspapers were full of wistful articles comparing Christmas in the new land to that back home in England, and pudding was referred to as a way of maintaining those distant ties.

In 1819 the arrival of ships filled with the essential ingredients for pudding making was the cause for both celebration and nostalgia: 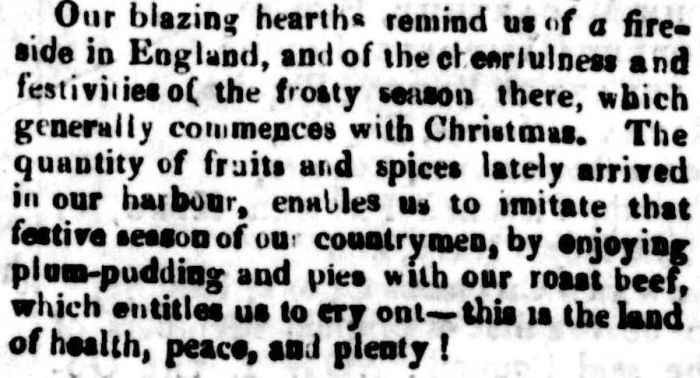 Christmas picnics were popular in early Australia, with games and refreshments served under blue skies and blazing sun, a contrast to the snowy landscape many were familiar with. This was  heightened by the many illustrations such as this one titled Christmas in Australia.  It shows men, women and children reclining in the shade of native trees, partaking of picnic food and drink and playing merry games. Although they are on Manly Beach, in keeping with tradition the family in the bottom right of this etching are partaking of their Christmas pudding, complete with holly on top. 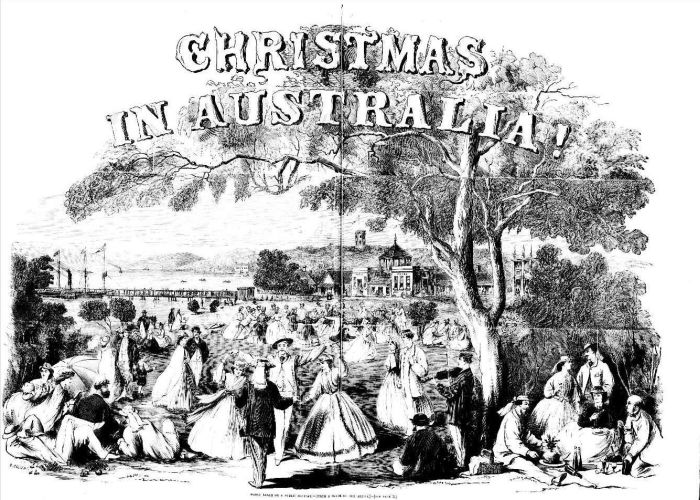 Here is a beautiful description of the Christmas pudding, served in pride of place at the festive table.  Instructions for cooking the pudding could well have been found in the first recognised Australian cookery book called imaginatively The English and Australian cookery book.  The first recipe in Chapter XV  Puddings and Pies  has the method for cooking the 'national Christmas pudding', which appropriately takes pride of place at the top of the illustrations page: 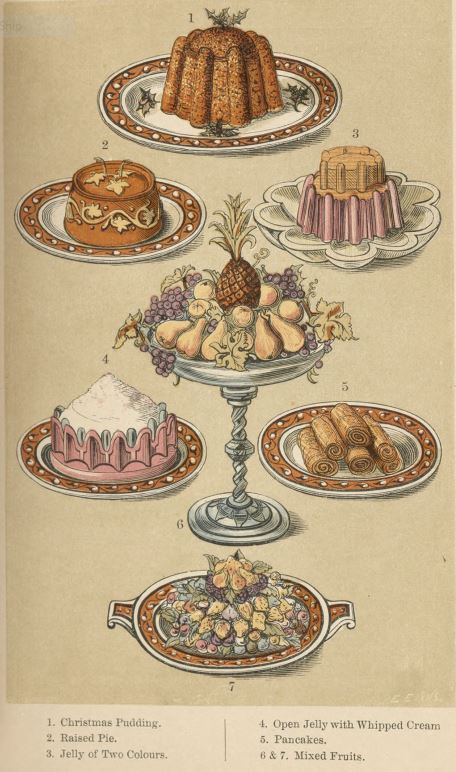 Edward Abbott, The English and Australian cookery book : cookery for the many, as well as for the upper ten thousand.  London : Sampson Low, Son, and Marston, 1864, nla.cat-vn1322518

From a later time, I found this image of a group of travellers eating plum pudding up on the Bogong High Plains on Christmas Day, 1929.  The caption ‘living in a world apart’ perfectly describes the disconnect between the traditional English Christmas food they are eating and the remoteness of the landscape they are in. 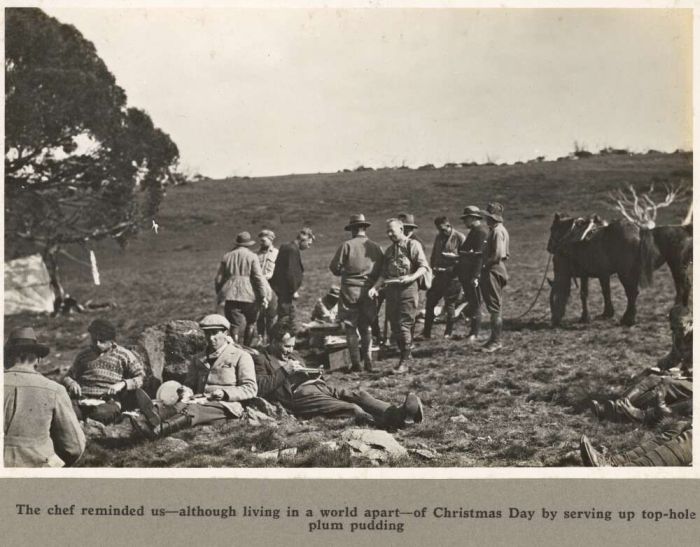 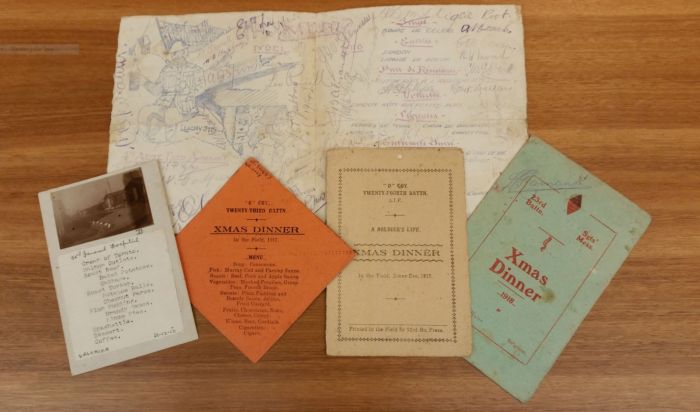 On the homefront however the war time economy ruled, even Christmas being marked by food rationing and ‘making do’.  I am not sure that I would have enjoyed the ‘Economy Christmas Pudding’ of 1941. 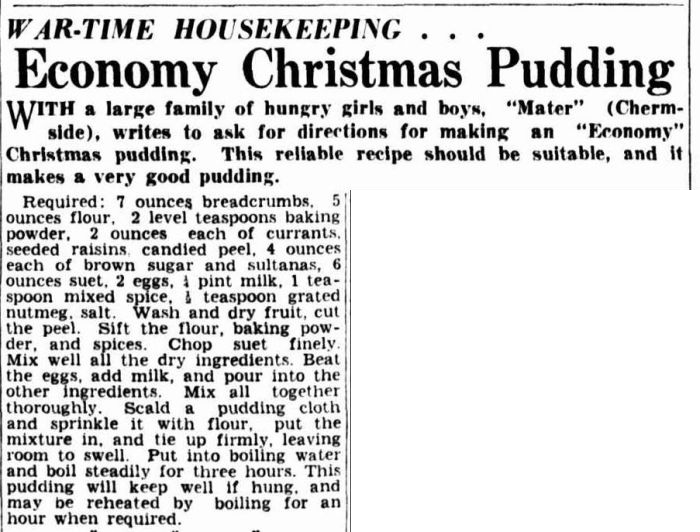 From its first year of publication The Australian Womens Weekly has been making recommendations to Christmas hostesses.  Over the years it has included many recipes for Christmas pudding, but unfortunately not in its first Christmas issue which appeared on 23rd December 1933.  This issue had a range of festive food suggestions, as well as handy hints for using up leftovers and catering for surprise guests under the heading:

There was also a suggested menu which included Christmas Cake but no pudding: 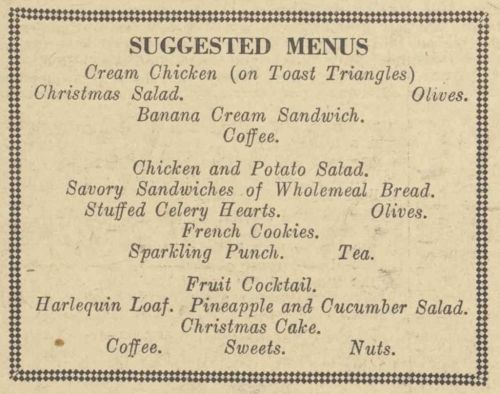 I had more success finding Christmas pudding recipes in later issues.  Ever the innovator, The Weekly has always been full of suggestions as to how to adapt our eating habits to the Australian climate.  In 1963 I found a recipe for ‘Frozen Christmas Pudding’, a way of beating the heat during an Australian Christmas.  It accompanied an article which quoted Henry Lawson on what he considered a 'sensible Australian Christmas'. 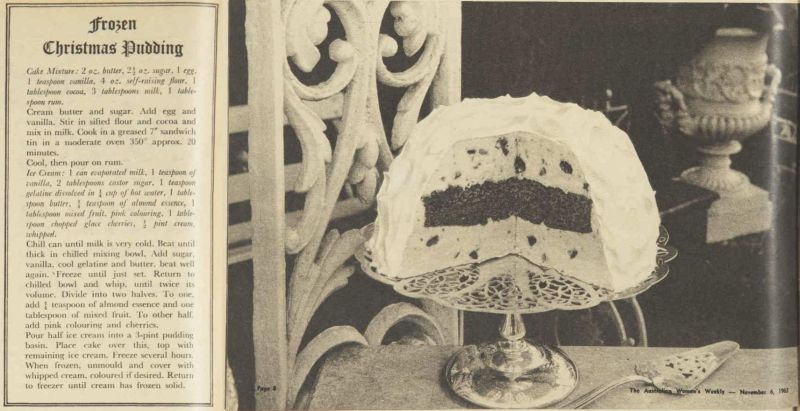 For more up to date Christmas hints from The Weekly I need go no further than the National Library Bookshop to find the latest compilation.  For pudding lovers it contains no less than 15 recipes, including traditional, gluten free, and frozen. 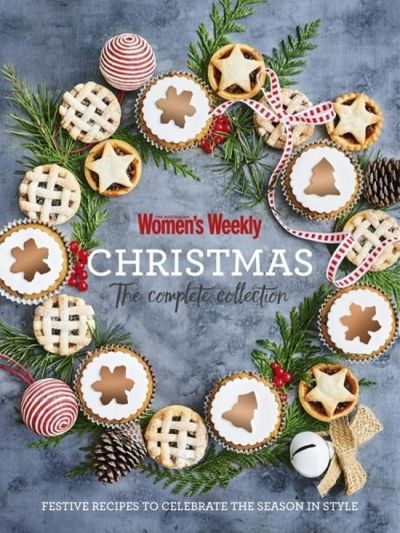 My own Christmas table

So what will my family be eating at our Christmas lunch this year ?  In homage to Christmas tradition there will be a turkey and ham.  Following the advice of the Weekly, and having grown up where Christmas day regularly reached over 40 degrees, the food will be served cold, not hot, and accompanied by a range of salads.  You can be assured there will be pudding and icecream for dessert.

Whatever food is on your shared table, Happy Christmas to you all …

Comment:
What a lovely 'potted' history of the Christmas Pudding. I make one every year using the 1977 recipe from the Australian Women's Weekly - boiled in a cloth. Thank you.
Comment:
Pretty part of content. I just stumbled upon your blog and in accession capital to say that I get in fact loved account your blog posts. Anyway I’ll be subscribing to your augment or even I fulfillment you get admission to persistently quickly. <a href="http://hotel-frankfurt-oder.de/"> Hotel in frankfurt-Oder </a>