The 25 most viewed newspaper articles of 2013

We’ve analysed the stats and the numbers are in. Here are the top 25 most viewed newspaper articles in 2013. We have eye-witness reports of World War I and Nazi Germany, notices about missing girls, natural disasters and the travel of notable Australians. It’s a wonderfully varied assortment, which speaks to the diverse interests of Trove users. Check them out!

1. Typhoon and tidal wave in the Phillipines

The most viewed (by a long way), with 22 490 views, was an article from 1898 about a typhoon and tidal wave in the Philippines. It’s possible people arrived at this article by accident while searching for news about the more recent disaster. Once they arrived on this page, however, they spent two to three minutes here, so they evidently were intrigued enough to read the article.

Number two in our list with 7392 views is an article by Viscount Rothermere. With the virtue of hindsight it is chilling to read: 'The world’s greatest need today is realism. Hitler is a realist. He has saved his country from the ineffectual leadership of hesitating, half-hearted politicians. He has infused into its national life the unconquerable spirit of triumphant youth'.

At number three we have an article about the death of the notorious Leslie 'Squizzy' Taylor. This article was viewed 6549 times. Squizzy died from gunshot wounds. Initially it was believed to have been a duel, but later information suggested he was targeted. And where did one of the guns disappear to? 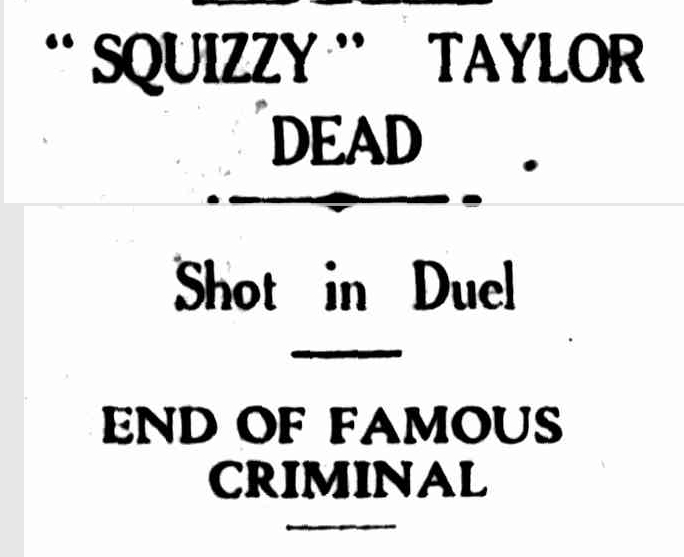 Viewed 4630 times, we have a report of World War I from 8 May 1915, published in the Sydney Morning Herald. Written by the war correspondent Ashmead Bartlett, he is observing the landing of troops at the Dardanelles. The company included Australian soldiers about to see their first action in the war. This is one of the earliest accounts of the landing at Gallipoli.

5. Aboriginal house names and their meanings

With 4501 views, our fifth most viewed article is a list of aboriginal names and their meanings. In 1961 the Australian Women's Weekly tried to help householders find suitable Indigenous names for their dwellings.

I would dearly love to know why this small article about a girl missing in Preston in 1926 was viewed 4113 times. And was the young girl found?

In October 1889, after a trip to Queensland, Sir Henry Parkes visited Tenterfield where he was feted and adored. There were 3638 visits to this article.

Another article about Germany in the 1930s was popular in 2013, with 3262 views. In 1938 treason trials were held when a plot to assassinate Hitler was discovered.

Our ninth most visited article at 3185 views is about a 20 year old woman who committed suicide at the altar rather than marry a man she didn’t love.

The bombing of Darwin in 1942 comes in as the eleventh most visited article, with 3075 views.

Often when I read articles published in decades past I’m struck by how very much how we talk or write publicly about our society has changed. None more so than this article, which denounces the 'perverted' men who conduct fake wedding ceremonies between one another. This was the twelfth most read article with 2850 views.

This is the article which doesn’t sleep, with its circulation in the internet world regularly increasing traffic to Trove by astounding numbers. 2732 views overall, but most of them in a very short space of time. For those of you who’ve not seen it, it tells the story of a man who was wounded on the Western Front in 1915 and hasn’t slept since. We will write more about this article later in the year, as it’s a great example of the viral quality of information on the internet.

We’ve written in the Trove forum about the dedicated group of knitters and crocheters who use Trove, and this pattern for a knitted elephant features in their Trove group. 2283 people have looked at this article. Hopefully some of them made the elephant. If you have made the elephant we’d love to see a picture!

14. Autobiography of a parrot 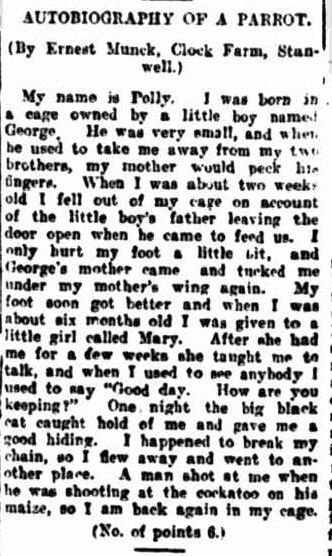 Number 16 is a report of the use of cordite as a chewing gum by soldiers in European armies in the early 20th century. Apparently cordite 'when chewed in small quantities…has a stimulating and exhilarating effect, like small doses of alcohol'. Of course, your head might blow off if you chew too vigorously. 2070 people now know this too. Please don't try this at home!

Our notorious murdered criminal Squizzy did not much want to pay alimony and maintenance to his wife and child.

At the turn of the 20th century the West Australian reported on the publication of a ‘Manual for Directors of Prisons’ in Germany. The author of the article is outraged that women, as well as men, were subject to corporal punishment. The publication is quoted 'The skin must be broken at the fifth blow, and the succeeding blows should widen the break in such a manner as to leave the entire back raw by the time the last blow has been applied'. According to Prussian records, 200 women were subject to this punishment in 1899. 1974 views.

19. How “Squizzy” Taylor After years of crime, the Fitzroy gangster, dictator of the underworld, met the fate he had so often planned for others.

For anyone eager to know how the gangster so popular last year finished up, this is the article for you. 1701 views.

20. Reunion of Christendom. The Roman Catholic view of the matter

This item comes up in the list thanks to the number of people searching for the name Macaulay. Lord Macaulay is quoted in the article, commenting on the state of the Church of England. 1641 people viewed this article.

Here’s a crochet pattern from the Australian Women’s Weekly published in 1974. It brings back memories of 1970s crocheted fashions some senior National Library staff would prefer to forget! I’m not at all sure about the hat, but the lacy top is quite nice. I do hope one of the 1564 people who had a look at it made it. 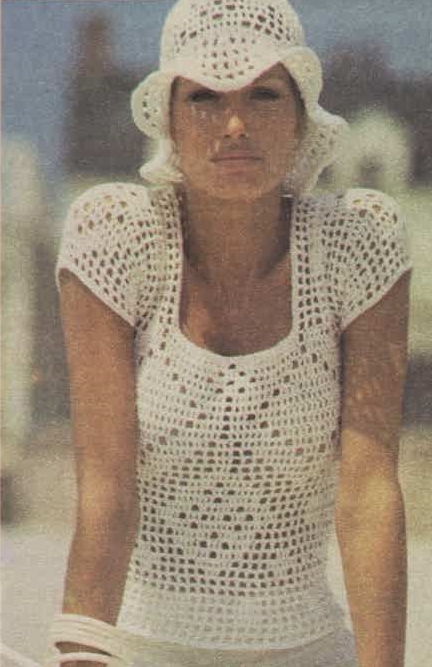 The Philipines suffered another typhoon in 1912. This one was devastating, with half the 12000 strong population reported killed. 1552 views.

And with 1526 views our next article in the list is about a party. The writer is terribly shocked by the 'dozen couples in the street…struggling about in various stages of intoxication'. The party led to a police chase, arrests and 'the sorrowful revellers…forced rather to walk or seek other means of transport to their homes'.

1516 people read this article about the horrors of World War II. This story is a sickening recitation of some of the horrors newly discovered at the liberated concentration camps.

In 1858 water entitlements were a hot issue amongst farmers. Upriver dams were vandalised so the farmers downstream could get access to water. The article is arguing for a more sensible approach. 1502 people read this article.

I hope you’ve enjoyed this tour through last year’s top 25. I feel I’ve learnt just a little bit about Australia and what we’ve been interested in over the year.

Comment:
What a terrific "annual report" for Trove. The Squizzy Taylor interest I guess would follow the popularity of the Underbelly TV series. The anniversary of the bombing of Darwin would also perhaps account for that one. I also wonder if there are training sessions or similair out there which are using these articles as examples, hence the multiple views?
Comment:
Have you examined if their is a correlation between the popularity of these articles and their occurrence in various twitter feeds (eg @TroveNewsBot) ?
Comment:
We haven't, but I think that is a good thought. I may suggest it to a colleague who'll be blogging about such things later in the year.
Comment:
The second article is so popular because it clearly shows the ideology of the owner of The Daily Mail (UK), of which so much is still evident today in the newspaper.
Comment:
Great Reading, I read articles from trove Digitalised newspaper collection on my Community radio show "memories" broadcast over River F.M Lismore N.S.W. between 10 A.m and midday , i wonder would anyone from the N.L.A. like to come on air and do a phone interview about this list on Sunday morning ??
Comment:
As a knitter, I love the Trove serendipity of knitting patterns, the Ravelry Trove group is also very active in correcting some of the scanning typos in the patterns.
Comment:
I suspect the very high number of visitors to the top ranked article, "Typhoon and tidal wave in the Phillipines", is largely to do with it being referenced in the the blog below: http://stevengoddard.wordpress.com/2013/11/17/reader-says-i-went-back-in-time-to-1897-and-wrote-a-fake-article-for-the-new-york-times/
Comment:
What a great post! Loved it. Keep up the awesome work.
Comment:
My brother (born 1960) had one of those elephants. Stood about 8 inches high and it was grey!
Comment:
How lovely! So nice to know it has been made.
Comment:
iam inspired by this article