The teams behind Trove - part 1

The teams behind Trove - part 1
There are many people whose work it is to build and maintain Trove. Here’s what we do.

Trove exists thanks to the work of many people at the National Library of Australia. In our next two blog posts we'll tell you a little bit about that work, how it is organised, who does it, and why we enjoy it.

For some staff, Trove is a full-time job. For others, Trove is just one of multiple projects and responsibilities that are part of their work here at the Library. So although many staff from many parts of the Library are involved in Trove in some way, all the ‘bits’ of staff time add up to the equivalent of between 15 and 20 people’s full-time work, depending on where we are in Trove’s development cycle.

There are four major groups of people who contribute to Trove: the Library’s senior managers who have responsibility for Trove’s strategic direction and resourcing, and sections which build, maintain and contribute data to Trove. These are the Trove Support Team, the Australian Newspapers Digitisation Program and Australian Newspapers Plan, and the Collection Access Branch. There would be no Trove without them.

In part one I’ll introduce you to our management and the Trove Support Team. In part two you’ll meet the teams behind the newspapers and the technology.

The Library’s Council, Director-General Anne-Marie Schwirtlich, and all members of the Library’s senior management team are actively involved in Trove’s strategic directions and development.  Marie-Louise Ayres, as the Assistant Director-General, Resource Sharing is the ‘business owner’ of Trove. Amelia McKenzie is the Assistant Director-General of the Collections Management Division. Collections Management is the home of Trove’s digitised newspapers and other library collections which are in Trove. Mark Corbould is in charge of the Library’s information technology systems. Trove’s nuts and bolts are developed, built and maintained by the Collections Access Branch  in his division. 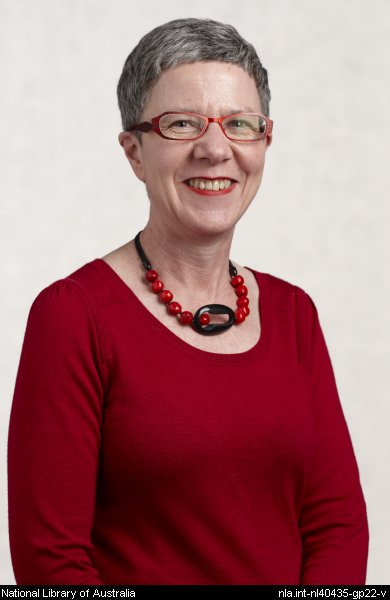 ‘I’m the member of the Library’s senior management team responsible for Trove strategy, directions, and business operations. I work closely with other senior colleagues to ensure we balance the “long view”—our ambitions, aspirations, innovations—with the shorter view that is all about dollars, cents, staff hours, and how we can make the best out of scarce resources. It’s my job to keep Trove healthy, growing, and to advocate its value to potential contributors and user groups.

I’ve been in the Trove space before Trove even existed. I managed earlier NLA discovery services, was heavily involved in the Library’s initial thinking about a single, format-agnostic discovery service (right back in 2007-2008), and was a member of the Trove Project Board right through its development. I find Trove’s success and the place it has won in Australian hearts and minds immensely satisfying, and I am constantly inspired by the wonderful stories we hear from Trove users.  I love working with the multiple and multiply wonderful Trove teams to deliver the best service possible to as many Australians as possible.  We may not be able to easily measure the ways in which Trove has changed lives—but I know that it has, and that moves me in ways I cannot even describe.’ 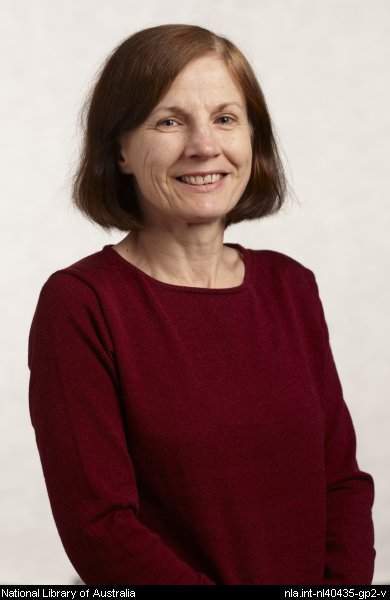 ‘I’m head of the Collections Management Division where we digitise the newspapers that now make up 80% of the traffic to Trove. The newspaper digitisation program began in 2007 and has now digitised and delivered to Trove a staggering 14.5 million pages, the largest digitised newspaper collection in the world. Our in-house staff team of 5 are at the pointy end of a substantial cooperative program through which Australia’s state and territory libraries and many small organisations, societies, local libraries, councils and individuals have contributed funding and support to make Trove newspapers what it is.

It is enormously rewarding to see how successful Trove newspapers have become after some tough budget decisions and a lot of hard work in the early years. Australian libraries have shown the world yet again how well they work together to do something that benefits everyone. On the personal level, I love that libraries and collecting institutions have unlocked the historical and social riches hidden in our newspaper vaults and our microfilm drawers. Now we have to ask ourselves: what’s going to be the next big thing, and how are we going to do it?’ 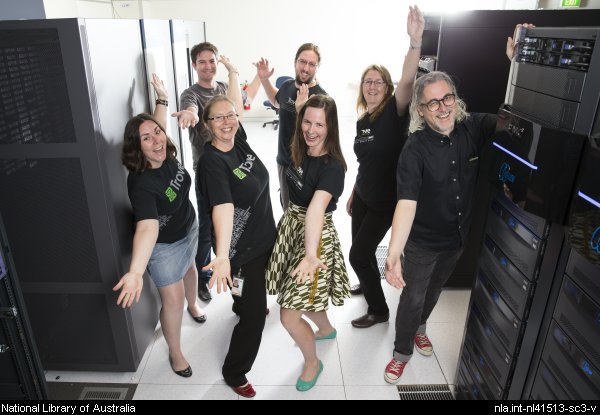 The Trove Support Team is the team you’re most likely to have contact with. We are part of the Collaborative Services branch in the Resource Sharing Division. We’re the ones behind the tweets, blog posts, the Forum and the contact us form. We talk to organisations with tasty data to try to get it into Trove. We think about, plan for, and occasionally worry about, how to help you get the most out of Trove. We test enhancements before they are released to you (probably not our favourite job) and we transform our Content Partners’ data into formats Trove can display (one of our favourite jobs—yes, we are data nerds). We blog, tweet and talk about Trove whenever we can. There’s also reporting, statistics gathering, filing, and meetings—inevitable parts of life in most organisations.

Deirdre Kiorgaard (Director, Collaborative Services): ‘I’m Director of the Collaborative Services Branch which includes the Trove Support Team. Trove is the culmination of many years of thinking, planning and experimentation by the National Library, and I’m proud to be part of that history. Through Trove the wonderful resources held by Australian collecting institutions are much easier to discover, access and use. As well as making more resources available, Trove has also opened up new audiences and new uses for that content. For me, developing such a heavily used and well-loved service is really a dream job.'

Julia (Trove Support): ‘I love helping organisations make their fantastic collections more discoverable, and hearing from the users that come across such interesting personal pieces in those collections. I’m also a bit of a data junkie, so there is an ecstatic glee when I finally see a new batch of photographs or biographies I’ve been working on become discoverable in Trove.’

Kristen (Trove Support): ‘The work supporting Trove is varied and challenging.  It is great to be part of such a fantastic resource and to be regularly amazed by the great stuff that's held by Australia’s collecting institutions’.

Mark (Trove Support): ‘What I enjoy most about my work on Trove is the challenges that come up as we investigate new ways of doing things, whether these are changes to the user experience, or bringing in new contributors.’

Jess (Trove Support): ‘It’s great to be able to help people find what they’re looking for and to bring new and interesting content to our Trove users. Knowing that we’ve made them happy makes me happy.’

Tim (Trove Manager): ‘Trove is a big bucket of possibilities—brimming full of memories, connections, ideas and emotions. I love to be surprised by what Trove users do and create with the possibilities we provide. I'm inspired by their passion and generosity. We're all building Trove together.’

Comment:
Delighted to meet all of you. Your work and support is highly valued, thank you!
Comment:
It's our pleasure!
Comment:
Lovely to see some of the faces behind Trove. I use Trove almost every day while writing the "In the Herald" column for the Sydney Morning Herald. My predecessor used microfilm and his colourful outbursts were legendary. Trove allows me to work quickly and efficiently and to find the good stuff with a minimum of grief. Thank you for all your great work.
Comment:
Thanks so much for the feedback!
Comment:
Congratulations, and sincere thanks for all your work, from the Hunter Region of Eastern Australia. We love what you have done for us so far, and deeply appreciate the work that has gone into making our historic newspapers freely accessible to everyone. Keep up this great work, it is an important National project to ensure that we grow intelligent, creative, humane and (hopefully) wise communities across Australia.
Comment:
I second Gionni's comments wholeheartedly. Trove has allowed me to delve ever deeper into the stories of women from the Hunter who served at nurses in WW1. Thank you Trove staff!
Comment:
I adore Trove! I use it for family history, for uni work and for just browsing and marvelling. Thank you so much for all your efforts, which are greatly appreciated.
Comment:
Trove have been so supportive of loading small special society collections , and in bringing heritage grey literature to a place where everyone can use it , you save many hours of research every day for researchers all over Australia.
Comment:
Thank you all for taking the time to give us your feedback.
Comment:
Thank you sooo much. With help from Trove I have been able to discover the stories of many of my early Australian ancestors. Bringing the past stories into the future. Wonderful and extremely valuable resource for all family historians. :-)
Comment:
Thank you so much for all your hardwork on Trove. It is such a wonderful resource!
Comment:
Thank you so much for all your hardwork on Trove. It is such a wonderful resource!
Comment:
Thank you so much for all your hardwork on Trove. It is such a wonderful resource!
Comment:
yes...thank you...I have dipped into trove at times and am determined to check out more sources at a later time... It is addictive once you start tho...!
Comment:
Thank you for the amazing thing you have done for us! Trove is a wonderful resource.
Comment:
I love Trove, it has brought to life mine and my husband's family. We have discovered events we were completely unaware of, some a little bit shocking; some heartbreaking. Thank you.
Comment:
I have been spreading the Trove message far and wide and I cannot wait until you catch up to the 60's so that I can relive some of those special events of my youth. Keep up the good work.
Comment:
I cannot thank you enough for the work that you do with this amazing resource. There has been hardly a day in the last four years where I have not visited TROVE for some piece of information. Often I can lose hours reading the stories and sharing our history with others. THANK YOU! Renata Daniel - Newcastle Ghost Tours
Comment:
Trove has been part of my life since 2009 and I remember waiting as patiently as possible for the Sydney Morning Herald so I could track my disadvantaged girls. Without Trove it would have been impossible to find those who adopted aliases and discover the family backgrounds for the girls of the Newcastle Industrial School (http://nis.wikidot.com/). Thankyou to all of the team. Jane
Comment:
I write books of historical fiction set during World War 1 in South Australia. Trove has become a principal resource for me. I can't sing your praises loud enough. Thank you all!
Comment:
I write books about strange phenomena, and for many years used to trudge to the State Library, look through the bound volumes and fight the microfilm machines. Trove was a revelation, a truly global class resource. I now pay for two other US newspaper archives, but from the start Trove has been the leader. Wonderful! Thanks so much for all your hard work - it really makes a difference.