The Asian Collections Reading Room houses a number of unique images and sculptures relating to Asia, many of which were kindly donated to the Library's collections.

Fujiyama. First Light of the Sun 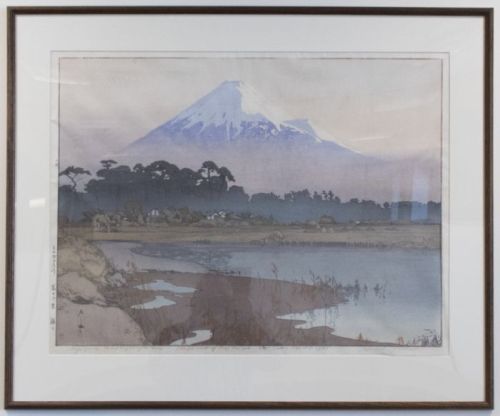 Fujiyama. First light of the sun was acquired by Major George Caiger in 1945.

George Caiger (1903-1991) wrote extensively on the links between Australia and Asia. His personal papers are held in the Library’s manuscripts collection (MS Acc06/75), and this woodblock print was presented to the Library in 2006 by his son, Dr John Caiger. 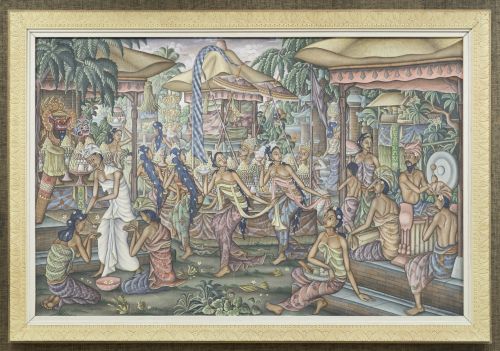 This painting of a Balinese Hindu festival was created by Kentjana, from the famous artistic village of Ubud in Bali.

Held by the National Library on behalf of Parliament, the painting was presented to a parliamentary delegation which visited various Southeast Asian countries in 1962. 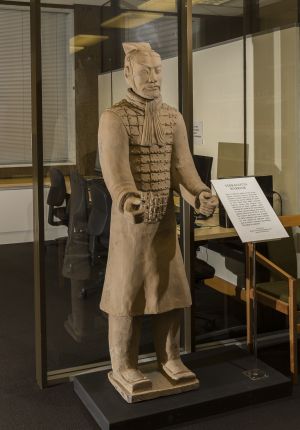 Donated by the Embassy of the People’s Republic of China, Canberra, December 2004.

Within the Asian Collections Reading Room resides a full-size replica of one of the famous terracotta warriors discovered buried in a tomb to the east of the city of Xi’an, the ancient capital of China, in 1974.

More than 8,000 terracotta warriors, horses and weapons were discovered in three separate vaults marking the tomb of the first Emperor of China, Qin Shi Huang, who ruled a unified China from 221 BC to 210BC.

The warriors and horses were arranged in battle formation and were modelled on real soldiers of different ranks, such as archers, horsemen and officers. This figure is a general. 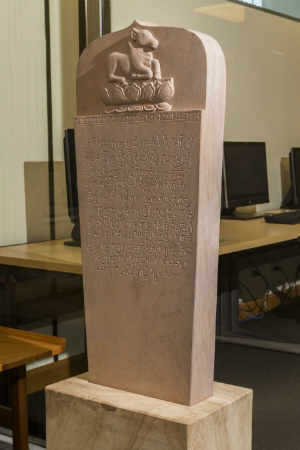 This Khmer Stele is a modern replica of one of the earliest known steles of the pre-Angkor period of Cambodian history, with the original made around the 7th century CE.

The stele (an upright pillar of stone bearing an inscription) is carved in ancient Khmer script, which is thought to have developed from the Pallava script of India. It would have been erected by a temple, and most likely stood near the mouth of the Mekong River. It records the sovereign’s requirements for donations and distributions of goods by the common people.

The Khmer economy did not use money, and was organised along hierarchical and religious lines. Merit was accumulated by ordinary people through the donation of goods or labour. Temples earned their own merit by delivering these goods to the king. The stele conveys these instructions and obligations. The last line reads, “Anyone who obstructs these orders will be published.”

The Library’s replica was accurately copied from an original inscription in Siem Reap, Cambodia in May 2010. It was carved on pink sandstone (as the original would have been) by a local craftsman. 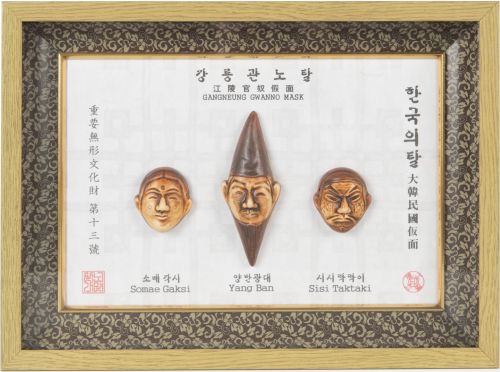 The Gwanno mask dance is performed during “Dano Festival” that is held annually to pray for prosperity and welfare. It is believed that these masks provide protection from bad luck and the dance is performed to send away evil spirits. 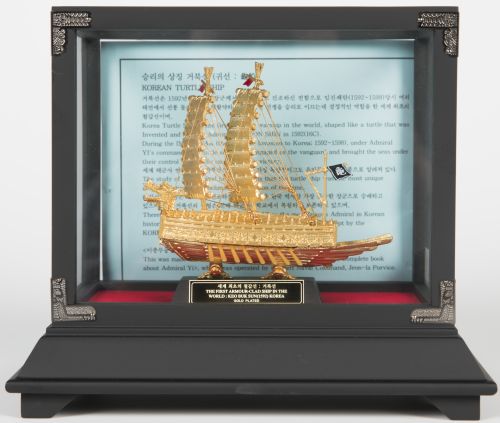 The Korean Turtle Ship was the world's first armoured warship. Shaped like a turtle, it was invented and built by Admiral Yi Soon-Shin in 1592 (16 C). During the Im Jin War with Japan (1592-1598), the turtle ships led the fleet under Admiral Yi’s command, to bring the seas under their control, leading the country to victory.

Historically, the turtle ship was a significant naval invention of its time, and its creator, Admiral Yi, has become one of Korea's most admired military leaders. A full-sized replica of the original turtle ship has been rebuilt and is on display at the Korean Naval Academy in Jin Hae city. 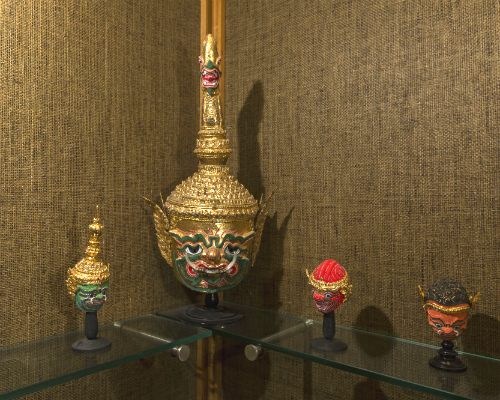 Khon (Thai: โขน) is a genre of dance drama from Thailand. It is traditionally performed solely in the royal court, by men in masks accompanied by narrators and a traditional pipha ensemble. The masks here are for characters from the Ramayana story. The large green mask is for one of the monkey army who help the hero Rama, the large gold mask is one of the allies of the demon king Ravana who abducted Rama’s wife Sita. 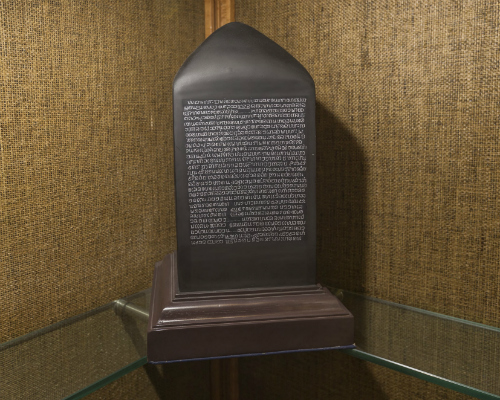 Replica Stone Obelisk with Inscription, The Kingdom of Sukhothai.

The third King of Sukhothai, Phorkhun Ramkhamhaeng, regarded by Thai people as the father of the nation and creator of the Thai alphabet, records the abundant prosperity and religious piety of the people on his inscription from 1292. The original stone obelisk from 13th century Sukhothai is displayed in the National Museum Bangkok, and is 4-sided and 109 cm tall. This obelisk was found at Sukhothai in 1833 by the then prince-monk who was to become King Mongkut (King Rama IV) from 1851-1868. 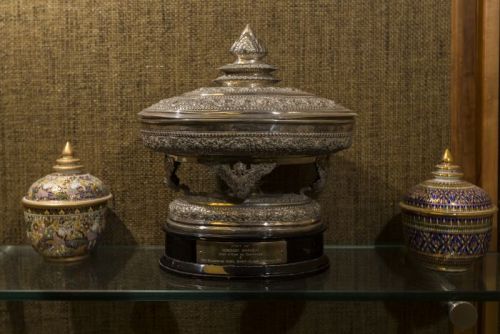 The Benjarong is a traditional form of Thai porcelain. The style of multi-coloured enamels on a white porcelain base came from Ming dynasty China. The name “Benjarong” was derived from Bali and Sanskrit words Benja and Rong, meaning literally “Five Colours”. “Five Colours” really means “many colours because the hand-painted pieces are usually decorated in three, five, eight colours, or even more. In the 13th-18th century, Benjarong porcelain was exclusively made for the royal court. Later its use extended to aristocrats and wealthy merchants; today people of all nationalities use Benjarong for formal ware.

The Cambodian bowl was presented by Norodom Sihanouk, the Head of State of Cambodia, to Noel Deschamps, Australian Ambassador to Cambodia from 1962-1969. 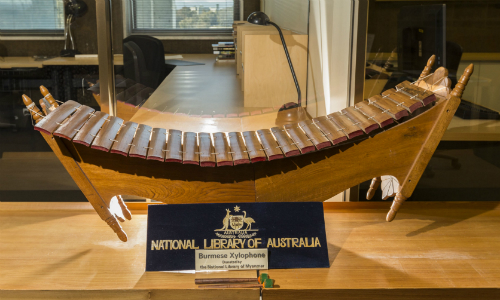 Burmese Xylophone donated by the National Library of Myanmar 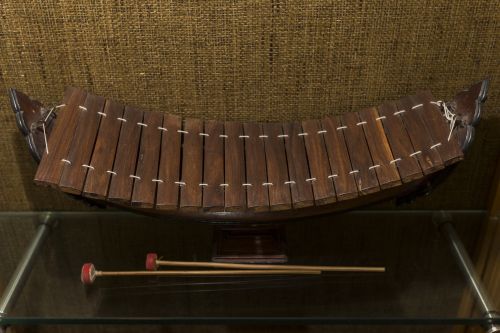 Miniature model of a Burmese Xylophone

The Burmese Xylophone, also known as the Pattalar is usually made up of bamboo or copper for its bars. There are 24 bars in current Pattalar, though the original version only had only seven. Creating this instrument takes careful skill, as special knowledge is needed to choose the size, thickness and age of bamboo. The player uses two mallets to play the Pattalar. 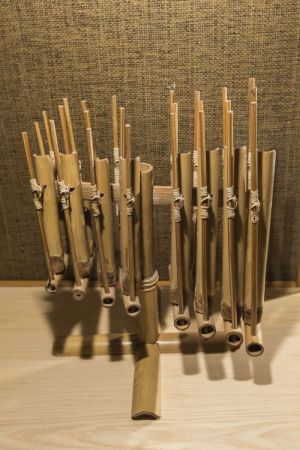 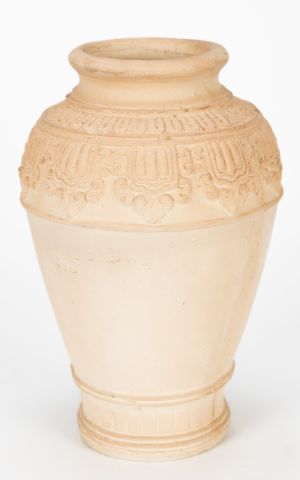 This pot was from the first firing of the restored kiln of the School of Fine Arts, Phnom Penh, Cambodia.
The original kiln was destroyed during the Khmer Rouge period from 1975 to 1979, and rebuilt by the Australian ceramicist Gwyn Hanssen Piggott and an Australian volunteer, Mr Bill Lobban, in an Australian government project in 1992.

The pot was donated by Neil Manton, a former diplomat who specialised in the arts and cultures of Singapore, Malaysia and Indochina. His personal papers are held in the Library's manuscripts collection (MS 9811).