The Battle of Bantam 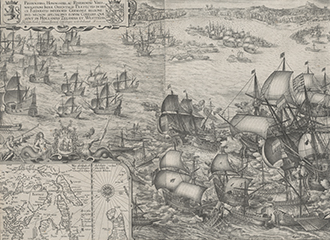 This rare and important Dutch news map reports on a battle fought between the Dutch and Portuguese in December 1601. The Portuguese dominated trade to the Far East in the sixteenth century, and the battle—in which the Dutch overpowered the Portuguese—proved a key turning point. Just above the inset map is the earliest depiction of the coat of arms of the Dutch United East India Company (Vereenigde Oost-Indische Compagnie or VOC). It also features the Duyfken, the first known European ship to visit Australia. 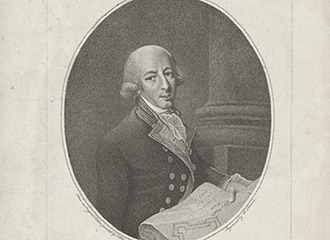 The Voyage of Governor Phillip to Botany Bay is the first official account of European settlement in New South Wales. It covers the voyage of the First Fleet (13 May 1787 – January 1788) and the initial months setting up the penal colony at Port Jackson (Sydney Harbour), including interaction with local Indigenous people. Publisher John Stockwell assembled the ambitious book in London from a variety of accounts, including those of Captain Arthur Phillip, Lieutenants John Shortland, John Watts, Henry Lidgbird Ball, and Captain John Marshall, as well as six mapmakers.

An Australian Bird by Sarah Stone 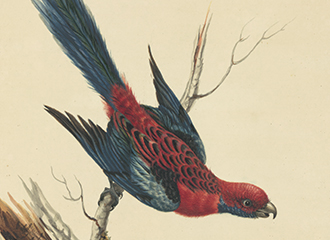 This watercolour of a crimson rosella is among the earliest European images of an Australian bird. The artist was Sarah Stone, aged about 30 when she made this from a specimen sent to England by First Fleet surgeon John White. Engravings based on Sarah Stone’s watercolours illustrated White’s bestselling 1790 account. In his journal, John White writes that these birds were ‘first noticed’ in about June 1788. 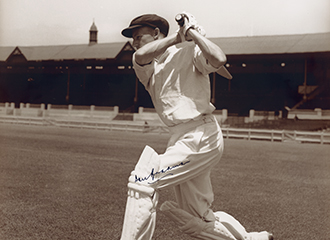 Sir Donald Bradman was the greatest batsman to play test cricket, by some margin. He has been called aloof, conservative and obstinate, not the characteristics of a great folk hero, but his exploits helped Australia see itself as a country of significance, one capable of producing world-beaters, not just a colonial outpost. On display are a signed photograph, a letter where he describes one his greatest innings and rare programs from the notorious Bodyline series. 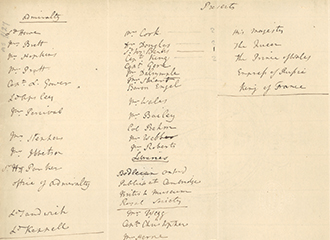 In February 1779, on his third Pacific voyage, Captain James Cook was killed in Hawaii. Managing the publication of the voyage’s official account fell to the naturalist Joseph Banks, who had sailed with Cook when he was a young man. Manuscripts held by the Library show how Banks steered the book towards publication in 1784. A highlight is this list, by Banks, of people who were to receive copies of the book. Famous names include George III, Catherine the Great, Louis XVI and Benjamin Franklin.

Queen of the World? 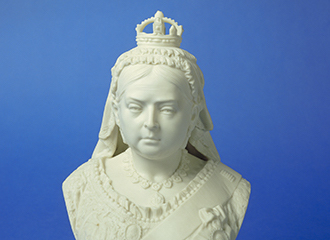 As the nineteenth century drew to a close, Queen Victoria of Great Britain and Ireland, Empress of India, was arguably the most powerful person in the world. Her Golden and Diamond Jubilees, in 1887 and 1897 respectively, provided opportunities for public celebration across her vast empire. Through portraits, such as this bust, Australians got a glimpse of the Queen who never visited their shores.

Two hundred years after her birth in 1819, her legacy remains visible through the numerous places named in her honour, including the states of Queensland and Victoria. 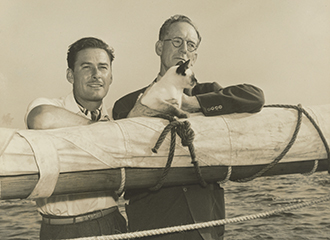 Tasmanian-born actor Errol Flynn was one of the most famous film stars of the 1930s. He made the part of swashbuckling hero his own in highly popular films such as Captain Blood (1935) and The Adventures of Robin Hood (1938). On display is a rare photograph of Flynn and his father Theodore Thomson Flynn, a noted Australian zoologist, as well as a personal letter he wrote to his family after finishing Captain Blood. 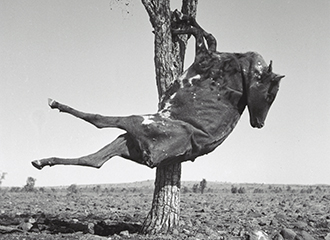 Sidney Nolan is one of Australia’s greatest modernist artists. He is best known for highly expressive paintings that deal with legendary Australian figures such as outlaw Ned Kelly, castaway Eliza Fraser and explorers Robert O’Hara Burke and William Wills. In 1952 the Courier-Mail newspaper commissioned Nolan to document the drought-ravaged pastoral areas of north Queensland. He produced a series of harrowing paintings, sketches and photographs showing contorted and emaciated livestock carcasses. 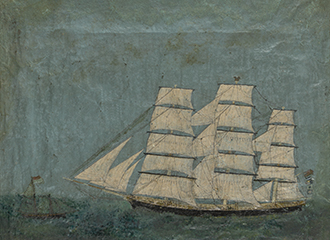 The Cutty Sark was one of the last of the great British clipper ships. Built in 1869 to transport tea back from China, it became the fastest ship transporting wool from Australia to Britain in the 1880s. In the 1890s steamships began to dominate the wool trade, and Cutty Sark did its last wool run from Australia in 1895. It is now preserved as a museum ship and is part of the Royal Museums Greenwich in London. This image of the famous clipper was believed to be painted by one of the crew on a piece of sailcloth from the ship. 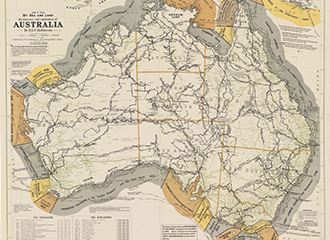 This large, detailed map brings together information about the European exploration of Australia. Published by one of the great Australian twentieth-century map companies, it draws on The Discovery of Australia (1922) by G. Arnold Wood, Professor of History at the University of Sydney. It acknowledges some Indigenous presence, such as in the use of ‘Humpy Bong’, an Indigenous name for abandoned buildings at Redcliffe, Queensland. 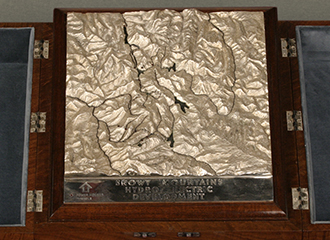 The Snowy Mountains Hydro-Electric Scheme was an important project in Australian economic and cultural development. This enormous system of power stations, dams and tunnels spreads across the high country to harvest the Snowy River for electricity generation and irrigation. More than 100,000 men and women worked on the project, mostly newly arrived migrants from over 30 different countries. This electrically illuminated model of the entire scheme was commissioned for the commencement of works in 1949.

These surveying instruments belonged to Thomas Livingstone Mitchell (1792–1855) who was appointed Surveyor-General for New South Wales in 1828. At the time, the expansion of settlement had been hampered by the Survey Department’s inadequate equipment and by its failure to coordinate small surveys. Mitchell argued for importing better equipment and conducting a general survey of the colony. He also oversaw the creation of the colony’s first road network. Mitchell’s explorations led to the discovery of rich pastoral land, dubbed ‘Australia Felix’ (Latin for ‘Happy Australia’), in central and western Victoria. 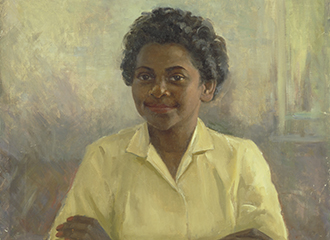 Faith Bandler (1918–2015) was a civil rights activist. In the 1950s, she became involved with Indigenous rights organisations. As the New South Wales state secretary of the Federal Council for the Advancement of Aborigines and Torres Strait Islanders, she led the state’s campaign for constitutional amendment of Sections 51 (xxvi) and 127, which eventuated in the successful 1967 referendum on Indigenous rights. 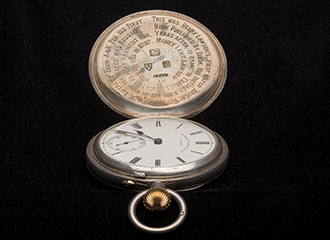 Henry Lawson (1867–1922) was one of Australia’s most influential poets and short story writers of the late nineteenth century. Angus and Robertson published a number of collections of his works, including While the Billy Boils (1896) and In the Days When the World Was Wide and Other Verses (1896). Lawson purchased this watch in 1896 as a memento, using a payment from Angus and Robertson for the publication of his first book. 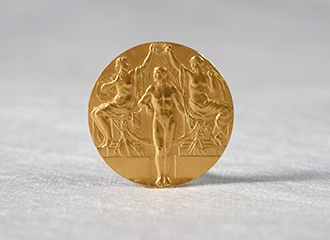 The 1912 Summer Olympics in Stockholm, Sweden was the first Olympics to feature women's swimming. Fanny Durack and her close friend and competitor Mina Wylie were initially refused permission to compete, but were eventually allowed so long as they paid their own way. Durack went on to win the final of the 100-metre freestyle, setting a new world record and becoming the first Australian woman to win an Olympic gold medal for swimming.