On three epic voyages, Cook's Whitby colliers traversed the farthest reaches of the Pacific Ocean, from Asia to the Americas. They crossed the Antarctic Circle in January 1773 in search of the Great South Land, and the Arctic Circle in 1778 in search of the Northwest Passage. The ships visited many places, some in New Zealand and the Society Islands for extended periods, while other encounters were more fleeting, such as the visits to Rapa Nui (Easter Island) and the Marquesas Islands. Yet wherever contact occurred between European and islander, trade and cultural and social exchange took many forms. 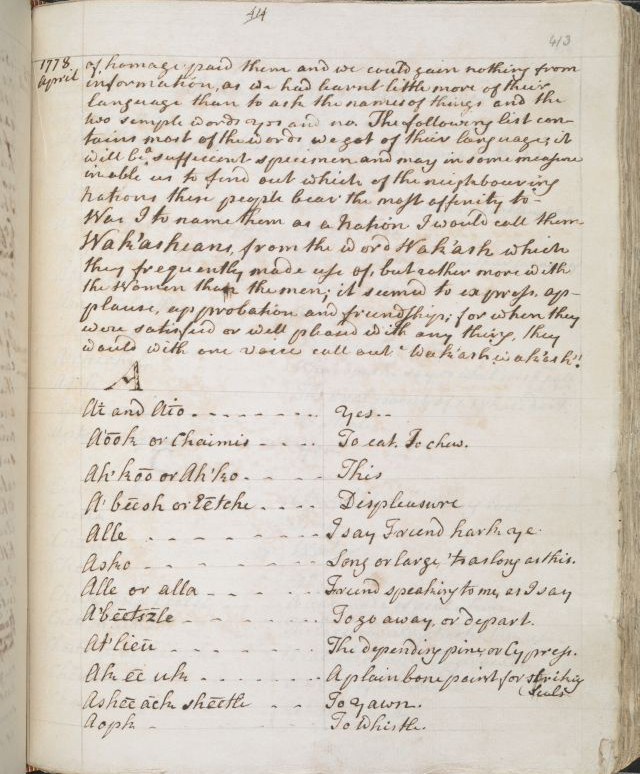 In April 1778 Cook and his men spent time in Nootka Sound (Vancouver Island) while one of his ships underwent repairs. They met the local Mowachat/Muchalaht people, and this long wordlist was probably drafted by surgeon William Anderson. Cook wrote:

‘we had learnt little more of their language than to ask the names of things … … The following list contains most of the words we got of their language … it … may in some measure inable us to find out which of the neigbouring Nations these people bear the most affinity to.’

It is one of a number of wordlists that were recorded on Cook’s three Pacific voyages. These wordlists are invaluable sources for historians and First Nations peoples today. They show people coming together, trying to make themselves understood, and understand each other.