The Library collects Australian printed publications under the legal deposit section of the Copyright Act, as well as selected materials in other formats, including oral histories, manuscripts, pictures and e-publications. The Library also harvests and archives a snapshot of the Australian (.au) internet domain.

The Library completed the tender process for the Digital Library Infrastructure Replacement project, selecting DocWorks as its digitisation workflow system, and Safety Deposit Box as its preservation and digital library core system. The development of associated standards, specifications, workflows and selection policy for the digitisation of books and journals has also been completed, and digitisation will commence, using DocWorks, in 2013–14.

The Library completed the implementation of strategic changes to its overseas collecting program during the year. The number of print journal subscriptions was reduced from approximately 2,000 titles to 750 titles, with the majority of the cancelled titles being out of scope for the Library’s collection or not core journals in their subject areas. In January 2013, the Library began offering overseas ebooks in place of print books. It is estimated that one-third of United States monographs acquired are now in ebook form, providing much-improved access for users.

In 2013–14, the Library will begin transferring remaining print subscriptions to digital format where possible, completing the strategic move from print to digital collecting.

The PANDORA Australian web archive collection continued to increase, with a 14 per cent addition of new archived instances of websites and documents. The result was an increase of 29 per cent in the amount of data managed in the archive.

In May 2010, the Secretaries’ ICT Governance Board for whole-of-government arrangements gave approval for the Library to collect online government publications, resulting in bulk harvests of Australian Government websites in 2011, 2012 and 2013. The combined content collected in these harvests amounted to around 27 million files, or 2.1 terabytes of data. The Library will make this collection available in the second half of 2013 through the new access portal called the Australian Government Web Archive.

While Australian ebook publishing continues to evolve, most titles are still being produced in both print and electronic formats. The Library collects print versions through legal deposit, and has been negotiating with creators and publishers for the voluntary deposit of electronic versions where these can be made available for public access.

Australian print publications received through legal deposit declined during 2012–13. The number of print books received fell by approximately 15 per cent and the number of journal issues by around 10 per cent. While there are other variables influencing the receipt of legal deposit materials, such as publishers’ awareness of their obligations, this decline has been noticeable for some years. It reinforces the need for a legislative framework that enables the Library to receive e-publications through deposit in the same way that it does for print materials.

A project to preserve and digitise the Enemark Collection of 500 nitrate negative panoramic images (acquired by the Library in 1965) was completed. The images depict cities, towns and rural views in New South Wales and the Australian Capital Territory during the period 1917 to 1946. Their unusual format and fragility had meant they were not accessible prior to the digitisation.

As part of an ongoing program to upgrade collection storage equipment, 7,500 linear metres of older, motorised compact shelving were replaced. Refurbishment of the Strong Room with purpose-designed shelving and plan cabinets for outsized material has enabled a 75 per cent increase in storage capacity for the Library’s most valuable, rare and highly restricted collection material.

Behind-the-scenes volunteer activities were reviewed, with the aim of aligning them more consistently with the priorities of collecting areas. Volunteers contribute to a range of collection activities, including sorting, describing and researching collection material to improve access.

The Library acquired many interesting and significant materials during the year. A selection of notable acquisitions is listed in Appendix J. 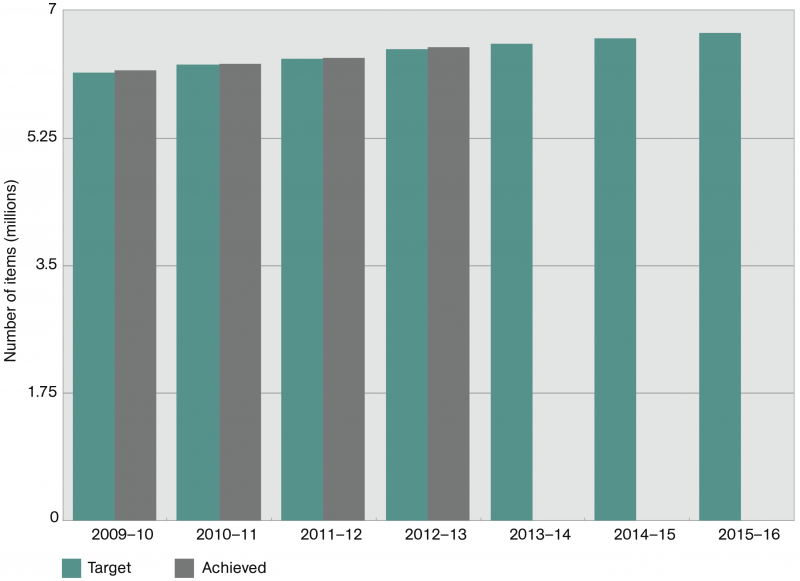 The average annual result is just below target. With the exception of the September quarter, conditions throughout the remainder of the year met or exceeded the 95 per cent target. 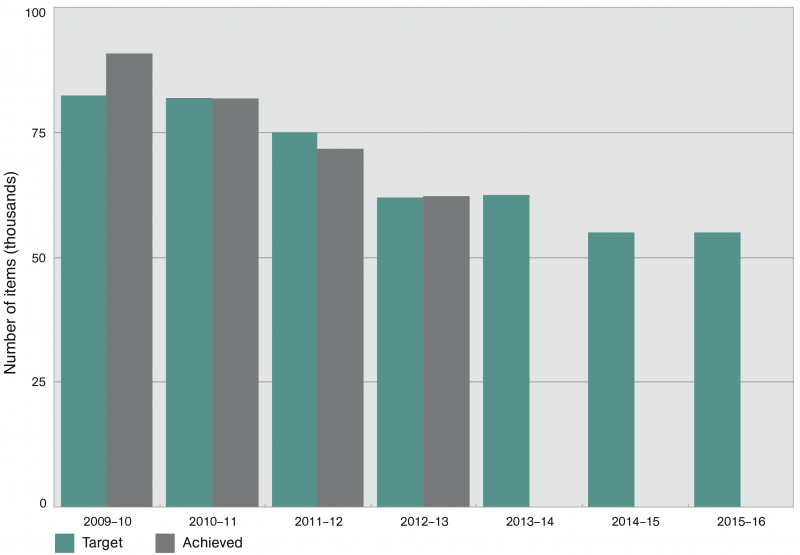 The target was exceeded. The target for this year had been reduced (by 10 per cent) to 85 per cent, in anticipation of the impact on staff training required to introduce the new Resource Description and Access (RDA) cataloguing rules. However, the move to the new cataloguing standard was achieved without the expected temporary decline in the time taken for processing.