Information technology (IT) is used to facilitate and support the development of new online services and to ensure that these services are cost effective, reliable and responsive.

In recent years, the Library has developed and improved the Library’s Trove service, which supports discovery and use of collections held by Australian libraries and collecting institutions. The Library has also commenced a major project to replace systems used to build, preserve and deliver digital collections. IT and communication infrastructure is provided inhouse.

During 2012–13, the Digital Library Infrastructure Replacement project moved from planning and procurement to its implementation phase. Milestones achieved during this period include:

During 2012–13, the Library’s digital collection increased in size by approximately 53 per cent, and now exceeds 2.5 petabytes of storage (see Figure 2.3). The major contributor to storage growth continues to be the digitisation of Australian newspapers (see Figure 2.4). Australian newspapers (62 per cent) dominate storage requirements, followed by archived web pages (25 per cent). 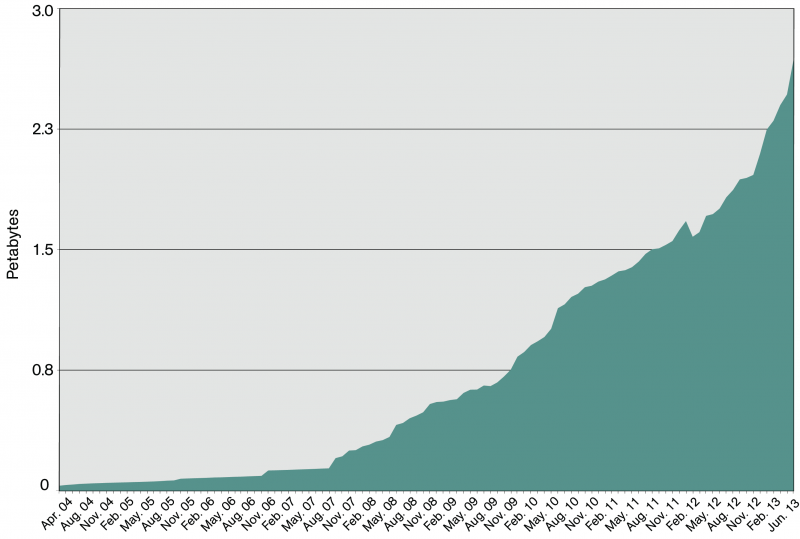 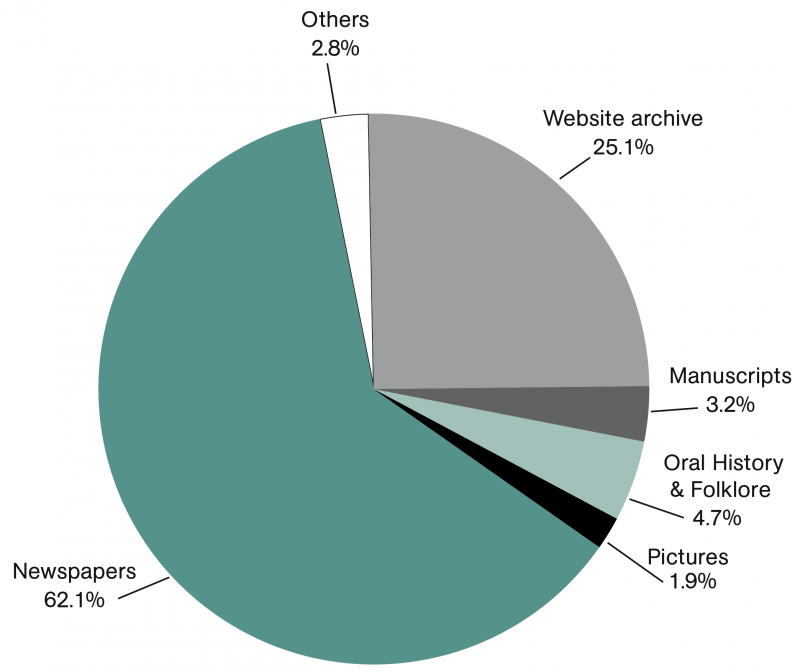 The Library also supports substantial infrastructure to enable the discovery of, and access to, its own and other collections. Figure 2.5 shows the growth in raw transaction load on the Library’s web services since 2000–01. Driven by the use of digitised Australian newspapers, Trove continues to experience strong growth in web activity. 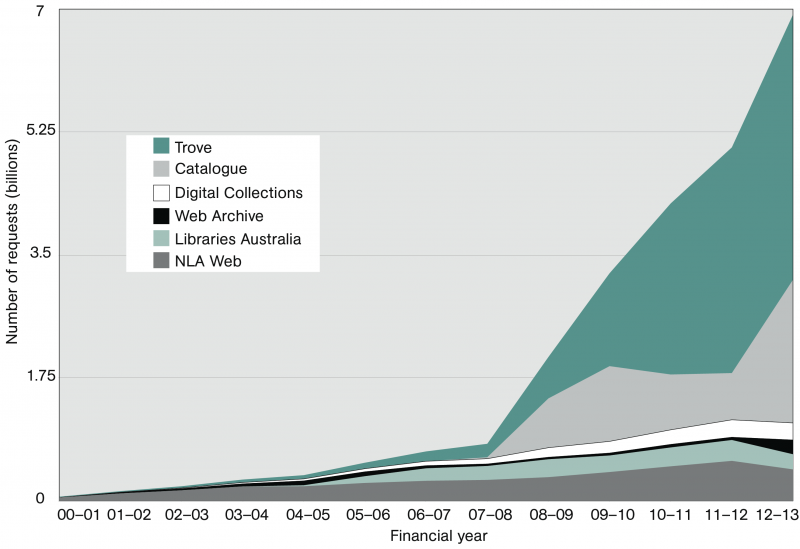 In 2012–13, the Library updated the design of its website (nla.gov.au), with significant changes being made to the homepage, including a more streamlined layout and a fresher and more accessible colour palette. In accordance with the Government’s Web Accessibility National Transition Strategy, the Library continued to improve accessibility of its website. Using a sustainable semi-automated process for the first time, the Library’s 2011–12 Annual Report was presented in a format accessible to people with disabilities using screen readers. With the exception of a few financial documents that, for auditing purposes, could only be rendered as Adobe PDF documents, the entire report was made available in HTML. An accessibility audit of the Library’s website found substantial compliance with Level AA Success Criteria of the Web Content Accessibility Guidelines 2.0, thereby allowing more engagement by users with disabilities. Outstanding issues to be addressed include transcripts to accompany audio-only podcasts, non-standard forms from third parties, and text alternatives to some images.

Reliable IT infrastructure is essential to the Library’s digital storage and access services. Table 2.6 shows the average availability of ten key service areas. The target availability of 99.5 per cent was not met for all services, the major contributing factor being an extended outage in September 2012 due to the failure of a primary server. However, the new disaster recovery site worked very well throughout the ordeal, and provided excellent communications to the public and staff, augmented by the use of Facebook and Twitter. Public response was positive and, although users were disappointed that services were unavailable, they were understanding as the recovery work was performed.

A number of heavily used online services—namely Trove and Libraries Australia—also experienced periods of slow performance or reduced functionality during periods of high load from web-based users and web bots. In 2012–13, the Library commenced redevelopment projects for Trove Newspapers and Libraries Australia Search, involving updates to the software and hardware infrastructure supporting these services. These improvements will provide the capacity and scalability needed to support current and future demands.

Under its Strategic Asset Management Program, the Library continued to replace and upgrade IT infrastructure, including:

In response to the expected application to the Library of the Government’s Protective Security Policy Framework and its Information Security Manual, the Library:

During 2012–13, the Library achieved modest improvements in energy consumption through:

IT development activities aimed at improving services and operations included: