Information technology (IT) is used to facilitate and support the development of new online services and ongoing infrastructure, and to ensure that these services are cost effective, reliable and responsive.

In recent years, the Library has developed and improved the Library’s Trove service, which supports discovery and use of collections held by Australian libraries and collecting institutions. The Library has also commenced a major project to replace systems used to build, preserve and deliver digital collections. IT and communication infrastructure is provided in-house.

Core infrastructure and capability to sustain and develop the Library’s digital collections and associated services is fundamental to the Library’s future. The Library faces critical issues in its ability to manage and maintain access to its born-digital and digitised collections, and its ability to support new types of collection materials over time. Our digital library infrastructure is inadequate for maintaining what we have now; it limits our capacity to develop the collection and meet client service needs, including through ways of collecting and increased digital access to our non-digital collections.

The DLIR project is a multi-year project to replace the Library’s existing digital library systems used to support digital collecting, digitisation, and delivery of digital content. It will also provide systems to support the active management and preservation of the Library’s digital collections. The project will deliver systems and a scalable infrastructure capable of supporting enhanced activities should additional funding be provided.

Central to the project approach was an open market procurement activity to purchase pre-existing software or services to deliver the software, supplemented by in-house development activities to implement components that cannot be purchased. In 2012–13, the project moved from planning and procurement to its implementation phase with the purchase of a digitisation workflow management system and a digital preservation repository system.

During 2013–14, the first of four implementation stages of the DLIR project was completed. Achievements for this period include:

During 2013–14, the Library’s digital collection increased in size by 30 per cent (728 terabytes), and now exceeds 3 petabytes of storage (see Figure 2.5). Digitisation of Australian newspapers and collecting of Australian web content accounted for 75 per cent of this storage growth. Figure 2.6 shows the allocation of storage by collection material type. 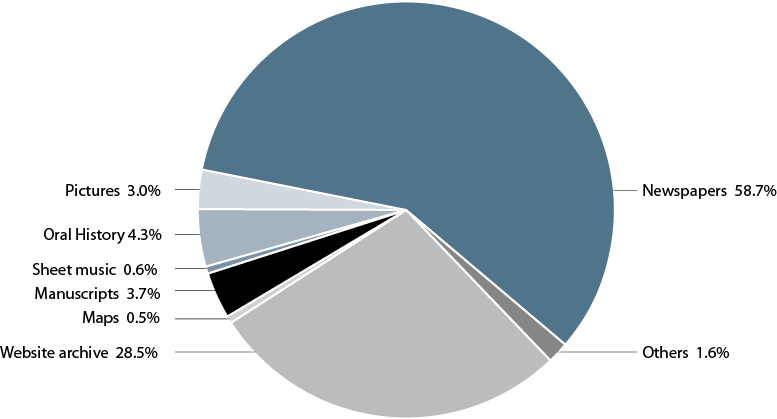 The Library also supports substantial infrastructure to enable the discovery of, and access to, its own and other collections. Figure 2.7 shows the trend in raw transaction load on the Library’s web services since 2000–01. Following what appears to be a spike in 2012–13 due to the behaviour of major internet search engines, growth has returned to trend in 2013–14. Raw transaction load continues to be driven by the use of Trove, especially its digitised Australian newspapers. 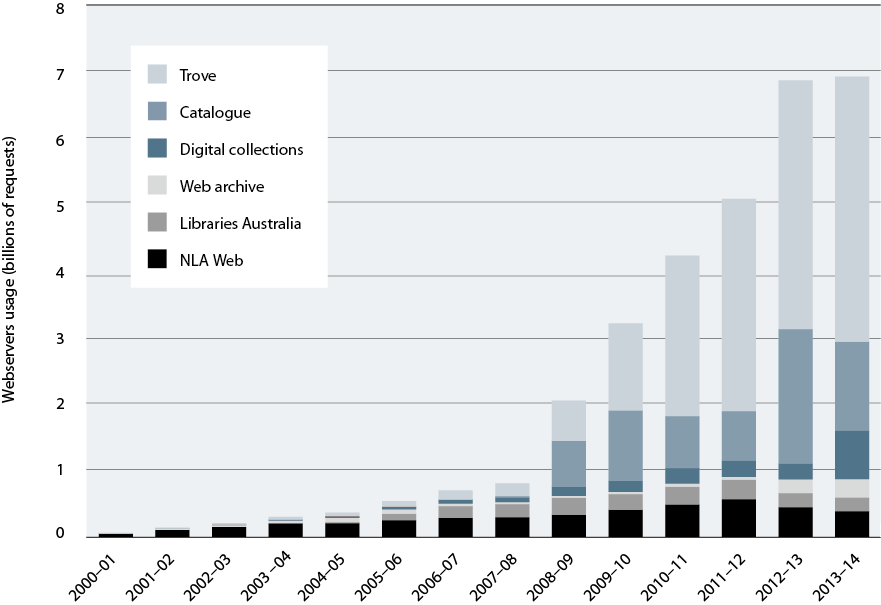 In 2013–14, the Library migrated its intranet into the Drupal content management system, which involved updating the design and reviewing the information architecture to allow for more efficient access to everyday work tools.

Reliable IT infrastructure is essential to the Library’s digital storage and access services. Table 2.7 shows the average availability of ten key service areas. The target availability of 99.5 per cent was exceeded for all service areas. This is a considerable improvement on the outcome for the previous year. Significant time and effort was put into restructuring aspects of the Library’s IT infrastructure to reduce single points of failure, enhance storage capacity and take advantage of the benefits of server virtualisation.

High-profile online services—namely Trove and Libraries Australia—which include user interaction and access by web bots from search engines such as Baidu and Google continued to be a source of substantial traffic. This has been managed by improved bandwidth controls. In 2013–14, the Library continued enhancements to search functions for Trove newspapers and Libraries Australia, which involved updates to the software and hardware infrastructure supporting these services. These improvements will provide the capacity and scalability needed to support current and future demands.

As part of its Strategic Asset Management program, the Library continued to replace and upgrade IT infrastructure, including:

In response to the expected application to the Library of the Government’s Protective Security Policy Framework and Information Security Manual, the Library:

The Library continued improving IT services and operations by: