The Library collects Australian printed publications under the legal deposit section of the Copyright Act, as well as selected materials in other formats, including oral histories, manuscripts, pictures, maps and e-publications. The Library also harvests and archives a snapshot of the Australian internet domain (.au).

Stage 1 of the DLIR project was completed in January 2014 and Stage 2 commenced in February. Stage 1 saw the implementation of the digitisation workflow component of the digital library core system, a new delivery interface for digitised books and journals, and implementation of the DocWorks system as the optical character recognition and content analysis software. Digitisation of books and journals began in early 2014 using the new system and by the end of the financial year, nearly 500 books, pamphlets and journals had been digitised.

Stage 1 of the DLIR implementation also covered digital preservation requirements. During the year, the Library procured a digital preservation management system, Preservica (formerly known as Safety Deposit Box), which operated in test mode in readiness for production mode in 2014–15.

The Library worked with colleagues in the Ministry for the Arts and Attorney-General’s Department in the preparation of a Regulation Impact Statement on a proposed legal deposit scheme for electronic publications. Discussion was held on the content of the proposed legislation and its regulatory impact on publishers.

In 2013–14, the Library transferred more than 200 overseas print serial titles to digital subscriptions, building on the strategic move from print to digital collecting that commenced with the introduction of overseas e-books in 2012–13. The overseas e-book collection continued to grow and now comprises more than 1,550 titles, all of which are available for offsite access by registered Library users. Usage has increased steadily, with an average of more than 160 logins per month, of which almost 60 per cent are offsite via remote access. This change provided improved access particularly for users based outside Canberra.

The Library released the Australian Government Web Archive in March 2014. The archive enables searching and online access to Commonwealth government website content collected by the Library through annual harvests since 2011. It was a timely development as government publishing has substantially migrated online, with a 25 per cent decline in print monographs deposited. The harvesting of content via the Australian Government Web Archive was authorised by a whole-of-government agreement in 2010. The archive will provide access to this content until the later stages of the DLIR project, which will provide integrated discovery and delivery through Trove.

The development of the capacity to manage the acquisition and description of born-digital personal records progressed, with the successful transfer of digital collections of former Senator Bob Brown, historian Rupert Gerritsen and photographer Francis Reiss, and the development of associated policies, workflows and procedures. Digital manuscript systems are being trialled to ensure the continued accessibility and authenticity of digital records transferred to the Manuscripts Collection.

The ongoing shift from collecting film and paper-based photographs to digital photography continues, with 64 per cent of photographic acquisitions in 2013–14 being digital.

Nearly all of the Oral History and Folklore Collection recordings are born-digital. Taking advantage of this, the Library has been developing systems and technologies which allow the automated or semi-automated ingest of digital audio collection materials and associated descriptive information, leading to improved processing efficiencies. Over the last ten years, the Library has more than doubled its acquisition of audio recordings to more than 1,900 hours in 2013–14, of which 903 hours were acquired by semi-automated ingest.

The Australian publishing community’s uptake of digital publishing has increased significantly over the last two years. The Library continued to receive offers from publishers to voluntarily deposit e-books, with over 100 offers this year. Further evidence was an increase in applications for Cataloguing-in-Publication records for e-books or dual-format publications, up from 4 per cent two years ago to over 25 per cent this year.

The Library collected some 14,000 Australian print books during the year. A third were from government publishers and the remainder were acquired through the legal deposit provisions of the Copyright Act. Half of the legal deposit books acquired were published by the largest 20 commercial publishers, and the other half by individuals, micro-publishers and organisations. Large commercial publishers have moved rapidly into digital publishing in the last two years, with most large publishers now having digital imprints and publishing digital-only books in Australia. Australia’s highest volume publisher is the romantic fiction imprint Harlequin, which has a strong imprint exclusively publishing Australian authors in digital form. The amount of digital material deposited on physical media continues to decrease, representing the decline of physical media in digital publishing, where online services and direct-to-device distribution is replacing publishing on DVD or CD.

Should legislation for a revised legal deposit framework be passed in the coming year, the Library will work closely with publishers to communicate the proposed changes and prepare for the beginning of a new era in the operation of legal deposit in Australia.

The Library became the second national library worldwide to have its policy decisions on RDA, the new international cataloguing rules, published in the RDA online toolkit. With the new standard now widely adopted in the English-speaking world, the Library will continue to advocate for the redevelopment of the Machine-Readable Catalogue (MARC) format, so that the intent of the new rules can be fully realised. This will make library catalogue records easier to produce, improve the user searching experience and enable library data to be shared in an open data environment.

In a year marked by the success of the Library’s Mapping Our World exhibition, it was pleasing to obtain donor funding to support two significant map preservation projects. With funding donated through a special appeal, a conservator was engaged to work on a collection of nineteenth-century atlases and maps of Australasia produced by the cartographer Frederick Proeschel (1809–1870). The works were extensively treated, including surface cleaning, fibre analysis, removal of varnish and repair to binding structures.

The second project focused on the Library’s landmark acquisition in 2012–13 of Joan Blaeu’s Archipelagus Orientalis, sive Asiaticus, a 1663 wall chart in its original unrestored state. Preservation staff carried out basic stabilisation to allow for its display in Mapping Our World, but additional treatment work is required to ensure the map’s long-term preservation. Following the successful appeal, the next step is to undertake a complete assessment of the map, including historical research and scientific examination to make treatment recommendations.

The Library acquired many interesting and significant materials during the year. A selection of notable acquisitions is listed in Appendix I. 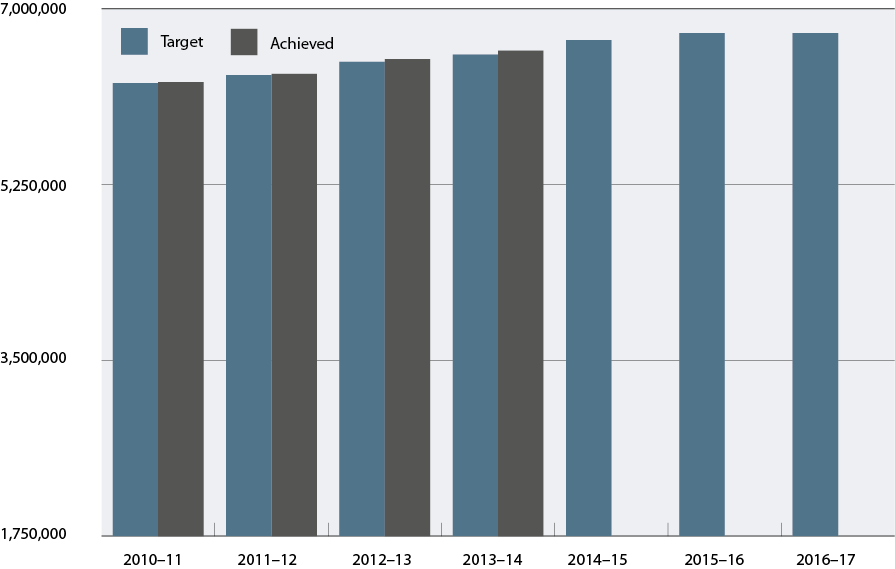 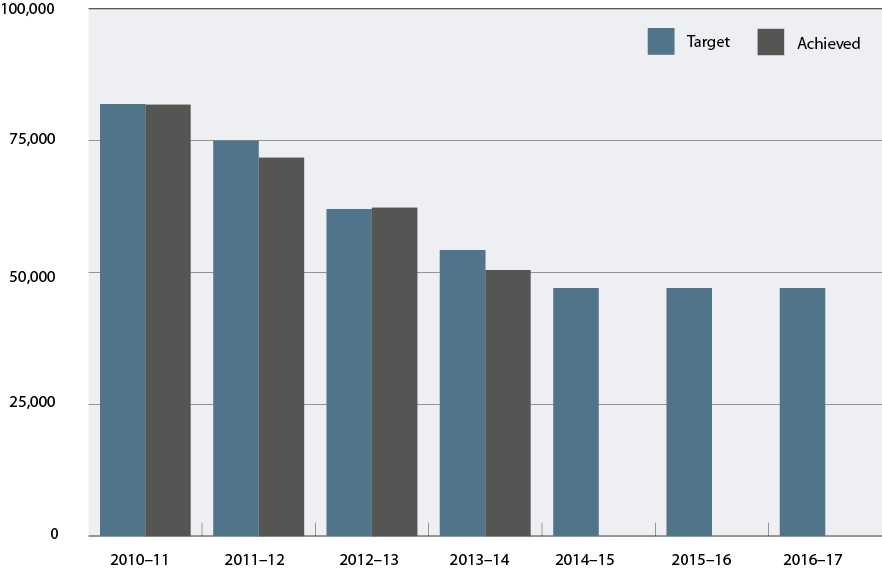 The target was not met. Over recent years, acquisition numbers have trended downwards as fewer Australian print publications are produced and acquired and the Library implements its planned reduction of overseas collecting.

The target was not met. Increased staff movements and the resulting need for more refresher and other training has impacted on processing standards.