The Australian National Bibliographic Database is Australia’s largest single bibliographic resource and lies at the heart of the Libraries Australia service suite. The database represents the holdings of more than 1,200 Australian libraries from all states and sectors and reached a milestone of 25 million records in January 2014. This achievement represents 32 years of leadership by the Library, and fruitful national collaboration.

Use of the Libraries Australia service continues to grow. Work on a major redevelopment of the Libraries Australia search service was completed and made available to members in July 2014. This service is used by 1,200 Australian libraries to support their cataloguing and collection management workflows. The redevelopment included the replacement of the underlying software to deliver improved performance, capacity to support large-scale data quality improvement projects, and a more usable and efficient interface.

Additional software innovations were completed, including automatic record duplication detection and removal (previously a manual task), and the capacity for Library staff to perform large-scale quality checks and changes that previously required assistance from third-party programmers. The Libraries Australia Document Delivery service also benefitted from a system upgrade to improve functionality and performance for members.

Another benefit to libraries participating in the Libraries Australia service is the global exposure of their collections via WorldCat, the world’s largest aggregator of bibliographic records, and Trove, which combines bibliographic records with digital and full-text resources including Australian newspapers.

As the centenary of the First World War approaches, the value of the Trove application programming interface (API) in making Australian collection data available in re-usable forms has been realised through a number of projects undertaken by third parties across Australia and the world. The War Herald website displays each day’s war-related news from a century ago, drawing in content through the Trove API. On a much larger scale, Europeana has redeveloped its portal to First World War resources and now includes a federated search across collections from Europe, America, New Zealand and Australia, using the APIs of Europeana, Digital Public Library of America, DigitalNZ and Trove. This is an excellent example of the role played by aggregators such as Trove in offering the world an entry point to Australian collections.

The Library has taken a leadership role in showcasing the possibilities afforded by API access to large cultural datasets. After several years of advocacy and direct outreach to library audiences at workshops and conferences, Australian libraries are beginning to experiment with making their content available through multiple interfaces and developers continue to develop experimental interfaces to Trove content. These innovative uses of the Trove API are now featured in an application gallery as part of the new Trove Help Centre. Among them are TroveNewsBot, which was nominated for the 2014 Digital Humanities Awards, and Paper Miner, an experimental maps-based interface to Trove content developed by the Smart Services Cooperative Research Centre. Serendip-o-matic, a new tool for the exploration of cultural collections around the world, includes content sourced from Trove.

Trove continues to provide aggregated access to Australian research material and access was improved this year with one new repository added. Harvesting of this content has also been improved, and records are now tagged with Australian Research Council and National Health and Medical Research Council research identifiers where appropriate. This enables easier discovery of publicly funded research, and opens up new possibilities for exposing open access resources. For example, ePress open access books from the University of Technology, Sydney, can now be found in Trove and two new open access journals have recently been added.

The Library continues to work collaboratively on a range of projects aimed at transforming and aligning services offered by national, state and territory libraries so that the needs of Australians for access to library services in the digital age can be better met.

The Library is leading the NSLA Digital Preservation Group, which will drive digital capability development over the next decade or more. During the year, the group developed a joint statement on digital preservation, defined a matrix outlining the most important components of digital preservation systems, and developed a model for a technical registry and format library for NSLA libraries.

The Library is leading the NSLA Storage Management Group, which shares best practice in library storage through work such as developing a costing tool, standards, policy and practice. The Library also co-led projects on managing and providing access to very large collections of pictures and maps.

From March 2014, Trove staff participated in regular teleconferences with content aggregator counterparts at Europeana, Digital Public Library of America and DigitalNZ. These meetings offer a significant opportunity to share knowledge and expertise, and learn from the experiences of Trove’s peer services on topics as diverse as business models, service impact assessment, managing rights, harvesting and metadata.

Throughout the year, Library staff engaged in 88 initiatives to strengthen ties with other countries. These ranged from formal visits by ambassadors, politicians and senior colleagues from other cultural institutions to participation in conference programs as speakers, presenters or panel members, providing advice and sharing knowledge and expertise across a range of Library services, initiatives and activities. The Library also hosted visits by international colleagues and undertook visits to other international libraries and cultural institutions.

This was the first year in which cloud-related changes impacted on the Library’s role as a metadata aggregator.

Traditionally, individual libraries and other cultural organisations have installed and run a dedicated ILMS or CMS, and managed their own data storage, backup and security. Cloud-based systems have changed this paradigm, with systems and data managed by third parties and customers using web-based interfaces to interact.

The effects of these changes are apparent in both the Libraries Australia and Trove environments. Two cloud-based ILMS are in use by Libraries Australia members: one for large research libraries, and the other for small- to medium-sized libraries. While fewer than 40 of the 1,200 members have implemented cloud-based systems to date, considerable effort has been required to manage the significantly different data flows from these systems. The change has required investment of staff time and expertise, and processes are not yet fine-tuned, but the Library is nevertheless confident that the advent of these systems will, in time, improve the coverage and currency of Libraries Australia data.

At least one cloud-based CMS, with capacity to share museum and gallery data using standards-based protocols, is now in use in Australia, resulting in a steady stream of small- and medium-sized museums and historical societies adding their collections to Trove.

Table 3.6 shows deliverables and key performance indicators in relation to providing and supporting collaborative projects and services in 2013–14. 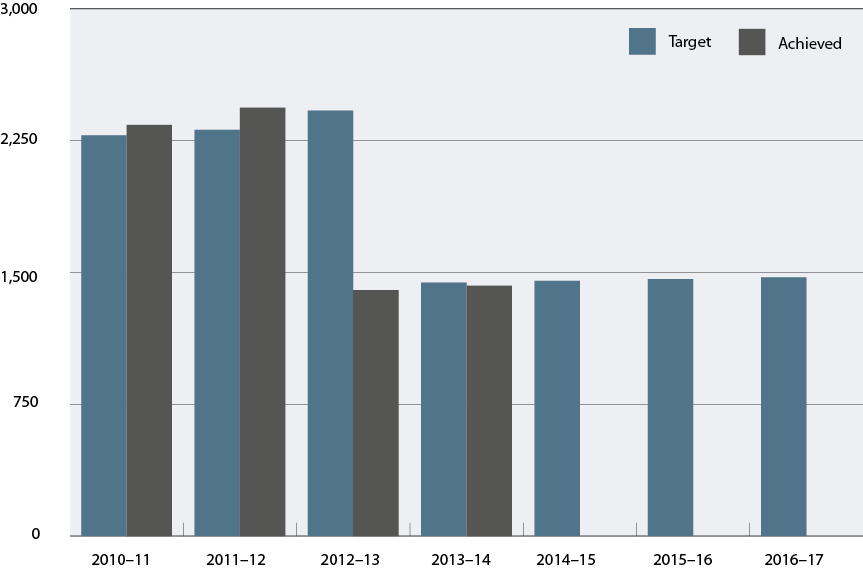 The target was not met, due to the closure or amalgamation of an increasing number of state and Commonwealth government libraries during the year.

A comparison over the past four years of the number of records contributed by subscribing agencies is provided in Figure 3.5. 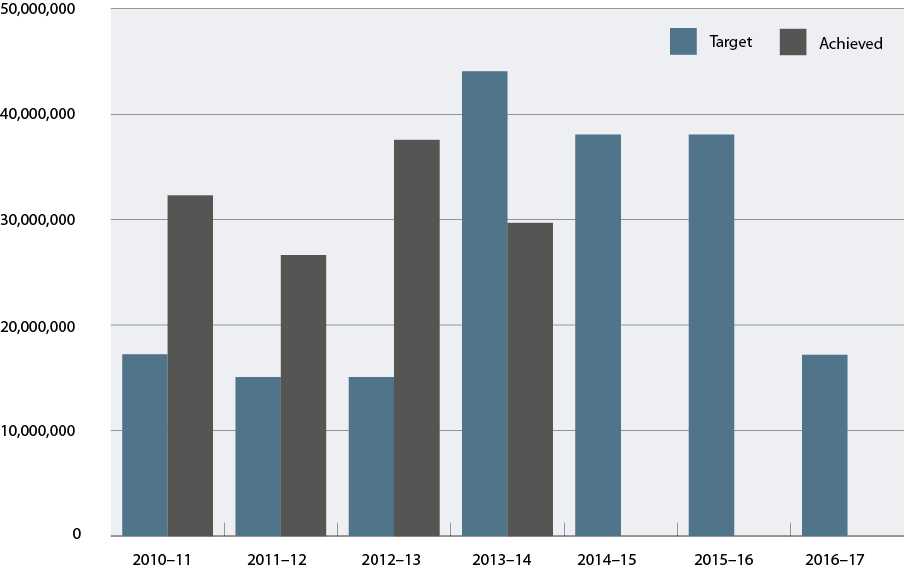 The target was not met. The anticipated number of newspaper articles contributed to Trove was not achieved. During the year, one of the subscribing agencies scaled back its newspaper digitisation activity to meet adjusted priorities.

Table 3.7 shows performance against the standards and timeframes for collaborative services.