The Library collects Australian printed publications under the legal deposit section of the Copyright Act, as well as selected materials in other formats, including oral histories, manuscripts, pictures, maps, e-publications and websites. The Library also harvests and archives a snapshot of the Australian internet domain (.au).

The benefits that the DLIR project will deliver for the Library’s digital collecting and preservation programs are being progressively achieved across all stages of the project, with major outcomes for the published collections expected in 2015–16 and 2016–17. This year saw completion of requirements for systems that will enable the ingest and management of published books and journals.

The passage in June 2015 of the revised legislative provisions for legal deposit of electronic publications was the culmination of two-and-a-half years of intensive effort by senior Library staff together with colleagues from the Ministry for the Arts and the Attorney-General’s Department. The ability to collect electronic as well as physical Australian publications through the provisions of legal deposit makes it possible for the Library to properly fulfil its mission to collect and preserve the Australian publishing record.

The legislation provides for a unified approach to deposit of library material, whether in electronic form or printed. However, unlike print publications, which must be deposited within a month of publication, electronic publications would be required to be delivered on request, which would be done automatically in the case of web-based publications.

Since the legislation was first introduced to the Senate by the Attorney-General in October 2014, detailed work on policy, procedures and legal matters relating to the legislation has been completed. The passage of the legislation on the last sitting day of the winter session of Parliament came as a great relief to the legislation’s many stakeholders inside the Library. The new provisions will change a great deal about the Library as it goes about its core business: it will change the systems the Library develops; the services it can provide; and the relationships it has with Australia’s publishing community.

Turning to the legal deposit scheme’s many stakeholders outside the Library, it is anticipated that once the legislation comes into force, six months after royal assent is given, the new provisions will be introduced gradually. The Australian publishing community will need to be informed of the changes and given time to adapt to them. Advice and guidelines for publishers form the most important part of the Library’s communication plan. The Library will work closely with publisher groups to communicate and discuss the new collecting requirements.

In the last seven years, the publishing and creative environments in Australia have seen many changes. In 2014–15, the Library began work on the revision of its 2008 Collection Development Policy in order to better reflect these changes and communicate its purpose as it builds rich, engaging and relevant collections available to Australians. The revised policy, which will be issued in the first quarter of 2015–16, will adopt a new approach in presenting general collecting principles that apply across collection formats and types, whether in print, electronic or another format, and across publications, pictures, manuscripts, music, maps, oral histories, ephemera, websites and many other forms of library material. The policy sets out the scope, priority and principles of stewardship of collecting activity.

The focus of the Library’s digitisation program over the last three years has been newspaper digitisation, conversion of analogue oral history recordings to digital format and a varied program of in-house image-based digitisation, such as pictures, maps and music. The Library revised its digitisation policy and issued a new strategic plan setting out digitisation directions for the next three years. The new policy takes into account the value of external partnerships in building resource capacity to create new digitised content.

The Library developed a Discovery Services Master Plan in October 2014 to inform long-term directions in the provision of access to and discovery of the Library’s collections. The plan sets out principles and goals to guide Library decision-makers faced with many choices in a complex and fast-moving information environment.

The Library evaluated the market for replacement software products for its library management system. It was decided to replace the system in a phased sequence. The first phase is the procurement of a new discovery service to replace the Library’s existing Catalogue and e-Resources portal. A request for quotation was issued in April 2015 for the procurement of library discovery service software, with an announcement expected in the first quarter of 2015–16.

The second phase will see the replacement of the back-end library management system used by staff for acquisitions, cataloguing and collection control functions. This process will begin following the implementation of the discovery service. 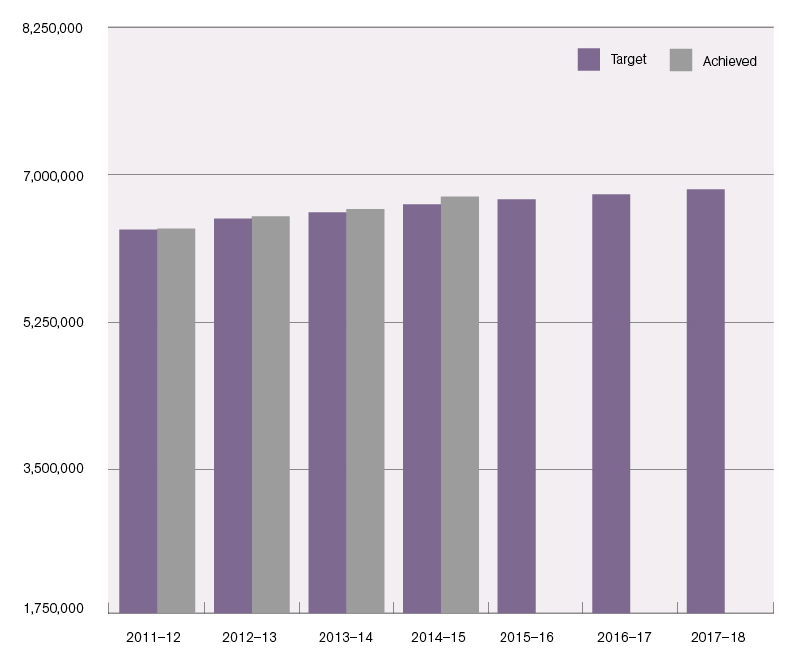 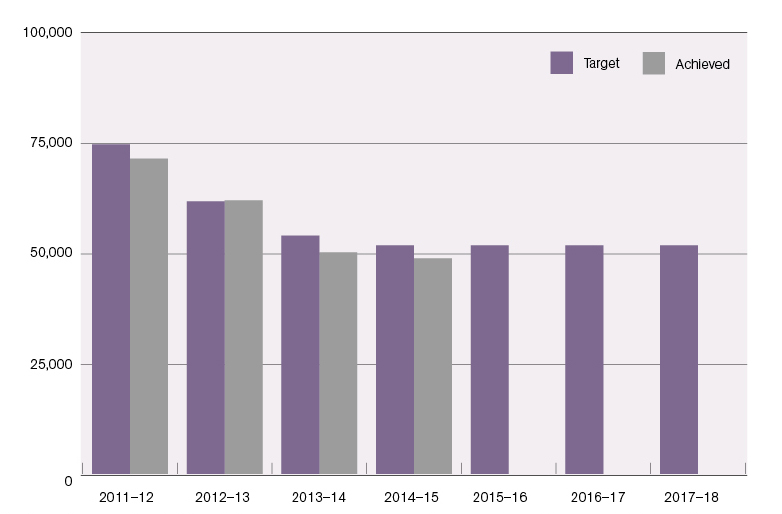 The target was not met. Receipts of overseas monographs were lower than projected and therefore fewer records were loaded.

The target was not met. Processing backlogs reported throughout the year were eliminated during the June quarter. However, recruitment delays and increased staff movements have contributed to the full-year outcome falling short of the target.