The Libraries Australia service is used by Australian libraries to support their cataloguing and collection management workflows. The Australian National Bibliographic Database is Australia’s largest single bibliographic resource and lies at the heart of the Libraries Australia service suite. The database represents the holdings of more than 1,200 Australian libraries from all states and sectors and contains over 26.5 million records. Following the introduction in March 2013 of the new cataloguing standard, Resource Description and Access (RDA), a major milestone was reached in March 2015, with over one million RDA records represented on the national database.

Redevelopment of the Libraries Australia search service was completed in July 2014, delivering greatly improved processing performance, new functionality and a modern and well-received user interface. Increased use of software to support automatic record duplication detection and removal, and data enrichment, together with additional activities to enhance metadata quality, have benefited all participating libraries. An initiative to reassess manual intervention and focus on deploying automated data quality improvement tools eliminated the backlog of records set aside for human reviewing and increased timely access to quality data for participating libraries.

These improved processing tools have allowed libraries to more easily contribute their local collections to Libraries Australia, before flowing to WorldCat, the world’s largest aggregator of bibliographic records, and Trove, the national discovery service.

In addition to a significant increase in the volume of the digital content delivered directly via Trove, the year has seen an increase in the number and diversity of organisations contributing metadata so that their digital collections can be discovered via Trove. While museum content has been a particular focus, contributions have increased from other sectors, including galleries, libraries, archives and government departments. Thirty new contributors joined the Trove community during the year, of which 20 were museums.

Library staff have made innovative use of harvesting tools to expand the range of resources that can be discovered through Trove. Many potential content partners do not have the technical capacity to provide resources in a standard form. Work with major contributors, such as ABC Radio National, enabled the Library to develop skills and methods that can be used with a broader range of content sources, opening up new opportunities for collaboration and accelerating the rate at which new contributors can be added.

Trove now includes an important collection of images from the Australian Paralympic Committee. The images were harvested from Wikimedia Commons and cover the history of the Paralympic movement, mostly dating from the Sydney 2000 Paralympics onwards, with a small number documenting the early history of the Paralympic movement, including the 1962 Commonwealth Paraplegic Games team photograph. Content documenting Australia’s political history has also received a boost. New and updated collections in Trove include: biographies and press releases from the Australian Parliamentary Library; records from the Sydney’s Aldermen website, developed by the City of Sydney; records from the Biographical Dictionary of the Australian Senate; and archives from the John Curtin Prime Ministerial Library.

The Library has collaborated with universities and funding agencies to improve access to Australian research via Trove, advising university repositories on the inclusion of grant identifiers in their records. When harvested, these identifiers can be searched, making it easy to find research publications funded by a particular grant or agency. The National Health and Medical Research Council has used the Trove Application Programming Interface (API) to build a custom search interface that highlights research funded through their programs. Building on its existing researcher identification infrastructure, the Library has added more than 5,000 profiles of Australian researchers from the Open Researcher and Contributor ID (ORCID) service. ORCID identifiers are widely used within the research sector and are supported by funding agencies. By including ORCIDs, the Library further integrates its efforts with national research infrastructure and offers another pathway for discovering Australian research.

While much has been gained by increasing community awareness of the benefits of joining Trove, some improved policy and technical capacity across the collecting sector, and innovative use of technology by staff, the Library’s capacity to increase or continue its unfunded work beyond the library sector is limited. It will be further constrained in out years unless a sustainable business model can be established to cover the costs of aggregating and maintaining contributor metadata, and making the national collection discoverable through high-performance infrastructure accompanied by interfaces that meet the needs of a broad cross-section of the Australian community.

The Library continues to work collaboratively on a range of projects aimed at transforming and aligning services offered by national, state and territory libraries so that the needs of Australians for access to library services in the digital age can be better met.

The Library co-led a work package to analyse pictures digitisation and description workflows in NSLA libraries. Data was analysed, a survey undertaken and site visits to four institutions identified potential for improvements and created a model to enable greater efficiency.

The NSLA Digital Preservation Group collaborated with a group of international partners to submit a project funding bid to the European Commission Horizon 2020 program for a common technical registry of file formats with software and hardware dependencies. While the bid did not succeed at the first attempt, it is now being reworked for submission in 2016.

Meanwhile, it is pleasing to note that the Digital Preservation Environment Maturity Matrix, developed by the NSLA Digital Preservation Group with considerable input from the Library, has been adopted by national, state and territory government record-keeping institutions in Australia.

The newly formed NSLA Legal Deposit Group has focused its efforts on achieving common approaches and synergies in the management of legal deposit in NSLA libraries, covering collecting approaches, legislation, promotion and relations with publishers. During the year, a centralised website was released containing up-to-date information on legal deposit for publishers in all states and territories. Good progress was made on a further work package on the legislative and regulatory frameworks for the legal deposit of born-digital publications. A survey was conducted and an indicative proposal developed for a project exploring collaboration to facilitate joint deposit by publishers for libraries with existing legislation.

The Library has two representatives on the NSLA Digital Skills Working Group. The group identified a need for digital skills development at the practitioner, intermediate and specialist staff levels among member libraries’ staff. The group assessed available programs and selected a week-long training program on ‘digital fundamentals’—digital collecting and digital preservation—delivered by the United States Library of Congress Digital Preservation Office. The course was held in June 2015 for 24 NSLA library participants. It took a ‘train the trainer’ approach, with participants to develop and present modules in their own libraries in the following months. The work of the Digital Skills Working Group in 2016 will build on the digital fundamentals course, with the next round to focus on practitioners’ requirements, including investigation of ingest and preservation systems. There could also be opportunities to share the curriculum with other parts of the gallery, library and museum sectors in various states and regions.

The Library is leading the NSLA Storage Management Working Group, which shares best practice in library storage through work such as developing a costing tool, standards, policy and practice. The Library also co-led projects on managing and providing access to very large collections of pictures and maps.

A review of the NSLA e-Resources Consortium concluded that the consortium offers members direct savings on subscription costs, internal business process savings and a range of valuable intangible benefits. NSLA CEOs affirmed the consortium’s ongoing value and endorsed continuation of the consortium—under the Library’s management—until 2018–2019.

GovHack 2014 was held across Australia on the weekend of 11–13 July. GovHack is a national competition aimed at encouraging the creation of innovative applications using open government data. Once again, NSLA sponsored a prize for the best use of the Trove API. In return, Trove’s value was recognised by receiving the GovHack award for ‘Highest Voted Government Data’.

Library staff engaged in more than 1,500 new and ongoing contractual collaborations with national and international cultural and educational institutions. The collaborations include Memoranda of Understanding (MoUs) with the national libraries of China, Taiwan, India and Spain, and an MoU to join the Recognition and Enrichment of Archival Documents (READ) consortium, which aims to develop a production system for handwritten text recognition (the equivalent of optical character recognition). The consortium cited the Library’s newspaper text correction achievements as an exemplar of innovation in its funding application and welcomed our inquiry about participating in the consortium.

Throughout the year, Library staff engaged in 98 initiatives to strengthen ties with other countries. These ranged from formal visits by ambassadors, politicians and senior colleagues from other cultural institutions to participation in conference programs as speakers, presenters or panel members, and providing advice and sharing knowledge and expertise across a range of Library services, initiatives and activities. The Library also hosted visits by international colleagues and undertook visits to other international libraries and cultural institutions.

The Library continued to respond to a wave of libraries migrating to cloud-based library management systems, requiring new ways of facilitating metadata aggregation into Libraries Australia. Working directly with two major system vendors has significantly improved the currency and coverage of Australian library holdings on the Australian National Bibliographic Database, with an additional one million bibliographic records now discoverable via Libraries Australia and Trove. New and existing audiences have re-engaged with the Libraries Australia service through a refreshed approach to working with groups of libraries clustered around common library management systems. One tangible outcome of this approach is that 18 libraries from an under-represented sector have joined Libraries Australia and added 0.5 million new records to the national database.

Table 3.6 shows deliverables and key performance indicators relating to the provision and support of collaborative projects and services in 2014–15. 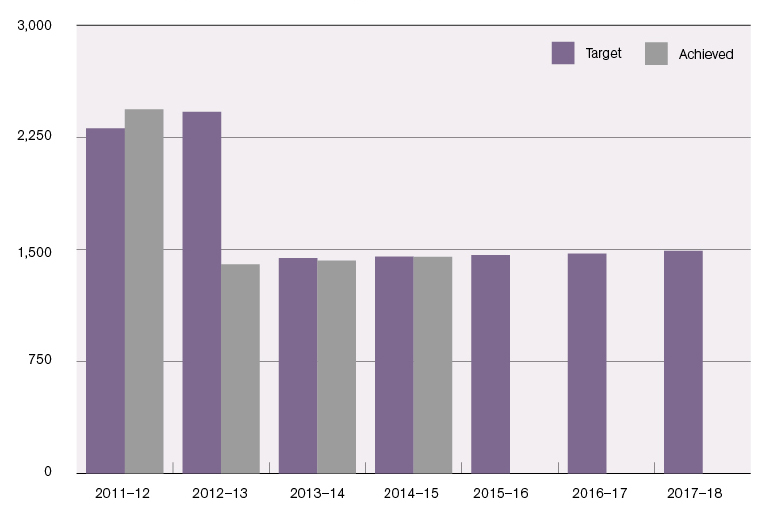 The target was not met, due to the closure or merger of an increasing number of Commonwealth and state government libraries during the year.

A comparison over the past four years of the number of records contributed by subscribing agencies is provided in Figure 3.5. 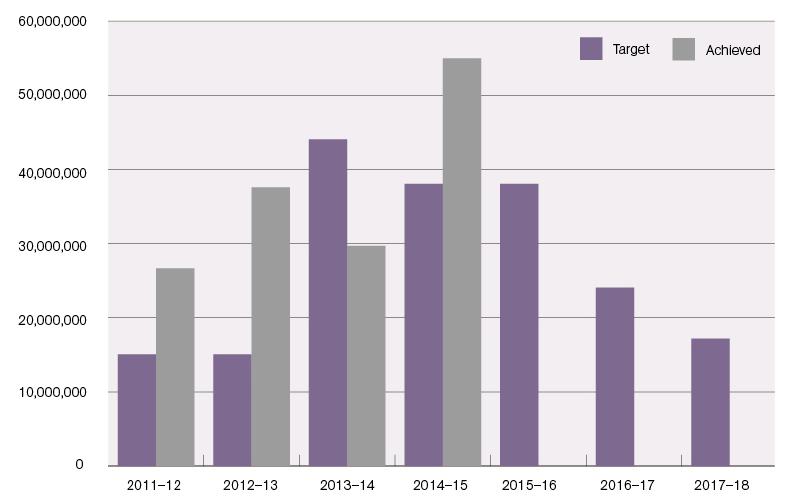 The target was exceeded, due to increased newspaper digitisation and the loading of several million records to Libraries Australia by libraries migrating to cloud-based library management systems.

Table 3.7 shows performance against the standards and time frames for collaborative services.

The target was exceeded.