The total comprehensive loss for 2014–15 was -$159.598 million, which is primarily related to changes in the asset revaluation surplus (-$150.513 million) where there were decreases in the valuation of the tangible component of the national collection (-$152.696 million) partially offset by increases in the value of buildings ($2.183 million). Following the revaluation, the value of the tangible component of the national collection decreased to $1,337.636 million. The reduction in value reflects the inherent uncertainty and risk in estimating the value of a large, expansive and unique collection. Active markets do not exist for many items held in the collection and a high level of estimation is required by the specialist, independent valuers. Values are calculated and extrapolated against like collection items. With millions of items in the collection, extrapolations are prone to high sampling risk and, consequently, significant movements from valuation to valuation are not unexpected. In 2014–15, the reduction arose mostly from a fall in the average values of items sampled from the general manuscripts collection (-$47.788 million) and the photographic collection (-$95.401 million). Overall, the 2014–15 value is within the 2013–14 relative standards of error and confidence levels.

Excluding the changes in the asset revaluation surplus during 2014–15, income, including revenue from government, amounted to $66.558 million and expenses were $75.643 million, resulting in a deficit of $9.085 million. From an income-statement perspective, the Library does not receive appropriation funding for depreciation of the national collection (totalling $12.173 million), which forms part of operating expenses. Government funding for the purchase of collection material is provided through an equity injection totalling $9.792 million. 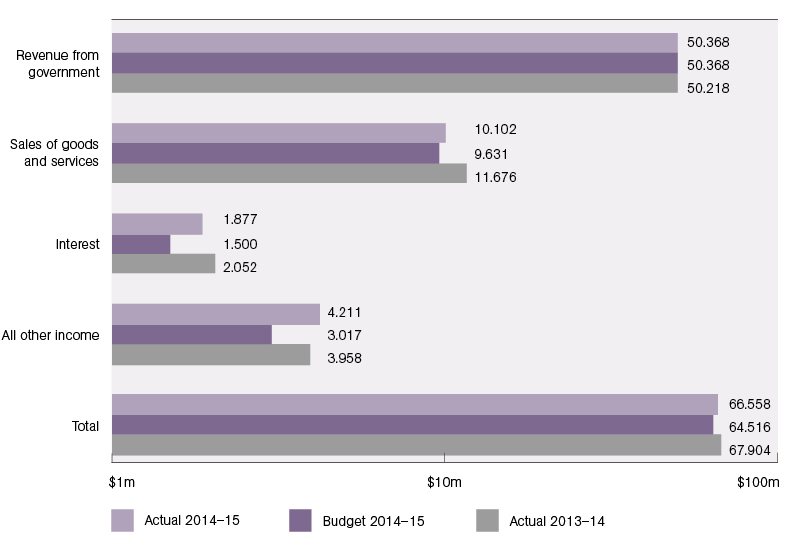 The major variations between financial years relate to decreases in the sales of goods and services (-$1.574 million), largely due to decreases in revenue received from corporate sponsorship (-$0.673 million) and the Library Bookshop (-$0.594 million), which are related to the Mapping Our World exhibition held during 2013–14, and consultancies (-$0.231 million), which are primarily related to the digitisation of collection material for other libraries. The reduction in interest revenue (-$0.175 million) is largely the result of a general decline in deposit rates and a decline in the funds available for investment. There was an increase in government revenue ($0.150 million), which is the net effect of efficiency dividends, parameter adjustments and previous budget measures. 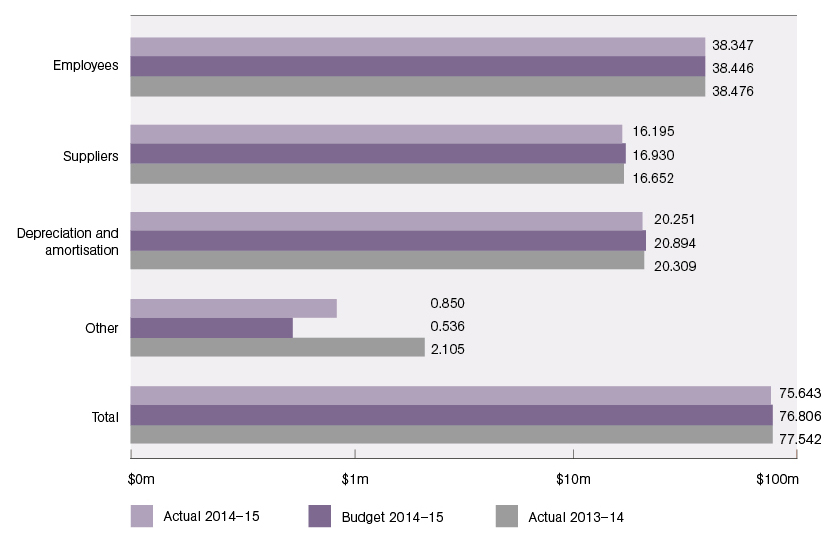 Supplier expenses were lower (-$0.457 million) than 2013–14, with the major variations primarily relating to Mapping Our World, and included reductions to the cost of goods sold publications and Library Bookshop (-$0.482 million), exhibitions freight ($-0.425 million), promotional advertising (-$0.287 million), insurance (-$0.138 million), travel (-$0.139 million) and promotional activities (-$0.080 million). There were increases across supplier expenses, including contractors and consultants ($0.813 million), software maintenance ($0.206 million), property operating expenses ($0.126 million) and workers’ compensation premium ($0.125 million). There was an increase in the use of contractors and consultants for a project to reorganise the storage of the collection.The increased expenditure on software maintenance was largely the consequence of the purchase of additional software, some of which was acquired for the DLIR project.

The decrease in other expenses (-$1.255 million) was primarily due to higher write downs (-$1.016 million) in 2013–14, most of which were due to revised procedures following a review of Library for sale publications by an independent consultant. Also contributing to the variation in other expenses was a loss from asset sales (-$0.238 million) in 2013–14 due to revised timing arrangements for the replacement of some information technology equipment. 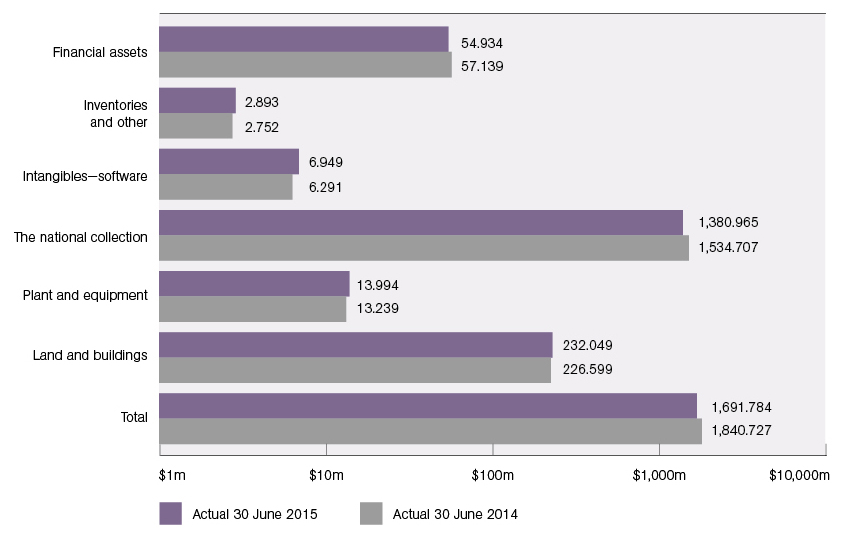 The decrease in non-financial assets (-$146.738 million) was largely the result of the revaluation of the Library’s tangible collections (note the comments under ‘Operating Outcome’) and buildings (a net decrement of -$150.513 million), and the net difference between current-year assets acquisitions, disposals and current-year depreciation expenses ($3.634 million). In addition, there were decreases in the value of inventories and other (-$0.030 million) and an increase in the value of prepaid supplier expenses ($0.171 million). The decrease in financial assets (-$2.205 million) relates primarily to a decrease in investments (-$1.498 million) and cash at bank (-$0.888 million), offset by increases against other financial assets ($0.115 million) and receivables ($0.066 million).

As Figure 1.4 shows, the Library’s total liabilities increased by $0.863 million from last financial year to $17.729 million. 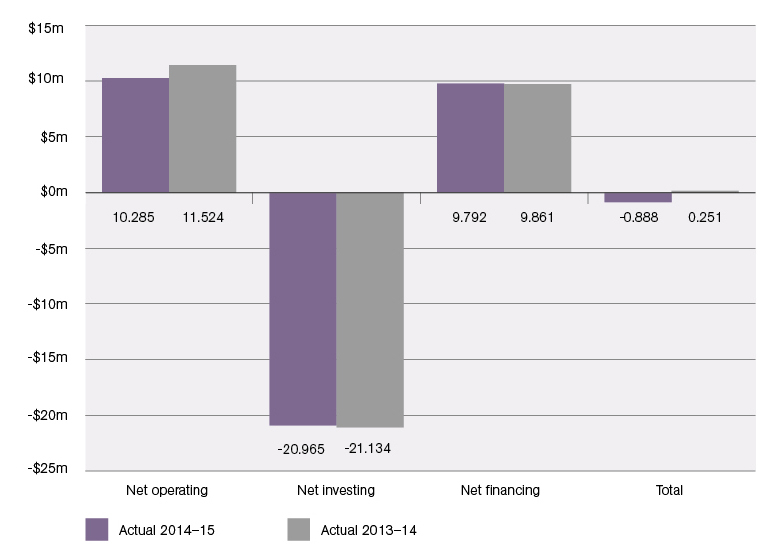 The decrease in net cash from operating activities (-$1.239 million) reflects the comments under ‘Income’ and ‘Expenses’. The minor movement in net cash used by investing activities (-$0.169 million) primarily reflects the net movement of funds from investments to cash at bank between years (-$4.041 million) and an increase in the purchase of property, plant, equipment and intangibles ($3.820 million). There was a minor decrease in net cash from financing activities between financial years (-$0.069 million) as a result of a slight reduction in the Library’s equity injection, provided by government to fund collection acquisitions.