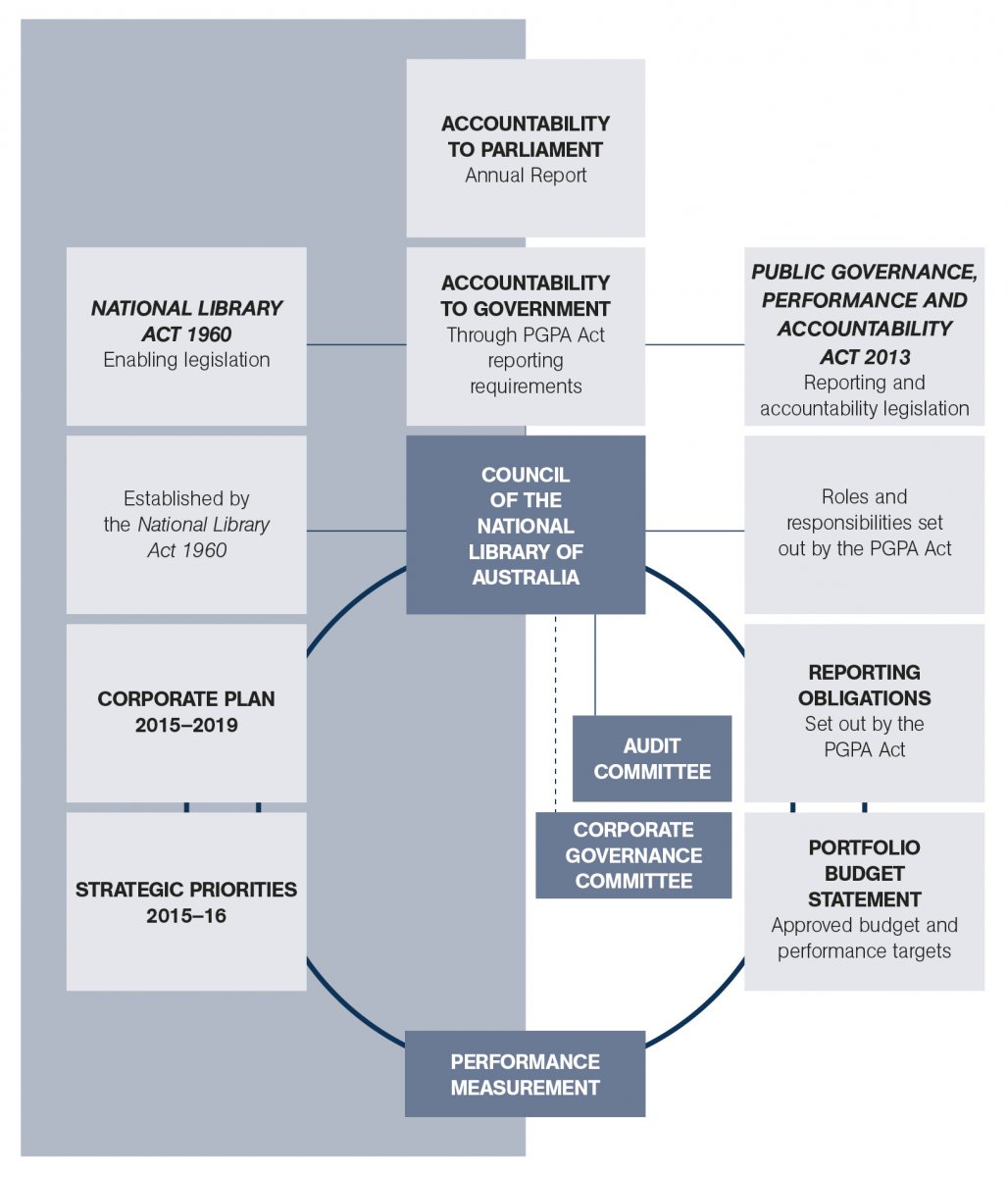 The National Library Act 1960 provides that a council shall conduct
the affairs of the Library. Council has 12 members, including the
Director-General, one senator elected by the Senate and one member
of the House of Representatives elected by the House.

At 30 June 2016, there was one vacancy on Council. Appendix A lists Council members and their attendance at Council meetings.

In 2015–16, in addition to general administrative, compliance and
financial matters, Council considered a range of matters, including:

Council has two advisory committees: the Audit Committee and the Corporate Governance Committee.

The Audit Committee assists Council and the Director-General by independently reviewing the Library’s operations, its risk management framework and the integrity of its financial accounts.

The Library’s Audit Committee follows the best practice guidelines issued
by the Australian National Audit Office (ANAO) and reviews all internal
and external reports relating to the Library. External observers at Audit Committee meetings included representatives from the ANAO and the Library’s internal auditor.

Details of Audit Committee members, meeting attendance and Terms of Reference can be found at Appendix A.

The Corporate Management Group (CMG), consisting of the Director-General and the six Senior Executive Service staff, provides strategic and operational leadership for the Library. In particular, it monitors the achievement of objectives and strategies, oversees budget matters, develops policy, coordinates activities across the organisation and oversees a range of operational issues. CMG meets weekly.

The Library is committed to the prevention of fraud and promotes a culture that encourages rigorous risk assessment and informed risk taking, and that anticipates risk in achieving objectives.

Fraud prevention, detection, investigation, reporting and data collection procedures are in place. These, along with the Fraud Risk Assessment and Fraud Control Plan, meet the Library’s needs and comply with Commonwealth Fraud Control Guidelines.

Risk management within the Library is overseen by the Emergency Planning Committee, which is chaired by the Assistant Director-General, Corporate Services, and includes Senior Executive Service staff representing all business areas. The committee provides a clear control structure to identify, monitor, respond to and mitigate risks that may affect the Library.

Council, the Audit Committee and CMG actively engage with emerging risks and manage identified strategic risks. The Audit Committee provides independent advice and assurance to Council and the Director-General on our control frameworks.

Every 6 to 12 months, the Library reviews risks at a strategic and operational level, including Work, Health and Safety, Information Technology and Fraud.

The Library is required to examine and update its Fraud Risk Assessment and Fraud Control Plan every two years; this review was completed in 2014–15. In accordance with the Library’s Fraud Management Policy, staff must be aware of their responsibilities in relation to fraud against the Commonwealth. Fraud awareness training is required to be undertaken by all Library staff and, during 2015–16, training sessions were made available through an online program to new staff and to staff who had not attended such training in the past four years.

During 2015–16, the Library made no submissions to Parliamentary Committees or Government Inquiries.

Under subsection 22(1) of the PGPA Act, the Minister for Finance (Finance Minister) may make a government policy order that specifies a policy of the Australian Government that is to apply in relation to any or all corporate Commonwealth entities, including the Library, provided the Finance Minister is satisfied that the Minister responsible for the policy has consulted the entity on the application of the policy.

On 24 February, the Finance Secretary, under subsection 36(3) of the PGPA Act, issued a Direction setting out minimum mandatory requirements for reporting performance information in the Portfolio Budget Statements from 2016–17.

In 2015–16, there were no significant issues relating to non-compliance with the financial law relating to the Library.

There were no legal claims made against or by the Library in 2015–16.

During 2015–16, the Commonwealth Ombudsman did not advise referral of any issues relating to the Library.

During 2015–16, one public interest disclosure was received.

The Library received seven Freedom of Information (FOI) requests in 2015–16.

Agencies subject to the Freedom of Information Act 1982 (FOI Act) are required to publish information to the public as part of the Information Publication Scheme (IPS). This requirement is in Part II of the FOI Act and has replaced the former requirement to publish a section 8 statement in the annual report. Each agency must display a plan on its website showing what information it publishes in accordance with the IPS requirements.

The Library’s IPS plan is on the Library website at www.nla.gov.au.

The Library was once again a high-performing agency in the 2015 Comcover risk management benchmarking survey. It rated higher than the average result across the total population, and higher than the 21 like agencies across the nine risk elements identified by Comcover. Under the terms of the insurance schedule of cover, the Library may not disclose its insurance premium price.

The Library participated in the Insurance and Risk Management Corporate Insurance Forum of cultural agencies, which holds regular meetings with Comcover to discuss insurance issues.

The Library promotes and endorses the ethical behaviour of its employees by informing staff of their responsibilities. The Library utilises a mandatory online training module on fraud and ethics, which includes details of Australian Public Service (APS) employee responsibilities as well as ethical scenarios and examples of workplace fraud. All new staff are required to complete the module on commencement and existing staff complete the program at regular intervals.

Awareness of APS Values and the APS Code of Conduct is also achieved through:

The Library implemented a Rehabilitation Management System Policy and an Early Intervention and Rehabilitation Procedure in consultation with Comcare.

Management and staff discussed work health and safety management arrangements at quarterly meetings of the Work Health and Safety and First Aid committees.

The Australian Public Service Commission provides the Library with data from the 2015 State of the Service employee survey, which received a 56 per cent response rate. Library employees’ views on safety culture rated positively when compared against the APS average. Staff either agreed or strongly agreed with the following statements: the people in my work group are committed to workplace safety (90 per cent); my supervisor is committed to workplace safety (91 per cent); my agency genuinely cares about employees being healthy and safe at work (79 per cent); and my agency supports employees who are injured or become ill due to work (82 per cent).

Under the Work Health and Safety Act 2011, as at 30 June 2016, there were no notifications, directions or notices issued to the Library during the reporting period.

During 2015–16, there were four claims lodged for workers’ compensation, and of these three were accepted and one was disallowed. The Library’s premium rates for injuries over the past three years are shown in Table 2.1.

Table 2.1: Premiums for Injuries Suffered, 2013–17
(as a percentage of wages and salaries)

*Including as amended retrospectively by Comcare.

Advertising and market research in excess of $12,700 for non-recruitment and non-tender services amounted to $142,266 (inclusive of GST).