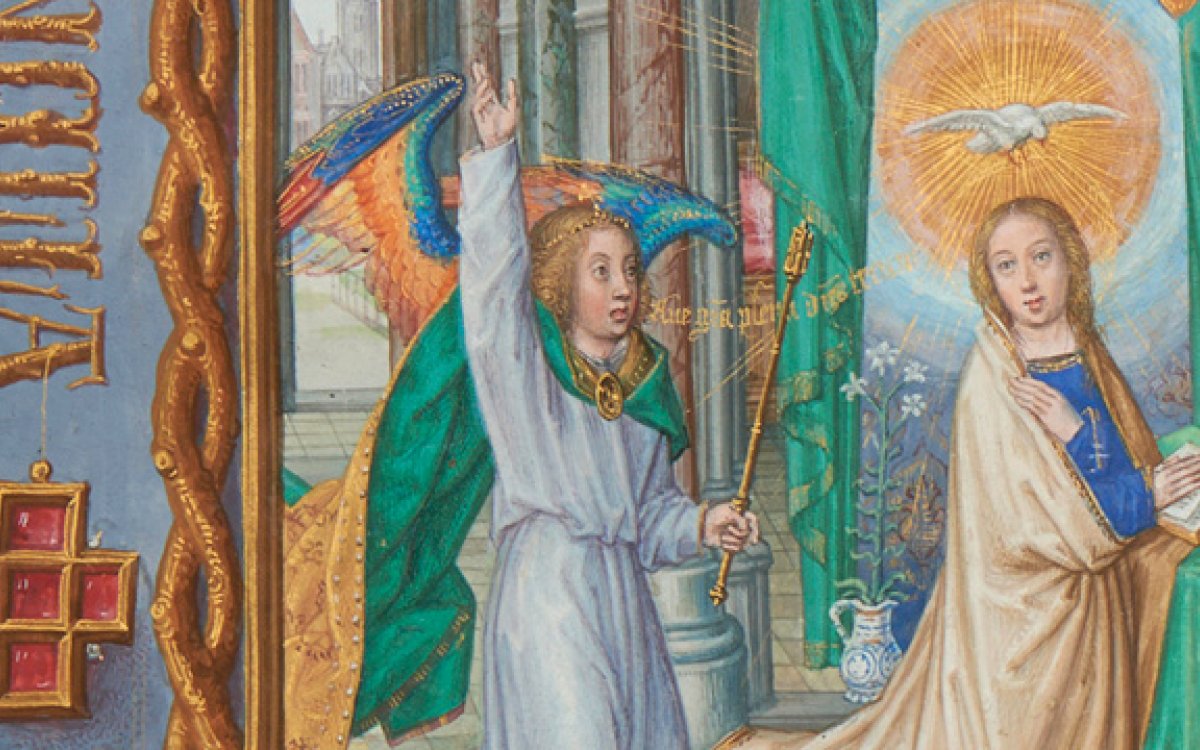 The Annunciation and the Beginning of Matins (detail), fols 84v in the Rothschild Prayer Book c. 1505–1510, Kerry Stokes Collection, Perth

In an Australian first, the Rothschild Prayer Book, considered to be one of the most remarkable books in the world, has gone on display at the National Library of Australia in Canberra.

A celebrated masterpiece of Renaissance art, the lavishly illuminated manuscript was bought last year at auction in New York by Australian businessman Mr Kerry Stokes AC, for $A15.5 million—making it one of the world's most expensive and precious books.

It is now on show in Revealing the Rothschild Prayer Book c.1505–1510 from the Kerry Stokes Collection, housed in a temperature-controlled, state-of-the-art bespoke showcase in the National Library’s Treasures Gallery for a strictly limited time.

Senator the Hon George Brandis, QC, Attorney-General and Minister for the Arts said the National Library is one of our cultural treasures, and it is a great privilege to have the opportunity to see this priceless piece of history on display here in Australia.

'The generosity of Mr Kerry Stokes has made it possible for this remarkable treasure to go on show for all Australians to see at the National Library. Mr Stokes is a great Australian and a great arts philanthropist,' Senator Brandis said.

Director-General of the National Library of Australia, Ms Anne-Marie Schwirtlich, said the Library was honoured to play host to such a significant piece of world history.

‘To think it was lost for more than 300 years, only to be bought by one of the most famous banking families in the world, the Rothschilds, then reportedly looted by the Nazis and hidden in an Austrian salt mine. Add to this the fact it’s regarded as one of the most beautiful books in the world—it really doesn’t get much better than this,’ Ms Schwirtlich said.

The Rothschild Prayer Book, a book of hours created for private devotion, features 67 full-page miniature paintings, each a masterpiece in itself. It includes portraits of popular saints as well as everyday men, women and children, flowers, birds and insects of the time with stunning borders of gold.

More than 20 of the National Library’s own rare medieval and Renaissance treasures are also on show to complement the Rothschild Prayer Book. This display coincides with the success of a public fundraising appeal to digitise, conserve and research the National Library’s early manuscript treasures. See the Library’s behind-the-scenes video https://www.youtube.com/watch?v=lZnW7PqBvV0.

Revealing the Rothschild Prayer Book c.1505–1510 from the Kerry Stokes Collection is on display in the National Library’s Treasures Gallery from 22 May to 9 August 2015. Free admission.

High-res images are available at https://www.nla.gov.au/news/media-kits