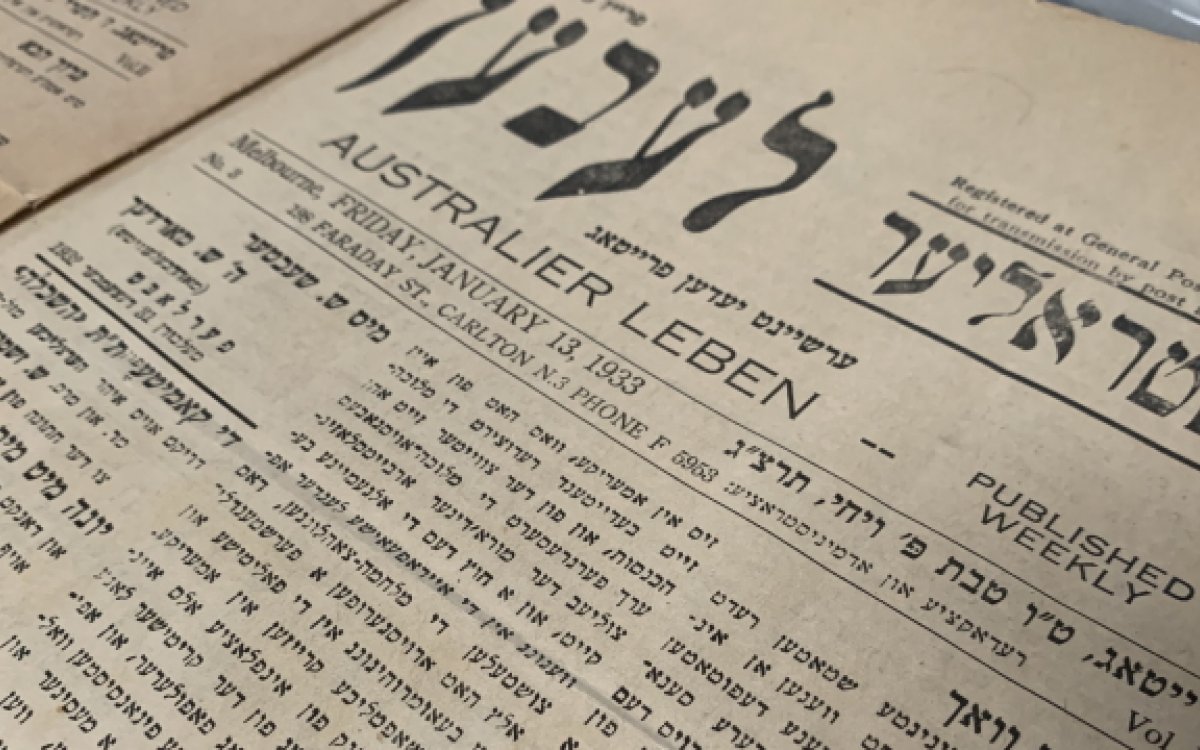 The history of Jewish press in Australia goes back to 1842, when, despite the very small Jewish population, a local edition of the London-based Voice of Jacob (what would later become The Jewish Chronicle) was published in Sydney. As the local communities grew and established themselves in the twentieth century, the number of publications and their variety grew immensely. Most of the publications were in English, but there were also some in Yiddish and Hebrew.

This joint initiative would not have been made possible without financial assistance from philanthropic supporters, including the David Lesnie Foundation, the Embassy of Israel in Australia, the Besen Family Foundation, and Eitan Neishlos and Lee Levi.

Dr. Marie-Louise Ayres, Director-General of the National Library of Australia: "The project continues the work being done by the National Library to connect culturally and linguistically diverse communities with their history. This global initiative supports international scholarship and enables those interested in the study of Jewry in Australia to freely access this wealth of information. The National Library’s unparalleled digitisation capabilities will once again unlock important sources for researchers and enable generations to connect with the treasured voices, stories and opinions of the people from their collective past."

Peter Philippsohn OAM, President of the Australian Jewish Historical Society: "Jewish people have been in Australia since 1788 and, while prominent members of our community such as Sir John Monash are well known, the history of those who came before him remains largely unknown. From a Jewish community standpoint, these newspapers represent a rich source of contemporary history and to have access to the information for historians, genealogists and interested members of the public is immense. It’s not just about uncovering genealogical information and family history either, but revealing the arcane and the attitudes of society at a particular moment in time—the insights that can be gleaned from the community's attitudes towards immigration, the Holocaust, and the World Wars."

David Redman, Chief Executive Officer of Polaris Media: “With a history that extends over 125 years, the Australian Jewish News has been an important part of not only the Jewish community but also the wider Australian community. Polaris Media, as the publisher of The Australian Jewish News, is very excited to be part of this project to preserve this history as well as make this unique record of our past available digitally to future generations.”

Document
Download a PDF copy of the media release (231.48 KB)

The National Library of Australia

The National Library is charged with preserving the nation’s memory for future generations. The NLA is committed to connecting with communities, and connecting communities with their national collections. While the Library’s mission has long been to collect, connect and collaborate, the ways in which we have carried out that mission have changed dramatically. The digital era has seen creative and research practices, knowledge production and community expectations being fundamentally reshaped through the opportunities, new technologies offer. The Library has responded to and anticipated these changes, building an astounding collection, developing world-leading digital platforms, connecting with more Australians than ever before, and collaborating with other agencies to develop digital research infrastructure on which the nation relies. We are committed to continuing this proud record of service to the Australian people.

Trove is a collaboration between the National Library of Australia and hundreds of Partner organisations around Australia.

The National Library of Israel

Founded in Jerusalem in 1892, the National Library of Israel (NLI) serves as the vibrant institution of national memory for the Jewish people worldwide and Israelis of all backgrounds and faiths. NLI has recently embarked upon an ambitious journey of renewal and is now opening access and encouraging meaningful engagement with the treasures of Jewish and Israeli culture as never before through a range of innovative educational, cultural and digital initiatives. Its iconic new home is currently under construction adjacent to the Knesset (Israeli Parliament) in Jerusalem, on schedule to open its doors in 2022.

Alongside and in partnership with peer institutions across the globe, NLI is carrying out significant digital initiatives to open access, generate research, enhance user experience and exponentially expand the quantity and quality of materials available for user communities interested in its core subject areas. One such example is the Historical Jewish Press Project (JPress), the world's leading initiative for preserving and opening digital access to Jewish newspapers and journals across centuries and continents, allowing users to search and browse nearly 3,000,000 pages from over 400 titles in a range of languages from the late 18th through the 20th centuries. JPress is an initiative of the National Library of Israel (NLI) and Tel Aviv University (TAU), in cooperation with institutions and collections around the globe.

JPress is a collaboration between the National Library of Israel and Tel Aviv University.

Founded in August 1938 by Rabbi Leib Falk, Sydney Glass, Hirsch Munz and Percy Marks, the Australian Jewish Historical Society is dedicated to promoting the study of Jewry in Australia from 1788. Since its founding the Society has sought to compile and make available unique and authentic records relating to the Jewish people in Australia, New Zealand and the Pacific Islands via the acquisition and preservation of historically significant documents and materials. Equally, the Society has pursued the conservation of places of Jewish interest and continues to foster the interchange of information through lectures, discussions and exhibitions of historical interest or value.

The Society is now working to make a range of materials available online.