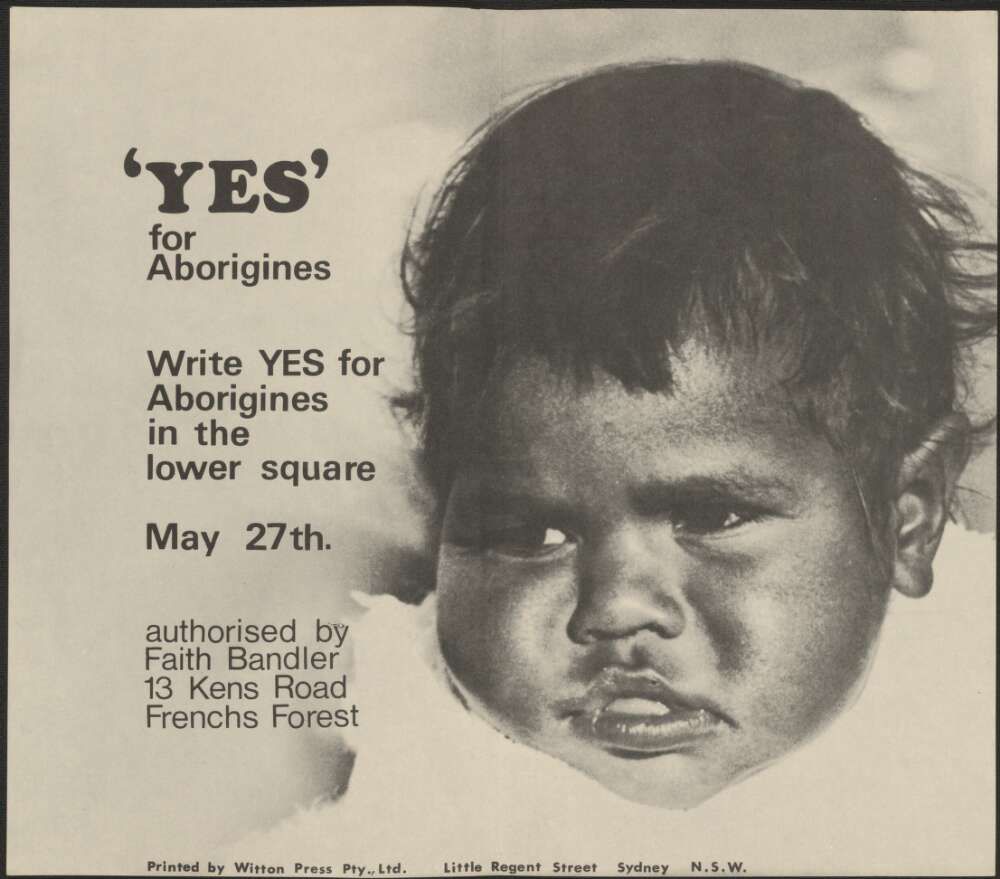 Bring learning to life at the Royal Botanic Gardens, Sydney, Mount Annan Botanic Garden and Mount Tomah Botanic Garden [Sydney : Botanic Gardens Trust, 2007 , ©2007]
Poster promoting educational excursions for children from 5 to 12 years. Features a photograph of nine children in school uniforms, standing amongst native flora. "Join us in acknowledging and reflecting on the 50th annivesary of NAIDOC -'Looking Forward, Looking Blak', the 40th anniversary of the 1967 Referendum that allowed Australian Aboriginals to be recognised as citizens in their own country and the 10th anniversary of 'Bringing Them Home.' appears at the foot.
Advance Australia where? : National Aborigines' Day Friday, July 14, 1972 [Sydney : National Aborigines' Day Observance Committee (NAIDOC), 1972]
Poster celebrating first National Aborigines' Day observed on the 14th of July1972, after the Department of Aboriginal Affairs was formed as a major outcome of the 1967 Referendum.
Chains or change [picture] : National Aborigines Day 8th July 1977 / issued by the National Aborigines' Day Observance Committee [Sydney : National Aborigines' Day Observance Committee, 1977]
A red, black, yellow and white poster designed to appear like the Aboriginal Australian flag. The yellow circle at the centre of the poster features the face of an Indigenous man wearing a chain around his neck, and is enclosed by a large white question mark. At footer of poster: "1967: Referendum. 1977: where is justice - land - compensation - dignity? Queensland discrimanatory acts still exist. U.N year to end discrimination."
1967 - 1997 the people's movement towards reconcilliation : by Eubena Nampitjin [Melbourne : Council for Aboriginal Reconcilliation, 1997].
A poster reproducing a painting by Indigenous artist Eubena Nampitjun, which features pinks, reds, oranges and yellows in a dot style. Painting is set against a pale green background with a calendar for 1997 running down the left side. Titles at foot. Caption title states: "Thirty years ago, Australians came together to support an historic referendum on Indigenous rights. In 1997, we are coming together for the Australian Reconciliation Convention".
Celebrating the 30th anniversary of the 1967 referendum, NAIDOC Week 6-13 July 1997 [picture] / Eleanor Binge [Canberra: National Aborigines and Islanders Day Observance Committee, 1997].
NAIDOC celebrations are held around Australia in the first full week in July to celebrate the history, culture and achievements of Aboriginal and Torres Strait Islander people. NAIDOC originally stood for National Aborigines and Islanders Day Observance Committee. This committee was once responsible for organising national activities during NAIDOC Week, and its acronym has become the name of the week itself.