As the National Library launches its appeal to preserve and digitise some 7,000 pre-1950 posters held in the Pictures Collection, Emeritus Professor and author Peter Spearritt explores some alluring posters from the Library’s collection, produced to capture the minds of national and international audiences. Support our posters appeal and help us preserve these fragile artefacts and provide free online access to them for all to study and enjoy. The appeal closes on 31 July 2019.

At a moment in history where we are being flooded with ephemeral photographs distributed via the internet, it is reassuring to delve back into an era where advertising imagery–for products or travel–was created by talented graphic artists. Fortunately, many of these images have survived. Some, especially silk-screen travel posters and pub paintings on glass, have become collectors’ items. Others, including the flying kangaroo logo designed by Gert Sellheim for Qantas, are so ubiquitous they became iconic, to both Australia and the world. 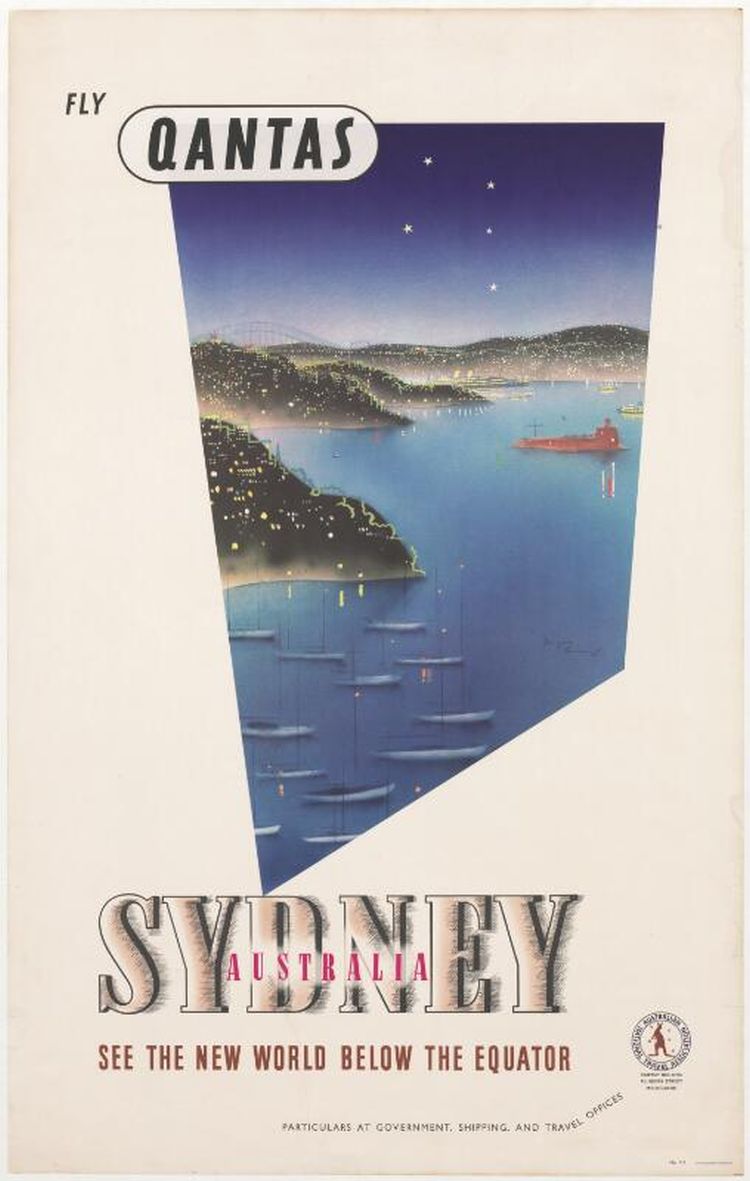 Over many decades the National Library has been collecting such items, whether they promote beer, Bex or Bushells tea. Building such a collection requires assiduous purchasing - scanning auction and sale catalogues, more recently online sites, as well as recognising the importance of donations. Such potentially ephemeral items, usually on paper, are often thrown out, especially when relatives wonder what to do with what many see as the detritus of a deceased estate. 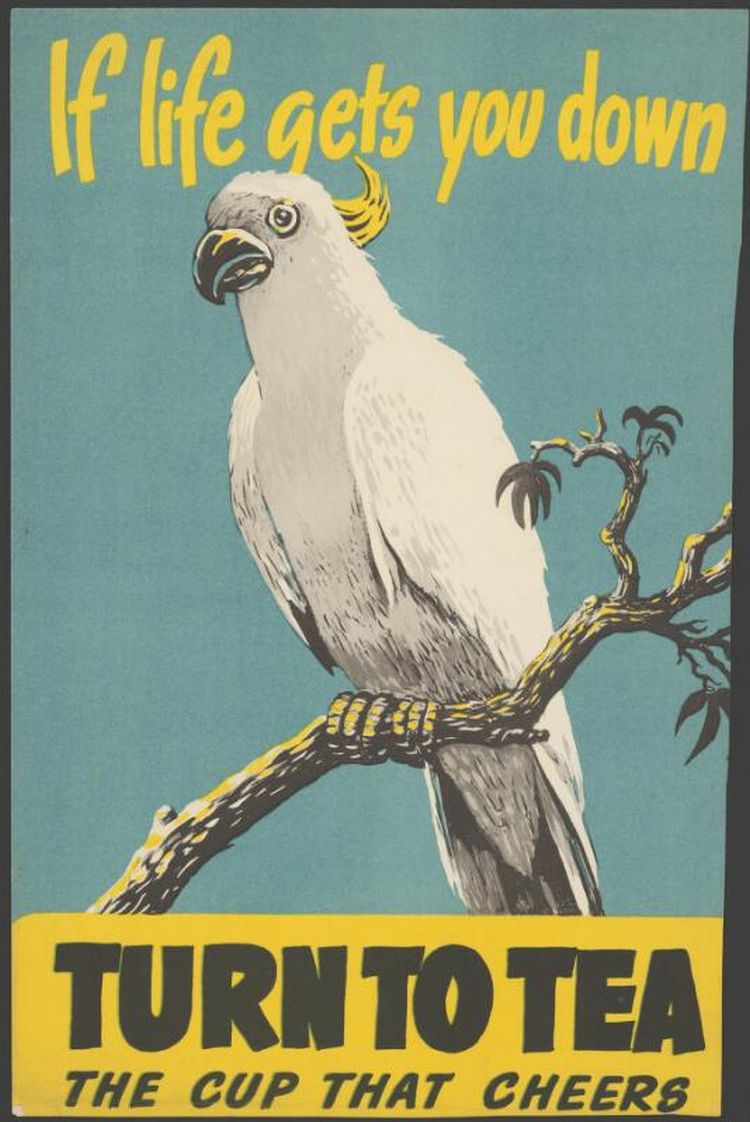 Even businesses who commission such works make mistakes. Many don’t take the advertising component of their corporate history seriously. We are lucky that some firms – including Coles, David Jones and what is now Westpac – have retained good archives. But when a firm literally disappears from both the physical and the graphical landscape, most notably Holden and Ansett, much of their history disappears. Lack of historical foresight plays a part in this. When Murray Views in Gympie, one of the Australia’s largest postcard companies, transferred to its new headquarters on the outskirts of town in the 1970s, hundreds of thousands of black and white photographs on which their postcards were based, went to the tip. Their accountants now weep over this, at least for the lost cash value, if not the heritage significance.

Whether your primary interest is in art and design, in cooking, aviation, motor cars, or travel, the Library’s poster collection has something for you. The most prolific graphic artists worked for a wide range of companies. Percy Trompf designed chocolate boxes, apple labels and travel posters  including a striking representation of the Sydney Harbour Bridge, with the marvellous caption ‘Still Building Australia’. But Trompf is best known in the international collectors market for his posters for Canadian Pacific Railways, even though he never stepped foot outside Australia, apart from war service in New Guinea. British born Eileen Mayo, a botanical illustrator, produced memorable images of our flora and fauna, while James Northfield captured an Australia which really did ride on the sheeps’ back. Gert Sellheim, born in Estonia, created abstract representations of our surf culture, and employed Indigenous motifs to startling effect, at a time when such images were all but ignored. 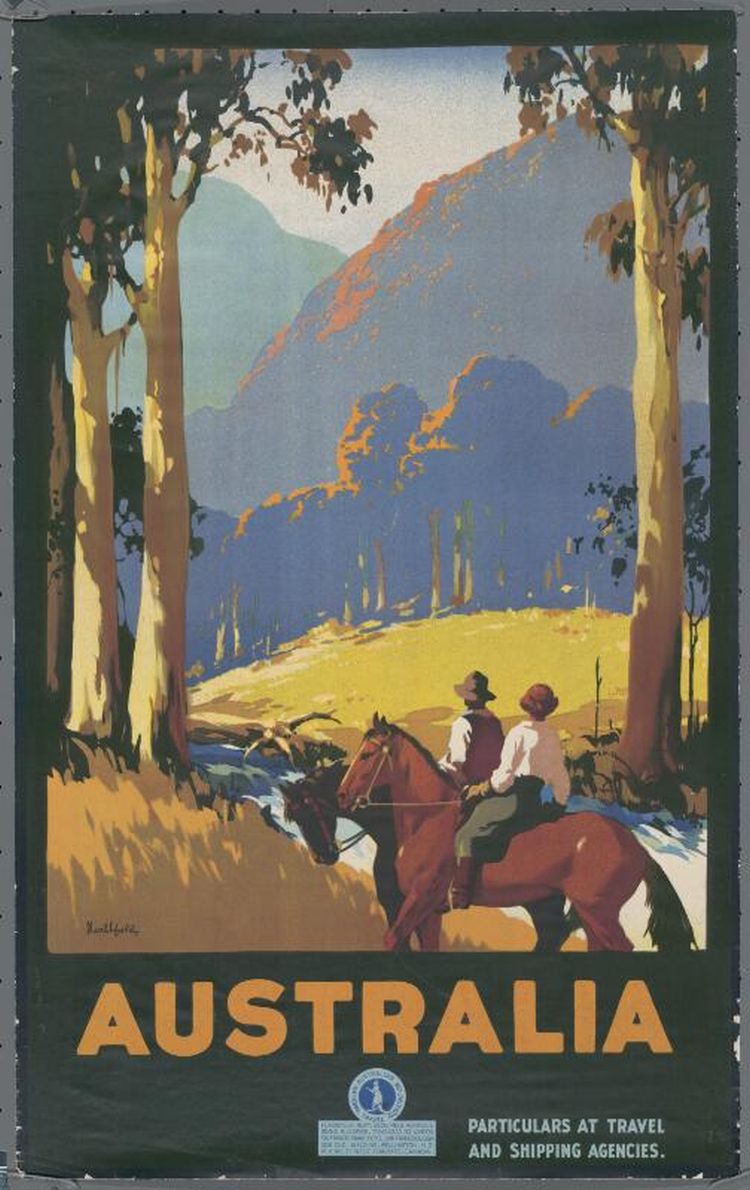 While collectors are still discovering important items not yet held in public collections, the National Library’s collection provides an extraordinary window into the products, places and imagery of our shared past.

Peter Spearritt has been a keen user of the NLAs pictorial collections for many years. The results can be seen in some of the key illustration in Gammage and Spearritt eds., Australians 1938 (1987), in Davidson and Spearritt, Holiday Business: tourism in Australia since 1870 (2000) and in Where History Happened: the hidden past of Australia’s towns and places, published by the National Library last year. He has written entries on the great interwar graphic designers, Gert Sellheim, Percy Trompf and James Northfield for the Australian Dictionary of Biography.