An encounter with John Verge

Part of my job is cataloguing rare books at the National Library of Australia. Only a few cataloguers get a chance to handle rare books. I never know what my next item will be, which makes it very exciting. This gives me a chance to learn something new on many subjects (elephants, circuses, architects), or about the author. When I catalogue I give my books a chance to rest on my book pillows (small or large) while I work till my record is completed. I get excited when I get books with the olde English in them or the beautiful leather bindings, gold leaf decorations or marbled endpapers—huge sigh! Modern books tend to lack these beautiful details.

Sometimes we come across books that were poorly catalogued in the past with only very brief records and occasionally inaccurate information, or even with no catalogue records at all. Recently a book was sent up from our stacks with a big blue flag in it “No record on catalogue”. It was my job to fix this. We call this “catalogue maintenance” and it is part of our everyday work in ensuring the best possible access to our national collection.

So, 'easily fixed', I thought. The title of the book is An arrangement of the psalms, hymns and spiritual songs, of the Rev. Isaac Watts, D.D. and it was published in several editions and reprints by publishers in both the UK and US during the first half of the nineteenth century. I searched for a record for the edition I had on our shared cataloguing database Trove/Libraries Australia and also the international database OCLC. However I could not find a record for that particular edition on any database, so I had to create one based on the information on the book I had in hand. Since the publication date wasn’t printed on the book—just the edition number—I had to use other means to try and determine the date. Now here is the part that I love best—the cataloguer as investigator. It can often lead down unexpected pathways.

Firstly, there was a signature in the book from the original owner that was helpfully dated 1814 which led me to guess it was published just before this. Looking at the dates of other editions this seemed to be a reasonable assumption so I put [1813?] on the record (this is cataloguer format for an informed guess).

But there was a second mystery—why was the book located in our Australian rare book collection when it was published overseas? Was this an error? Should I put it in the Overseas Rare Book stack? My manager suggested that I research the person who had signed my book in 1814 as this might provide a clue as to why it had been put it into our Australian collection.

The first free page was signed J. Verge 1814. Who was this person? 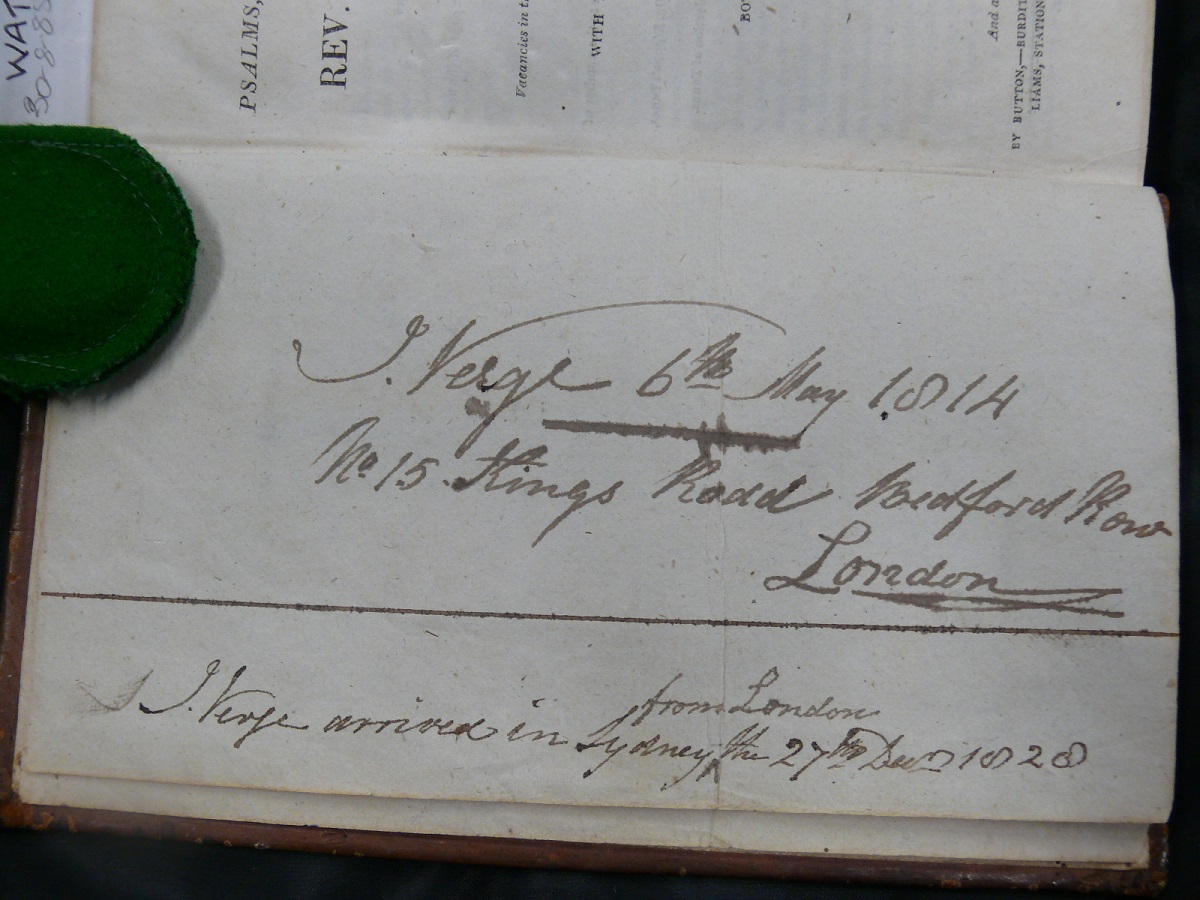 It turns out J. Verge was John Verge, an English architect who migrated to Australia and became very successful in the 1830s, known then as the Golden 30s. I was able to confirm it was his book, because on the second page he had written his address in London and then below, “J. Verge arrived in Sydney on 14th December 27, 1828”. Have you ever seen an 8 written on its side? Well John wrote his eights that way.  I found an example in one of his ledgers, reproduced on page 127 in the Golden decade of Australian Architecture: the work of John Verge.

The arrival date in my book matched with the entry on the Australian Dictionary of Biography for the arrival date of John Verge in Sydney. “He sailed from London in the Clarkstone and arrived at Port Jackson on 27 December 1828 with his son, a shepherd, a flock of Hampshire sheep, various supplies and agricultural equipment; with his capital these assets amounted in value to £2738.”

So, this was the reason the book was located in our Australian rare book collection. It wasn’t the book itself, but the inscription from the owner that made it special and gave it the Australian connection. My short lived but sweet eureka moment.

John Verge practised in Sydney between 1830 and 1837 and he was first invited by the Governor (Sir) Ralph Darling to tender for government contracts. His clients often ranged from the who's who of Sydney’s early colony and shopkeepers and men of business.

An original ledger of John Verge is held at the State Library of New South Wales, a very unique book as many architects did not keep detailed records of their work. Lucky for us this one still exists.

According to Harley Preston’s entry in the Australian Dictionary of Biography, Verge's masterpiece is Camden Park, Camden, designed for John Macarthur in 1831-1832 and built in 1832-1835 under Verge's supervision for his son William (there are some discreet, harmonious additions). 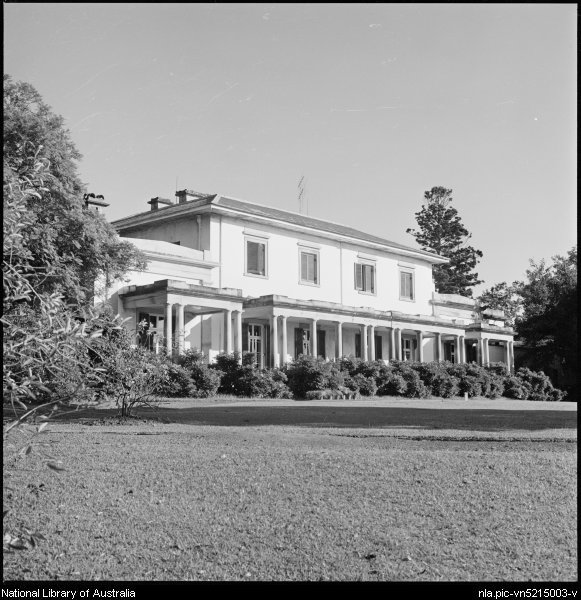 Verge is also responsible for the interior of Elizabeth Bay House, which according to Preston has one of the richest and most spatially dramatic interiors in early Australian colonial architecture. Elizabeth Bay House (exterior somewhat altered) was designed in 1833, and built in 1835-1837 for Alexander McLeay, the colonial secretary, a notable house which, with its former spacious ornamental grounds, was much praised.

We are fortunate that we can still visit Elizabeth Bay House and marvel at the beautiful staircase or perhaps go down to the cellars on a hot sticky Sydney day. 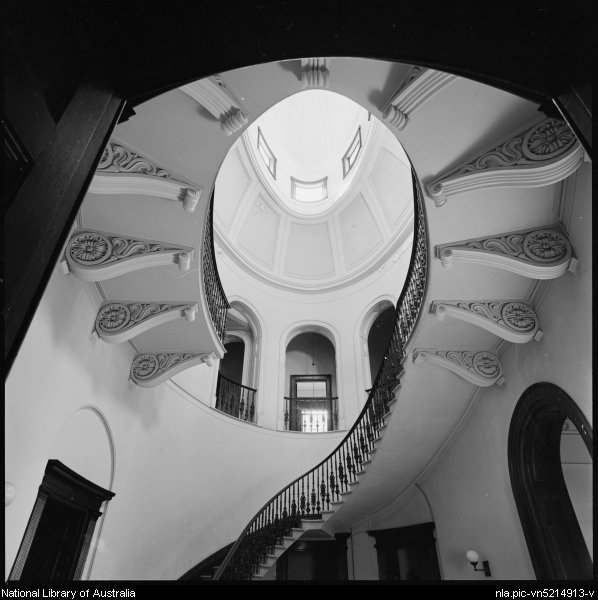 What I found interesting is that there is a John Verge Award for Interior Architecture awarded annually by the Australian Institute of Architects NSW. And the headquarters for the NSW Branch in Potts Point is at `Tusculum’ designed by John Verge and is an example of the mansions that once dominated the area.

John Verge only practised as an architect in the 1830s and 1840s before retiring a second time, and settling in the country. He died at the age of 87 in 1861.

Well now my book has gone back to the Australian rare books stack and is now findable in our catalogue with my extra note for the inscription.