Tour the National Library and see a world in stones 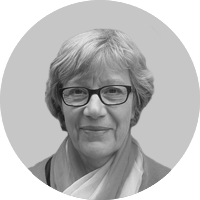 When you walk into the foyer of the National Library of Australia you will see:

As a volunteer at the National Library, I regularly walk through the foyer and see this array of beautiful stones. With my colleague volunteers taking Discovery and Behind-The-Scenes tours, we talk about the marbles and tell a story of the old white stone from the library that once was in Athens. So, perhaps it is not surprising that I should have decided to try on a visit to Athens, to find whatever remains of the Library of Pantainos, from which the stone in the National Library has come.

There is ample information available on Wikipedia and in National Library publications to indicate where in the ancient Agora of Athens, the Library of Pantainos was located, and I used these to find the ruins. Beside the ruins of areas an explanatory board, shown below,  which shows the location of the Library within the agora.

The long redbrick building is the Stoa of Attalos and the building just below marked with a small three, is the Library of Pantainos. The long road marked with a small two is the Panathenaic Way, which still  leads through the agora to the Acropolis. Missing from this second-century layout of the agora is the nineteenth-century railway line that runs from Monastiraki to Piraeus. If it were shown, it would be at the top of the diagram, cutting below the Panathenaic Way. Today if one walks from Monastiraki over the railway line, onto the Panathenaic Way, you will see the scene below, with the Stoa of Attalos and the Library of Pantainos behind the trees on the left. High up ahead you can see the Propylaea, the gateway to the Acropolis. 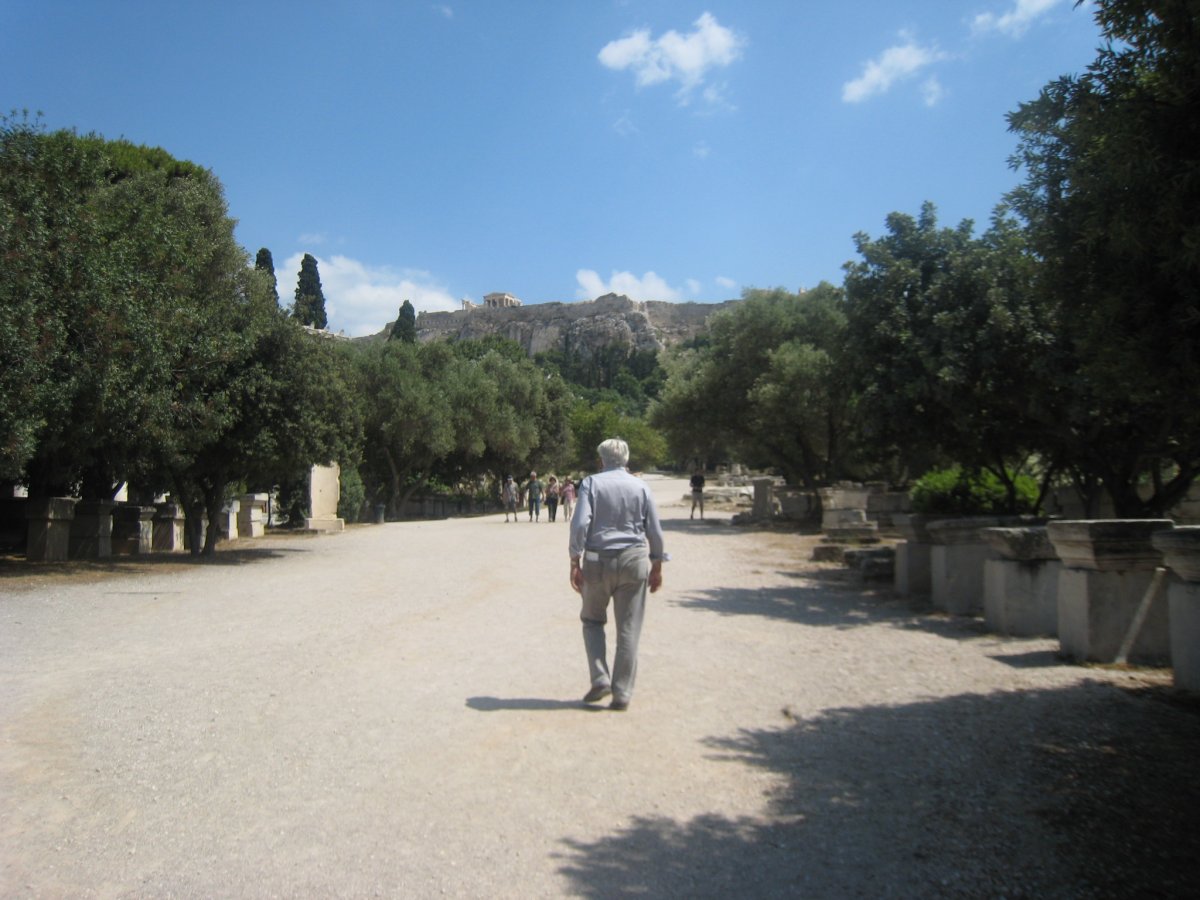 The explanatory board at the ruins of the Library of Pantainos tells the story of the donation of the library to the people of Athens and also describes its design and layout.

The Library of Pantainos is located on the east side of the Panathenaic way, south of the Stoa of Attalos. It consists of a large square room and a paved courtyard, surrounded by three stoas with shops behind their colonnades. The north stoa runs eastward, along the south side of a marble street that led in Roman times from the Agora to the Doric gateway of the market of Caesar and Augustus, also known as the Roman agora.

According to its inscribed marble lintel block the library was dedicated to Athena Archegetis, the emperor Trajan and the Athenian people in the years around AD 100, by Titus Flavious Pantainos who describes himself as a priest of the philosophical muses as well as the son of the head of a philosophical school. The library rules, much as they would be today, are preserved in another inscription found in the building: “No book is to be taken out since we have sworn the oath.  The library is to be open from the first hour until the sixth.”

Trajan seems actually to have been worshipped in the building as parts of his statue were found in the ruins. The remains of the library reinforce the opinion that we may have not only the “library of Pantainos” but also one of the famed philosophical schools of Athens.

The north and west stoas were destroyed by the Herulians in AD 267. In the AD fifth century the east stoa was rebuilt with the addition of a second storey for the eastern two-thirds of its length. The rooms at the ground level behind the colonnade were also refurnished, to serve as a basement suite for the principal rooms on the floor above, which had a small peristyle peristyle court, an apsidal room and provisions for bathing. This large building was probably an official residence.

Here is the explanatory board’s depiction of the north stoa of the Library running eastwards along the marble street to the Roman agora, followed by a picture of what remains today. 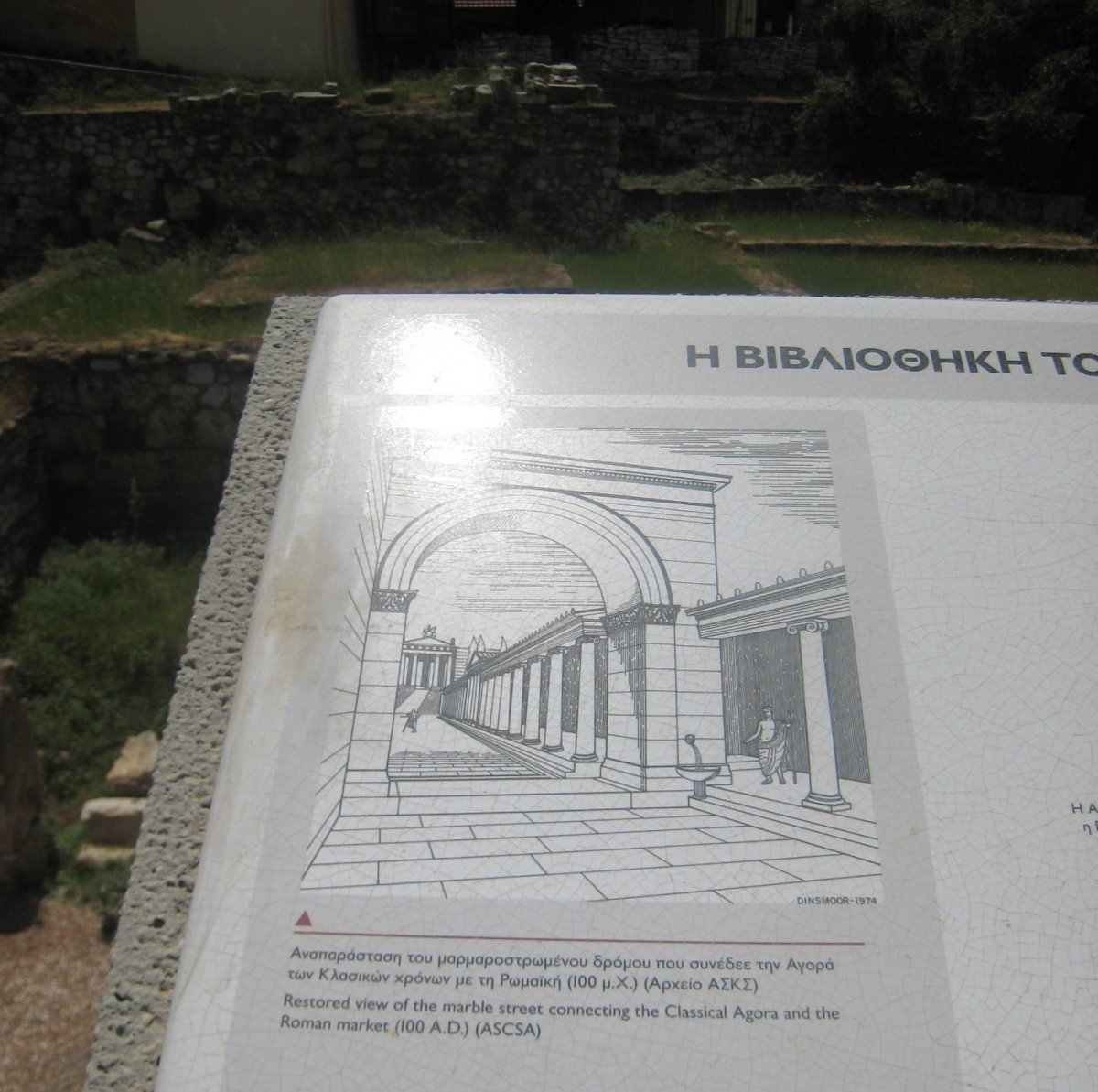 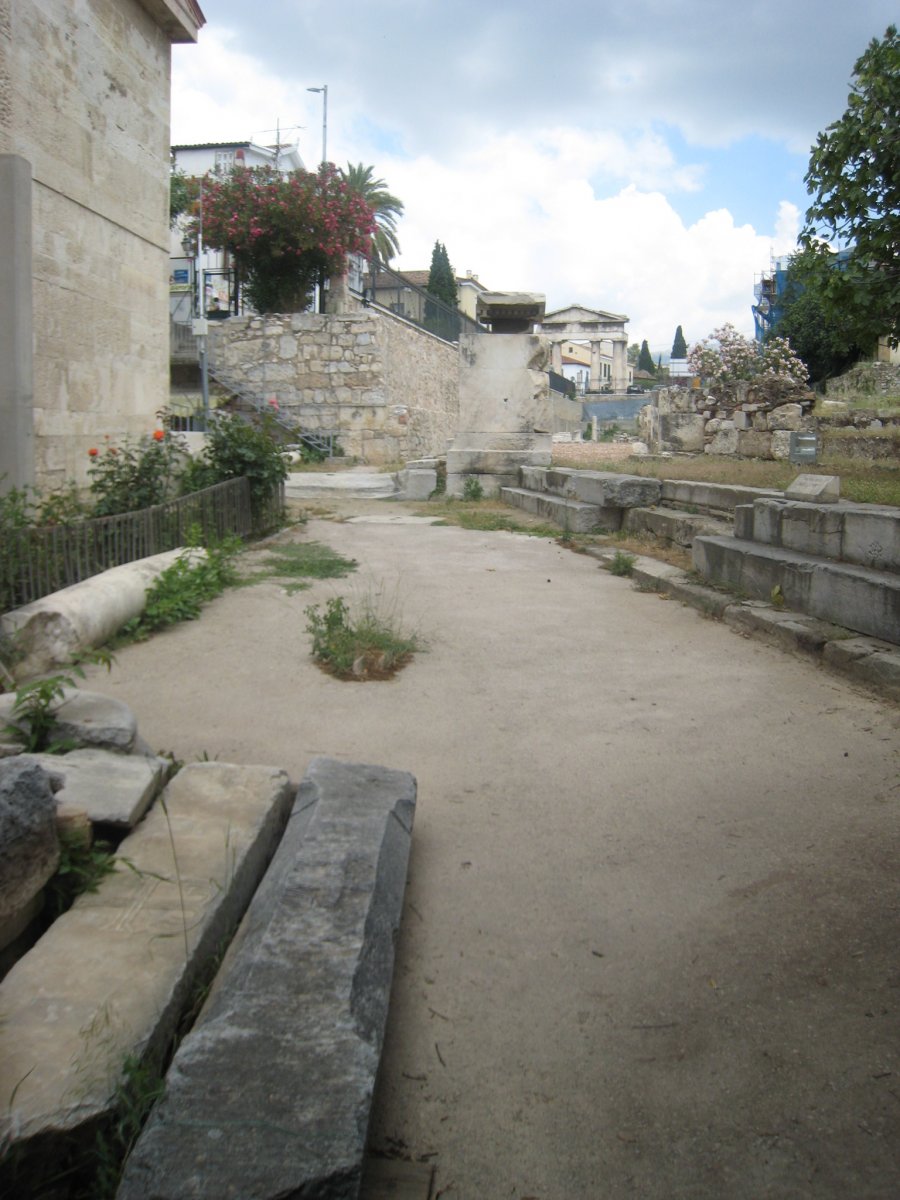 And looking back from east to west 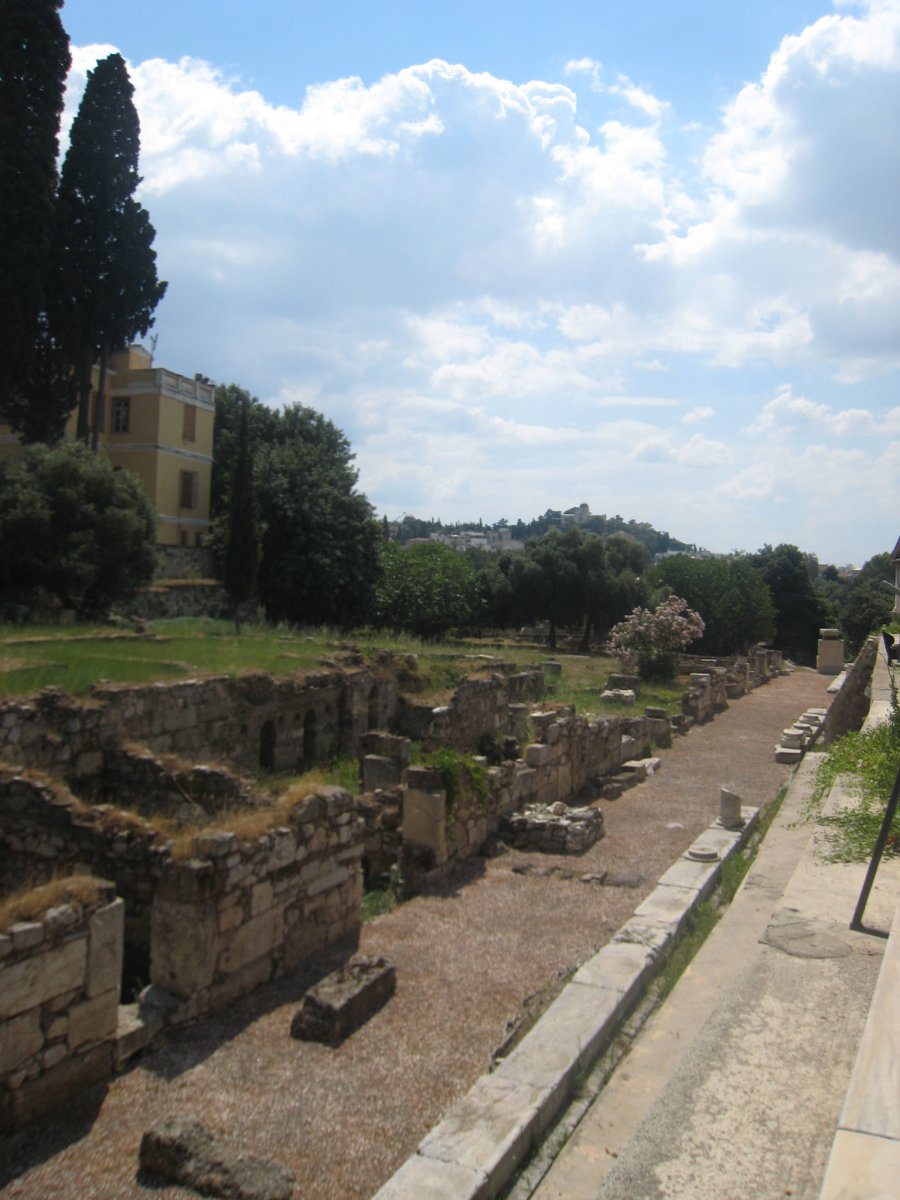 And now, housed next door to the library ruin, in the rebuilt Stoa of Attalos (museum), the rules of the Library, “written in stone” ... 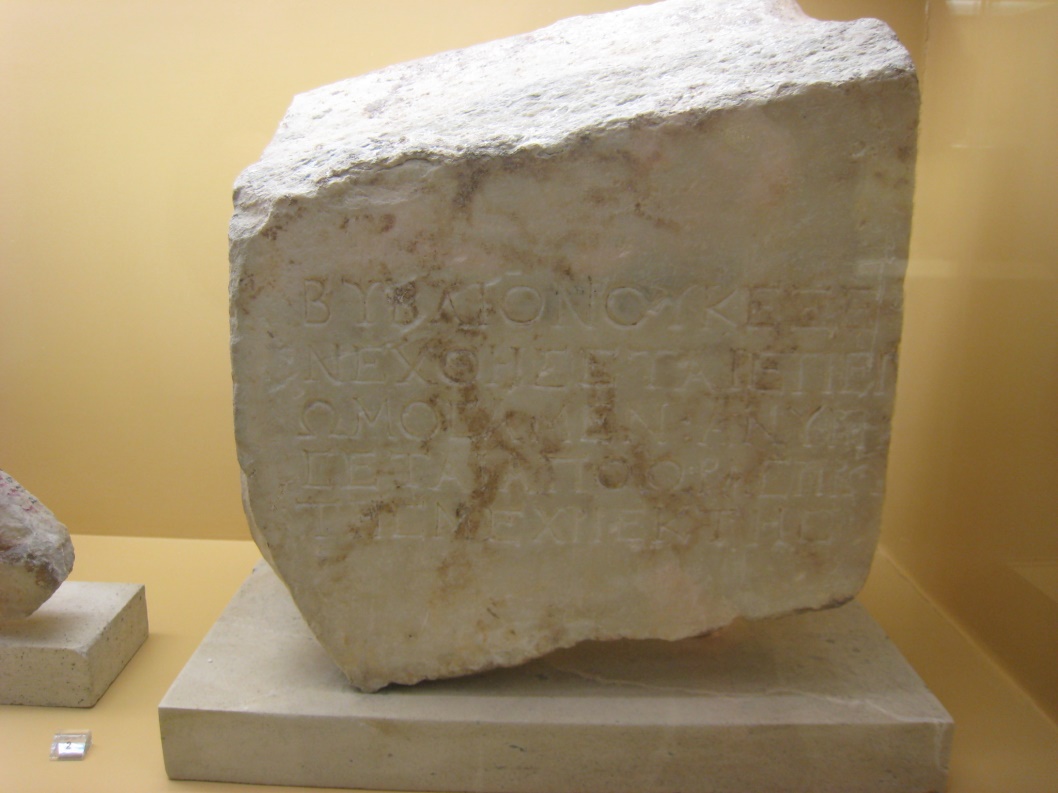 And two statues which are thought probably to have adorned the Library of Pantainos, but now are at the Stoa, the Personification of the Odyssey and the Iliad. 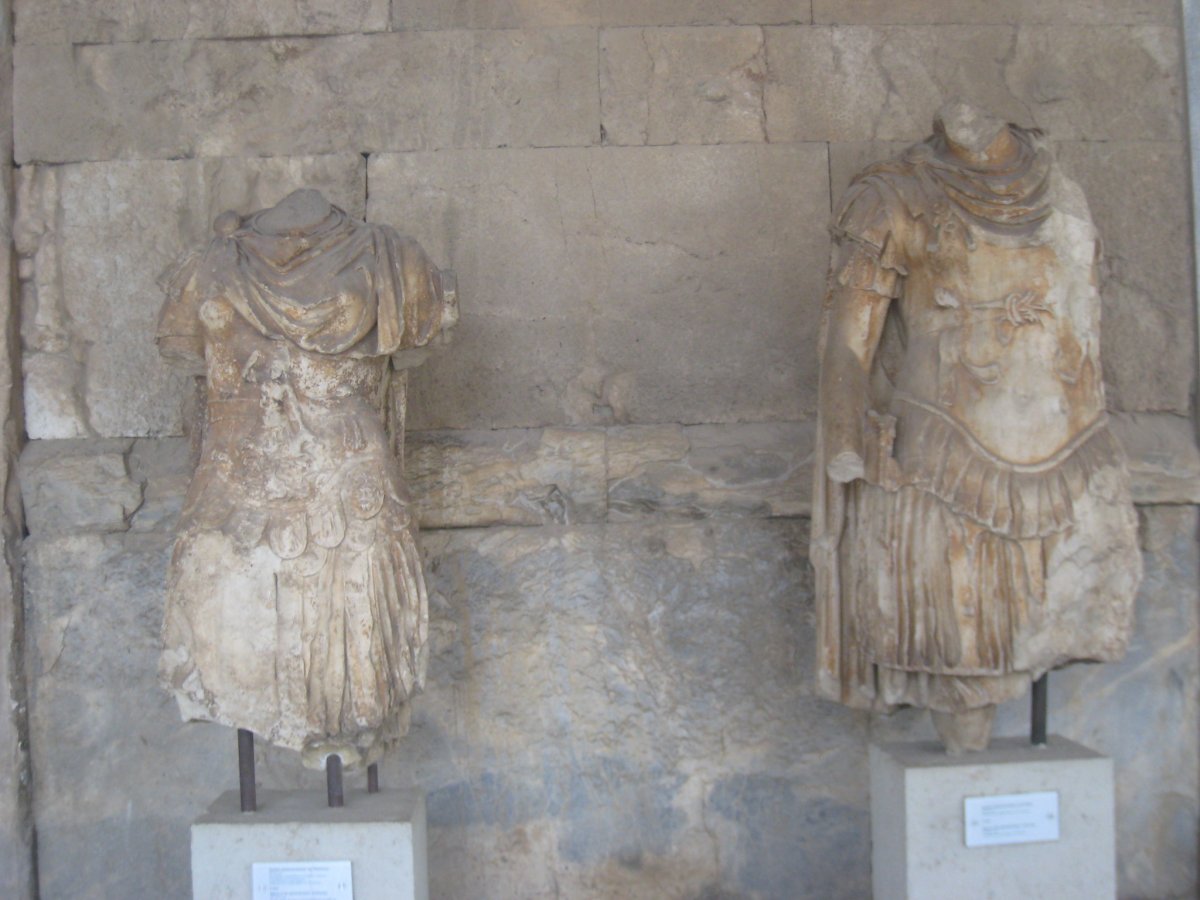 You can take a virtual tour online of Ancient Agora, from Mycenaean to Ottoman times, at http://www.ancientathens3d.com/ and you will find, in the Roman period, this 3D representation of how the Pantainos Library is thought to have looked. 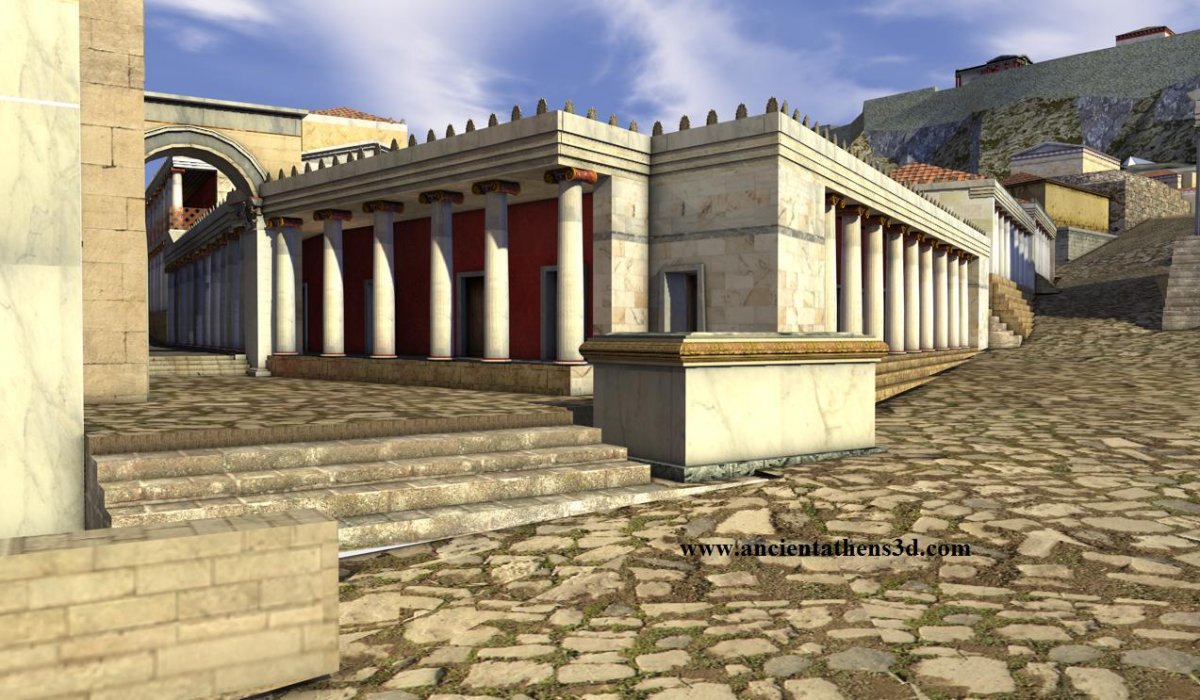 To touch the piece of stone from the Pantainos Library and hear the whispers of the library users of Athens in the second century, join one of the free Discover Your National Library tours every Saturday at 2 pm. 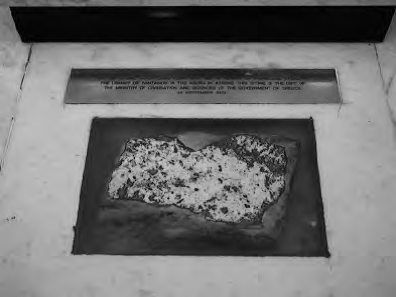 Comment:
Thank you Margaret, wonderful work.
Comment:
Thanks Margaret, Almost every time I go into the library I go up to the stone and think who might have walked on it!
Comment:
How wonderful Margaret. Thank you for pointing out the significant stone. I am on my way to Athens and will appreciate the remains of a magnificent Library
Comment:
Don't forget the rock-climbing feature around the base of the Library pedestal.
Comment:
Is there any significance to the date on the plaque, or is it the date it was put in place?