The Library’s Manuscript Collection is a veritable treasure trove for intrepid researchers to uncover new and exciting fragments of our cultural history. These treasures include rare examples of Australian currency, such as this unimposing scrap of paper dated 1812, which promises its bearer payment of ‘two shillings and sixpence’. 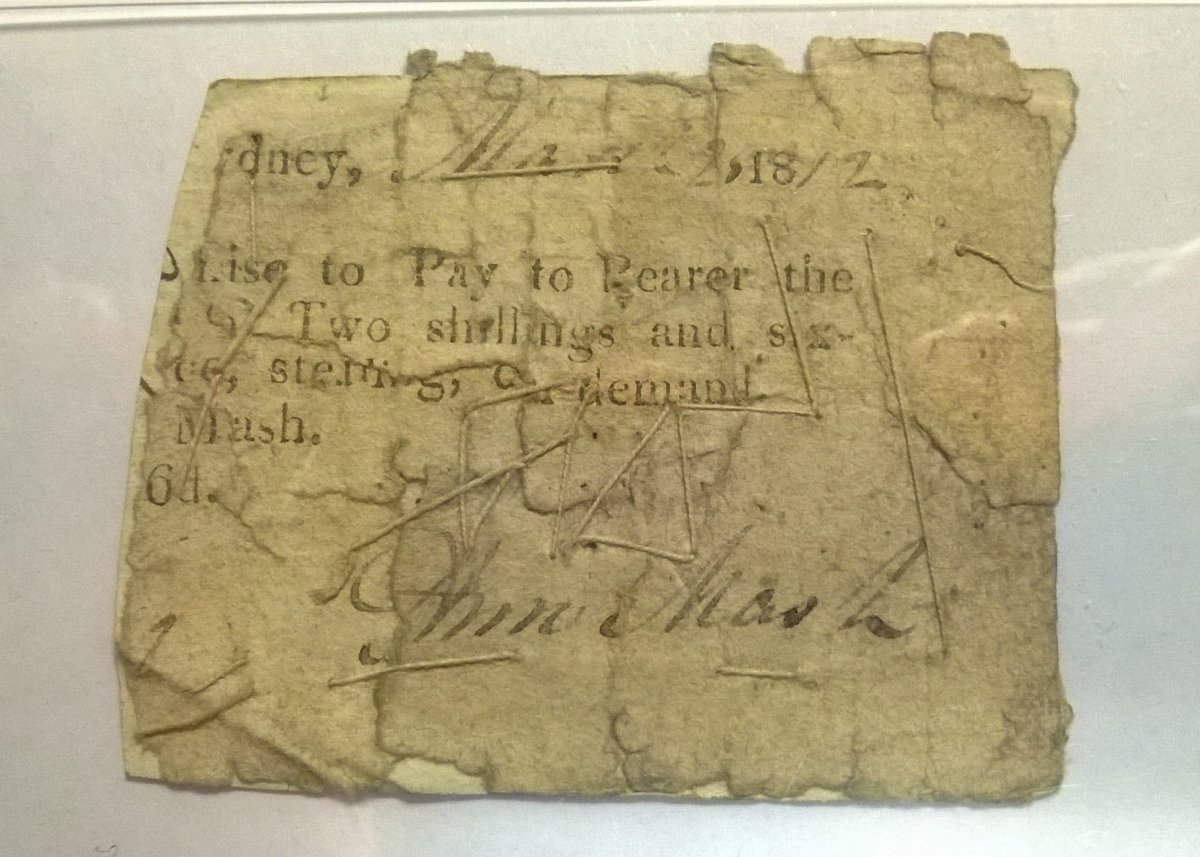 At the start of the nineteenth century, with no gold to support commercial banking and without the convenience of government-managed national currency, the economy of colonial Australia was chaotic and experimental. Commerce was driven by promissory notes issued freely by businesses, traders and private individuals (who may—or may not—be ‘good for it’). They were abundant, risky (you may be unable to pass on a ‘bad’ note), and transient (frequently-handled paper deteriorates quickly).

This promissory note is simple, unadorned, discoloured by age, worn by regular use and, obviously, cared for. The cotton stitching over the note shows that someone attempted to extend its life by fixing it to a more-resilient backing. It is—like currency today—both mundane and precious. It is a cultural relic that illustrates an interesting aspect of colonial history, but it’s also more than that.

It is signed by ‘Ann Mash’, which is awesome because she was one of Sydney’s earliest female entrepreneurs. Ann came to Australia as a convict on board the notorious Lady Juliana (a ship of the Second Fleet that is known as ‘the floating brothel’) in 1790.

Ann was literate, intelligent and industrious; within three years, she had established the first passage boat between Sydney and Parramatta, and employed staff to manage it. She was associated with three different men (including John Irving, the first emancipated Australian convict), before settling on William Chapman, with whom she ran several profitable businesses and raised eight children (all grew to be respected in early Sydney).

According to legend, Ann was a prosperous and active leader of Sydney’s business community up to her death in 1823, but we don't know if this is true. William died in 1810 and, while their hotel (The King’s Head, now 39 Argyle Street) was doing well enough for Ann to have no trouble transferring its liquor licence to herself (at the time, even holding one was difficult), she also sent her youngest son to an orphanage because she couldn’t afford to support him. Regardless, Ann’s story—a single mum in colonial Sydney caring for eight children (all younger than fifteen), while striving to maintain multiple businesses—is inspiring.

Ann’s promissory notes were abundant, but few have survived in public collections. This one was identified in the Library’s holdings by a numismatic expert (who we were lucky enough to have examine our Ferguson Collection). What we know about Ann comes, primarily, from the only published article about her life (which, happily, is also held in the Library’s collection: L. W. Hunt, ‘Ann Mash (Marsh?)’, Descent 16:4, December 1986, pp 154-161).

Ann’s promissory note is one of many in the Library's collection of rare Australian currency, and each sheds light on our colonial past. The Library’s Currency Appeal will support new research, preservation and digitisation of these items, and enable us to illustrate, share and contribute to cultural history through stories like Ann Mash’s.

To help us share the story of Australia’s currency, visit our Support Us page or donate online before the end of July.

This appeal closes on 31 July 2015. Any donations received after this date will be directed towards The National Library of Australia Fund, which supports conservation and digitisation of the Library’s collection.