Those of you familiar with my previous blog posts know how much fun I’ve been having working on the John Ryan Comic Collection. What probably isn’t as apparent, is just how challenging it can be at times. Let me walk you through my two most memorable challenges thus far.

Just last week I catalogued Osiris, a science fiction fanzine edited by Del and Dennis Stocks. Looking at the shelf list, I saw there were 20 volumes. I thought all I’d have to do was catalogue the title using the earliest issue to hand, which is what we do for serials/magazines, then add all the issue numbers into the holdings. I was about to find out it wasn’t going to be that simple. 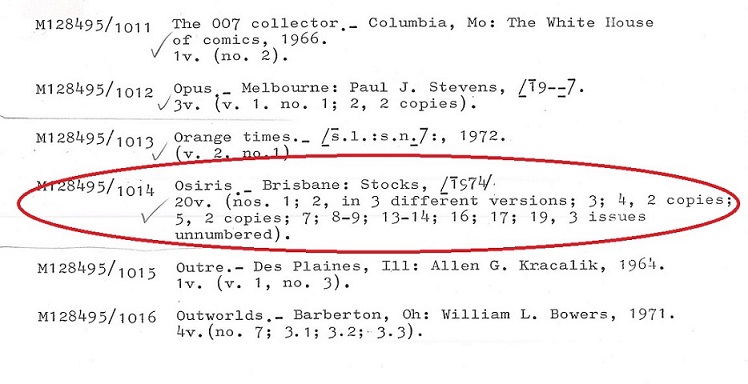 I suspected it wasn’t going to be so straight forward when I went to put the issues in order, and found that two of the issues had “Mk. 2” on the cover, indicating to me that I was likely dealing with two series, even though it had only been entered as one on the shelf list. As the majority of the fanzines I deal with have ceased publication, I like to put the issues I have in hand, in order, and check online to see if I can find when they began and ended (their “life dates” in cataloguer-speak), before I set about upgrading or creating the catalogue record. 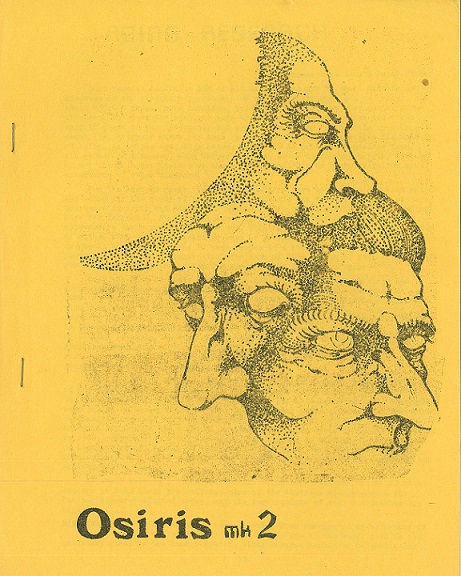 I searched the Library’s catalogue to see if we might already have a record for other copies of this title that had previously been received via Legal Deposit with no luck. We definitely didn’t hold any issues in our general collections. I then searched the Libraries Australia database which covers the holdings of Australian, American, British and New Zealand libraries. I found a minimal level record in WorldCat (USA), which didn’t tell me anything helpful about the suspected two series problem, but I imported it into the Library's catalogue so I could upgrade it once I had tracked down the answer. 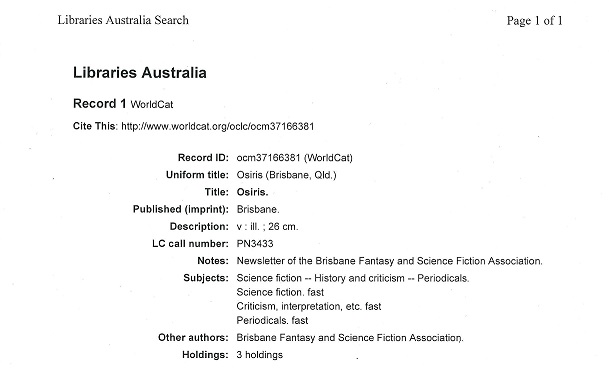 Fancyclopedia 3 is a wonderful online resources I use to assist me catalogue the John Ryan Comic Collection. While it did confirm that Osiris was a fanzine edited by Del and Dennis Stocks, it didn’t elaborate any further or mention a second series. The only place I found confirmation that Osiris existed in two series, was The Wright Collections’ work in progress list.

Having exhausted all online avenues, I then went back to the issues themselves, and started reading them. Much to my relief, I found a page in Mk. 2, no. 2, whole no. 12 telling me almost all I needed to know. Two series did indeed exist! Now I could get back to putting the issues in series order then number order, without having to second guess myself as to whether what I was doing was correct. 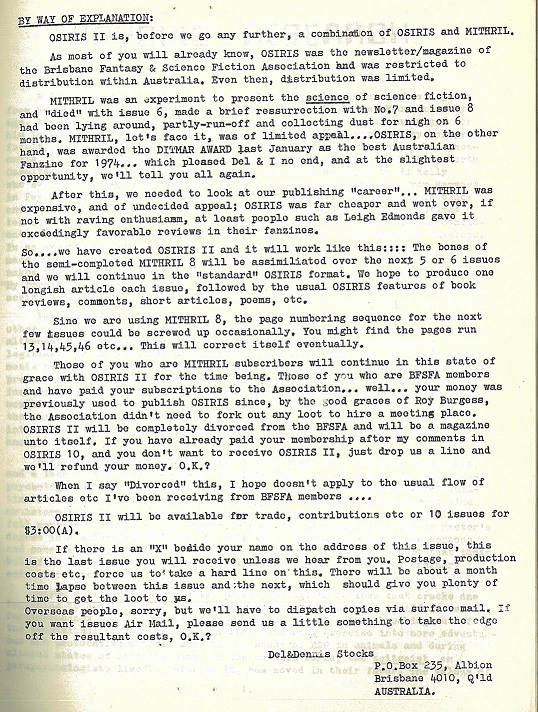 The first series consisted of issues 1–10. The second series started with Mk. 2, no. 1, whole no. 11, therefore continuing the general numbering of the first series. Unfortunately, I wasn’t able to find an end date. Knowing what I now knew, it was easy putting series one into order. Series two wasn’t as easy to sort out due to lack of numbering on some issues. Using the numbered issues as a base, I then looked at the unnumbered issues in front of me.

I eventually identified issue 11 by its pagination:

I used the postmarks on the backs of whole numbers 15, 18 and a special issue on Immanuel Velikovsky, to put them in chronological order. Thank goodness for Australia Post. 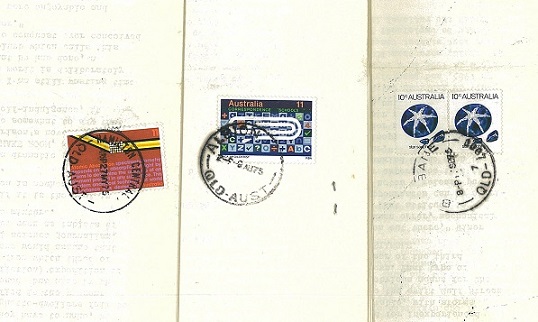 And I identified number eight from the first series, when I noticed the back page didn’t match the rest of the publication, and found it actually belonged to Mk. 2, no. 3, whole no. 13 and had been incorrectly attached to number eight (perhaps John Ryan’s little joke to test the investigative skills of a future cataloguer?).

Now for the cataloguing. Starting with the first series, I gave the minimal level record a massive overhaul. The fields I upgraded were title, publication details and description. The fields I added were:

I also upgraded the record to conform with the specifications of our latest cataloguing standard, Resource Description and Access.

I also added a note explaining that after number ten, Osiris merged with Mithril to become Osiris II, and then I added a succeeding title field to link the two catalogue records together. 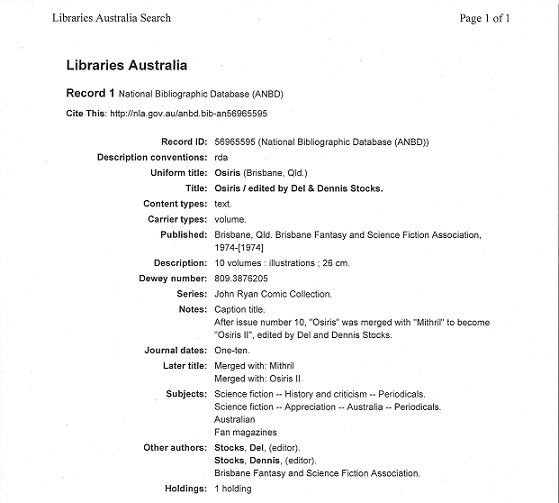 The record for the second series of Osiris I catalogued from scratch, as no other library had catalogued it to date. It differed from the record of the first series by its title, publication details and serial life dates. The Brisbane Fantasy and Science Fiction Association was no longer involved resulting in numbering peculiarities and two preceding title entries. 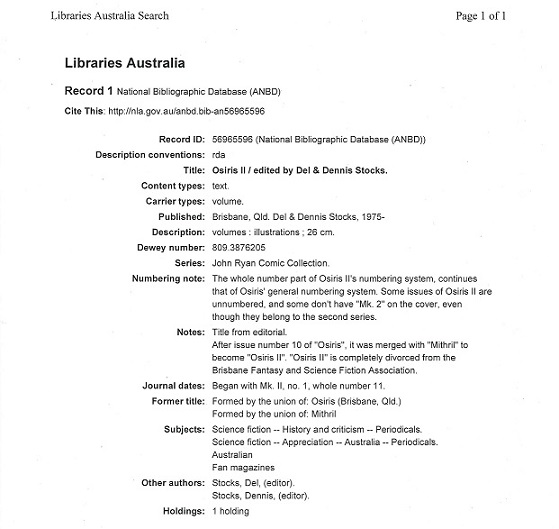 As I had catalogued Mithril last year, and there had been no mention of it merging with Osiris to become Osiris II, I added in the relevant history note and linking title entries. I also called up the general copies we hold in the stacks, to take another look at them and see what extra information I could garner from them. I’m so glad I did this, as in the editorial of number one, I found that Mithril began life as Miscellaneous Intelligence, so in went another linking title entry and a tweak of the history note. 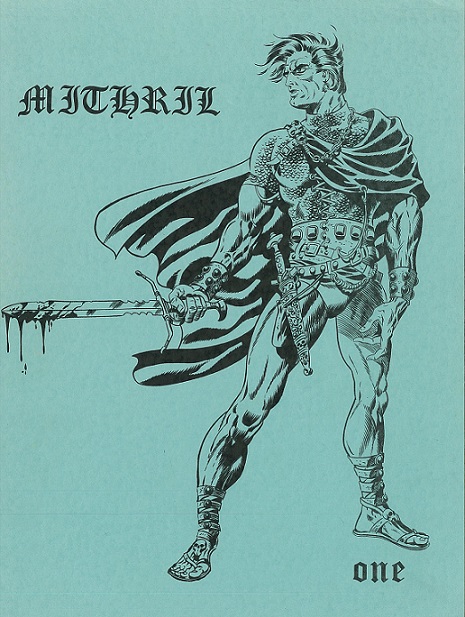 Reading over this now, it all seemed pretty straight forward, but in reality, the whole process took hours of intense uninterrupted concentration and culminated in a visit to the National Library’s Paperplate cafe for an extra-large black tea and the biggest piece of cake I could find. (Warning: cataloguing can make you fat!)

My other memorable challenge concerned Michael Jolly’s fanzine. It was nowhere near as intense as my Osiris challenge, but it still involved extra effort.

At first glance, all I had to identify it, was by its caption title. There were no dates or other publication features. While cataloguing rules do allow for this type of occurrence, I only allow myself to use this as a last resort, eg. [Place of publication not identified] : [publisher not identified], [19--?].

I did my usual searches, but no other library had attempted to catalogue it, nor could I find any information online. So I read it. In the middle of a paragraph on page four, I found Michael’s address, and then further on, he spoke about the recent (at the time) passing of Brian Jones from The Rolling Stones, which put the date of publication at 1969. 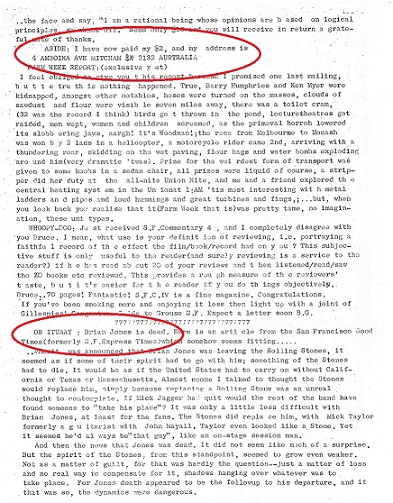 I’ve been working with the John Ryan Comic Collection since June 2014—I’ve become used to how particular publications are formatted. Knowing Michael Jolly was Australian, I began to suspect that his fanzine could be a contribution to Australian and New Zealand Amateur Press Association (ANZAPA), which was a compilation of short stories, zines and other articles submitted by various authors, especially as it contained a few pages of mailing comments, yet no mention of the publication. I got my ANZAPA index out, looked Michael Jolly up, and there he was! At the time the index was published, Michael had contributed two Michael Jolly’s fanzines to ANZAPA. The first was published in ANZAPA six, and the second in ANZAPA seven. I checked our holdings of these particular issues, and found that they were indeed published in 1969. If I had catalogued this item at the beginning of my time with the John Ryan Comic Collection, I never would have recognised and made this ANZAPA connection. 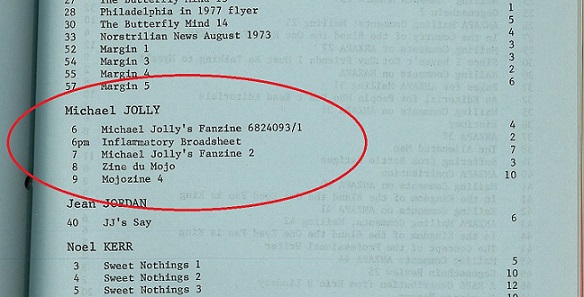 My resulting catalogue record for Michael Jolley’s fanzine ended up looking like this: 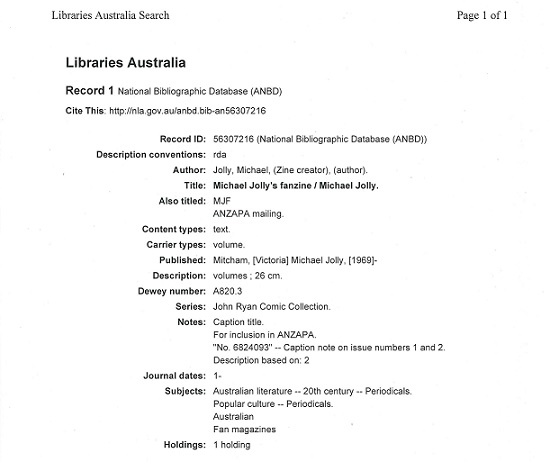 I’ve been a cataloguer for 19 years (ten of those have been spent at the National Library of Australia). I really enjoy a cataloguing challenge, so I find my work with the John Ryan Comic Collection extremely rewarding. There’s nothing like hunting down answers, following through suspicions, and eventually coming across the solution—it can be really exciting after having put in so much effort.

I always have accessibility in mind while cataloguing, which is why I go the extra mile to get answers so as to be able to create the most useful catalogue record possible. I hope my work helps a future researcher or fan discover material they have been searching for, that hasn’t been previously accessible.