Q & A with Claire Tracey

Q & A with Claire Tracey
Artists at the National Library

You might not know her name, but recent visitors to the Library will be familiar with the work of Claire Tracey in the form of our fire monkey, Chi-Ki, who has been standing guard at our front doors since early February. 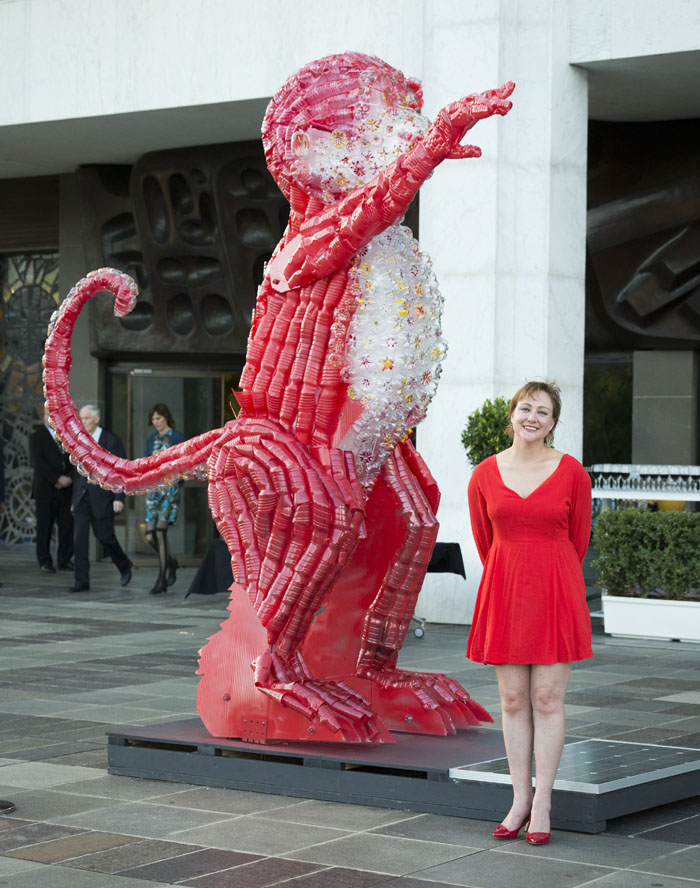 Claire is an environmental artist and sustainable designer, focussed on promoting ideas of responsible waste management by using recycled materials and renewable energy. She captured our attention with a magnificent water dragon sculpture—created for the City of Melbourne in 2012—that won the Museums Australia Award for Sustainability in 2013. 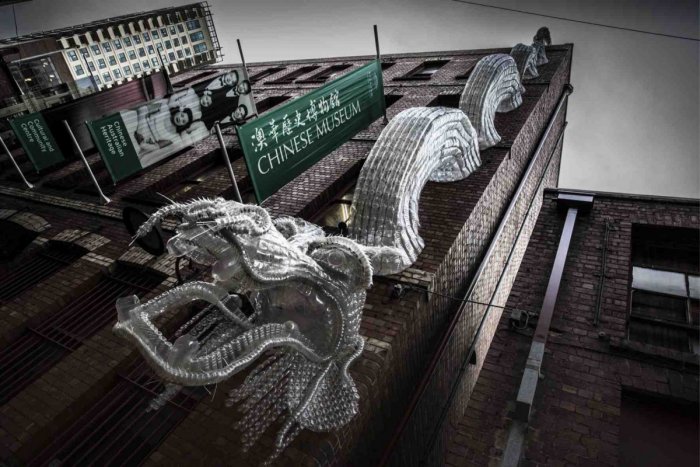 The fire monkey that she made for us stands 2.5 metres tall, and was made from a mix of hi-tech polycarbonate and recycled plastic bottles. She used the bottle bases to form the monkey’s belly, daubing nail polish along the ridges to give the impression of dozens of flowers. “It’s about revaluing this quite common, mundane object and making it special and individual by putting in the hours with the nail polish,” Claire has said of her work.

We caught up with Claire after she finished installing Chi-Ki to ask about her art and her connection to libraries.

I try to create art that is big, fun and accessible to the community. Often my works have an environmental theme and I hope to create change by conveying a positive message. Art can be an amazing catalyst for shifting perceptions without preaching, forming a direct emotive connection that avoids the limitations of language. I try and find that connection with the audience in my sculptures. 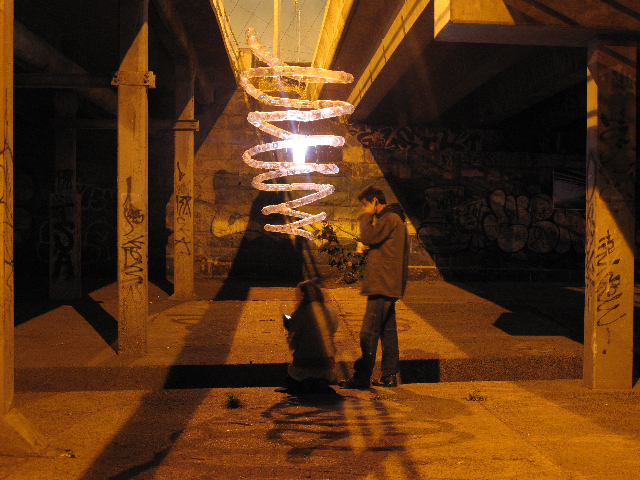 Which artists inspire you at the moment?

The work of Andrew Thomas Huang and Bordalo II has really inspired me this past year. Their art both uses re-crafted objects that are sophisticated and inventive. I like that they present handmade elements in a way that redefines the meaning of the objects used. As art works the powerfully speak for themselves which I think is important in the arts. Particularly Huang's film 'Solipsist' the way he combines new media art, film, dance, costume and craft with puppetry is stunning.

Zodiac by Neal Stephenson. What’s not to love about a granola-James-Bond protagonist who ‘MacGyvers’ solutions to environmental terrorism with copious amounts of improvised resourcefulness and LSD?

I would describe it as a big, fun, crazy monkey. I'd also describe it as really challenging and amazing at the same time. Maybe that's why I'm so addicted to making art, there's never a dull moment. 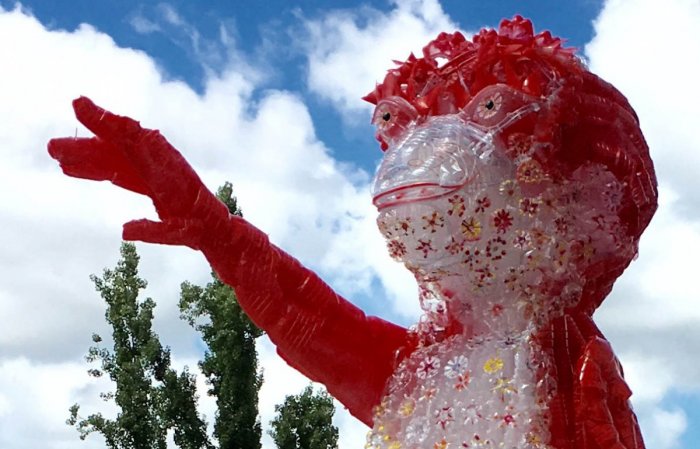 What was the hardest part of making the monkey for the National Library?

I love the transformative process of working with recycled materials, so that a bottle is no longer a bottle but it’s hard in so many ways. Focusing on small parts while constructing the synergistic whole, the weather, even the wonderful conversations you have whilst installing can be distracting at times. However these are also many of the things I love about making public art. I think the difficulty involved in creating a piece is the most enjoyable part of the challenge.

Can you name works of any art form that have influenced your own development as an artist?

That’s a hard one. I find inspiration and influence is often a subconscious cacophony of many sources. The main driving factor behind my practice is a curiosity and love of building along with a deep conviction that humans are meant to be careful stewards of the environment, not casual destroyers of it.

Who is your favourite literary hero or heroine?

Phryne Fisher. She knows how to get stuff done, look fantastic and have a damn fine time whilst doing it.

What’s the strangest piece of advice you’ve ever been given as an artist?

In 2010 I went to Shanghai for the World Expo with a team of artists to create work for the East China Normal University. Melbourne artist Cameron Robbins made a fantastic series of wind powered drawing machines for the exhibition. His work is that rare combination of casual ingenuity and careful planning. When one of the machines tore through the paper it was drawing on due to high winds Cameron had some great advice. He still hung the work, saying you can choose to “turn your f*ck ups into features.” Now anytime something goes awry I think of that and do my best to work with whatever is going wrong rather than against it. 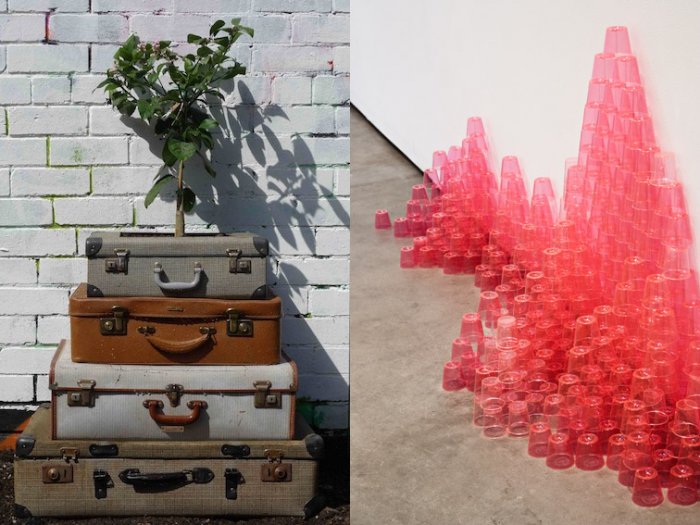 What’s the strangest question you’ve been asked about your artworks?

“Can you explain to me in ten seconds why this is art?”

They’d walked up to me on the street in a huff, and walked off in just the same way.

A small film that shows the impact of the everyday one-use plastic items we use. 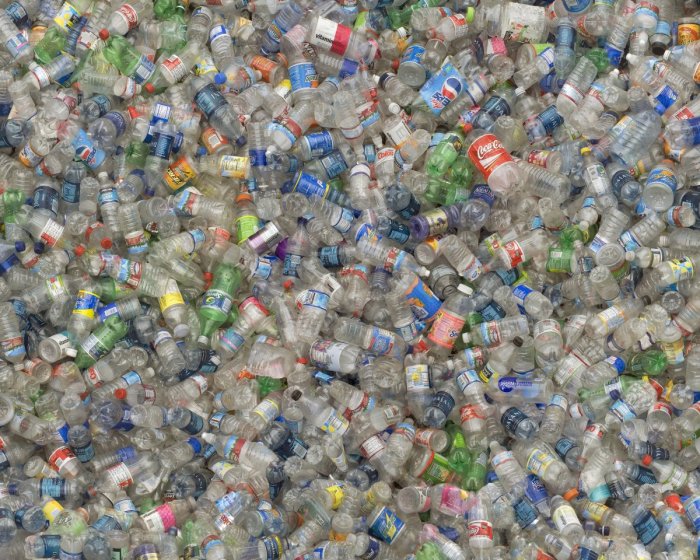 It’s one of the only public spaces I can think of where you can just be, without having to do anything. You do not have to identify yourself, buy anything or talk to anyone else yet you can be in a community environment. I think that’s important, particularly at the moment as our public spaces become more marketed and privatised it’s good to have a neutral place for contemplation and learning.

Libraries are one of the few places, along with parks and art galleries, where you can loiter without suspicion, where you don’t have to check your phone every 10 seconds just to avoid making eye contact with other people.

So along with the joy of reading I think libraries are good for proactive loitering. In fact, you can loiter and it looks like you’re doing the right thing—improving yourself through books rather than running amok on the streets.

I grew up loitering in libraries, my Mum used to be a librarian and I would build castles and caves out of the books after school. It was like having giant lego but with stories and pictures. Books have a fantastic smell and that is one of the things I love about libraries. The smell reminds me of sitting in a book castle, eating vegemite sandwiches and looking at pictures in those old 70s school science manuals. There is something about the memories that smell evokes that makes me instantaneously studious and imaginative. 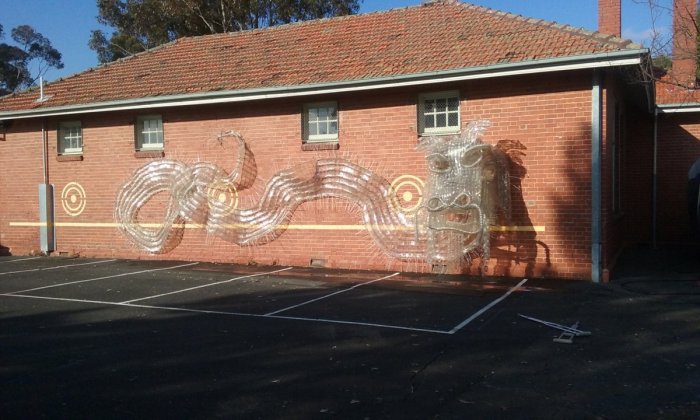