This post was originally written for the ‘The Art of Cartoons’ feature in the National Library of Australia Magazine. 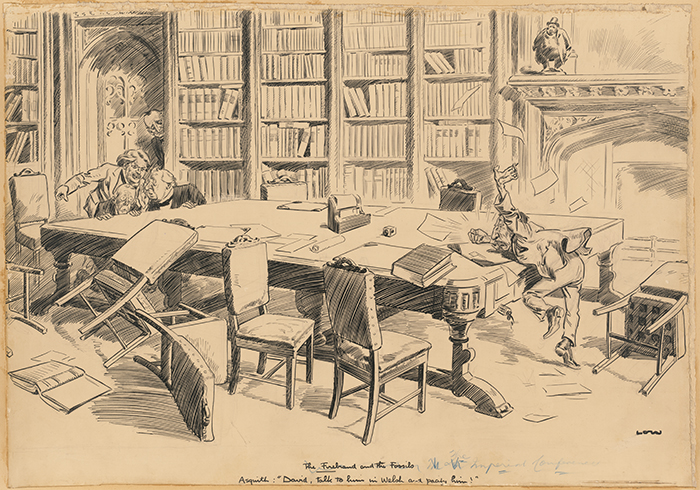 Since Federation, there is one thing that holds true for all Australian prime ministers. They have all experienced the withering gaze of the cartoonist. For Billy Hughes, Australia’s prime minister during the First World War, his cartoonist nemesis was David Low. Low, in the great tradition of many famous Australians, came from New Zealand and was later destined to further his career in England. While in Australia, however, he made it his mission to prick Hughes’ ego and hold him accountable for his actions.

This cartoon, which was published in The Bulletin, captures a moment during Hughes’ trip to England in 1916. At the time, Hughes was lauded for his strong support of the war effort. Behind the scenes, however, there were tensions between Hughes and the British Cabinet. Here you can see British Prime Minister Herbert Asquith and Cabinet Minister David Lloyd George being harangued by Hughes. There are upturned chairs and fluttering papers. The caption has Asquith saying ‘Talk with him in Welsh, David, and pacify him!’—a reference to the shared Welsh ancestry of Lloyd George and Hughes. Low later said this cartoon was about Hughes’ propensity to grandstand: ‘It was persistently reported … that behind closed doors his habit of talking people down was an embarrassing experience to the Asquith Cabinet’.

Ronald Munro Ferguson, Australia’s Governor-General, was so amused by the cartoon that he asked Low for the original. After Munro Ferguson left Australia, the cartoon made its way to the Parliamentary Library, where it was displayed for many years. It is now part of the National Library’s collection and is a great reminder of the role cartoonists play in recording the personalities of our leaders.