Today is UNESCO’s World Book and Copyright Day, when libraries in over 100 countries get to show off their collections to their friends. It’s a celebration of books and of the authors and illustrators that bring their books to us readers. April 23 also marks the deaths of William Shakespeare and Miguel de Cervantes, the creator of Don Quixote, but instead of those I thought I’d share some of my favourite rare books from our collections. There is a very scarce first edition of a book that changed the world, a beautiful example of the art of fine printing and engraving, the first illustrated book produced in Australia, and one that shows you seaweed in a way you may never have seen before!

The Origin of Species, first edition 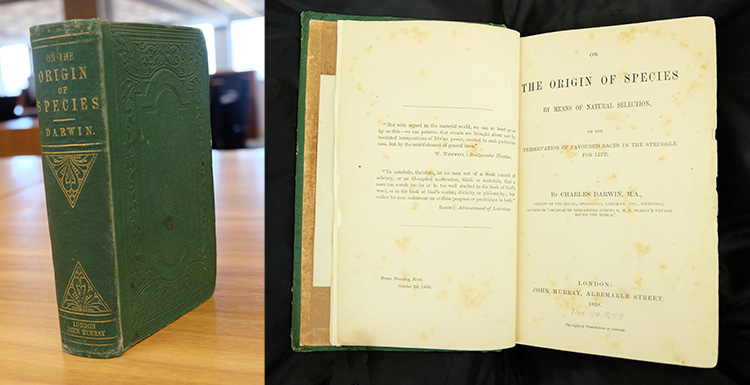 On the origin of species by means of natural selection, or, the preservation of favoured races in the struggle for life / by Charles Darwin (1859), nla.obj-21418805

This copy of one of the most influential books ever published is one of the earliest known surviving copies of the first edition to arrive in Australia.  The first edition of Origin was published on 24 November 1859, limited to 1250 copies, and this copy is believed to have arrived in Australia by early March 1860, as it bears the inscription of its first local owner, Williams Woolls of Parramatta, with the date “March 17/60”.  Woolls (1814-1893) was one of that breed of 19th century gentleman scholars who took religion and science equally seriously; he was an Anglican clergyman, schoolmaster and botanist.  He made annotations throughout the book, although some are now faded and rubbed, making them hard to read. The book also bears the inscription and bookplate of another owner Harold S. Mort, (who became a renowned conchologist) dated 2/10/00 and the later plate of Robert L. Usinger. 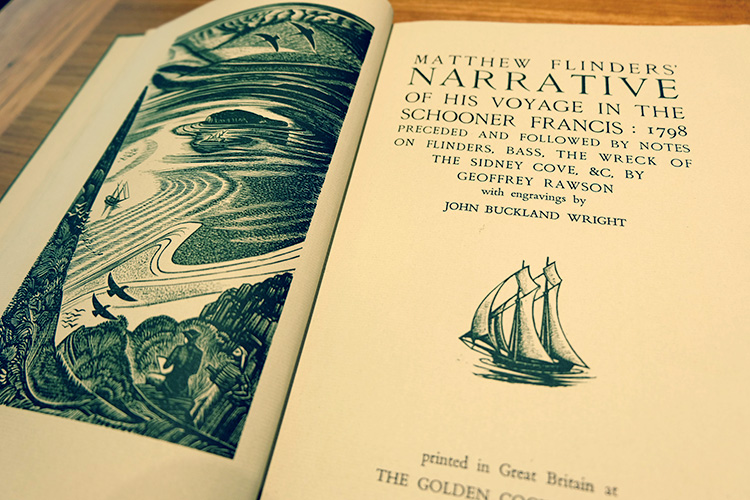 Matthew Flinders' narrative of his voyage in the schooner Francis, 1798 : preceded and followed by notes on Flinders, Bass, the wreck of the Sidney Cove, &c. / by Geoffrey Rawson ; with engravings by John Buckland Wright (1946), nla.cat-vn764057

Here we have a wonderful example of the work of a 20th century British fine press. Designed, printed and published by the Golden Cockerel Press in London, Matthew Flinders displays the exceptional quality and artistry that distinguishes a fine press book from other small press publications.  Golden Cockerel Press produced many handmade limited editions between 1921 and 1961, and its books are known for the beauty of their illustrations, which were mostly wood-engravings.  The type was hand-set, and handmade paper or sometimes vellum was used.  The text of this book is Flinders’ account of his expedition to the Furneaux Islands in Bass Strait in the colonial schooner Francis in 1798.  The engravings were created by New Zealander John Buckland Wright (1897-1954).  This is one of seventeen books he illustrated for Golden Cockerel Press. 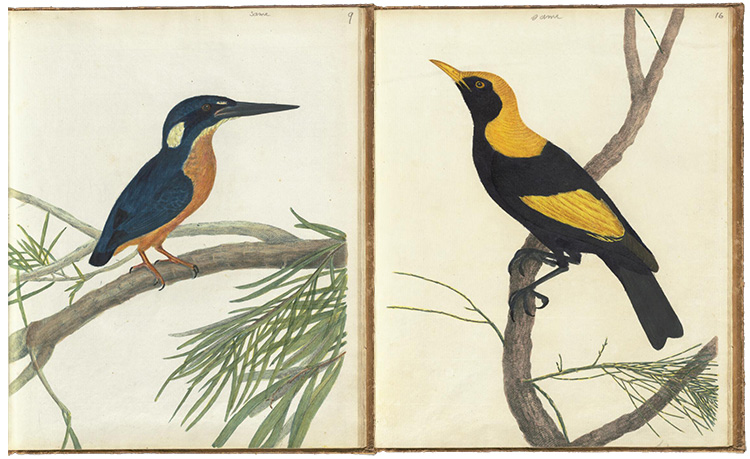 This book is from the Library’s Gregory M. Mathews Collection.  When compared to John Gould’s ‘Birds of Australia’ or to Mathews’ own ‘The Birds of Australia’, this modest-looking book might not seem to stack up.  But in its own way, it’s probably just as important and can lay claim to a number of ‘firsts’.  John William Lewin (1770-1819) was the first professional, non-convict artist in Australia.  An earlier edition of this work, titled ‘Birds of New Holland’ was published in London in 1808, but Lewin arranged for ‘Birds of New South Wales’ to be put together from plates and prints that were kept in Sydney.  It was printed by convict printer George Howe, the ‘father’ of Australian printing.  The book was not only the first private (ie non-government) publication in Australia, it was our first natural history book and first illustrated book.  It’s a testament not only to Lewin’s talents as an artist, but to Howe’s skills and determination as a printer working with worn type, poor quality ink and supplies of paper cobbled together from wherever he could lay his hands on them.

The nature-printed British sea-weeds : a history, accompanied by figures and dissections of the algae of the British Isles / by William Grosart Johnstone and Alexander Croall (1859-1860), nla.cat-vn1-6716

‘Nature printing’ is the technique of making prints directly from natural objects such as leaves, flowers, insects’ wings, feathers, or in this case, seaweed, without the intervention of an artist, engraver or photographer.  We’ve probably all made some sort of nature print as children, by inking a leaf and squashing it between two sheets of paper.  This book, with prints by the most prominent 19th century exponent of the technique, Henry Bradbury, shows just how brilliant and life-like the results can be when industrial printing methods are used.  The object is compressed at high pressure between a sheet of steel and another of a softer metal such as lead to obtain an impression.  This is then transferred by electrolysis to a copper sheet that can then be inked by hand in single or multiple colours and used to make the print.