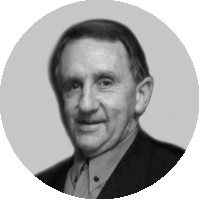 As the National Library’s PROMPT theatre scrapbooks appeal passes two-thirds to its target, former staff member Richard Stone explores some of the fascinating characters contained within the scrapbooks as well as the fans who adored them. The appeal closes on 31 July 2018.

Every time I leaf through a theatre scrapbook it is an intriguing journey of discovery. I feel privy to another person's love of theatre whether its manifest as a preoccupation with a starry personality, mapping a show business career or a company's history. Mostly it is seen through the collection of someone's theatre going history in scrapbook form. 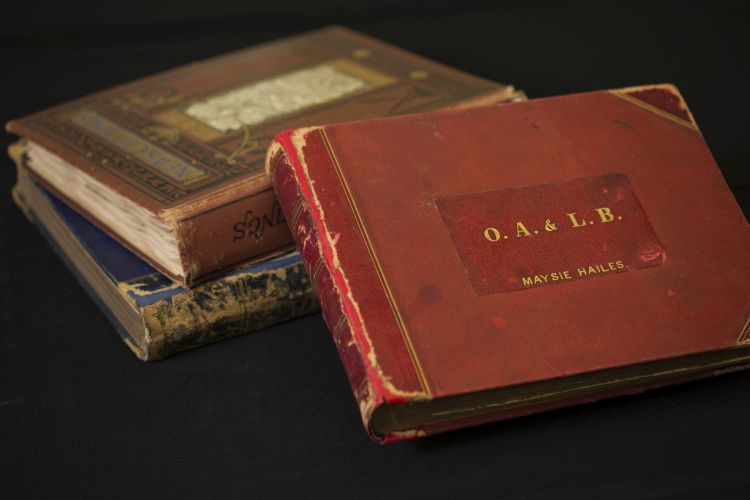 In fact scrapbooks are unique personal creations, combining elements of diaries and photograph albums and lots more. They are made up of a heady mix of information scraps-tickets, newspaper clippings, press photographs, reviews, programs, advertising brochures. And they sometimes contain original photos, sometimes family snaps and sometimes have handwritten notes and comments. Theatre scrapbooks are indeed multi-media phenomena.

If you are going to collect Australian performing arts material you cannot avoid coming across scrapbooks. The National Library has seventeen theatre scrapbooks acquired over the years. Together they cover disparate aspects of Australian theatre history between the 1850s and the mid-twentieth century.

Physically the scrapbooks are in a variety of sizes. One generous specimen comprises three large folio volumes packed with cuttings and programs on all sorts of popular and curious entertainments  including circus, vaudeville, side show alley attractions and sporting teams. The compiler (unknown as is the case with a lot of scrapbooks) seems to have a particular interest in performing animals and buxom show girls.

Other smaller scrapbooks cover a pot pourri such as performances of Gilbert and Sullivan operettas, various periods of ballet and opera performances, popular J.C. Williamson attractions, and the Suzuki method of violin teaching. One scrapbook is devoted to the career of Bessie Campbell-a virtuoso banjo player between 1889 and 1918. This is probably the only substantial documentation of Bessie's career. 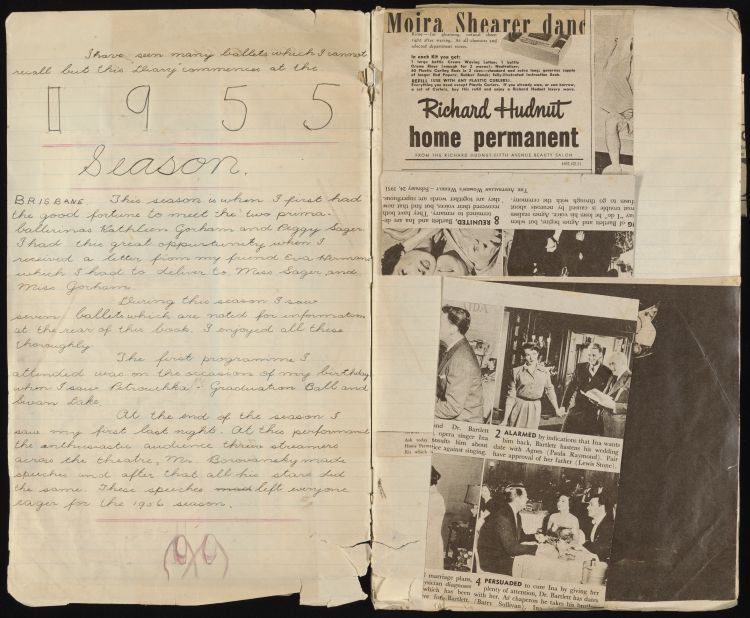 My ballet diary / [compiled by] S. Gans, [and held in the PROMPT Collection, National Library of Australia], nla.cat-vn1834543

On the other hand, Oscar Asche and his wife Lily Brayton were stars of the first order and well documented. Even so, two hefty scrapbooks add significantly to the recording of their careers between 1901 and 1911. Oscar was born in Wollongong, NSW, but took off to London where he became a famous actor, director, author  and entrepreneur. Lily Brayton was a popular English actress and business woman in her own right. They were married in 1897, established their own company, specialising in Shakespearean roles, and toured to Australia three times. The scrapbooks cover the years prior to 1916 which was the year of his huge success with the exotic musical, Chu Chin Chow. They mostly comprise reviews, feature articles and notably press photos from various pictorial theatre magazines. They contain a wealth of superb illustrations of sets and costumes in Asche productions. As well, the many portraits of Lily, which have been carefully snipped out of magazines, testify to her considerable beauty and thespian talent. 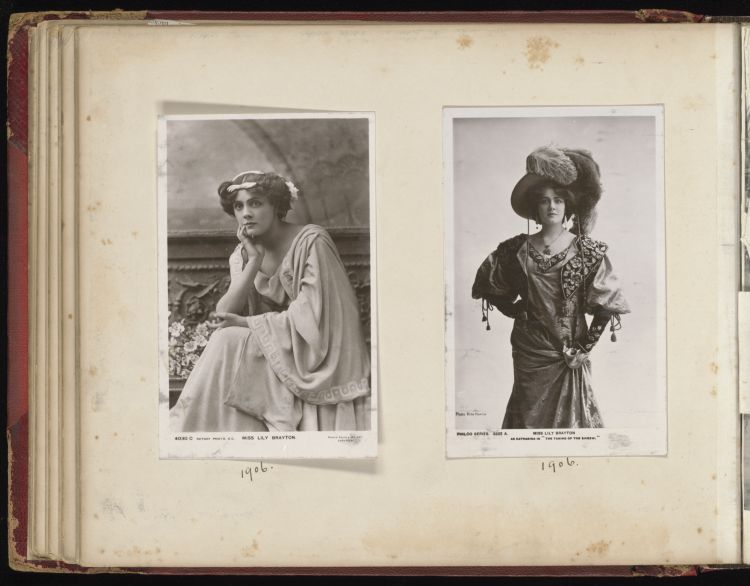 Contrast the Asche-Brayton starry phenomena with one T. J. Buckland, a violinist in late-nineteenth century Melbourne. Without his scrapbook and the programs he collected, we would know very little about Mr Buckland (his Christian names are yet to be established). But we can see that he was a busy man in 'Marvellous' Melbourne of the 1880s when musical culture was blossoming. Buckland attended many concerts as well as becoming a well-established violinist appearing regularly with musical societies, suburban orchestras, chamber orchestras and choral groups in Melbourne.

In the midst of programs stuck in the scrapbook a rare gem appears with a concert program in which the line-up of performers includes “Mrs Armstrong. (Miss Mitchell). First Appearance”. Twelve months later in June 1885, in another concert program in Buckland's scrapbook, Mrs Armstrong was billed as “The Charming Soprano”. It was of course none other than Nellie Melba. These two programs lovingly pasted in to a scrapbook represent her earliest public concert appearances. In another twelve months she travelled to Europe where she changed her name to Nellie Melba and embarked on her stellar career.

Another look at the 1885 concert program revealed that Act 1 ended with a song, The silver Rhine, sung by Maggie Moore, in “Her First Appearance at the Town Hall”. Maggie was of course the wife of the entrepreneur J. C. Williamson and a very popular actress and light soprano singer in her own right. It is intriguing to wonder how well known it is that Maggie Moore and Nellie Melba once shared the same concert stage.

Mr Buckland's intention in keeping the concert programs and making a scrapbook was not to record the careers of Nellie Melba or Maggie Moore. He was documenting his own experiences in Melbourne's musical culture whether as a member of the audience or as a participant. It is more the case of the right person at the right time, unwittingly capturing in the form of a scrapbook, the appearances of a new star and an established one.

We theatre lovers and researchers-a century or more later-can only applaud the survival of such a scrapbook in the National Library and support it's long term conservation.

> Find out more or donate to the PROMPT scrapbook appeal