Fanzines
For fans, by fans 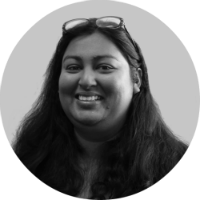 I recently received a reader enquiry about the first issue of The official savage garden fanzine, published in 1997.

The enquiry itself was quite straightforward, but the opportunity to delve into the Library's catalogue lead to another unexpected find.

In this case, what I also found was Darth Vader fanfiction: 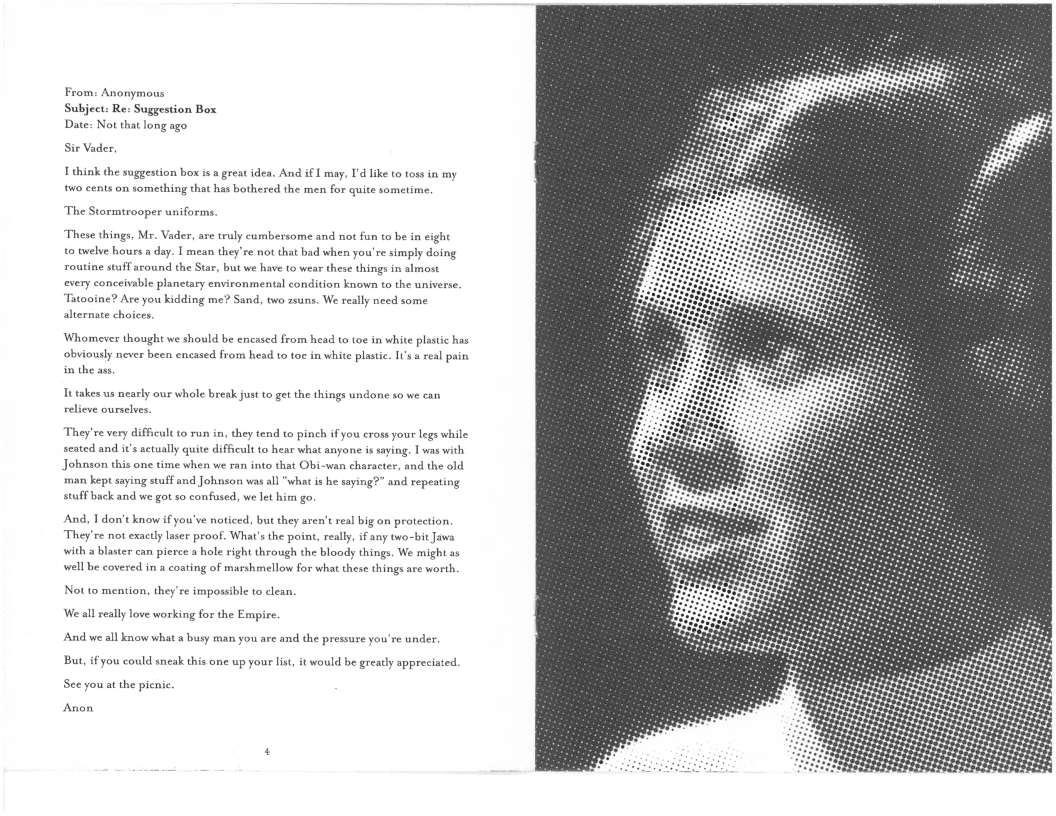 In other words, I found more fanzines in our collection!

Here I'll admit that I thoroughly enjoy fanzines. I enjoy their sense of immediacy. It seems such a small distance between being passionate about a cultural phenomenon (pop or otherwise) and then sharing your creative outpourings about it with anyone else who is willing to listen.

And the range of those outpourings can be amazing, from a delightfully jumbled mix of hand-drawn art and fiction to an elaborately glossy production of inspired original work.

The DNA of a fanzine is that it has no built-in limits. It is literally a publication created by fans for fans.

Some of those fans may be immensely talented. Some may have exceptional skills or real-world editorial training. A fanzine, however, even with all those talents and skills and training brought to bear, will always be an unofficial production.

As long as it’s made by one or more fans of something or someone, inspired to creative action and looking to share the love with other fans, it qualifies.

The Space Age and Mid-Century Muses

It is hard not to feel nostalgic when you come across the Star Trek fanzine Terran times from 1969, or Zerinza: the Australasian Doctor Who fanzine from 1977: 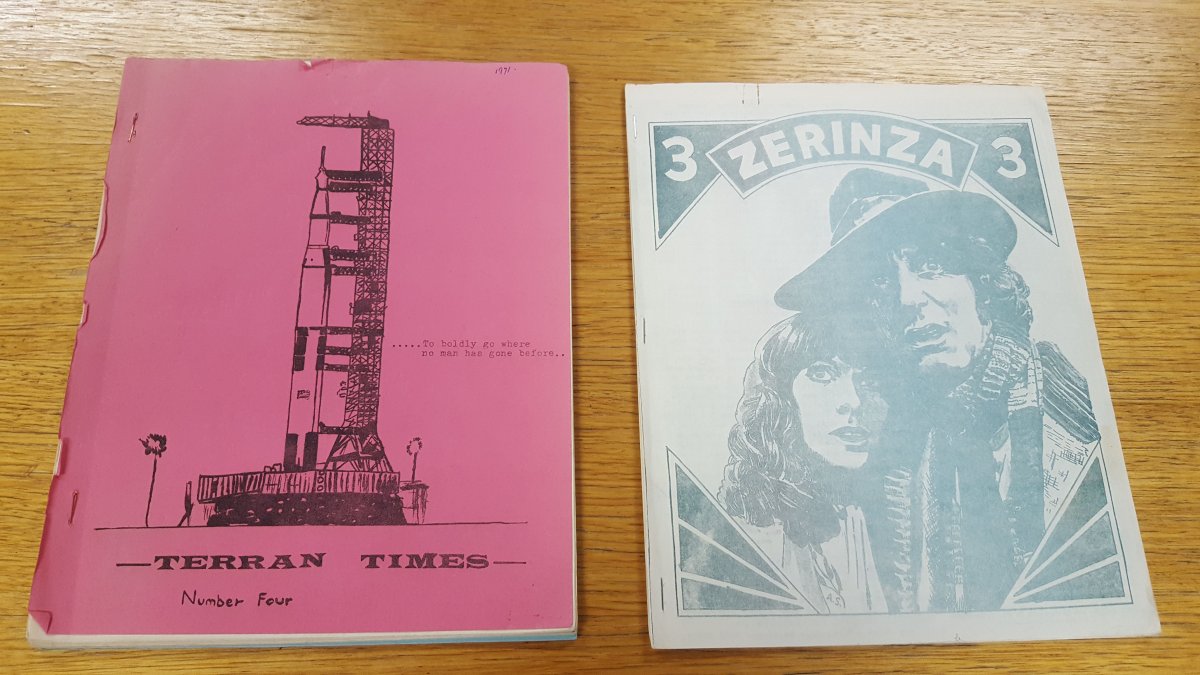 Fans of the TV shows, Star Trek and Doctor Who, have perhaps the best known examples of fandom in the mainstream but this isn’t where fanzines start. The fanzine Futurian observer was talking about a well-established Australian science fiction fan community back in 1940.

In a year in which the inescapable realities of war were everywhere, this little publication denounced ‘the threatening ban on magazines’, reported on Government ‘restrictions on pulp imports’ and referenced meetings in which quizzes and scientific discussions were star attractions.

One of the first lines in Issue #1 is a dire warning that Australian fans needed to be more engaged. In contrast, issue #35 talks about a parody newsletter from a convention that never happened and the author ‘hibernating’ from the ‘Sydney scene’ to avoid the ‘fighting, scratching and squabbling’.

You can read digitised copies of Futurian observer here.

Fanzines are a fascinating insight into the volatility of fan communities and how they operated at the time of publication.

The fanzine Thyme, for example: 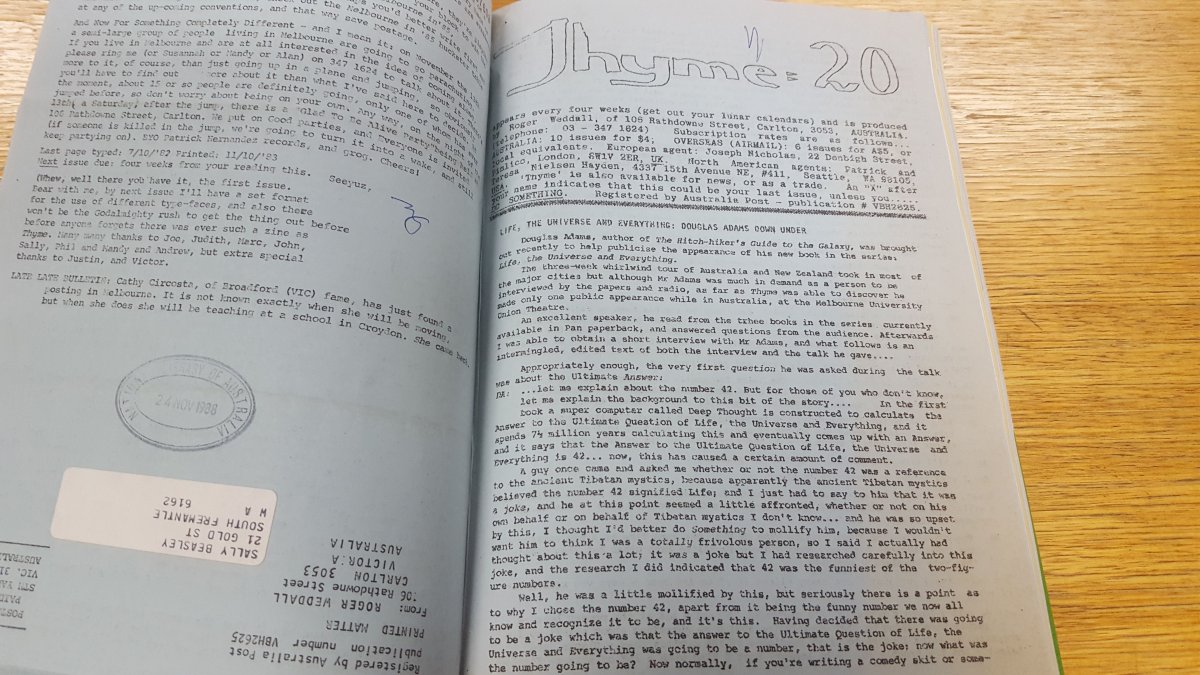 It also documented the expansion of the Australian sci-fi fan community, including news from New Zealand, fan art, conventions, and competitions.

But of course, a creator might prefer a different path. Although it often takes a village, Goethe did once say that “the soul that sees beauty can sometimes walk alone”.

If you find yourself in the latter category, and are the creative type, you could create your own fanzine and then offer it around, like Futurian observer, or this fanzine by Michael Jolly from around 1970:

Are all fanzines about hyper-drives?

For those of you beginning to wonder if all fanzines are only about science fiction, fear not! There’s a surprising number of things and people you can be a fan of.

Music fandoms have always been a hotbed of activity, as you can see in Kiss sacrifice from 1993 or the previously mentioned The official Savage Garden fanzine, which ran from 1997 to 2001: 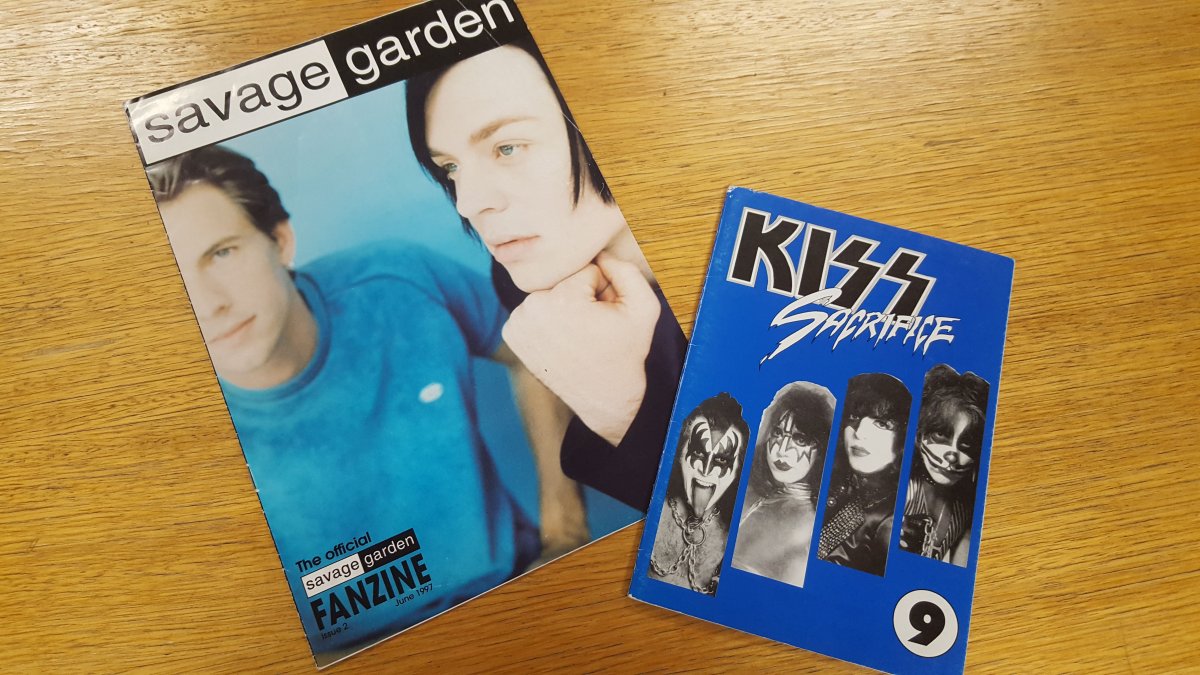 Like science fiction, music fanzines aren’t just about the music, though. Entertainment and activism have long rubbed elbows in the world of music and fanzines are no exception.

Some, like Stoop fanzine, an alternative rock fanzine from 1998, are a mix of event information and community news. Others, like Live against: Adelaide vegan straightedge are a vibrant call to arms.

So fanzines are a great way to document not only what the fans love and why they love it, but how it inspires them.

In which case, sport is just as inspiring as anything else.

We might not all be Richmond fans but I believe The paper tiger: the independent Richmond fanzine is still a great fanzine: 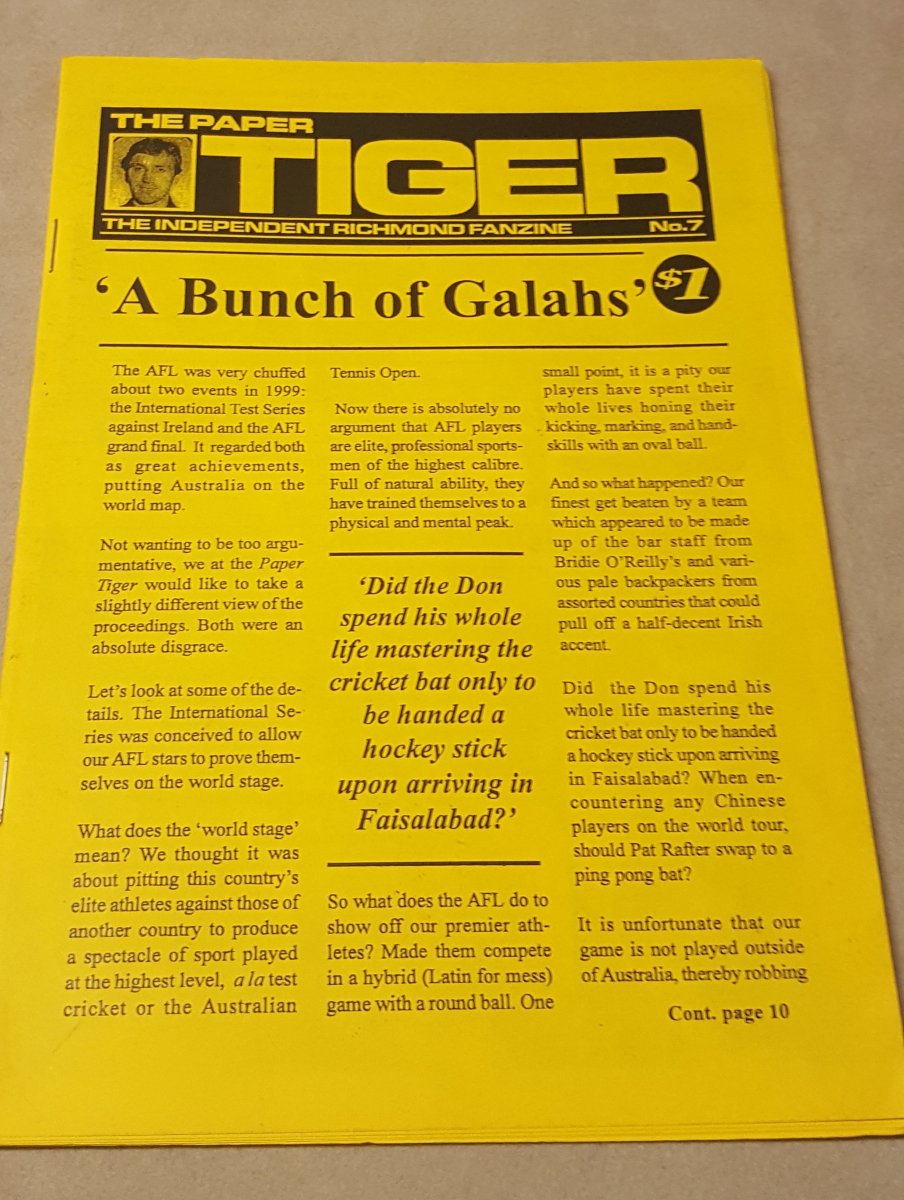 Best of all The paper tiger is a stark reminder that we can love something and still be critical about it.

Paper is so last year!

Second on my list of favourite fanzine features is format.

The internet and digital technology has developed so many ways for fans to communicate with other. They can talk and interact online. They can make plans for community meet-ups, share fanart and fanfiction on social media.

So it makes sense that fanzines like Woozy exist. This fanzine ran from 1992 to 2001 and didn't just have a mind-boggling variety of subjects, but used a variety of formats including CD and tape!

But in case you think that paper fanzines surely don’t get published anymore in this digital age, The Yeezus zinezus was produced in 2016: 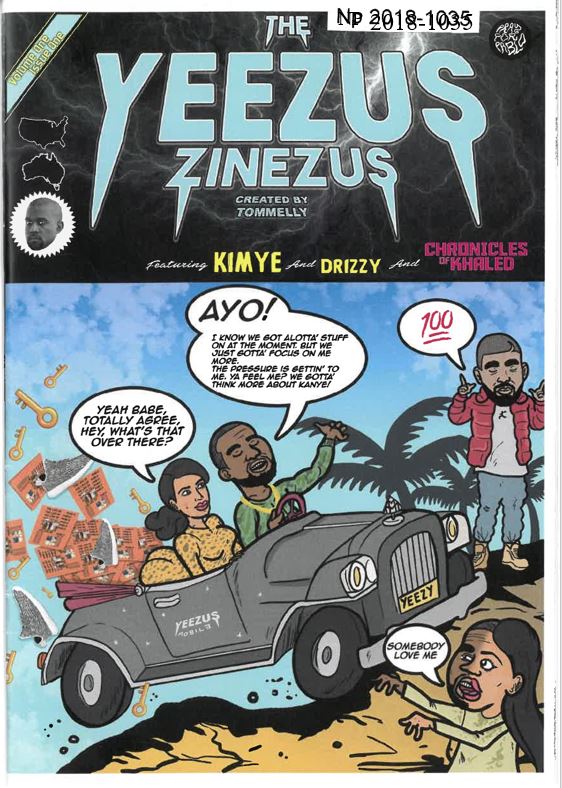 So, how do you find zines in the Library?

Even basic searches for ‘zine’ or ‘fanzine’ will net you a surprising number of results. You could also just pop in the name of someone or something you’re interested in, just to see what you find in the catalogue.

Which is how I found the parody zine Dealing with post-human abilities/ Australian Government, Department of Post-Human Affairs by Dana Maxwell Cooke (2009): 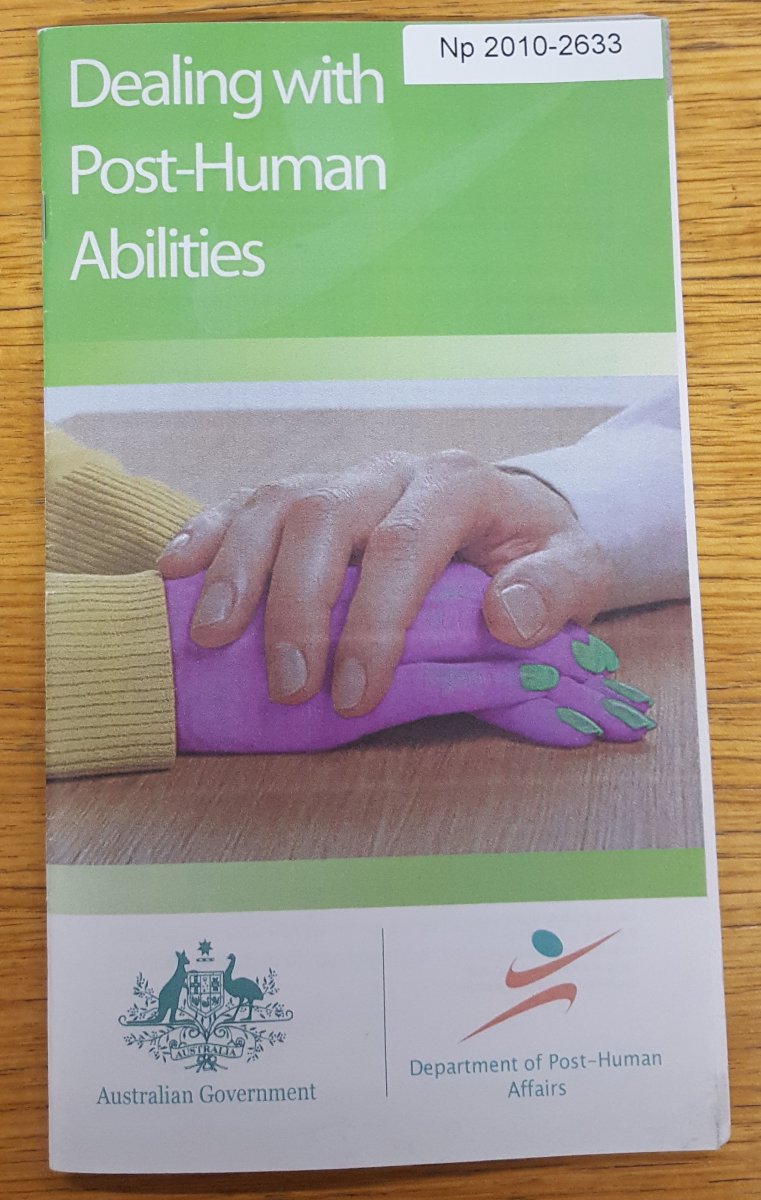 Which brings us back full circle to science fiction.

Though maybe that will change in the decades to come. After all, with no built-in limits, there’s no telling what or who Australian fans will be inspired by next.