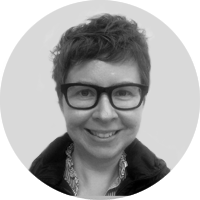 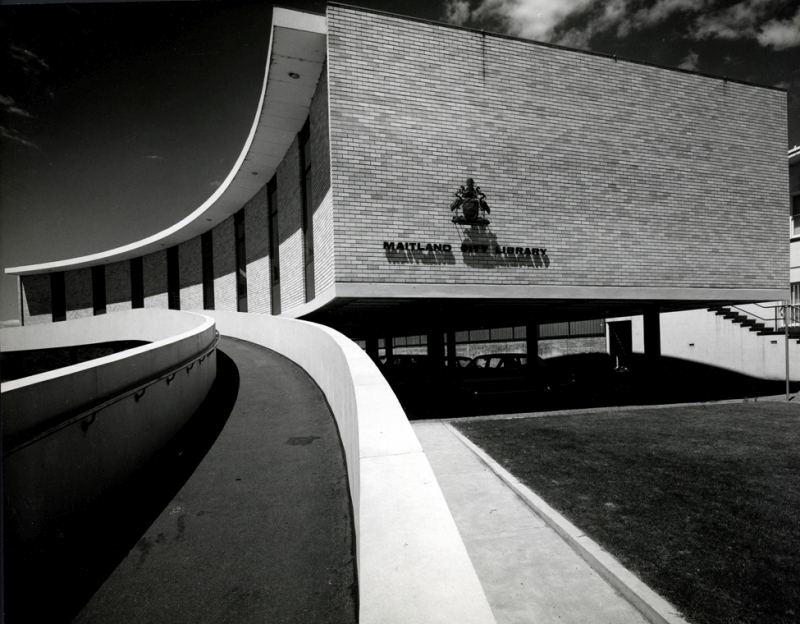 This year we celebrate the 50th anniversary of the National Library’s ageless building, its Contemporary Classical style realised by chief architect and principal designer, Walter Bunning. But did you know that Bunning designed another striking library building that also opened its doors in 1968? It’s Maitland City Library in the Hunter Valley, New South Wales.

I’ve been fortunate to experience both: first Maitland Library from early childhood in the 1970s, and later the National Library as an adult. I learnt as a child that a beautifully designed library primes a person to pursue wonder. I learnt that a visit could transform a life. I saw it with my own eyes.

Even before we’re old enough to use a library’s collections, we first engage with the building that houses them. From my earliest visits, when I was three or four in the late 1970s, I knew that Maitland Library was unlike any building I’d ever seen.

I would hold my mother’s hand and walk up, up, up the long, curving slope that follows the arc of the library’s façade. To get to the top, I had to concentrate, and my thoughts would turn to curves and arcs and coils and tallness and longness. Long, sustained thoughts measured in little steps.

Inside, the globe lights above the curved reference desk glowed warmly like moons in orbit, following the building's curvature. It was the first building I’d ever been in that wasn’t a rectangle. What shape was it? The ceiling definitely wasn’t a rectangle. That realisation brought with it a lot of questions. A child’s depth perception is different from an adult’s, and it seemed to me, as a very young child, that the dimensions of the curved ceiling space tapered off…forever. I would test this idea by standing in different spots in the children’s and adults’ libraries to compare. Wherever I stood and looked up, the curved lines in the wood-slat ceilings went on…infinitely. This was extremely exciting: wherever I stood, my thoughts could keep getting bigger. 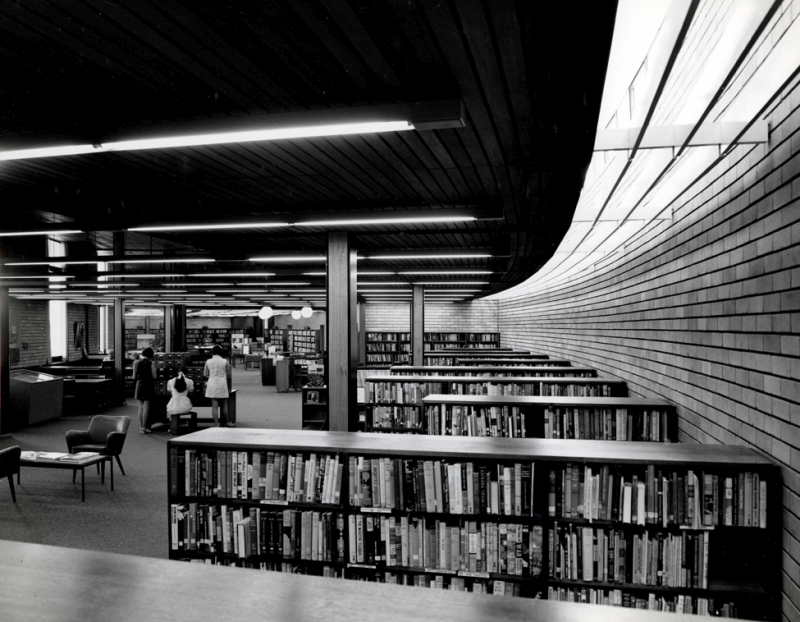 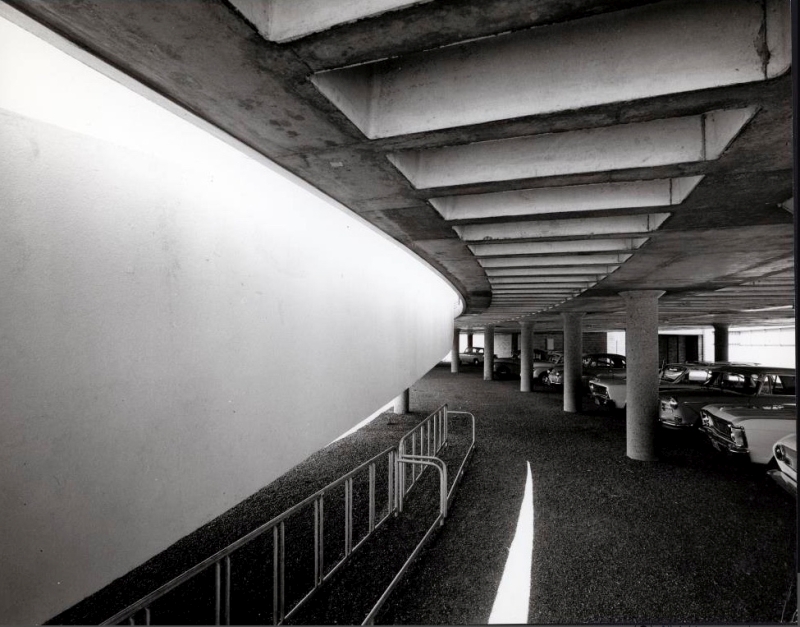 At the end of our visit to the library, we prepared for re-entry into the Earth’s atmosphere. Pausing on tiptoes at the crest of the walkway, my eyes would follow the inner arc of the building as it swept around to meet the curve of the Hunter River in the distance. I could look upstream and see the outlying fields of farmlands, close to our new home.

Max Dupain’s high contrast photographs of Maitland Library capture the dynamic form of the building and show its perfect integration of exterior and interior design. Seeing these images now lets me appreciate the staged approach to the building from outside to inside: the building’s design urges us to look up and look further, whatever our starting point. By the time we step inside, we’re ready to encounter new ideas and pursue them.

However, Dupain’s photograph of the building’s façade also gives me pause: I’ve approached both Maitland Library and the National Library countless times, but this photograph stirs in me a vestigial recognition of the two as buildings in kind. But what kind?

In 1961, after his architectural firm, Bunning & Madden, had entered a limited competition for the commission to design the National Library building, Walter Bunning travelled to Europe, the United Kingdom, Scandinavia and North America to research library buildings and consult experts in library design. In Greece he visited the Parthenon and it famously became one of the influences for the National Library’s style. Bunning wrote that the National Library building was a modern derivation in the spirit of classical architecture. He considered the style ‘Contemporary Classical’ and observed that it was an architectural language inherent in Australia’s early colonial buildings. This style “…uses symmetry as a key design feature, with the repetitive rhythm of columns or columnar elements without bases, and carefully considered proportions. [It] features a central entrance, the use of regular bays…and a horizontal skyline.” (A different view: the National Library of Australia and its building art, page 4). 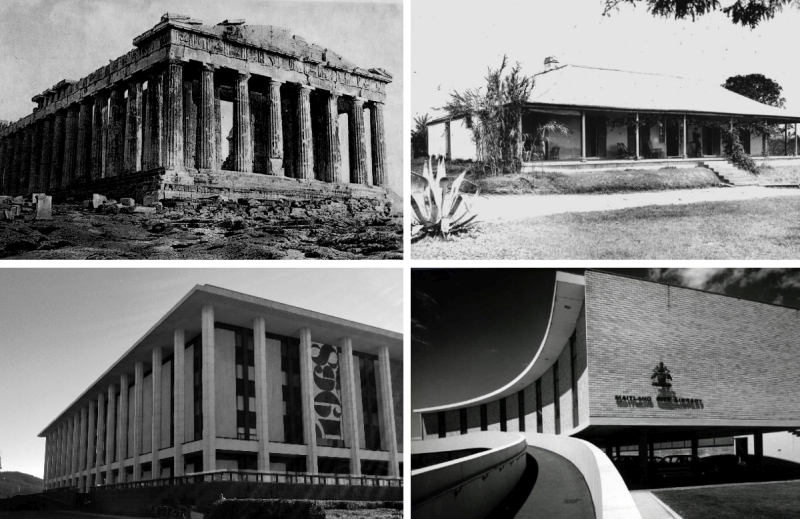 The spare, elegant, modernist lines of Bunning’s two libraries of 1968 are both expressions of this architectural language and emerge with their own bold simplicity.  But the measure of a stimulating, working library space is also whether our experience of the exterior form spurs us to creative action inside.

When I approach the National Library, I regard its disciplined proportions, its balance and symmetry, its repetitions and rhythms. I may see the chimera of a temple; as a classicist, that’s a vicarious thrill. But even more thrilling is to be able to walk inside this working “temple” with extant interior, a space that was considered and planned in reference to its external form. Once inside the Main Reading Room I see warm light and soaring space. When I’m responding to an Ask a Librarian enquiry, I pause and look up to let my eyes trace the length and breadth and height of the room. My thoughts, thus stretched to fill the space, can return to their task.

“In designing a building one walks through it. When you’re creating the thing on paper, you’re at the same time putting yourself in the picture.  You’re putting yourself in the position of the viewer, or the person walking through. So that long before I ever walked through [the National Library], I was able to tell you every room and every space and how it would feel and how it would look.”

Bunning’s library spaces give our thoughts room to stretch and grow, and that’s important. If a person wants to ask a question for the first time, make a contribution to scholarship or assist others to pursue their research interests, they should feel buoyed by the volume of their library’s felicitous geometry.

Walter Bunning walked through his buildings in future time; now I walk through his Maitland Library in past time, with my mother, and I am four years old again. The reference desk is a long, highly polished curve of dark, fine-grained wood, running parallel to the building’s inner arc. I’m not tall enough to see over the desk, so I run my finger along its curve. Long, sustained thoughts measured by a fingertip. Then I stop. Something is different. I look up at my mother - she is suspended in joy. I can’t see the Librarian, but I can hear her voice above me as a stack of books glides across the polished desk towards us. My mother had asked for help. A Librarian had listened and found books in storage and in other libraries far away, and one from the very biggest Library that held the only copy. Now they are here, in a precious pile on a curved desk in a curved library that had invited us to look upwards and pursue wonder. I can still feel that moment, when my mother started to find herself anew. It was her future. It was my future too.

Walter Bunning’s two libraries of 1968 are forever bound in my experience. Today I’m a reference librarian at the National Library. If you come to a reference desk for help, you might see me standing behind it. But in my mind’s eye I’m standing on the other side, with you, waiting for you to find joy in the infinite possibilities that attend the space around us.

I thank Maitland City Librarian, Keryl Collard for permission to use the Max Dupain images and library staff Peter Woodley, Ann Waldeback and Judy Nicholson for their support and providing access to Maitland Library archival materials.