Thanks to the generosity of donors during the 2018 appeal, preservation work continues on the extraordinary collection of PROMPT theatre scrapbooks in the National Library’s collection. In Part 2 of this blog, Director of Preservation Services Vicki Humphrey writes about the structure and integrity of home-made albums. She writes:

The condition of the scrapbooks varied. Most were in some form of album, but the album structures varied across the collection.

Albums, like other books, are three-dimensional working structures and their structural integrity has a considerable impact on their functionality. Albums vary from other books, in that the insertion of additional material is intended and expected. However, if the album pages are weaker than the inserted material or the bulk of the inserts places strain on the album structure, damage is likely to occur over time as the album is used. Obviously these albums were much loved and well used.

Some of the scrapbooks had inserts that were single sheets that were fully stuck down. These were the easier to treat.

Others had pamphlets that had been stuck down to the scrapbook pages. In cases where there were a lot of these on multiple pages, the album structure was under considerable strain.  Furthermore the pages of these albums were carrying a lot of weight and many were torn, especially where they flexed near the spine as the pages were turned. In many of these cases, conservator Kerry McInnis needed to repair the tears so that they were not further damaged during the digitisation process. 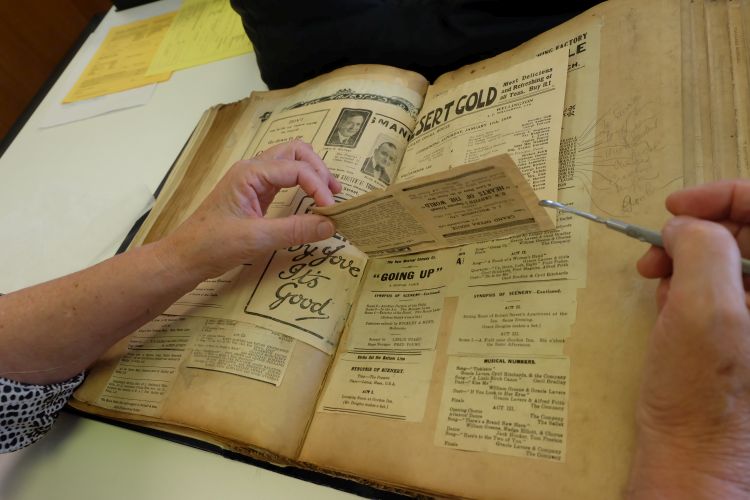 Conservator Kerry McInnis prepares to treat a split that has formed in the paper where it has been folded and unfolded repeatedly.

A number of scrapbooks had items that were pasted down but also had fold-ups to fit the insert into the book.  Some fold-ups were meant to be read on both sides, whereas others were only mean to be read on one side. However, some had been lifted and pulled away from the album page, presumably in attempts to read the reverse side, leaving the insert damaged. Folded paper will eventually split along the fold if it is folded and unfolded regularly. Kerry repaired splits and in some cases created new folds, supported by repair tissue to protect already damaged inserts.

Each album, each page, each insert had to be assessed individually and decisions made about the type and level of treatment required to stabilise them in preparation for digitisation.

Read Part 1 of this blog.