The National Library of Australia has an impressive collection of Francophile (French related) resources that would make le chat noir’s hair stand on end! So with the advent of Bastille Day, on Sunday the 14th of July, I thought it would be an opportune moment to share Francophile items from the collection with you so you too can unlock your hidden French-ness.

The collection of Francophile material spans a period of more than 200 years and covers a wide variety of subjects such as France, French culture and civilization, the Francophile universe (inclusive of the Americas, Asia and Africa), French exploration into the southern oceans and, most importantly, the intersection between France and her people and their long-lived relationship with Australia.

For this blog post, I have compiled some of the collection items that I find most interesting. You will find here a list of 10 great resources - although I could have chosen 50! My selection for your enjoyment includes titles relating to: French demographics and French lives in Australia, formed collections containing Francophile material, rare books, French plays, French eResources and bilingual newspapers, maps of Australia by French cartographers, colonisation and anthropology, French Revolutionary pamphlets and ephemera, food (!) and French cooking/food history, literary biography, French language acquisition and reference material. In no particular order, I hope you enjoy this handpicked selection of items!

In addition to this list of top 10 resources, I have created a user list through the National Library of Australia’s catalogue, titled Heather (SOL) Groves's "A la française: French resources @ NLA" list. There you will find other titles that didn’t make this top 10 list but nevertheless are some very interesting items and I highly recommended them.

Ok so let’s dive in! Allons-y! 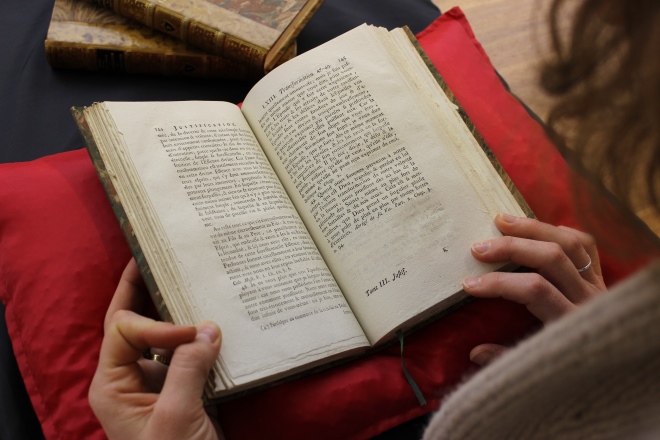 As the title of this book suggests, French in Australia is a great book for anyone wanting to learn more about the origins of French nationals migrating to and calling Australia home.

Anny PL Stuer, the author of this study (published by the Department of Demography, Institute of Advanced Studies at the Australian National University) seeks to answer the questions about who, why, when, where and how French people immigrated to and settled in Australia. Her study gives us an interesting insight into the history of French people in Australia from the mid-19th century- with the advent of the Gold rush in the mid-1800s and all the immigration it precipitated, up to the 1970s. This book also takes a brief look into very early French settlers and migration as far back as 1788.

Although French in Australia was published in 1982, it serves as a continuous and relevant resource for anyone interested in better understanding the origins of the French in Australia. Far from a dry read, this book covers everything from convicts to settler wine makers, barbers to pastors and tradesmen, farming, entertainment and newspapers, just to give to a taste of how comprehensive this book is!

The National Library of Australia has a number of formed collections; in other words, collections of items that were acquired by the Library and kept in their original collection. The Mauritius Collection is one of these collections.

The collection, which was acquired in 1968, contains a selection of French and English language works published over three centuries. With some Mauritian Creole texts, including catechisms and gospels, the list of what you might expect to find goes on and on: some 2100 books, pamphlets, government publications, reprints from scientific journals, tourist booklets and magazines. One of the standouts of the collection is an edition of François Chrestien’s book of fables, Les essais d’un bobre africain (1831), written in both Creole and French. 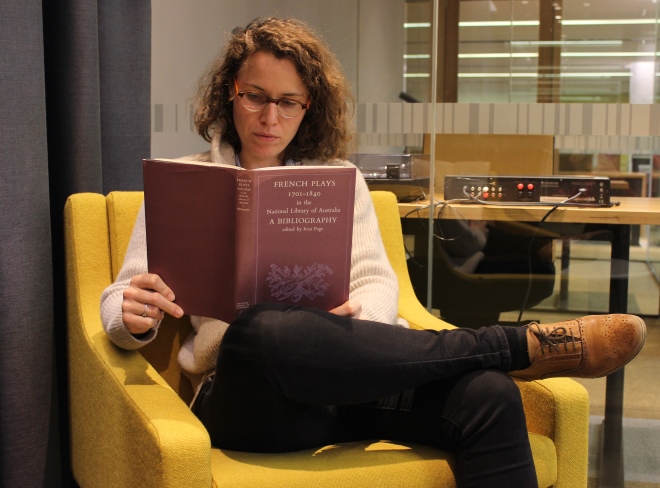 At the National Library, there are two collections of French plays; the first acquired in 1963 and the second acquired between in 1976 and 1977. Together, the two collections contain 2457 plays published in France between 1701 and 1840. Interestingly, the collections include tragedies, comedies, historical dramas, vaudevilles, comic operas and operas. You will also find a small number of French translations of English and German plays, including works of Shakespeare.

A long list of authors can be found in this collection, they include:

For anyone interested in literature, France and French history, pre-Revolutionary or Revolutionary France, the French Revolutionary Pamphlet Collection at the National Library will be just what you’re looking for.

The French Revolutionary Pamphlet Collection includes approximately 11 000 pamphlets, tracts, reports, addresses and speeches, published in France between 1787 and 1799. This consists of 2590 anonymous pamphlets, 4230 pamphlets by named authors, 392 documents on the trial of Louis XVI (procès du Roi), 3659 legislative documents and 180 other items. An additional 390 pamphlets relating to the French colonies during the French Revolution and microform of French pamphlets held in US libraries.

The collection includes a large number of lively, controversial and satirical works, which give a vivid documentary impression of the Revolutionary period.

The Jammes Collection is a curious collection of rare books and printed documents assembled by the antiquarian French bookseller Paul Jammes (1890-1983) and acquired by the National Library of Australia in 1968. The full collection comprises of 916 lots (most of which consisted of single works but some of which were made up of a number of related documents). The intriguing thing about this collection is there are a large number of books, pamphlets and commentaries that had been condemned and suppressed by ecclesiastical and civil authorities. The other part of the collection relates to Bulls, Censures, Arrests by the Conseil d’Etat, Mandements and other instruments used to suppress books and pamphlets.

Printed inside the bibliography there is a great quote. Loosely translated it reads, “The notion of book-banning is good for one thing: it allows the booksellers to ransom the public and to turn a quick profit”.

I love this quote because it gives a great sense of the tone of the works you’re likely to find in the Jammes Collection. This particular quote comes from the prominent German writer Friedrich Melchior, Baron von Grimm (1723 –1807) and was written in response to the censorship of the time (18th Century France) and in response to a book in the Jammes Collection, note the Voir no 813 (see number 813), Voltaire’s book L'ingenu, histoire veritable, : tiree des manuscrits du Pere Quesnel (1767).

6. French Cartographers and mapping Australia and the Pacific region 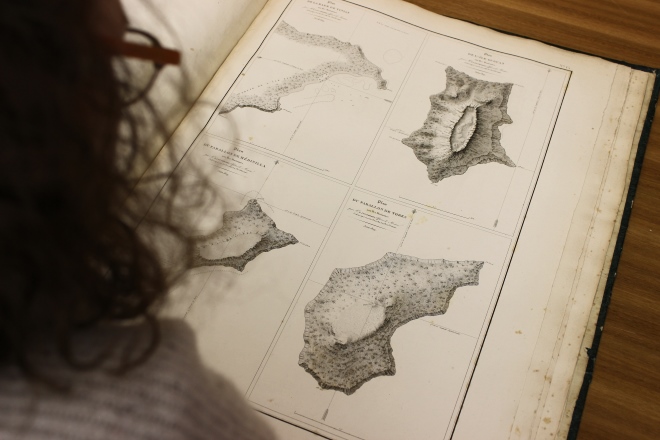 To name a few, here is a list of noteworthy names of explorer-cartographers from the first half of the 18th century, prior to Captain Cook’s arrival in Australia:
Robert de Vaugondy, Gilles, (1688-1766); Bellin, Jacques Nicolas, (1703-1772).

Tresor de la langue française: dictionnaire de la langue du XIXe et du XXe siecle (1789-1960) is one of those great resources that you can’t walk by. Yes, it is a dense sort of a dictionary and thesaurus (a whopping 16 volumes!), but it is, as the name suggests, a great treasure. The Tresor, for short, is one of those useful fundamental resources that will never get old and is as useful for French language learners as it is for French nationals and native speakers alike.

Food, food, food, glorious food. Although it is a stereotype, France and by extension, the French people generally consider cuisine to be one of the greatest joys in life both pleasurable and essential, but above all else it is a true art form. So much so that the Dictionnaire de l'Academie des gastronomes (1962) exists; this two-volume culinary dictionary gives a fascinating insight into culinary terms.

While the focus is largely on European cuisine, it’s more inclined towards a focus on France, however the dictionary doesn’t ignore the enormous contribution from other parts of the world which have been made to this discipline. This dictionary is also slightly different in that it is about describing the terms rather than a traditional dictionary where terms are defined. Le dictionnaire explores cooking terms, their etymology and the origins of the expressions with a little bit of history thrown in for good measure.

As the title suggests this publication is written in French language. It is a fascinating read for anyone interested in several centuries’ worth of food history captured in two concise volumes or simply if you are someone who has an interest in French language.

Le Courrier Australien is one of Australia’s oldest surviving foreign language newspapers, from 1892 to 2011 the newspaper was available in print format, it is has been digitised and is now available through Trove.  Le Courrier is a combination of both French and English language articles and when it started in the late 1800’s it was one of the only sources of information about news and events in France and French/Francophile events happening here in Australia. The newspaper covers a range of subjects such as science and trade, literature and fine arts, fashion, visits from French personalities, politics and events related to the Second World War and politics more broadly, the list goes on.

Le Courrier is excellent if you are interested in learning more about history as it relates to the French community in Australia, and French and Australian history generally. The current iteration of the newspaper is now a website, it covers everything the newspaper covered in terms of the subjects and you can still access the content in both French and English.

10. PressReader - eResources at the National Library

PressReader is a superstar eResource, with it you can access popular French magazines and newspapers.

PressReader has digitally reproduced the past 3 months’ worth of issues and you can create a profile, which allows you to keep track of what you’re reading, titles and even articles. The subject areas include everything from animals and pets, fine arts, craft and hobbies, fashion, design, leisure, gaming, sporting, technology, news and current affairs (including Le Figaro, Liberation and le Parisien- to cite a few well known titles), business, food and wine, magazines especially for men or women, and the list goes on. In total PressReader has 542 French language titles! To cite a few favourites, you will find ArtPress, Lire, Causette, 100 Recettes and the list goes on! With a National Library card, you can log in and view this material from the comfort of your own home.

You can access PressReader by visiting our eResources portal and searching for this resource under the Databases A-Z tab. 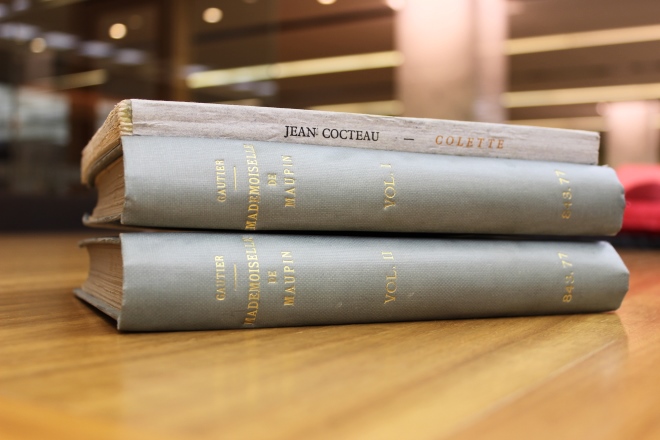 Would you like to know more about any of the resources listed here, or how to access them? You can visit the National Library of Australia in Canberra or you can Ask a Librarian and we can help find what you’re looking for.