For those of us who not so long ago lined up to vote, electoral rolls are probably a distant memory of lines, sausage sangas, and an endless sea of election ephemera (if you've still got any election ephemera, please do post it to us!).

But for family historians, electoral rolls are an ever present reality - a key resource in uncovering an ancestor’s fixed address, what said ancestor did for a quid, and sometimes for uncovering who else was living with them.

So where can you access electoral rolls? What information do they contain? Why not use a census instead? Why are there electoral rolls for years when there wasn't an election?

The answers may surprise you... 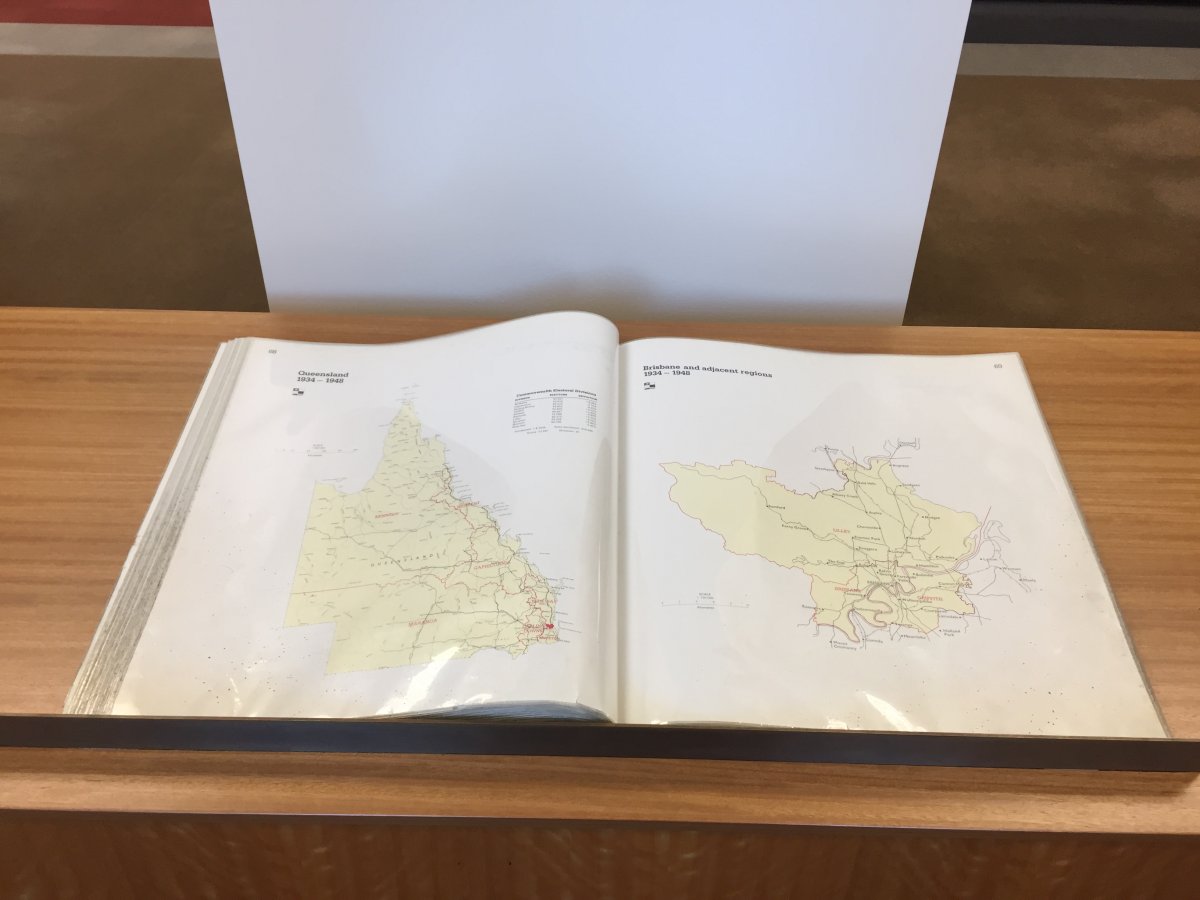 A very important book in the Newspaper and Family History Zone of the Library, which shows changes to Federal electoral boundaries over time.

With the formation of the Commonwealth in 1901 also came the need for a Commonwealth electoral roll (with the first appearing just a few years later in 1903). For a time, many Australian States continued to maintain a separate electoral roll. Eventually questions began to arise concerning the necessity (and the financial burden) of doing this, and Victoria, New South Wales and Queensland ceased maintaining a separate roll at various points in time.

You will find notices, such as the one above, regarding the creation of joint New South Wales State/Commonwealth electoral rolls in Government Gazettes on Trove.

Electoral rolls are lists of people who are eligible to vote, and who have enrolled to do so – they are not lists of people who have voted. Lists of electors were printed annually (or sometimes more frequently!). Some States such as Queensland print rolls on an as-required basis. 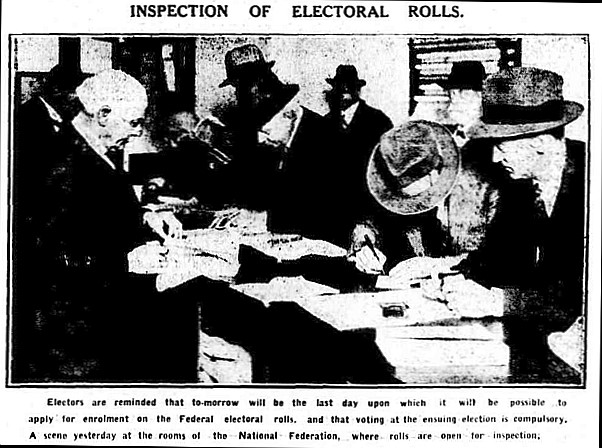 Inspection of electoral rolls in the rooms of the National Federation in 1925.

To ensure the integrity of the roll, it has always been made available for public inspection to allow individuals to challenge the eligibility of other voters. You may even find reports in historic newspapers on Trove of individuals being caught voting in a division they don’t reside in.

The current Commonwealth electoral roll is available for inspection at any Australian Electoral Commission Office.

People can enrol to vote at any time and, theoretically, an election can be called at any moment.

Be alert, not alarmed.

Very few complete Australian censuses have survived to the present.

Once the raw data was extracted from the census cards (or returns), the cards were then typically pulped. Destruction of a census was conducted under the strictest of bureaucratic procedures to ensure that the highly confidential information contained within them wasn’t exposed to the public. 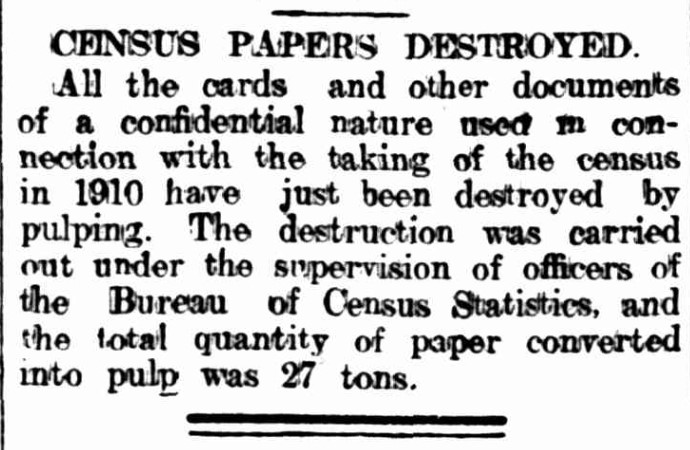 CENSUS PAPERS DESTROYED. Report from the Daily Telegraph (Launceston), 1st of August 1914. A wealth of information reduced to shreds.

Some historical censuses have survived - see the State Library of Victoria's excellent guide to historic Australian censuses - but unfortunately all that remains of the majority of censuses is the raw statistical data compiled into census reports, and nothing that can be used to identify individuals.

In the absence of censuses, family historians rely instead on historic Australian electoral rolls. 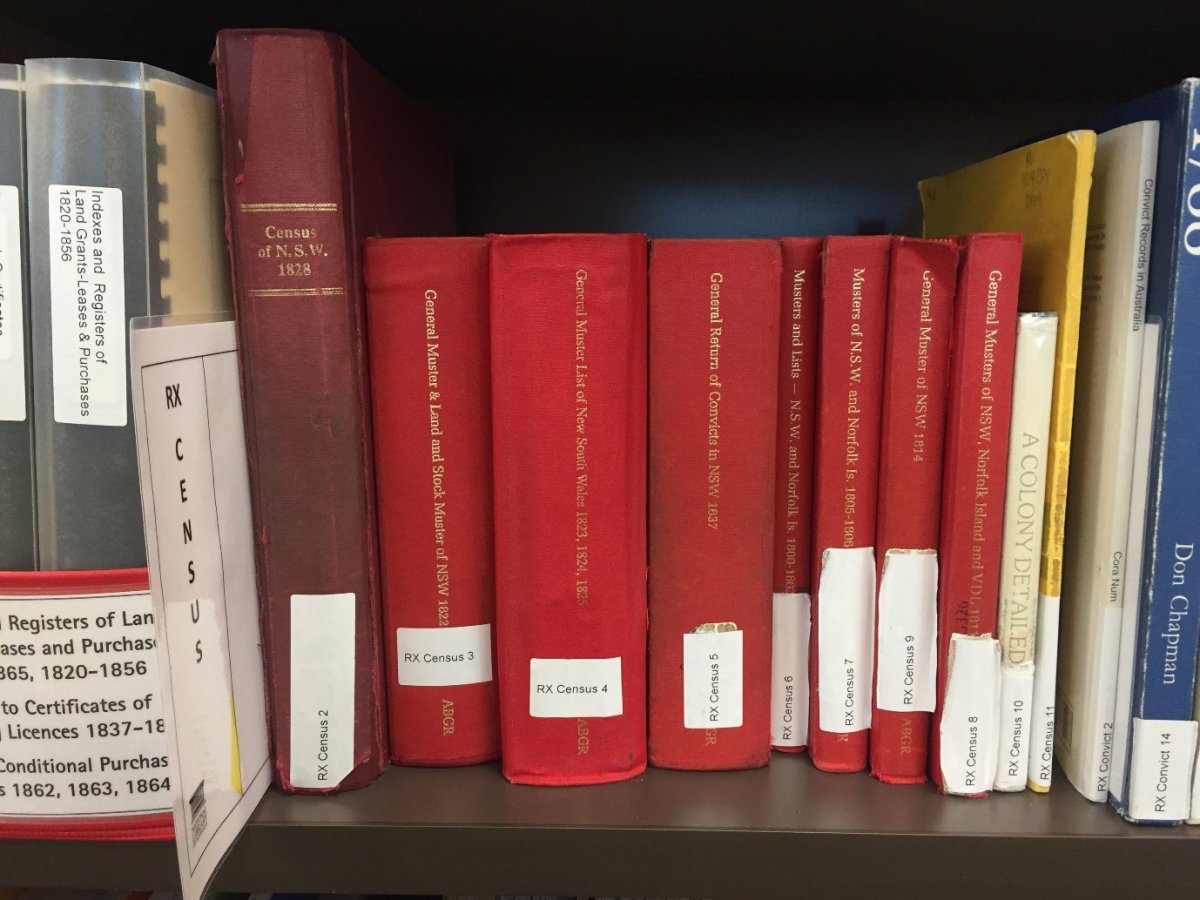 Census and musters lists in the reading room of the Library. Many early New South Wales censuses can also be viewed online via Ancestry.com.

If you want your census information retained (for the benefit of future family historians), it is possible to ‘opt in’ and have it stored by the National Archives of Australia for a period of 99 years. Read more about this on the Australian Bureau of Statistics website.

Services such as Ancestry.com and Findmypast (both of which are free to use at most public libraries throughout Australia, including the National Library) offer access to digitised electoral rolls for most States and Territories up to 1980. For those rolls which are online, you can search by name or browse through an electoral division quite easily.

You can access many historic Australian electoral rolls via Ancestry.com and Findmyast. The Library editions of both these services can often be freely accessed at local libraries throughout Australia.

But, and to repeat the great catchcry of the family historian, not everything is online. Online coverage of electoral rolls for some States & Territories is minimal – only a few years can be accessed for South Australia, and some years are missing for various States and Territories (a number of years’ worth of rolls for New South Wales from 1913 to 1930 aren’t online).

Pre and post 1990 arrangement of Commonwealth electoral rolls on microfiche.

Searching our microfiche holdings prior to 1990 can be tricky because of how the electoral rolls are arranged for this period. You do need to know the Electoral Division and Subdivision a person was residing in.  After 1990, searching the rolls is much easier because electors are listed alphabetically within a State/Territory.

You can visit the Library to access the rolls, or check if your State/Territory Library has the rolls you’d like to search.

If you can’t make it to a library that holds the electoral rolls you’d like to peruse, you can send us an Ask a Librarian enquiry requesting a look up. We can only undertake brief searches of the electoral rolls on your behalf – and we do need to know the State/Territory a person was residing in, and which electoral division to search rolls printed before 1990. 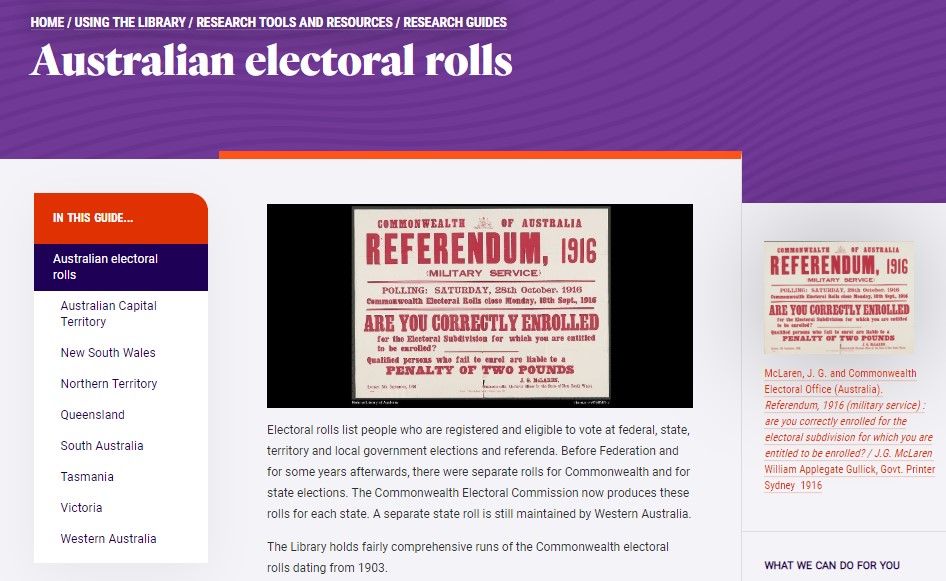 Our research guide to Australian electoral rolls provides an excellent overview of what years are available online and where you can access them.

No job and definitely no sex.

Historic electoral rolls offer up some very important pieces of information for the family historian, chiefly:

A person's sex and their occupation disappeared from the electoral rolls in 1984 when changes to the Electoral Act meant that this information was no longer prescribed (required by the legislation). Current electoral rolls only record a person's name and address.

You can read more about this decision (and the impact of it)in a Canberra Times article on Trove.

Not everyone had the right to vote...

The right to vote has often been hard won. Men with less than £200 in their pocket, Aboriginal and Torres Strait Islander people, women - all were denied the right to vote in State and/or Federal elections at various points in Australia’s democratic history.

The Australian Electoral Commission has a useful guide noting instances of electoral reform.

...And not everyone who had the right vote, did so.

Even if somebody was entitled to vote, it doesn’t necessarily mean they ever enrolled to vote.

If you can’t find an ancestor listed on the rolls, perhaps they simply elected not to! 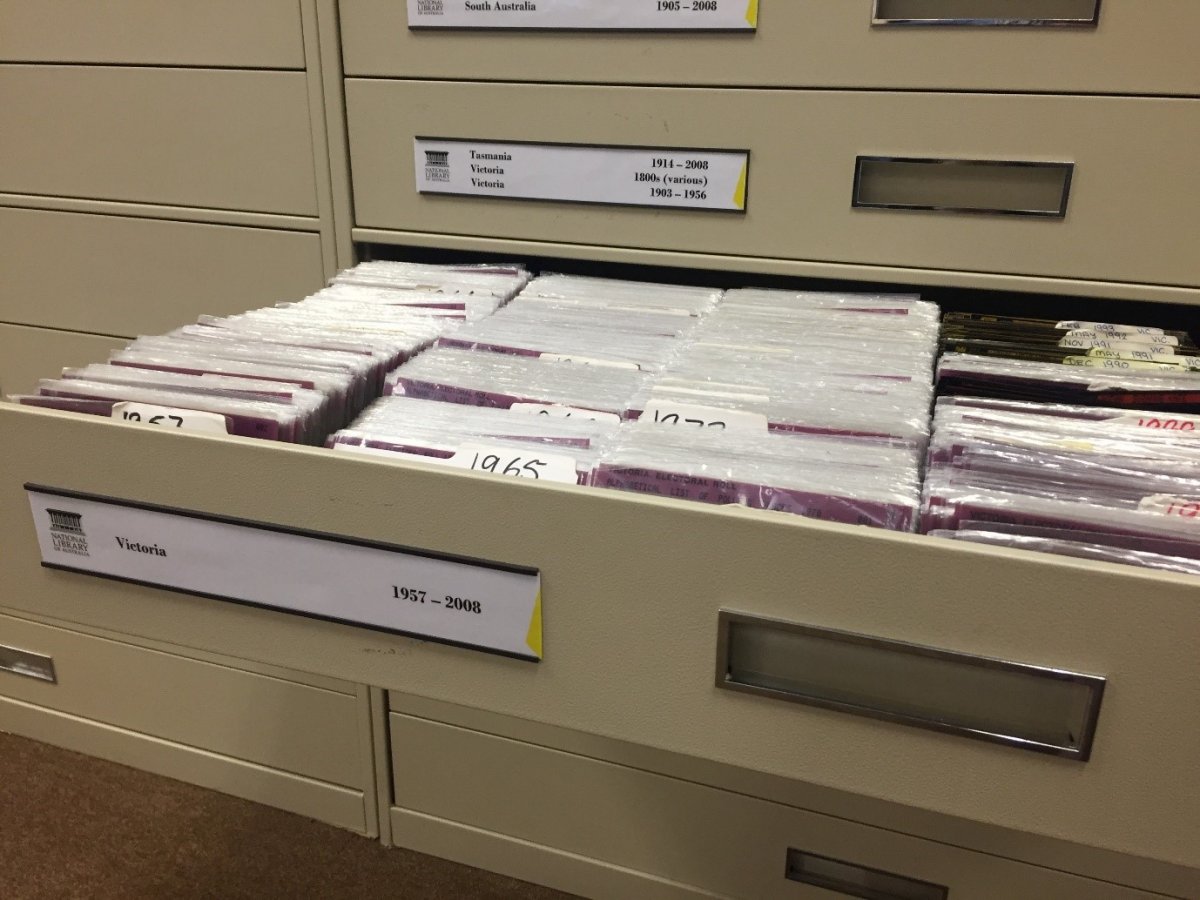 Electoral rolls - a sea of little fiche all huddled together. Read about our collections of microfilm, microfiche, as well as other microform collections, in staff member Leisa's blog 'What is a micro fish?'.